Tonight I would like to show you some charts of the HUI using it as a proxy for the big cap precious metals stocks. We will start out with the very short term look and work our way out to the beginning of the bull market that began in 2001 or so.

This first chart for the HUI is a 30 minute look that shows the latest consolidation pattern that has formed since the top last fall. This consolidation pattern I call, an expanding falling wedge, because the top and bottom blue rails are widening and falling. It started out as a small triangle, labeled with the red numbers and has morphed into its current form. Most chartists won’t recognize some of my chart patterns and will tell me to go back to charting school to learn the right way to chart. I have been doing this for 35 plus years using the Edwards and Magee Technical Analysis of Stock Trends as my charting bible. I have taken what they have given me and added my own unique style that you will recognize when you see a Rambus Chart.

I won’t get into the details right here just to say when I build out a consolidation pattern I need to see an even number of reversal points, such as 4, 6, 8 or more for it to be valid. A top or bottom needs to have an odd number of reversal points to make a reversal pattern. As you can see on the chart below the HUI is working on its 4th reversal point to the downside. The pattern won’t be complete until the bottom blue rail is hit and at that point I can call it a consolidation pattern. Right now it’s still in the developmental stage. The heavy blue trendlines shows what I think will end up being that bearish expanding falling wedge consolidation pattern when it’s all said and done as I will show you further along in this article. 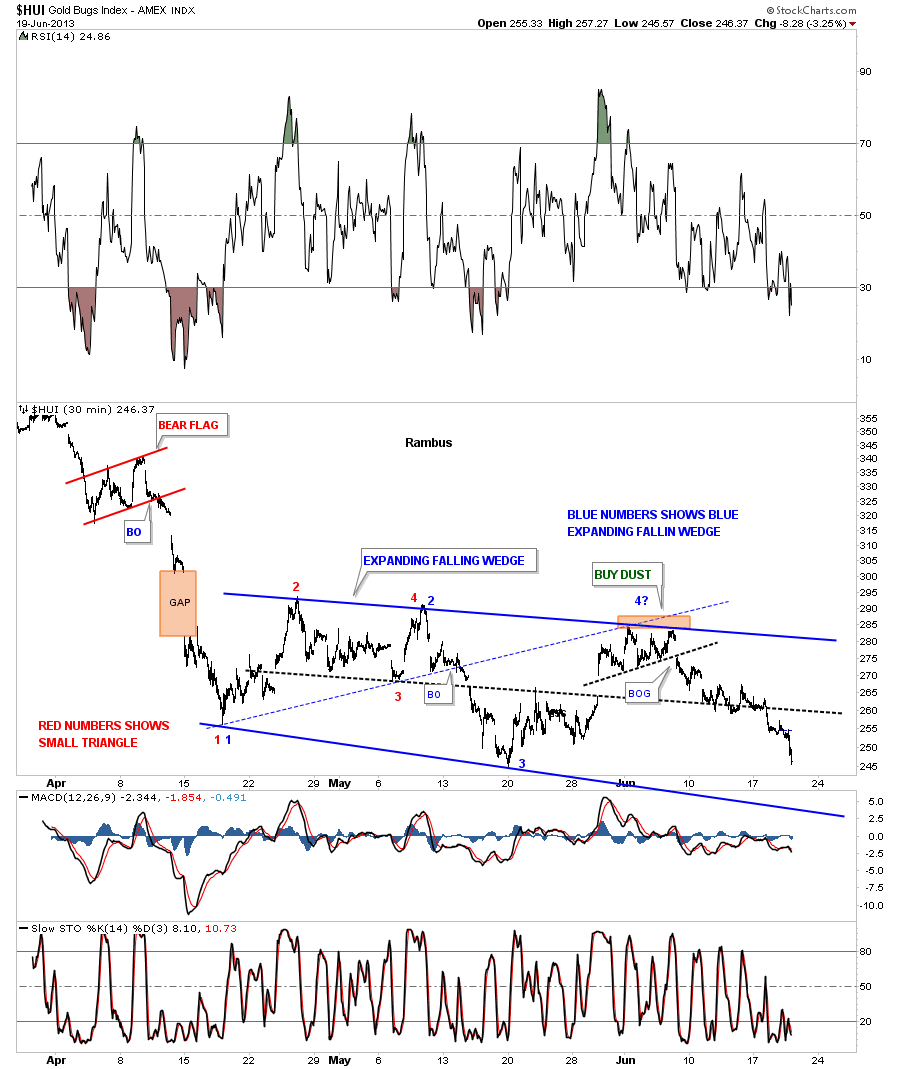 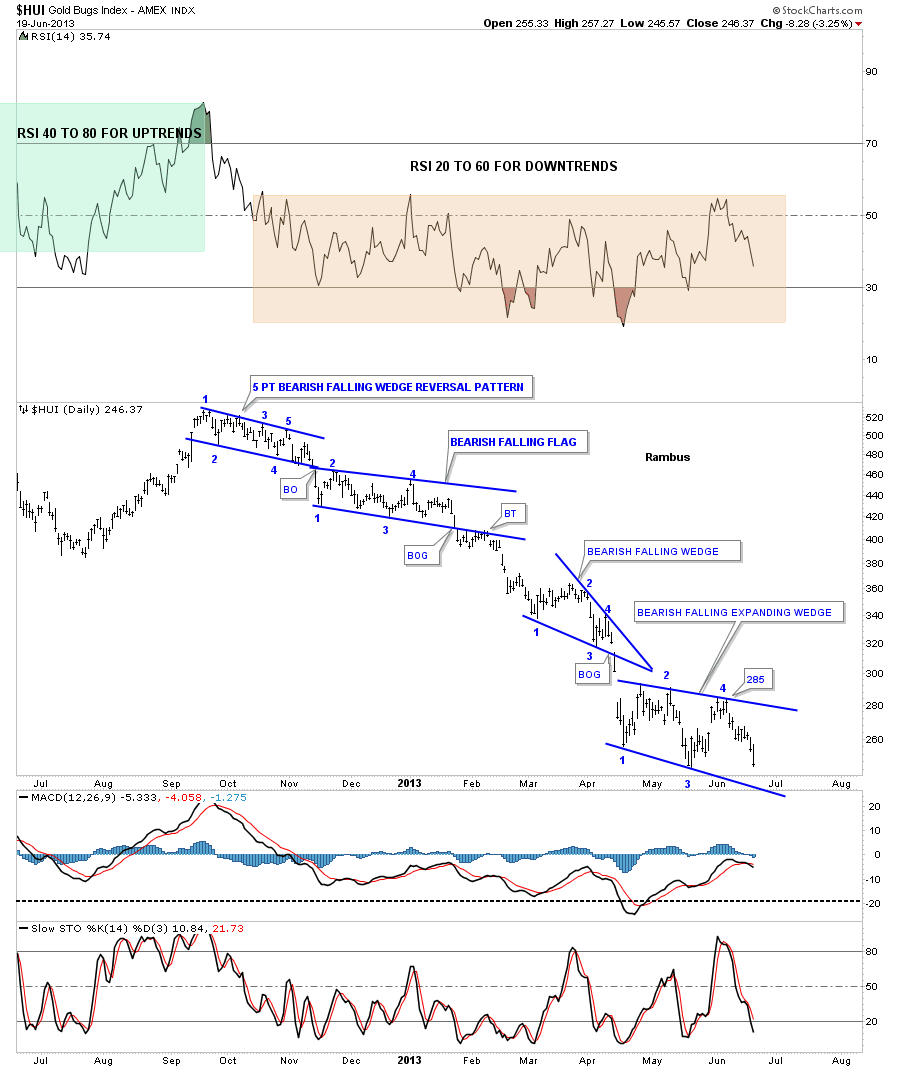 What I have shown you on the charts above is only the tip of the iceberg that just shows the right shoulder of a massive H&S topping pattern. Many times a consolidation pattern can be made up of several smaller patterns that ends up creating the finish product. This next chart is a long term daily chart for the HUI that shows the massive H&S top formation. What I would like you to note is the 11 point diamond reversal pattern that makes up the head portion of the massive H&S top. As I mentioned earlier in this article some of the chart patterns you see will only be found at Rambus Chartology. 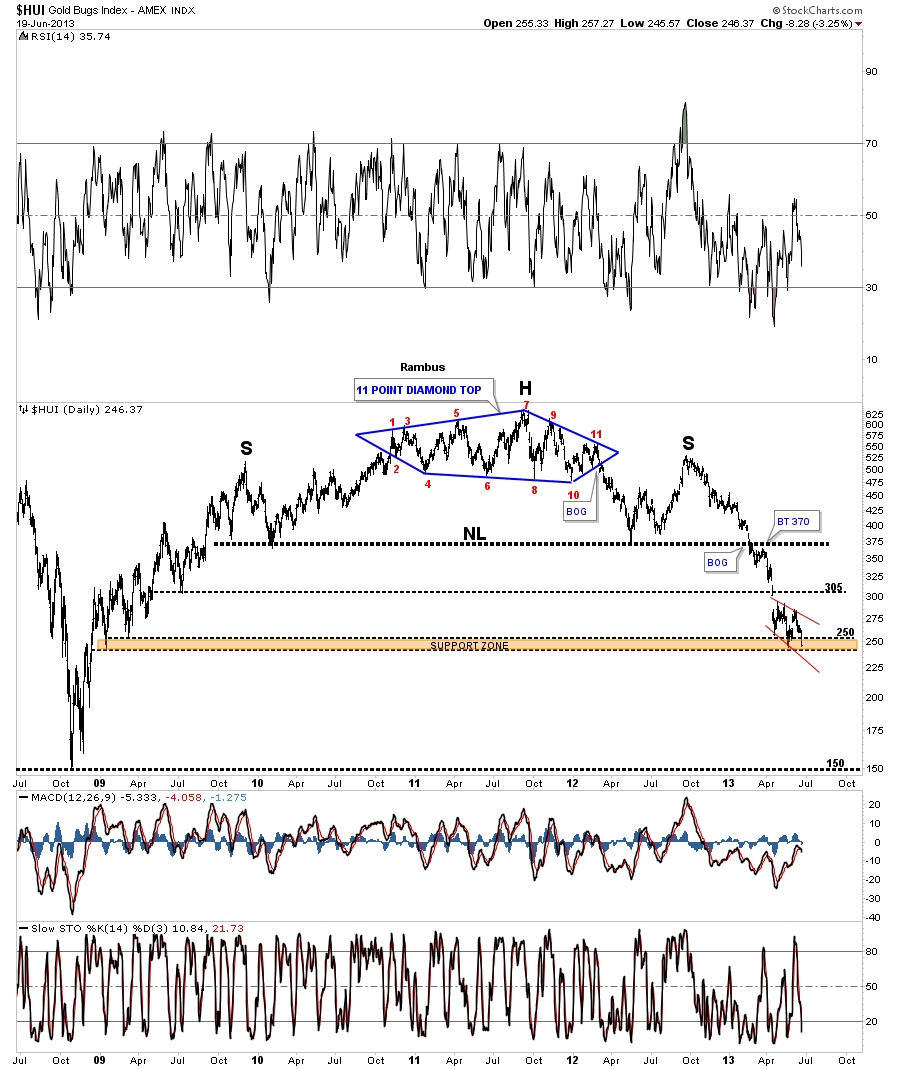 Lets look at a few weekly charts to gain a little more perspective in what has and is happening with the precious metals stocks. This long term weekly chart shows the big H&S top that has reversed the uptrend that started off the 2008 crash low. This weekly chart is a cleaned up version, of the many looks this H&S top has, so you can see it in all its glory. There is an important feature on this chart that happened about 2 months ago when gold and silver broke below their 20 month rectangles, that we’ll discuss at a later date, and that is the big halfway gap, brown shaded area. Most have forgotten about that gap but it;s going to play a big role in the price action going forward as the HUI was unable to close it. There is another important feature on this weekly chart and that is the 2008 H&S top that most missed at the time. You can’t believe the amount of  flack I took when I called that top. It was pure blasphemy to call a top in the HUI. How dare some one say something like that. When you say something the gold bugs don’t like you had better have all your ducks lined up because if your wrong your going to be a dead duck. Fortunately for me things worked out and I was spared to chart another day. 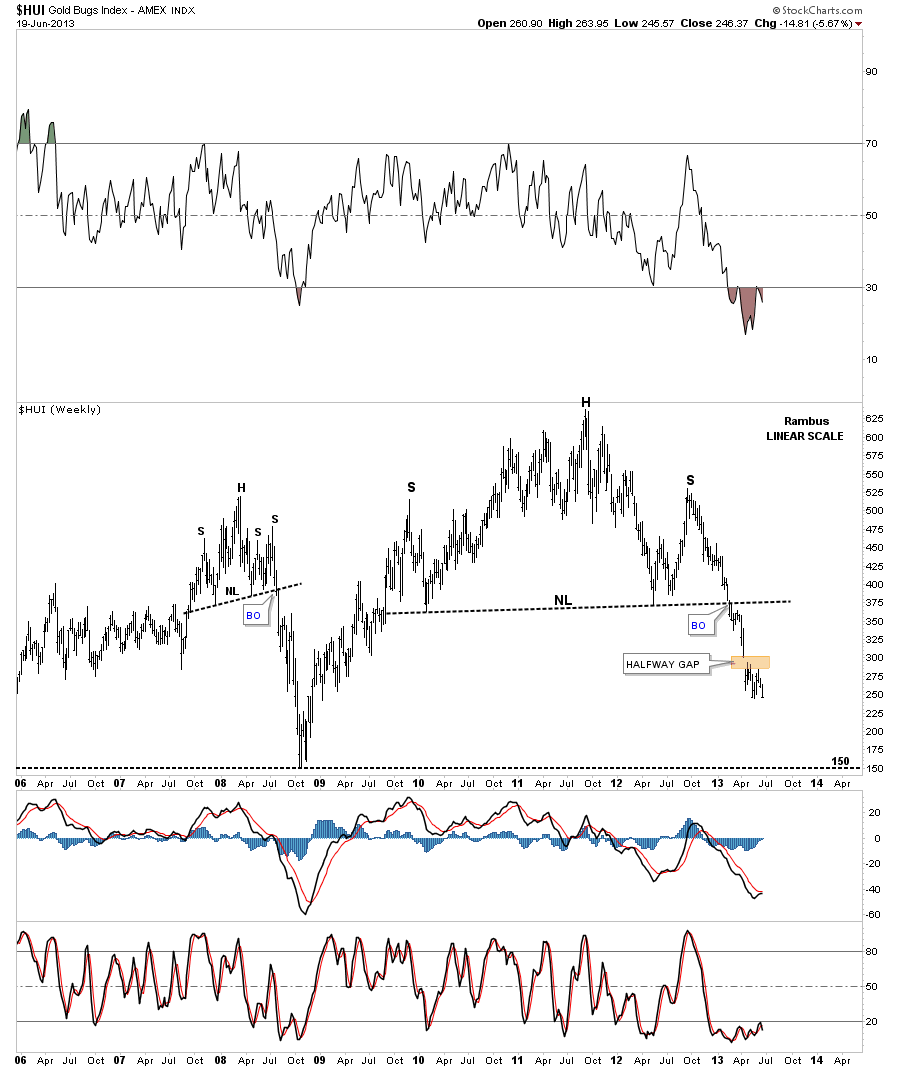 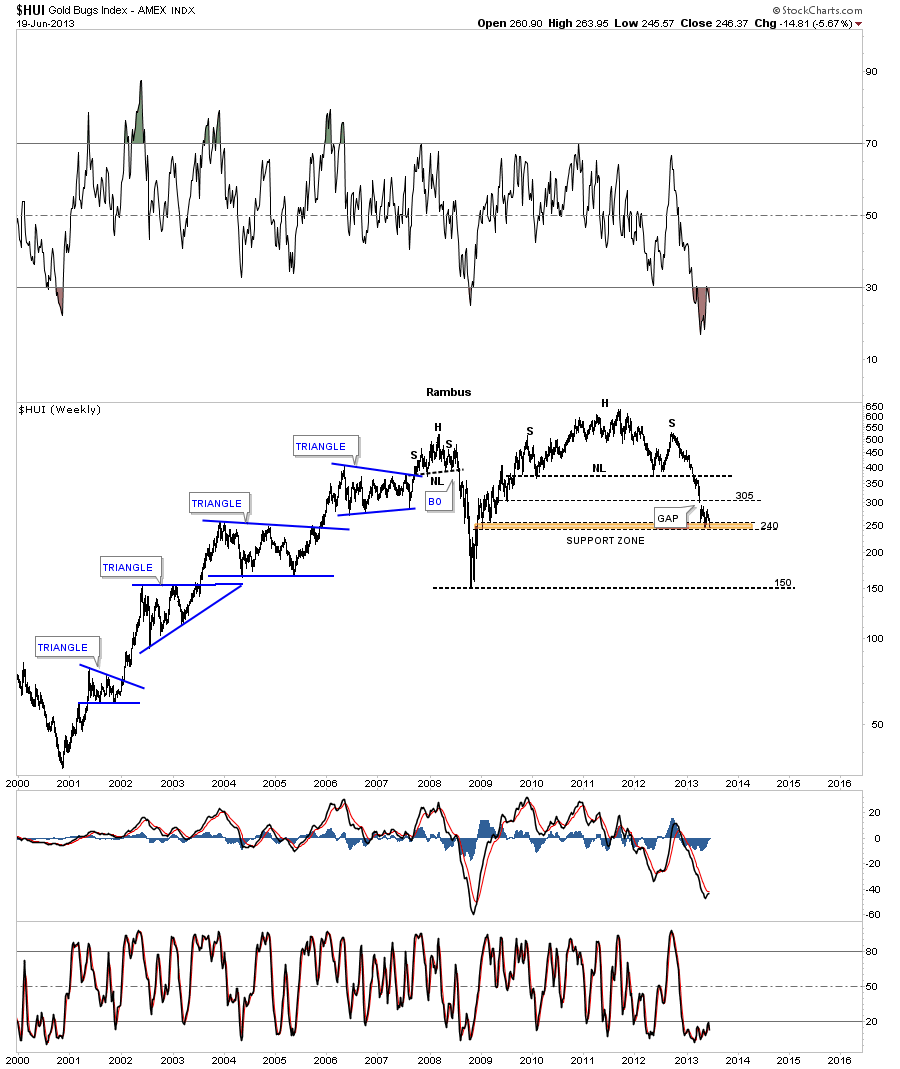 Symmetry plays a big role in how I view a chart especially in fast moving markets. This next chart shows the reverse symmetry that is taking place to the downside that is reversing the rally off the 2008 crash low. The two black rectangles are exactly the same size in height and width. I don’t know if the reverse symmetry down will be perfect and reach the bottom in October of this year but so far it has proven to be dead on the money since I first built this chart back in January of this year. Only time will tell but so far so good. 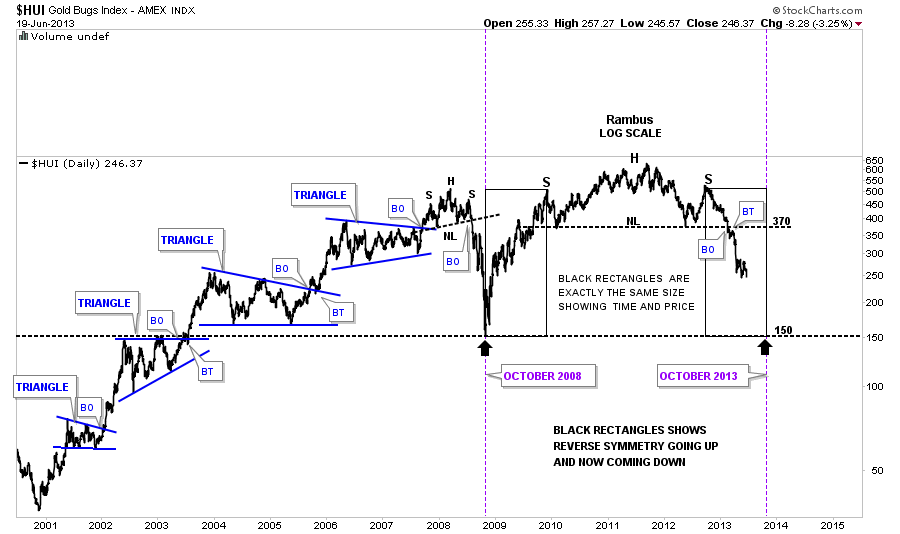 I would like to show you another form of symmetry that has to do with the halfway gap I showed you earlier and how it may play a big role moving forward. If that gap is truly a halfway gap, that shows up in the middle of a strong move, it will be confirming the October time and price objective that I showed you on the chart above. This time we are using two black rectangles that are exactly the same height and width that I’m measuring the halfway gap with. Again I don’t know how it will play out but so far its been working out better than I had expected when I first built this chart. As long as nothing is broken there is no need to fix it. So we’ll just have to see how it plays out. It is uncanny how one can come up with a time and price objective using two completely different methods. Sometimes the markets are stranger than fiction as you well know. 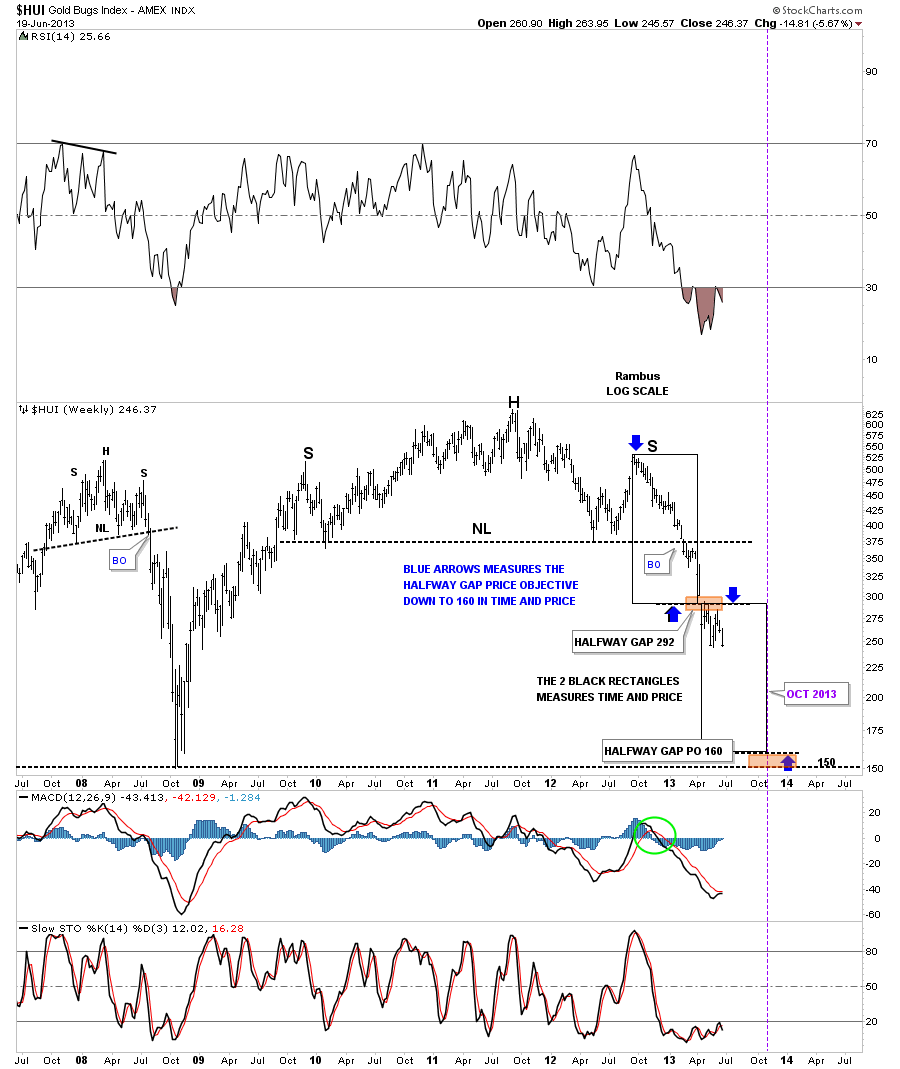 I would like to leave you with one last chart that doesn’t have anything to do with the precious metals stocks. At the beginning of this article I said there was a chart pattern that formed at the end of one of the greatest bull markets of all time. I know when some of you read that you were probably thinking ya right this guy is full of himself calling a top to an 18 year bull market. I only bring this up because chart patterns can give you the clearest view of the markets of any discipline I know. There are excellent Elliot Wave guys and cycles guys and many other forms of analysis that work very well for those that truly understand what they are doing. Charting gives me a way to follow the price action, and done correctly, keeps me out of trouble as so many in the precious metals complex are finding out again. I’m still amazed at how such an old school of charting the markets competes right up there with the best computer programs that are trying to get an edge on you.

Below is the weekly chart for the COMPQ that gave me one of the biggest clues of my life that it was time to really consider what was happening at the time. For those of you that traded during the tech bubble you know how super bullish the hype was and how hard it was to emotionally distance yourself from all the noise. Can we say the same thing about the precious metals complex right now? Only time will tell.  All the best…Rambus 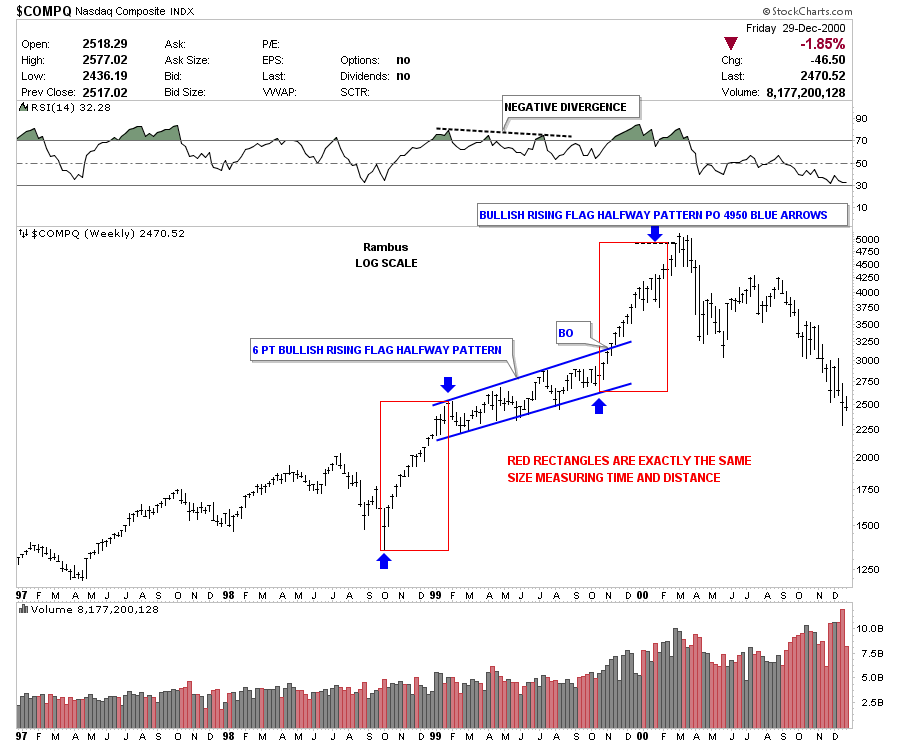 Rambus Chartology is Primarily a Goldbug TA Site where you can watch Rambus follow the markets on a daily basis and learn a great deal of Hands on Chartology from Rambus Tutorials and Question and Answers .
Most Members are Staunch Goldbugs who have seen Rambus in action from the 2007 to 2008 period … and now Here at Rambus Chartology since early 2012 .