As I promised you last night lets look at the GLDX, Junior Gold Stock Explorers etf that maybe one of the hottest areas in the markets right now. Tonight I’ll show you the two different measuring techniques I use to get an idea of where the price may move once a breakout is in progress.

The first method I call the breakout to breakout method which the name implies. You can use this method when you have a top, bottom or consolidation pattern below your current consolidation pattern. Using the GLDX we see this is the case. We have the red bullish falling wedge that formed below our current blue triangle. If this plays out according to plan the blue triangle will be in the middle between the red bullish falling wedge and the price objective up to the 19.50 area.

To measure the blue triangle as a halfway pattern I just take my fib tool and measure the distance from the breakout from the red bullish falling wedge to the first reversal point in the blue triangle, blue arrow. You do this with any consolidation pattern, whether it’s a rectangle, wedge, Diamond or whatever the consolidation pattern is. You then take that measurement and add it to the breakout of the blue triangle halfway pattern to get your price objective up to the 19.50 area.  Sometimes these measurements can be dead on the money and other times fairly close. It gives you a place to look for other signs of where the impulse move may run into resistance. In this case you can see a top that was formed last August in the 19.50 area so that is another good clue that the breakout move should go up into that area.

Note the MACD just crossed with the Histogram moving above the zero line along with the slow stoch also crossing. This breakout is being accompanied by some nice big black volume bars also. As you can see today’s price action is testing the high of the blue triangle which is encouraging. So there are a lot of positive things going on with this little junior stock index. 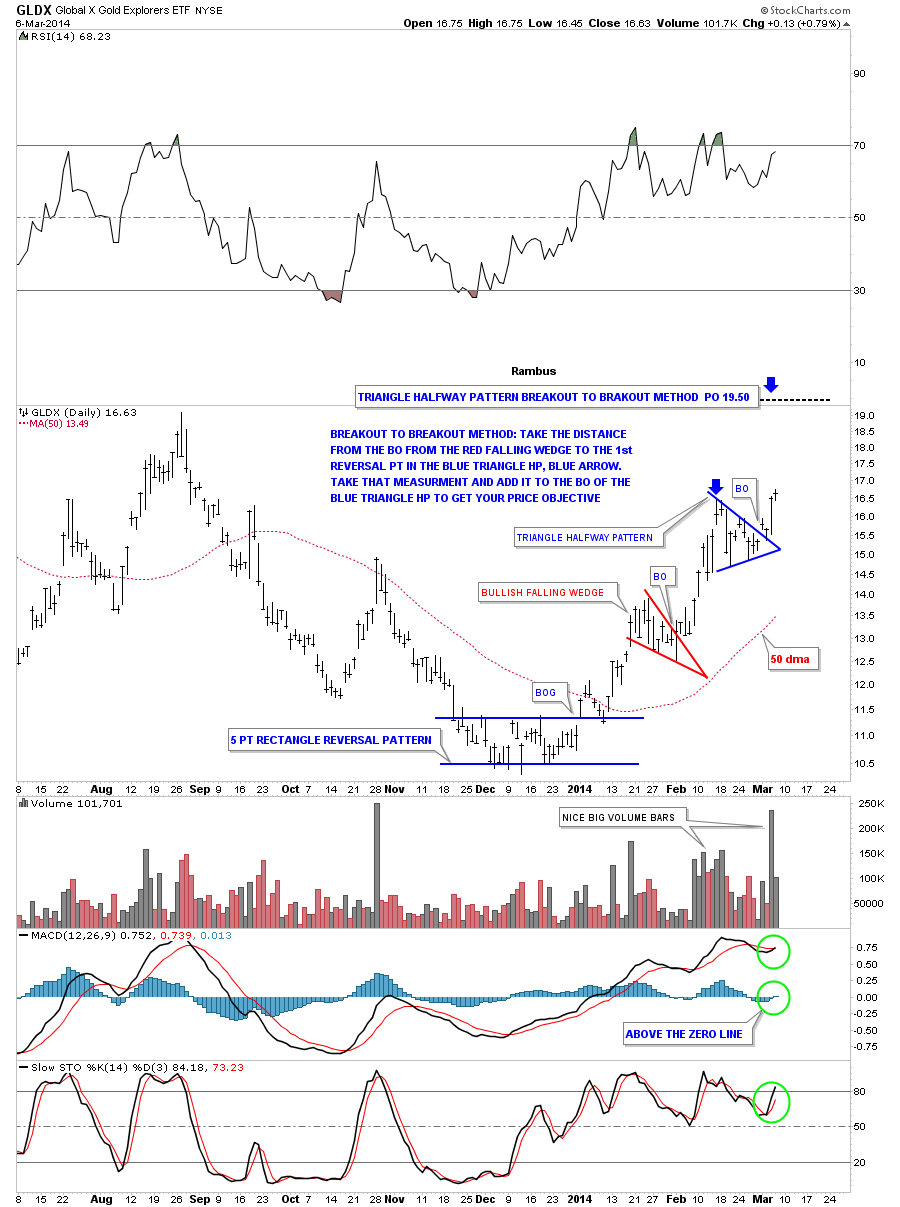 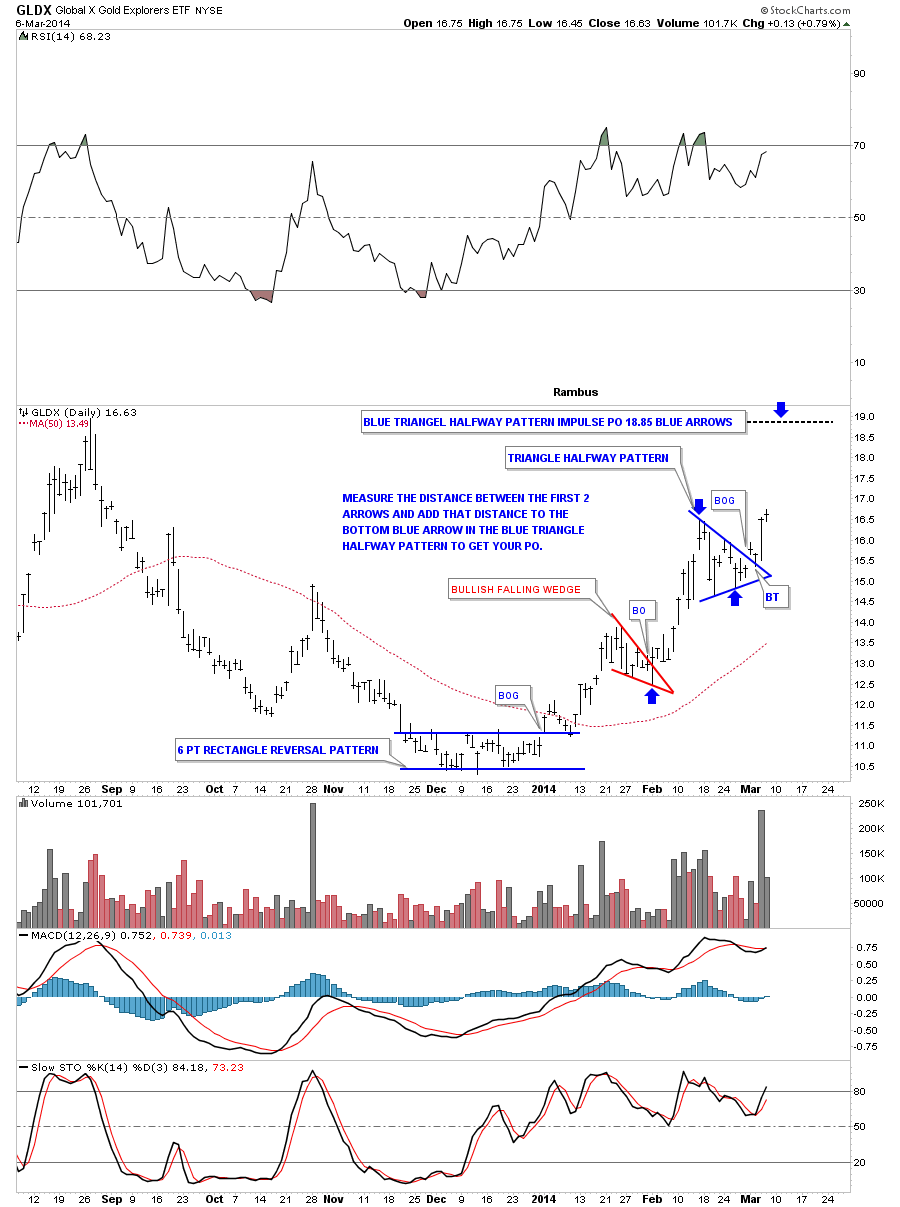 So between the two different measuring techniques we get a range between 18.85 and 19.50 with the previous high made last August also in that area gives us a place to shoot for. I know there are other measuring techniques that people use but for me this is how I like to calculate a measured move.

It’s been awhile since we looked at the US dollar that has been showing some weakness lately. The first chart is pretty cut and dried as it shows a big blue bearish rising wedge that had a clean breakout and backtest. It then went on to form the red triangle just below the bottom blue rail which as you know I view as a bearish setup. The price objective for a rising or falling wedge, many times is the beginning of the wedge. In this case the blue bearish rising wedge started to form back in the late summer of 2011 at the 73 area. You never know 100% for sure how the inter market analysis is going to play out but a decline, in the US dollar to the 73 area, could be a big catalyst for a large move up in the precious metals complex. We’ll know in hindsight. 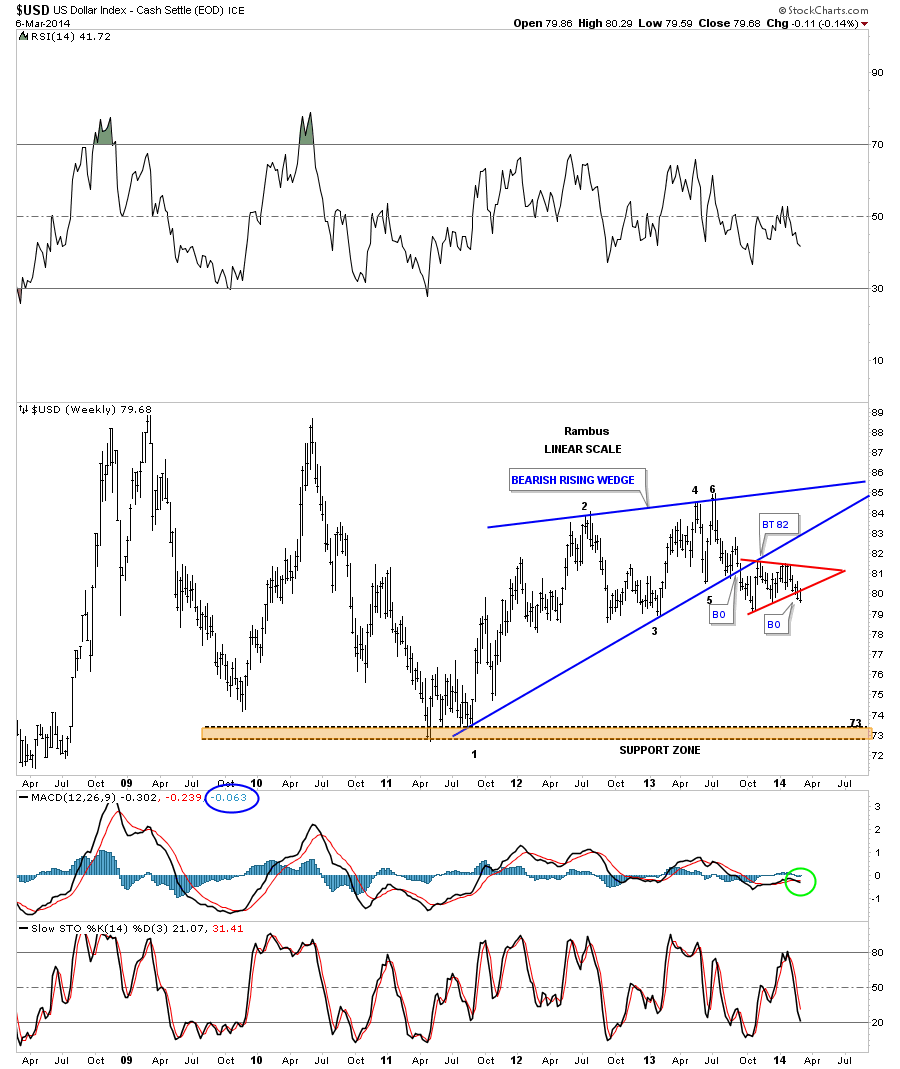 Some of our longer term subscribers may remember this big 11 point Diamond reversal pattern that formed last year. This is a very similar setup to the big Diamond that gave me a clue that the HUI was in a very large topping pattern well before the price action broke down. I view the blue Diamond as the head portion of a big H&S top formation. I’ve added a neckline symmetry rail that is just a parallel line taken off of the neckline that often times gives us a place to look for a high on the right shoulder. As you can see it nailed the height for the right shoulder. The price objective is quite interesting for this H&S top. If the neckline gets broken to the downside the price objective would be down to the 73.50. This puts the price down into the 73 area as shown by the bearish rising wedge on the chart above. Again, we’ll know in hindsight if this all plays out but for the moment this is what the Chartology is telling us. 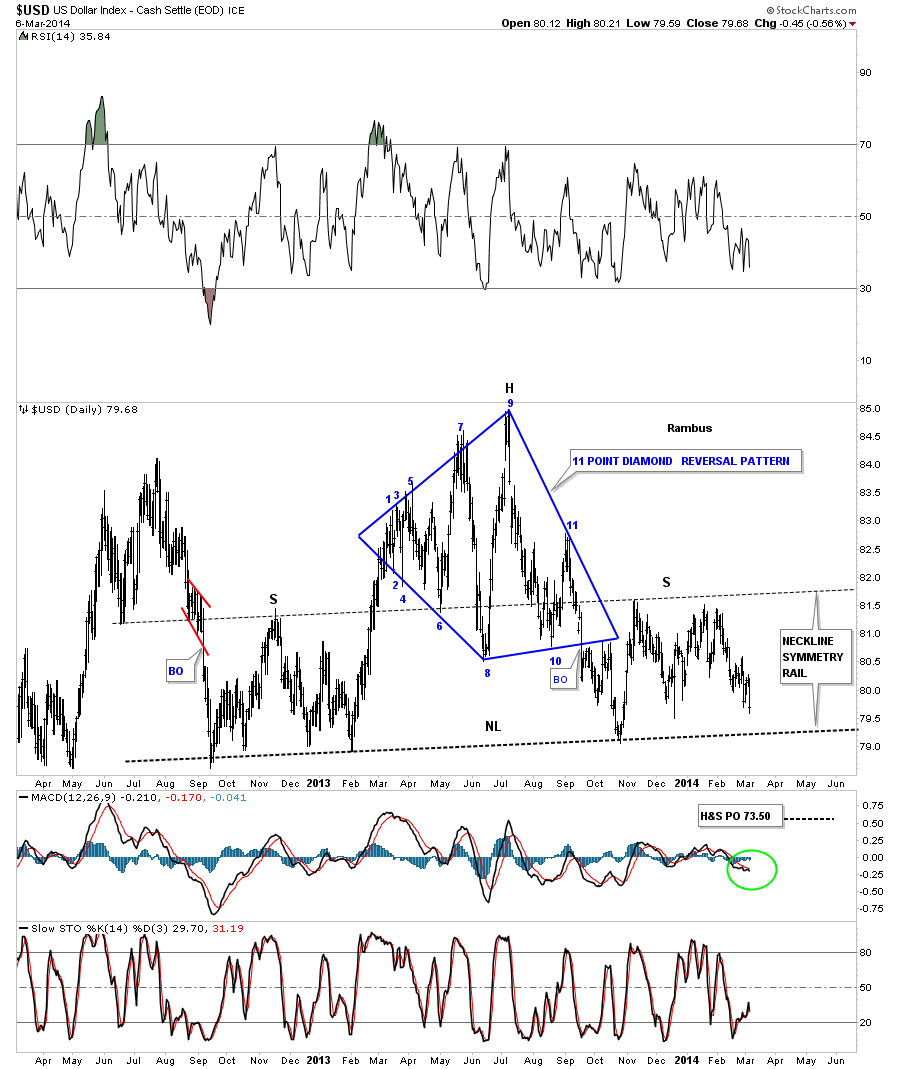 There is another area we haven’t looked at in awhile and that is the Uranium Sector. This area has also caught on fire. Lets look at the NLR, the Uranium etf, that shows the price action breaking out though the top rail of  a bullish rising wedge. This is a pretty impressive move taking place right now in this sector. 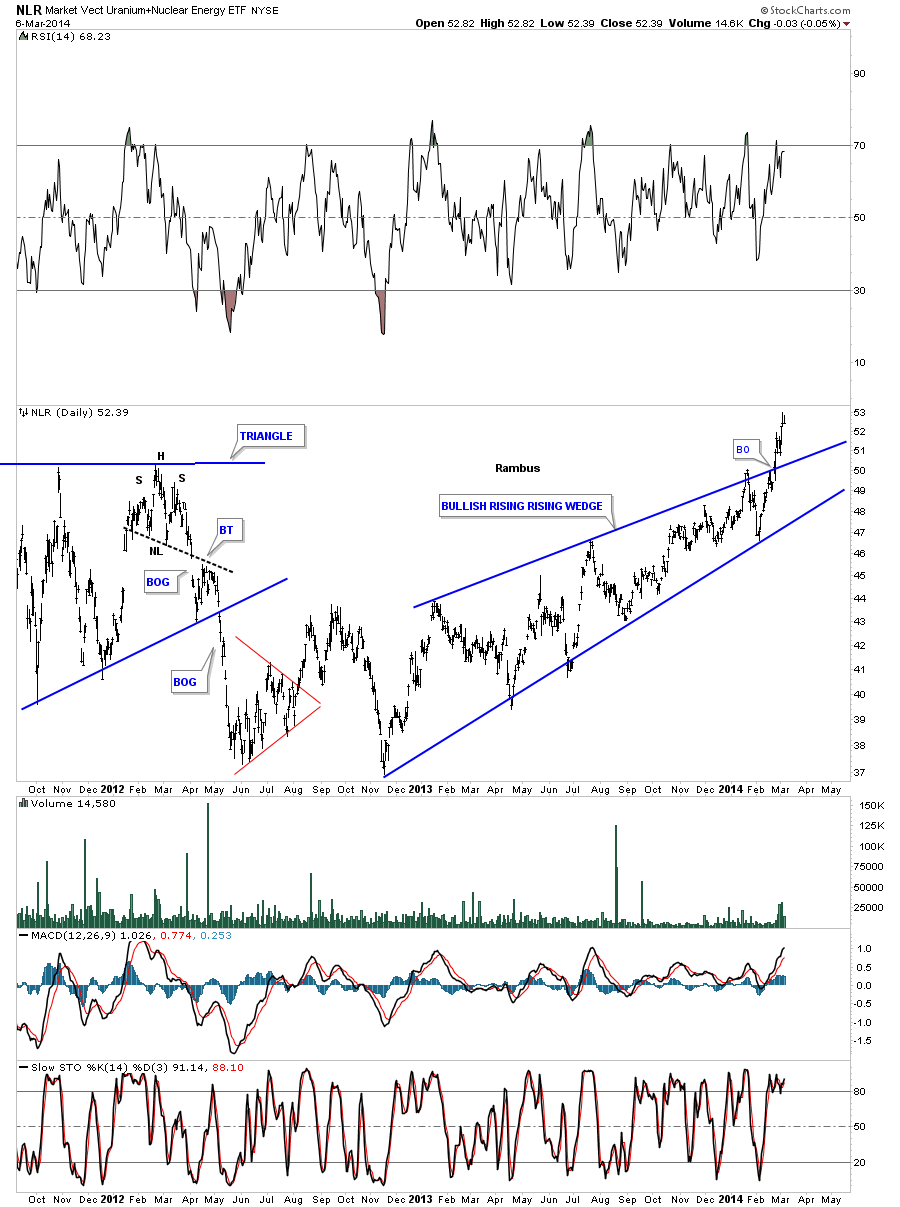 Below is a weekly chart for the NLR that shows all the chart patterns that have developed over the last 6 years. Note the big blue bullish falling wedge that broke out well over a year ago but it was a slow grind higher until just recently as prices have started to accelerate to the upside. Sometimes I’m still amazed at what the Chartology can show you sometimes before an event happens. Notice the red bearish rising wedge that had formed back in late 2010 around the 65 area. That vertical breakdown form that red bearish rising wedge was the Japan earthquake. That was the top like so many other commodities that have been in a 3 year correction that started in 2011. Three years is a nice long time for a correction to take place in a secular bull market. Maybe we’ll see inflation first and then deflation. It really doesn’t make and difference as we will be  following the price action to where ever it takes us. All the best…Rambus 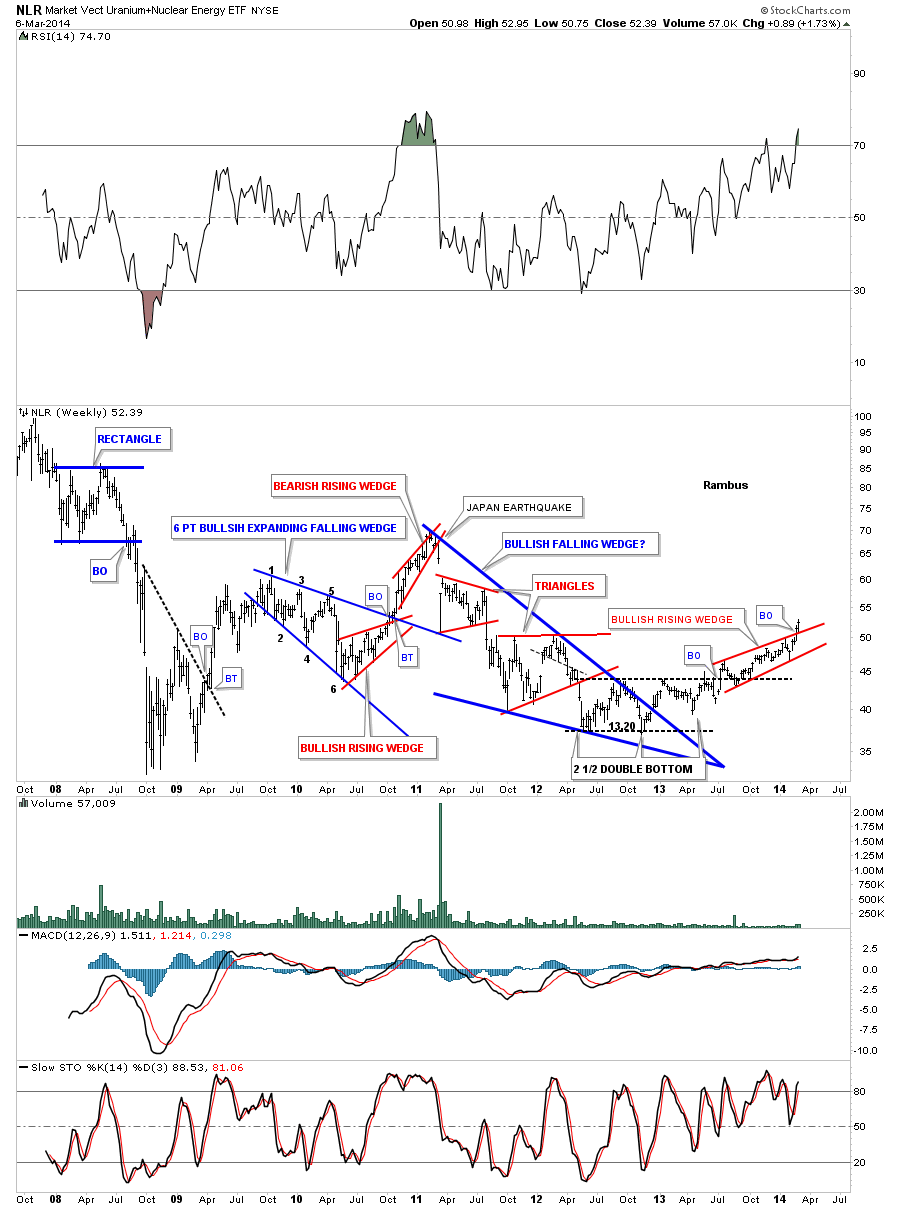