GDM bounced off the brown shaded S&R zone again this morning and is closing the big gap made on the previous decline. This morning it created another gap which will most likely be filled at some point. The 360 to 365 area on the GDM is setting up to be a very important line in the sand. As long as the GDM can stay above that S&R zone that’s positive but if it ever breaks below then the 360 to 365 will reverse it role from what is in now support to strong overhead resistance. Usually when you see a lot of gaps in a trading range they’re called area gaps and have little value compared to the other gaps like breakout or continuation gaps. The trading range continues to build out. 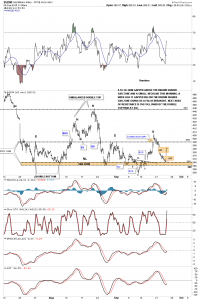