In order for the deflationary theme to play out we will need to see a strong US dollar which will affect the commodities complex and other important currencies of the world. Below is a closeup view for the US dollar that now shows the bullish falling wedge in breakout mode with one backtest to the top rail so far. 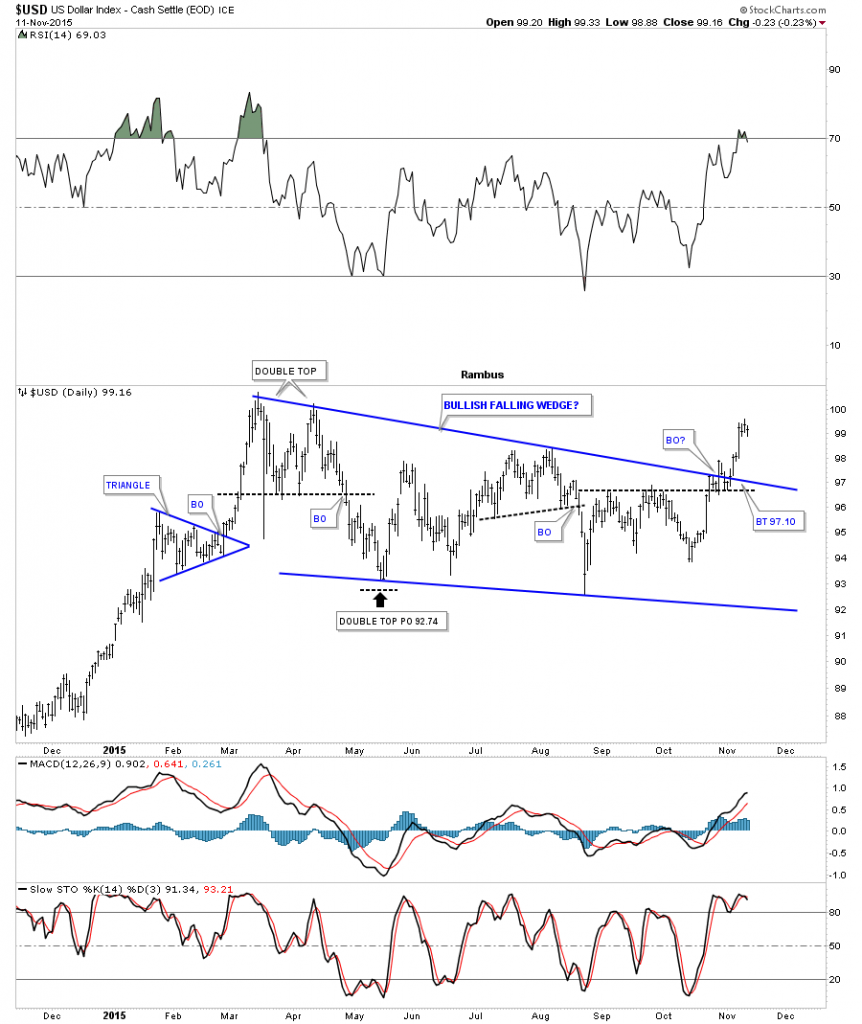 The long term daily chart for the US dollar shows its last impulse move that began in the summer of 2014 and ended in March of this year. You can see the smaller red consolidation patterns that formed during that huge impulse move up. The big blue bullish falling wedge I’m looking at as a halfway pattern separating the first  impulse move up from the second impulse move up. 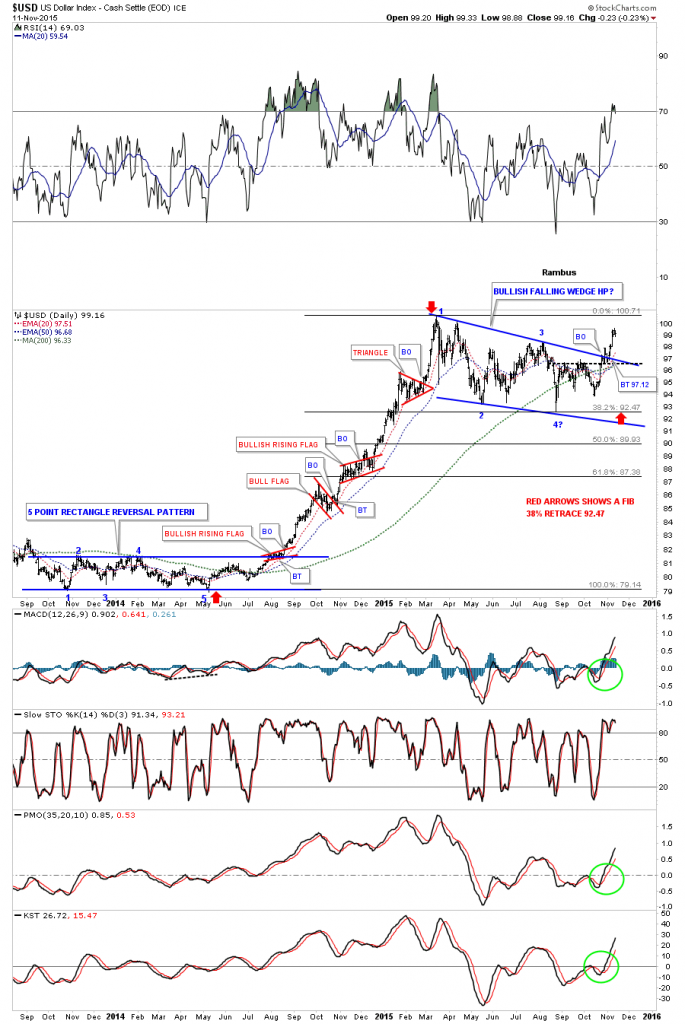 If the US dollar can close the month of November on a strong note and complete a big white candle that would be a very good step in the right direction. 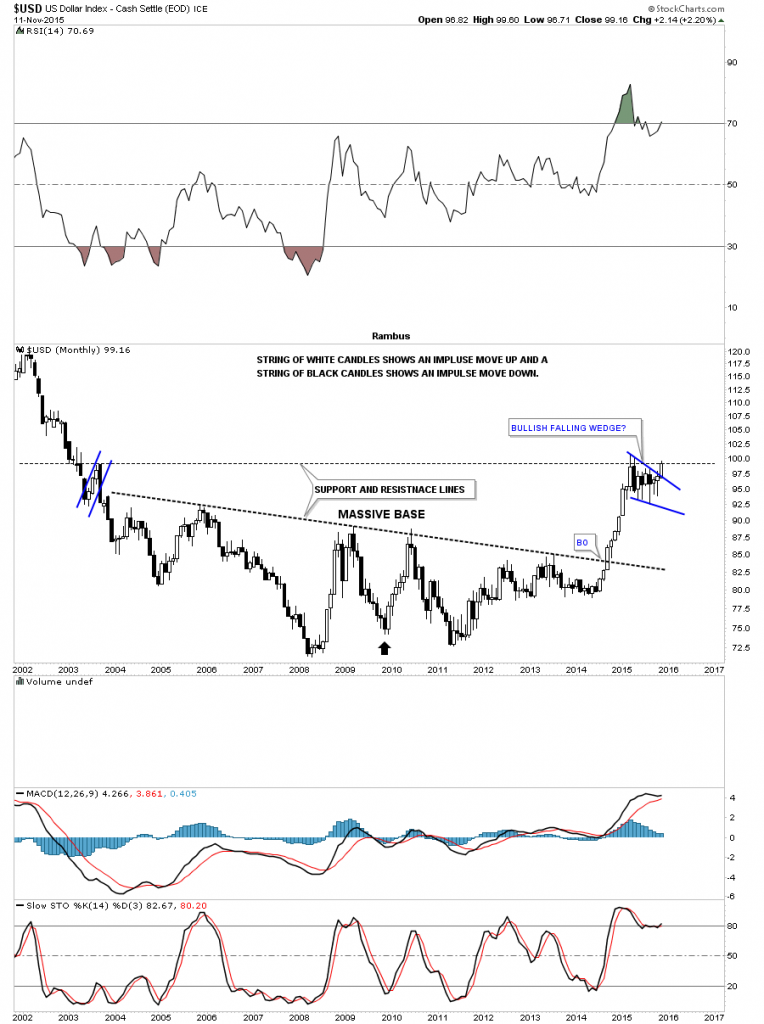 This last chart for the US dollar is another very long term monthly chart that puts the blue bullish falling wedge in perspective as it’s now showing a breakout, something we didn’t have on the first inflection point report. 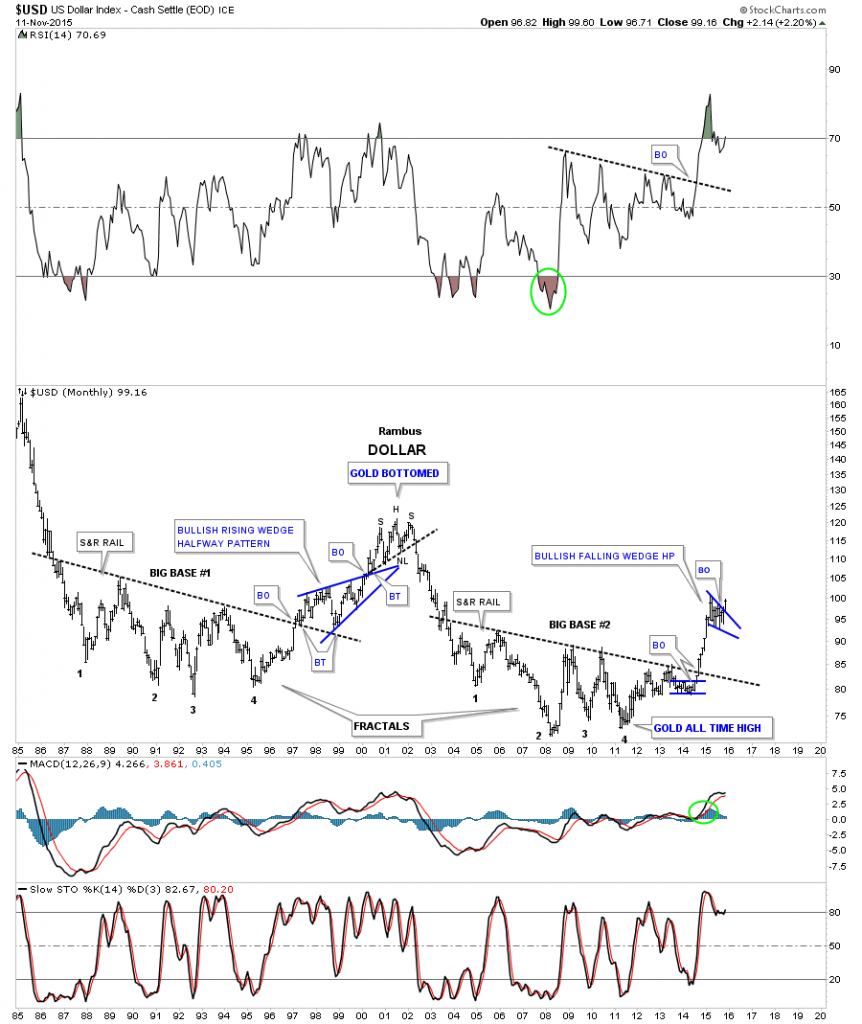 This next chart is a combo chart that I believe I only showed you once before back in 2014. This combo chart has the $USD:$XJY ratio on top and gold on the bottom. What this chart tells us is that when the US dollar is out performing the $XJY gold is generally weak. As you can see the ratio chart on top is just now hitting a brand new high while gold on the bottom is almost hitting a new low for its bear market on a monthly closing basis. The two red arrows shows where the ratio chart and gold came together in 2011 which was the start of the bear market for gold. 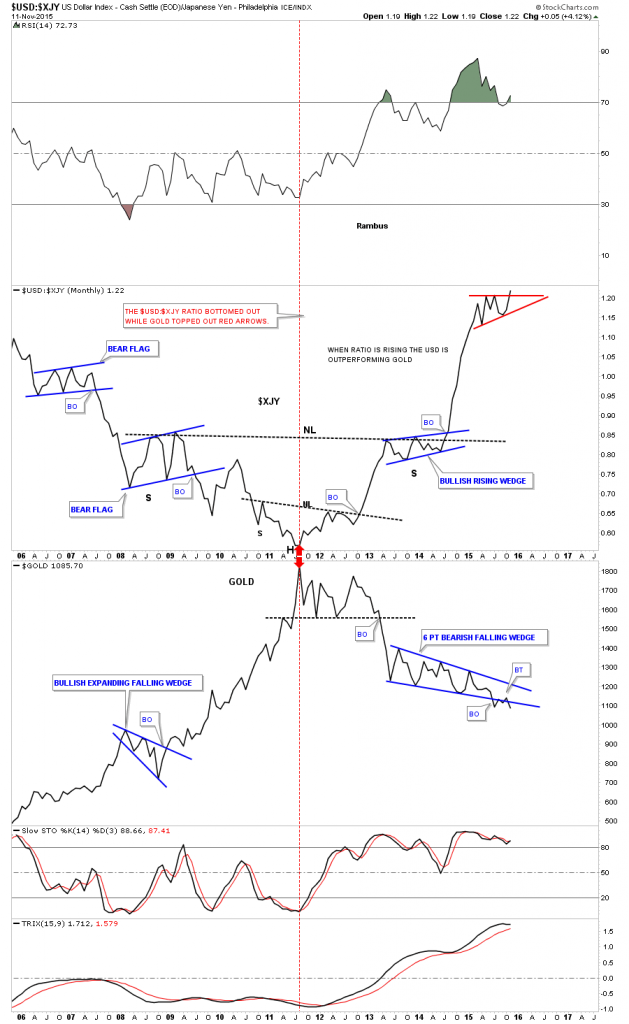 Next lets look at a daily chart for the $XEU which is the biggest component in the US dollar and how the euro goes the US dollar should show an inverse look. If the US dollar is breaking out of a consolidation pattern to the upside then the euro is most likely breaking down from a similar pattern. 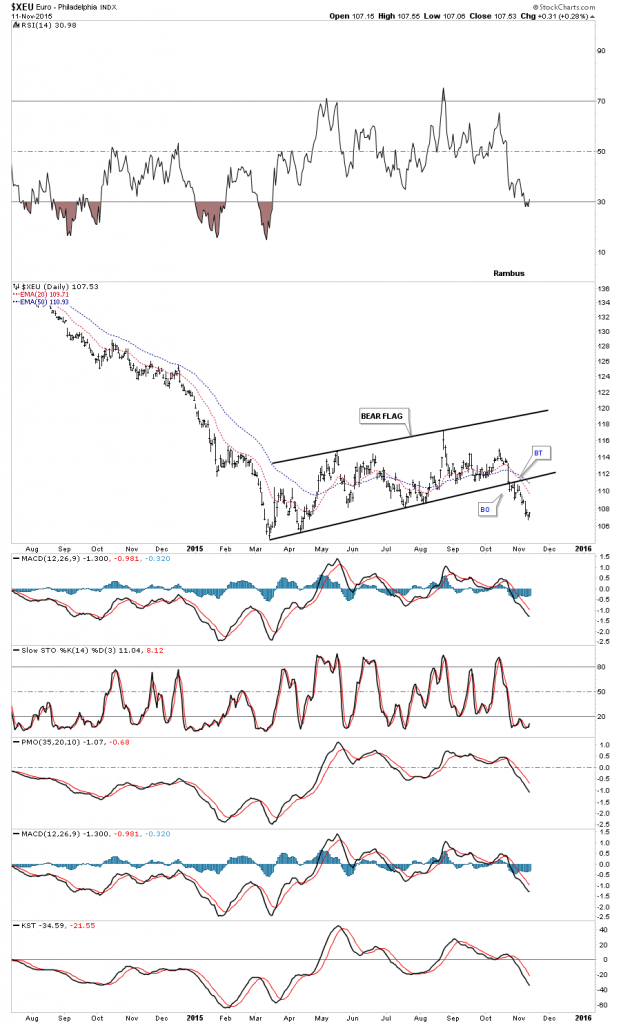 The long term monthly chart for the euro shows it breaking down from the blue bear flag that is sitting right on a possible mid line of a big downtrend channel. As you can see there are no touches on the bottom black rail. Many times a channel like this will double if the bottom rail is broken. 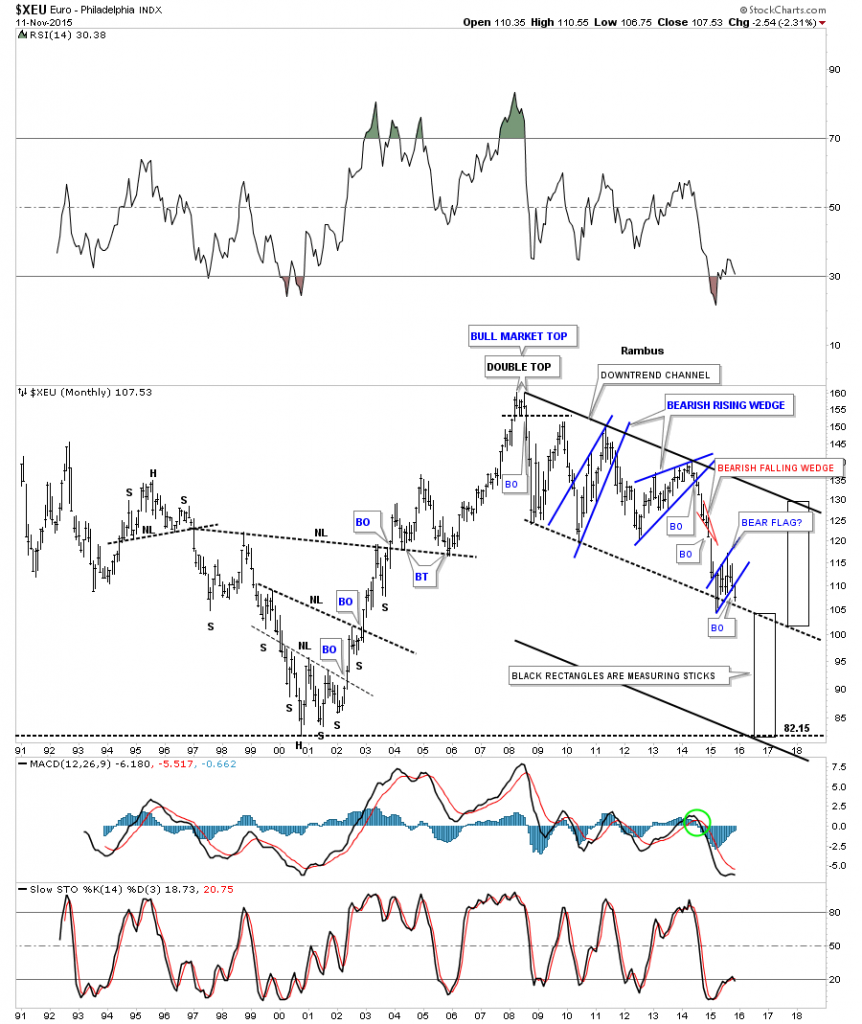 There is another long term monthly chart for the euro which shows a totally different topping pattern but is just as valid as the one above. We’ve looked at this massive H&S topping pattern in the past as one of the possibilities for a weak euro and strong US dollar. As you can see the price objective for that massive H&S top is all the way down to the 2001 low around the 82 area. 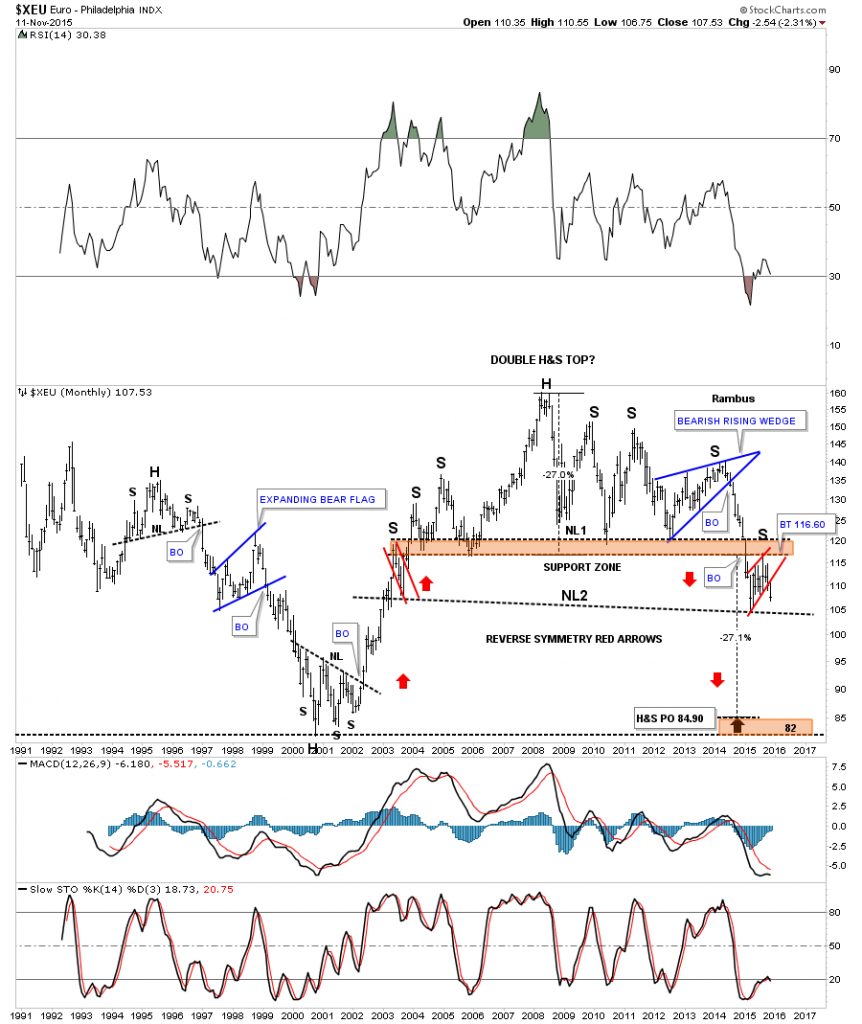 Lets now focus out attention on a couple of commodities indexes as they have been working their way lower since the last time we looked at them. The daily chart for the $CRB index shows it built out the blue bearish rising wedge complete with a breakout and backtest. 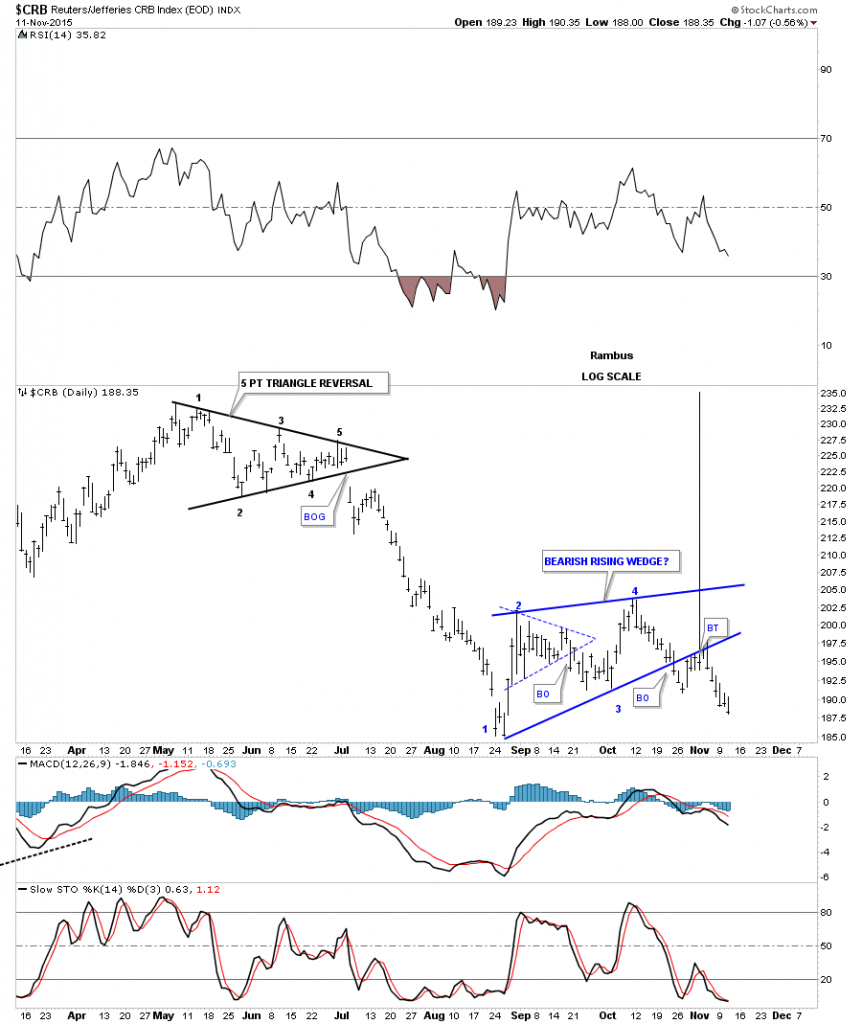 The next chart for the $CRB index is a weekly chart that has some really nice Chartology on it. Recently I just showed you the last couple of years or so but last week I started to look at the history and every time I went back a year all the old annotations came to life. For those folks that like to study measured moves and look at halfway patterns this chart has it all. 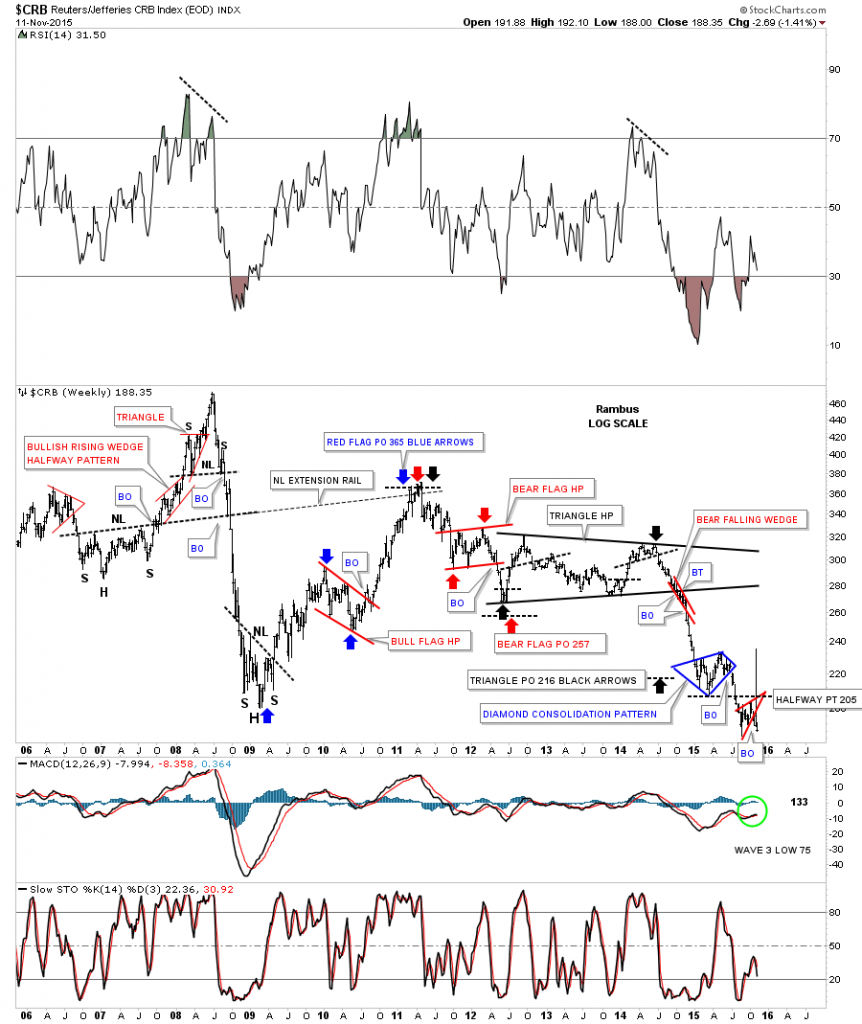 This first monthly chart we looked at a month or so ago but nothing positive has happened for the $CRB index. Just the contrary. It has been getting weaker and is building out another black candlestick and is trading at multi year lows. 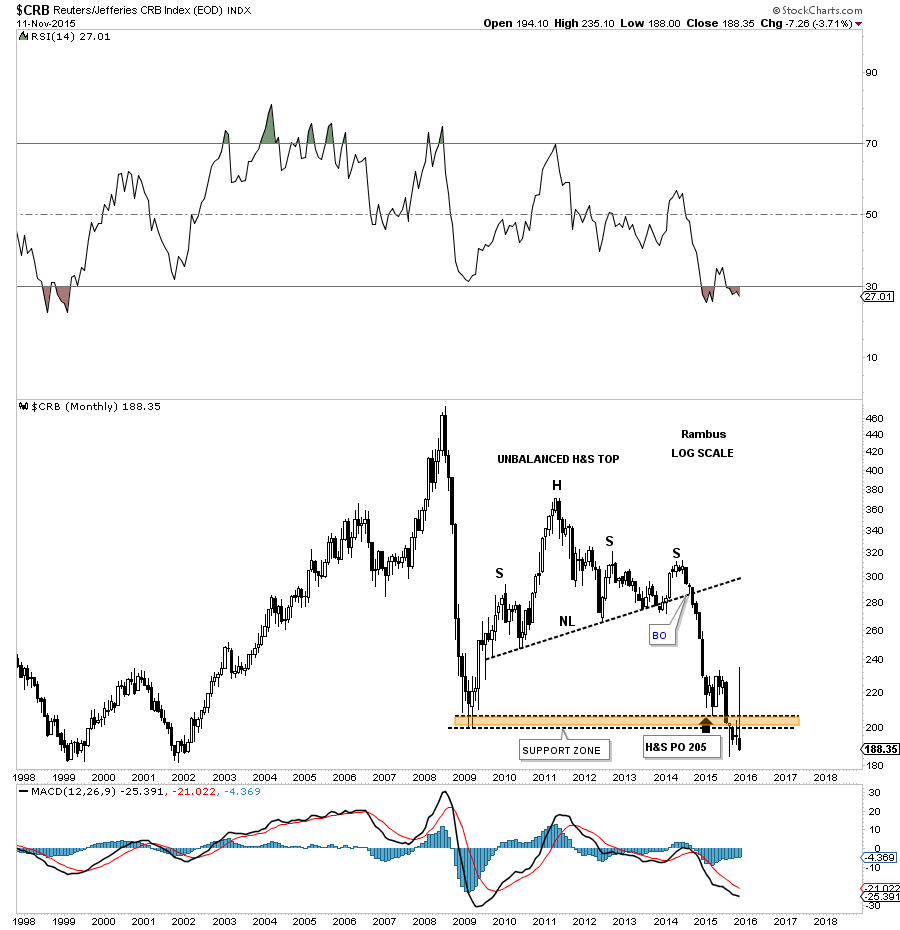 You may remember this 60 year quarterly chart for the CRB index that is now trading at the low end of the brown shaded support and resistance zone. If the brown shaded S&R zone fails to hold there is little in the way of support until the 1970’s low comes into focus. It’s possible we could see a dramatic fall in this index leading the deflationary scenario. 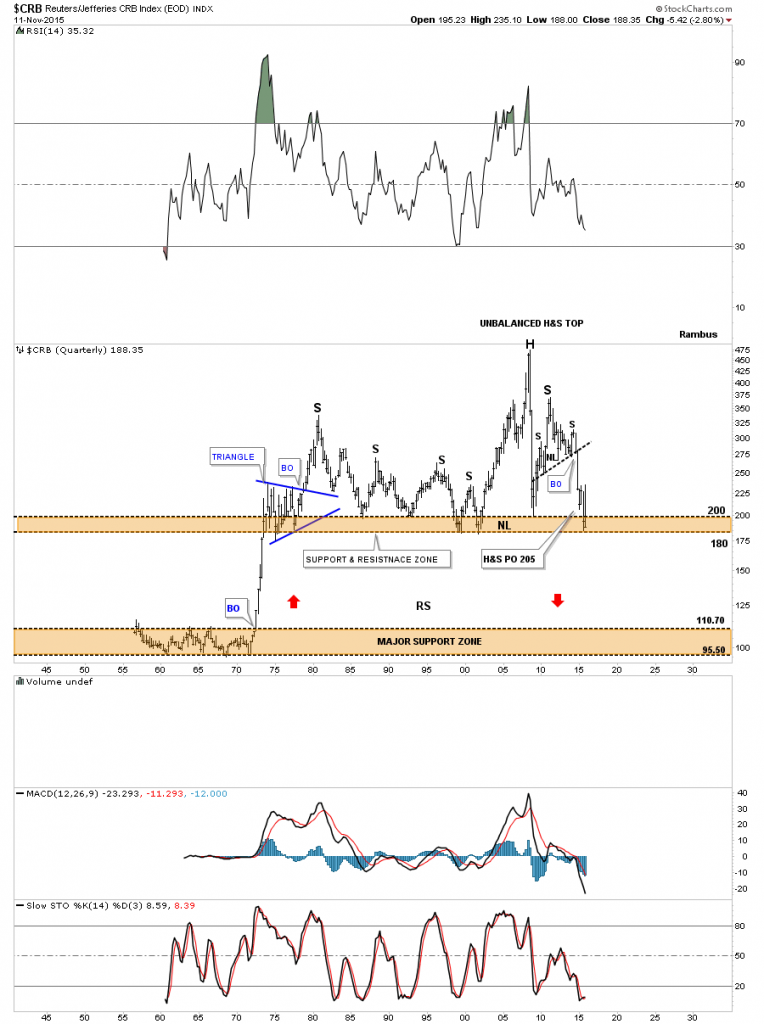 Another commodities index I follow is the DBC commodities tracking index that has also broken down from a blue bearish rising wedge with clean breakout and backtest. 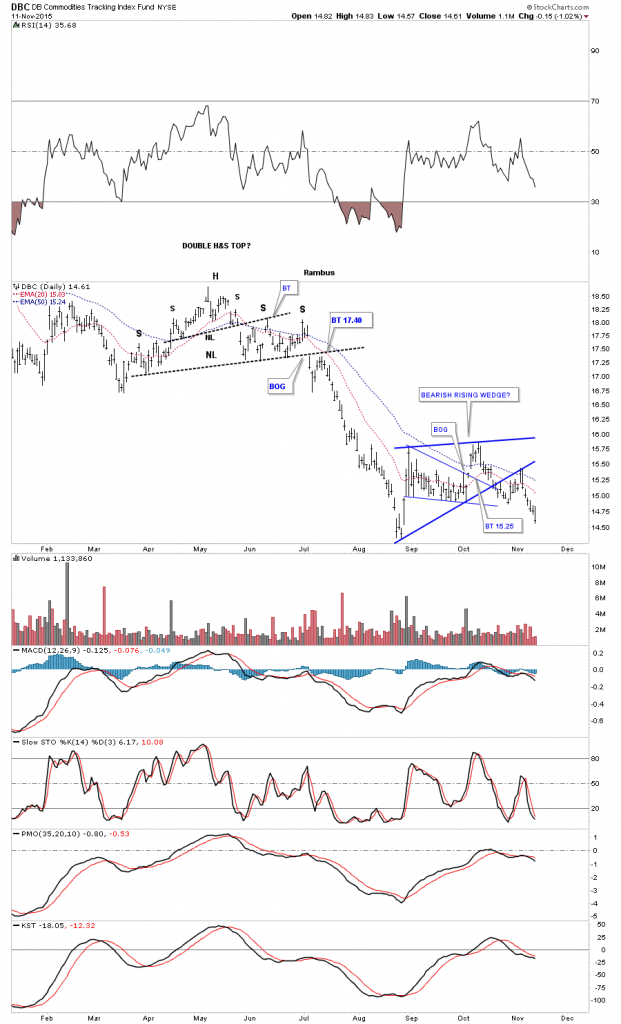 The monthly chart for the DBC index shows it formed a red rectangle just below the 2008 crash low trendline and is continuing to make new all time lows. 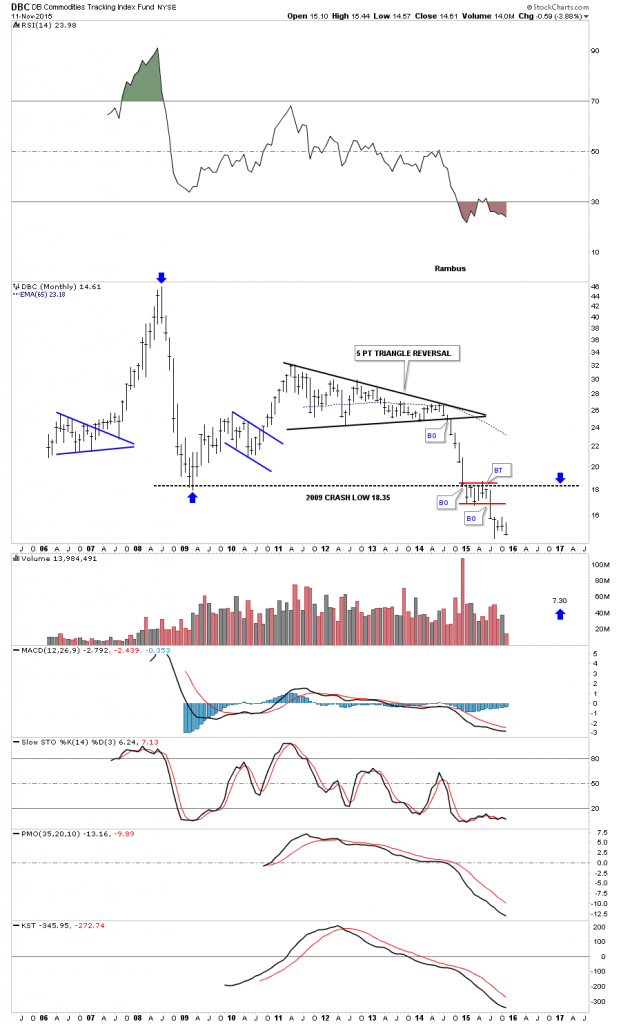 The long term daily chart for another commodities index I follow shows how entrenched it’s in its bear market recently breaking out of the red bearish rising wedge. 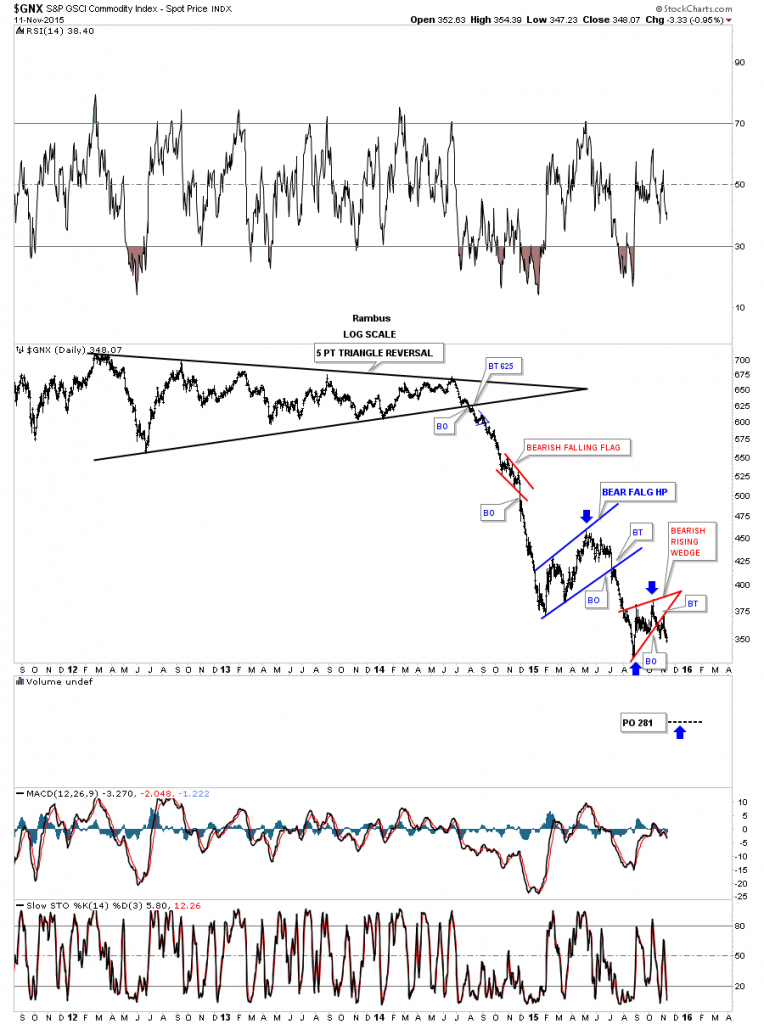 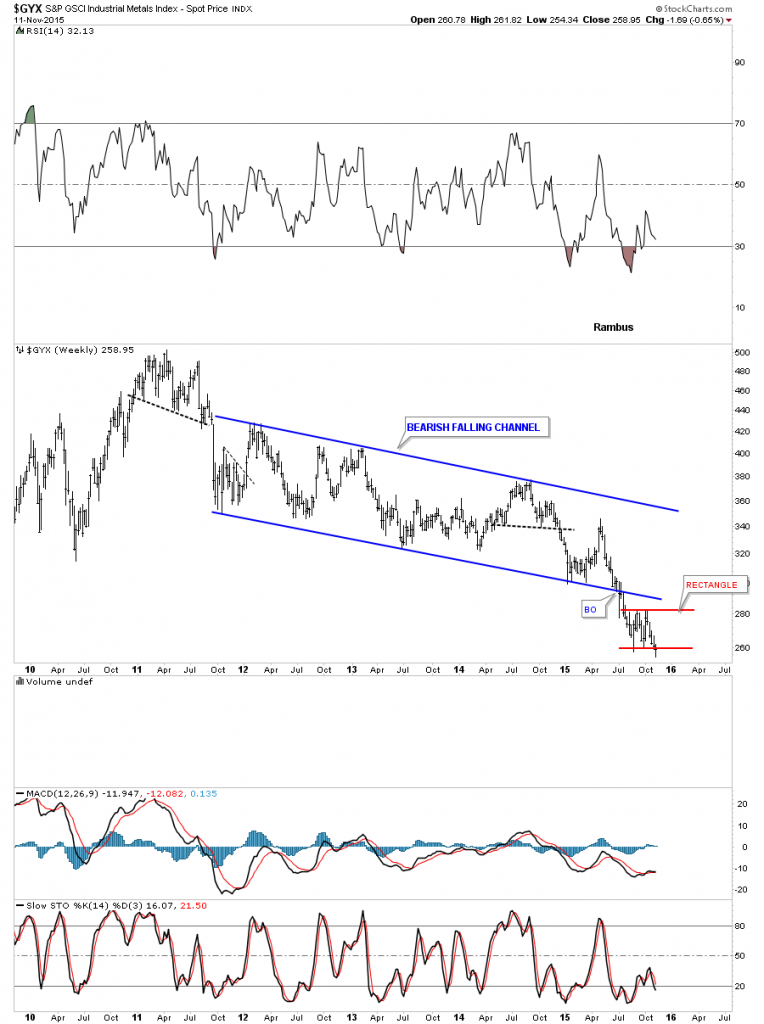 Next lets look at the most important commodity on the planet, oil. Since its big impulse move down from last year the $WTIC has been chopping out a  potential bearish falling wedge, that like the US dollar, I would view as a halfway pattern to the downside. As you can see it’s working on its all important fourth reversal point. 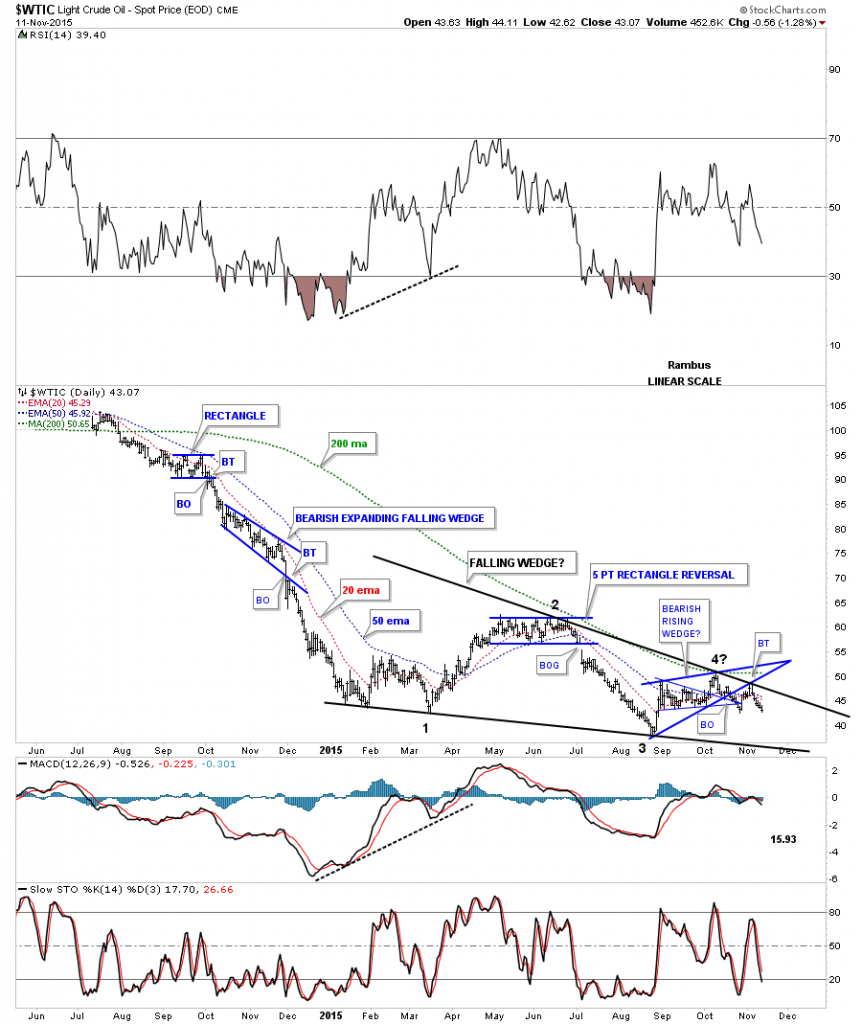 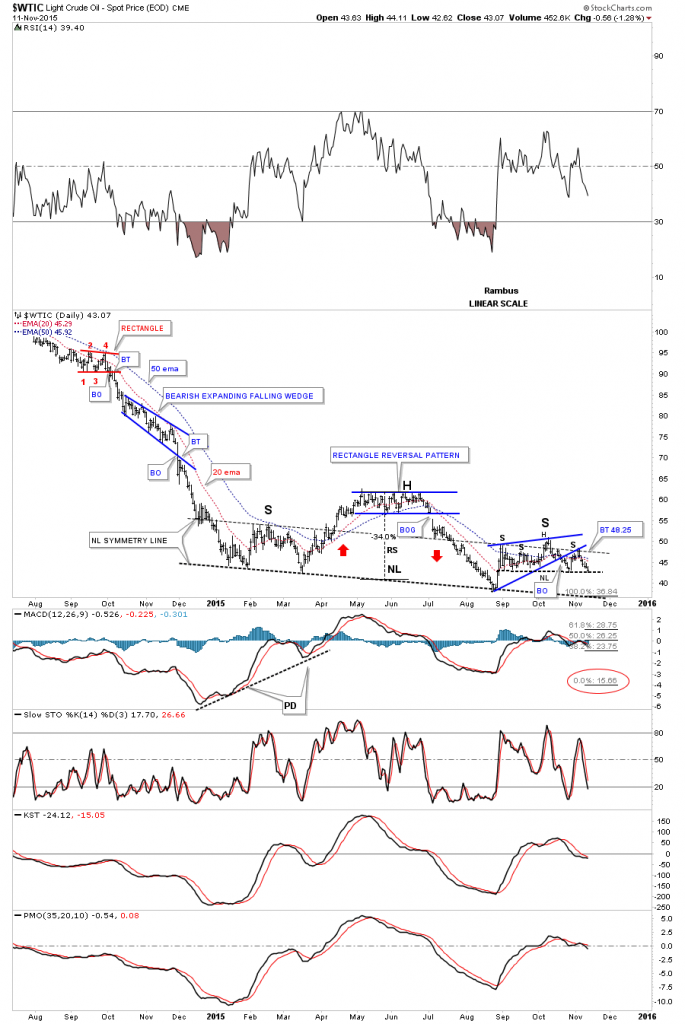 The long term look at oil shows where the real danger lies. Below is a 20 year daily chart for oil which shows its parabolic rise back in 2007 and its even steeper decline into the 2009 crash low. This chart shows you how the potential bearish falling wedge fits into the big picture as shown on the right hand side of the chart.

This next chart for oil is the history chart which goes all the way back to the early 1980’s. For over 20 years oil traded between ten on the bottom and 40 or so on the top. Then in 2004 oil finally broke out above that 20 year resistance zone and all that pent up energy was released and oil went on a parabolic run to $147. As you can see oil actually came down faster than it went up and found support right where you would have expected it to show up, the top of the 20 year trading range at 40 or so.  Note how the blue falling wedge is forming right on that very important brown shaded S&R zone at 40. 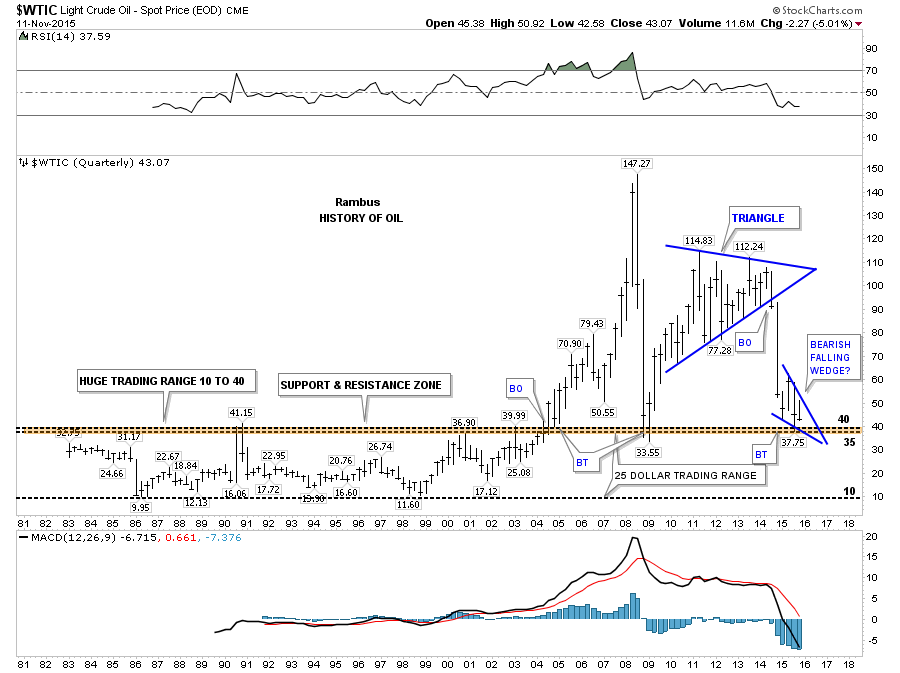 The last chart for oil is the log scale history chart which shows the 20 year lower channel actually doubled in size when the price action broke above the 40 area. It actually was a massive double bottom. You can compare this chart to the long term quarterly chart of the CRB index I showed you earlier.  There is a striking resemblance of what is possible. 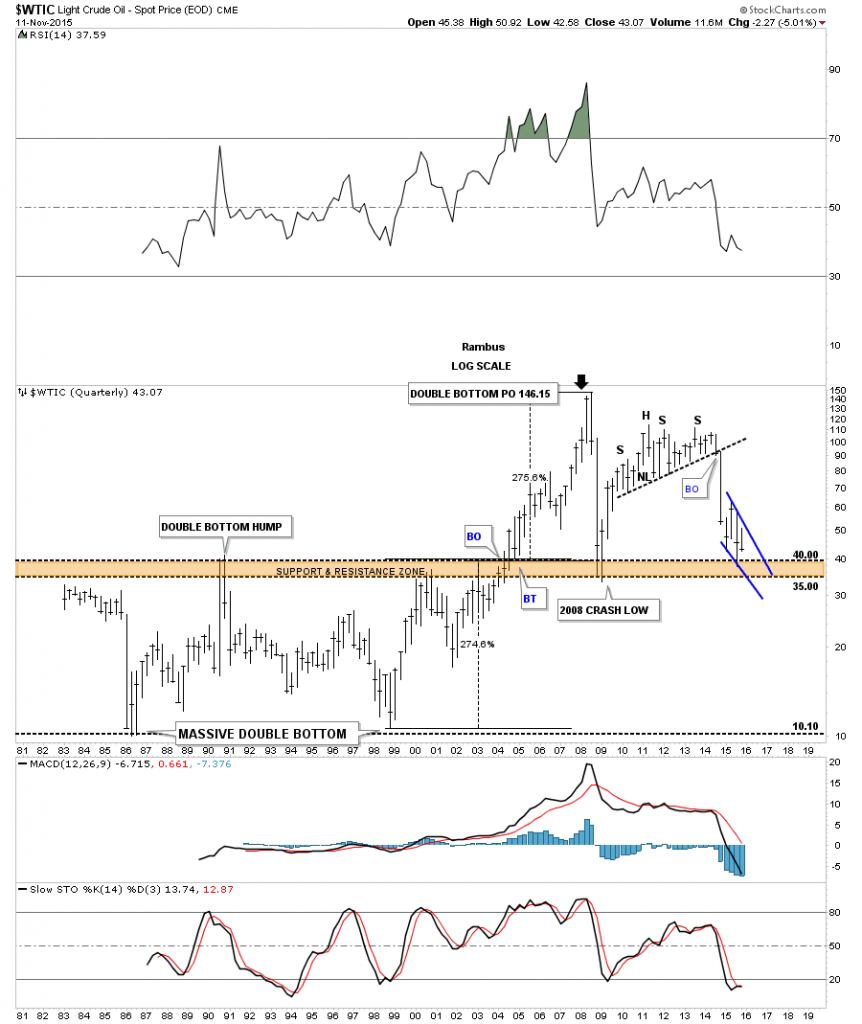 I know it’s getting late but there is one more important commodity I need to show you to complete the big picture. Below is a weekly chart for copper which is breaking down from a small red triangle this week. That small red triangle is forming just below a very large neckline which is usually a bearish setup. 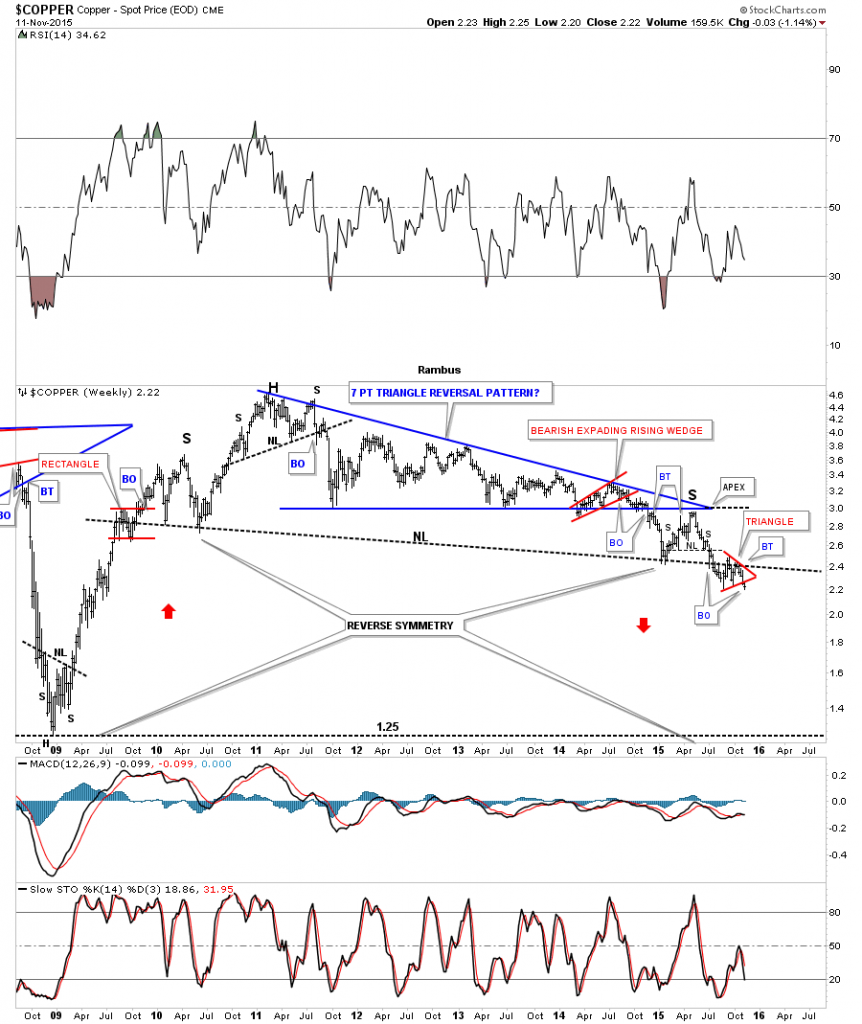 The 20 year monthly chart for copper shows a massive H&S topping pattern with the head being the seven point blue triangle reversal pattern. Like oil and the CRB index there really isn’t much in the way of support below the neckline which copper has already broken below and backtested. This is a good area to see some nice reverse symmetry to the downside. 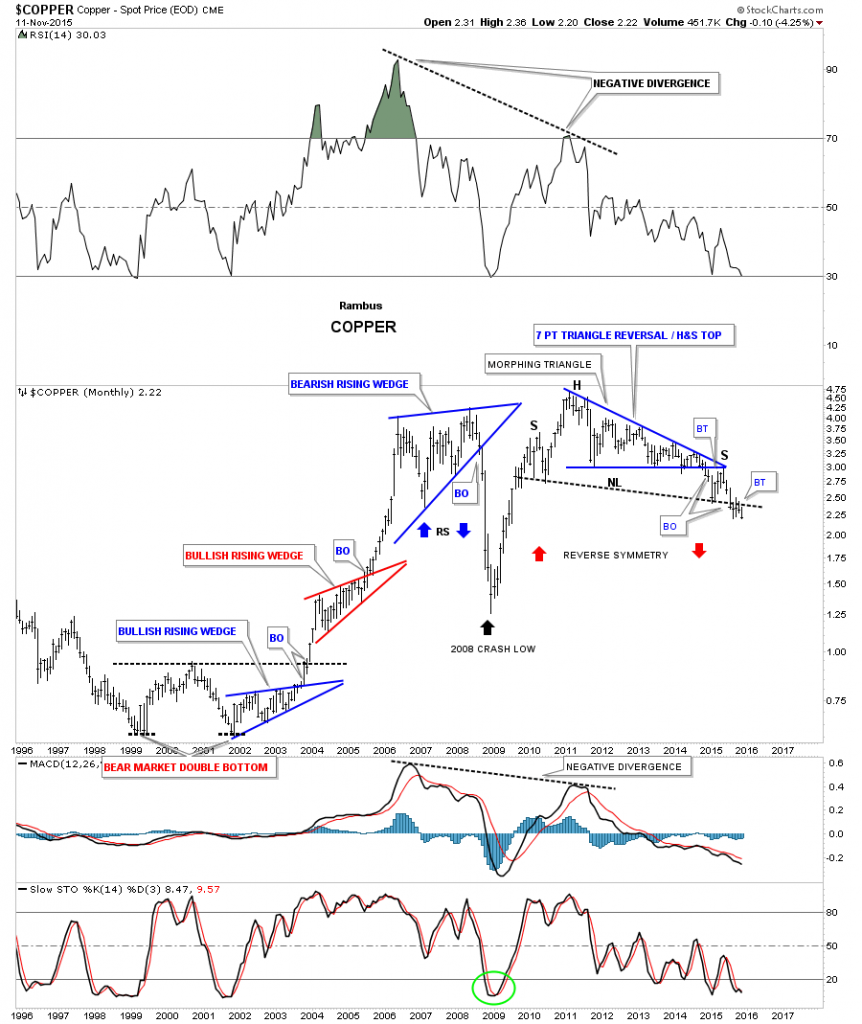 This last chart for tonight is the very long term quarterly chart for copper which shows it formed a 24 year triangle that broke to the upside in 2005 and reached it percentage move at 3.81 or so. At this point the 1.47 area looks like the first place to look for some important support to show up. Note the blue bullish rising wedge that formed right at the top of the big triangle just before it broke out and ran to its all time highs. Is oil’s falling wedge, I showed you earlier, setting up a similar situation but only in reverse.

So the inflection point continues to take hold with most of the important commodities now breaking down out of some very large chart patterns. This also includes the precious metals complex as well. We have the big picture to follow that is so important in understanding what maybe lying just ahead of us. All the best…Rambus 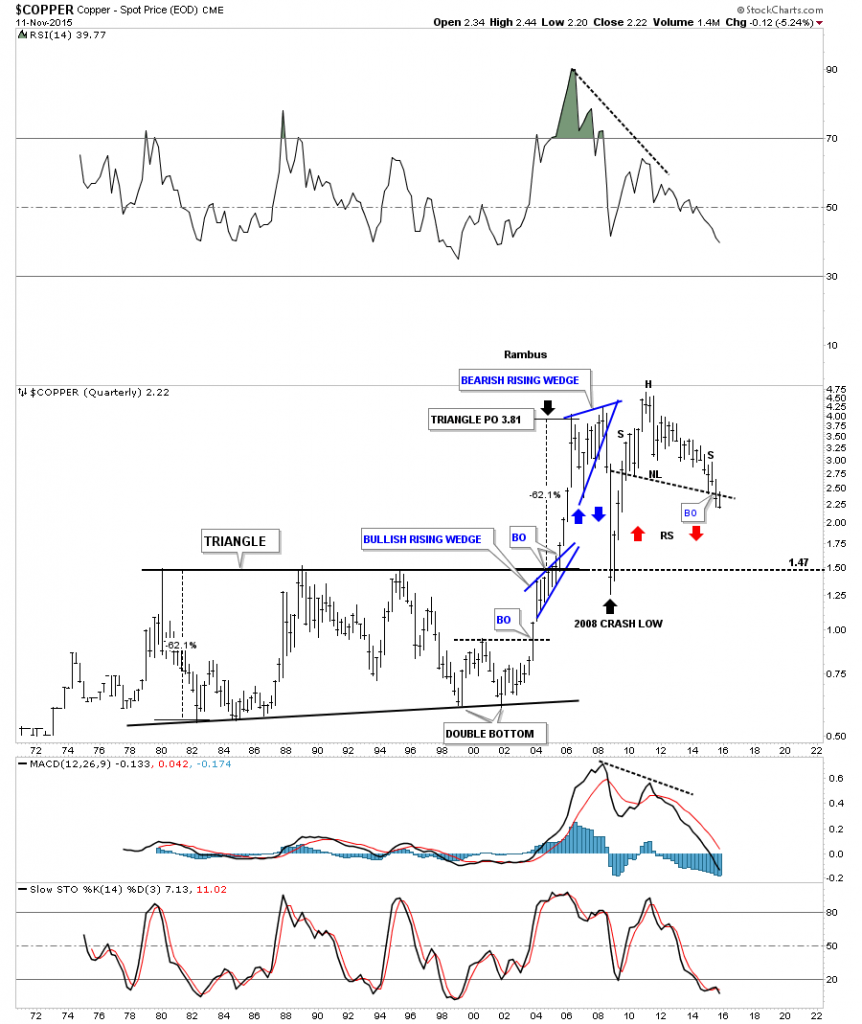 PS: Below is a long term monthly chart for gold which is showing it’s testing a very important neckline symmetry rail right now. 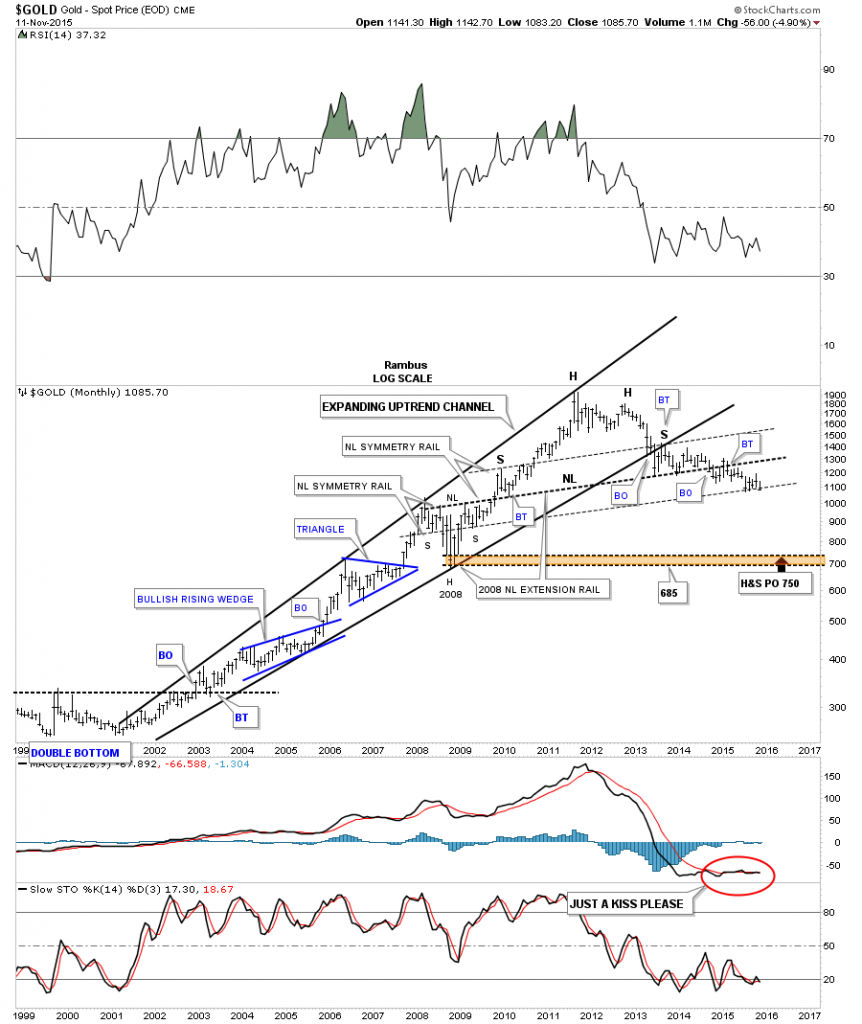