Since we covered the many different markets in detail last week I would like to focus back in on the US dollar and the TLT looking for clues for the big picture direction. The huge daily swings, in say the INDU last week, makes it very hard to keep and hold a short or long position unless you’re perfect on your entry point. In a bull market it’s two steps forward and one step backward and in a bear market it’s two steps down and one step up. If an entry point in a bear market is not made in the first part of the two steps down sequence you’ll find your self behind at some point in the trade if the entry point was made in step two. This is one reason why it’s so important to know the direction of the big trend. Until something changes I believe the US stock markets are now in a bear market. There are a lot of things that can change that outlook but for today that’s what the charts are suggesting. 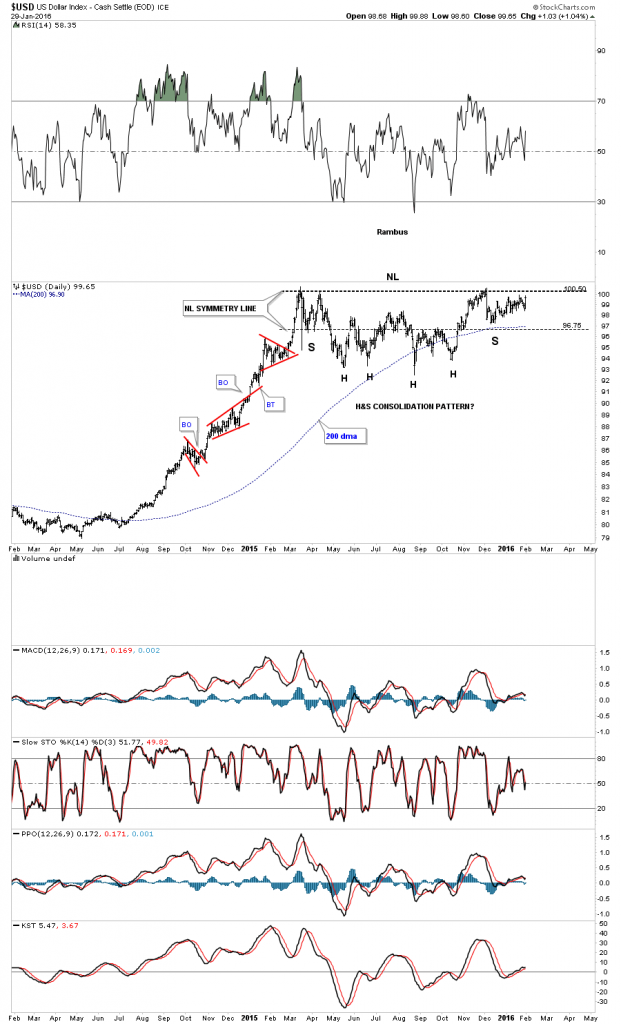 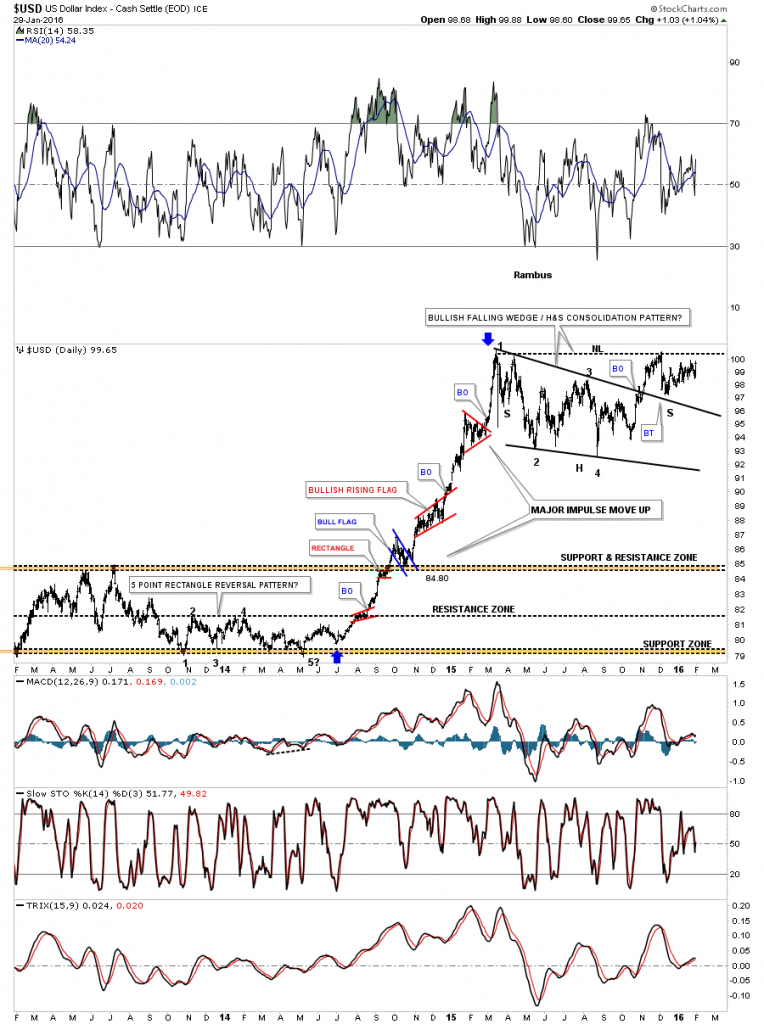 Below is a daily line chart for the US dollar which shows the price action still trading above the 20 and 50 day ema’s. 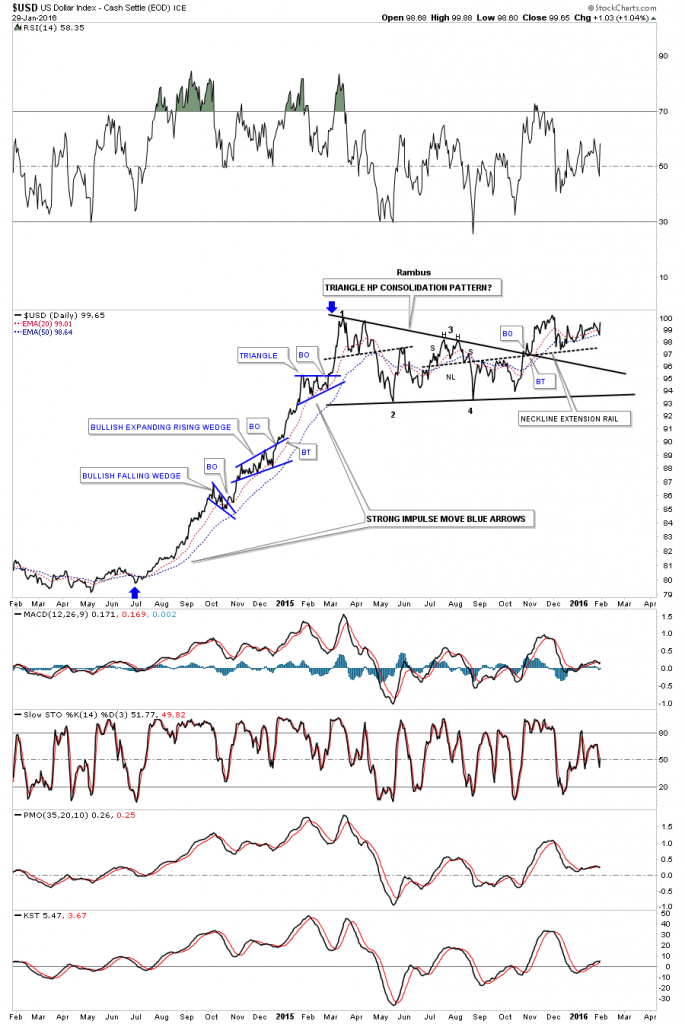 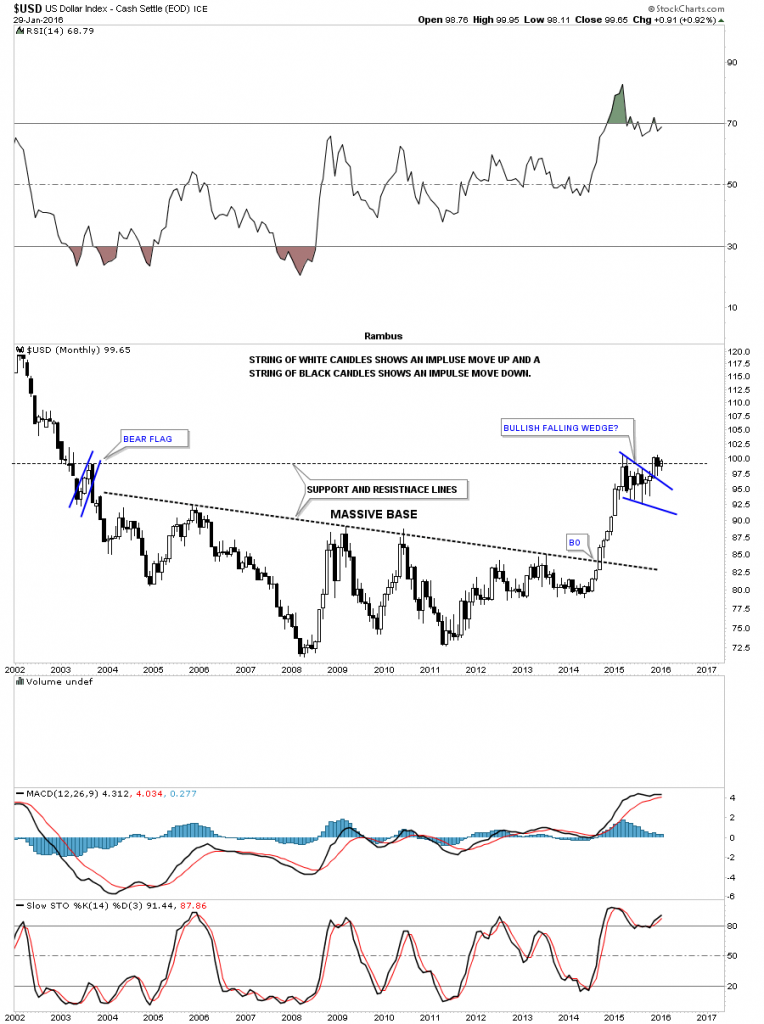 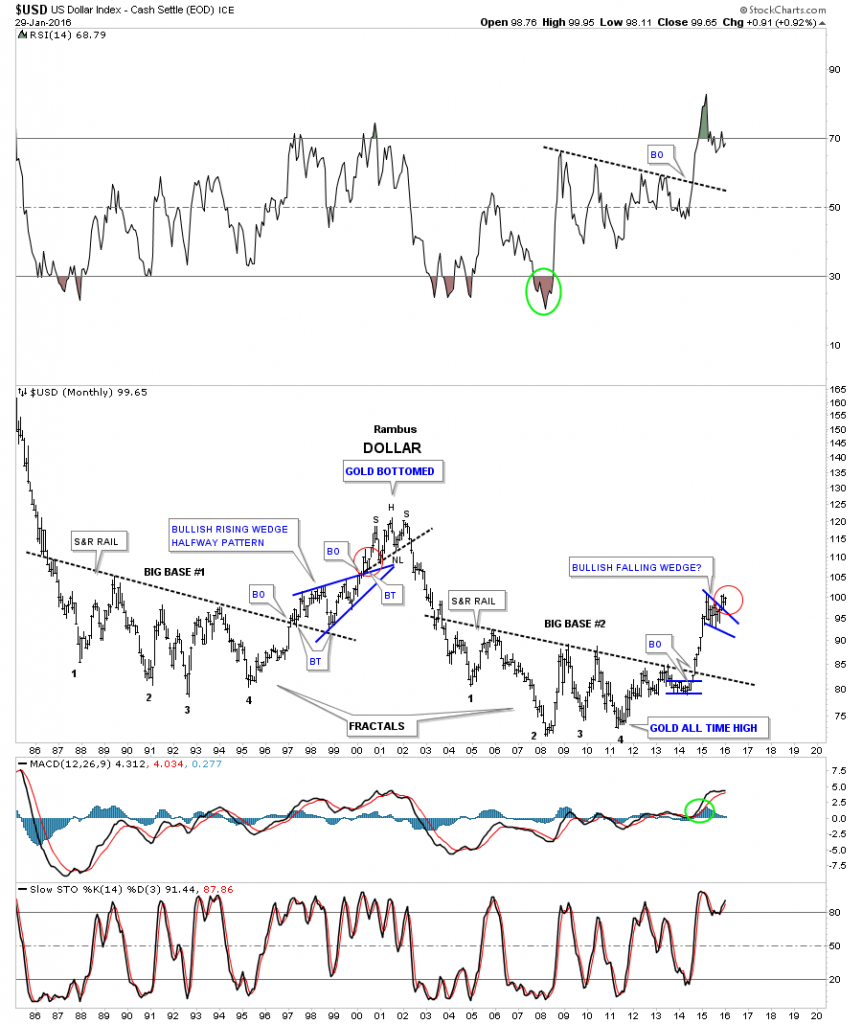 This last chart for the US dollar is a long term monthly combo chart which has the US dollar on top and gold on the bottom. As you can see a serious inflection point is right at hand. If the US dollar can breakout to new highs for its bull market, gold which is testing the top rail of its parabolic downtrend channel should decline inversely. Keep in mind this is a monthly chart. It will be interesting to see what the monthly bar looks like for both the US dollar and gold come the end of February. 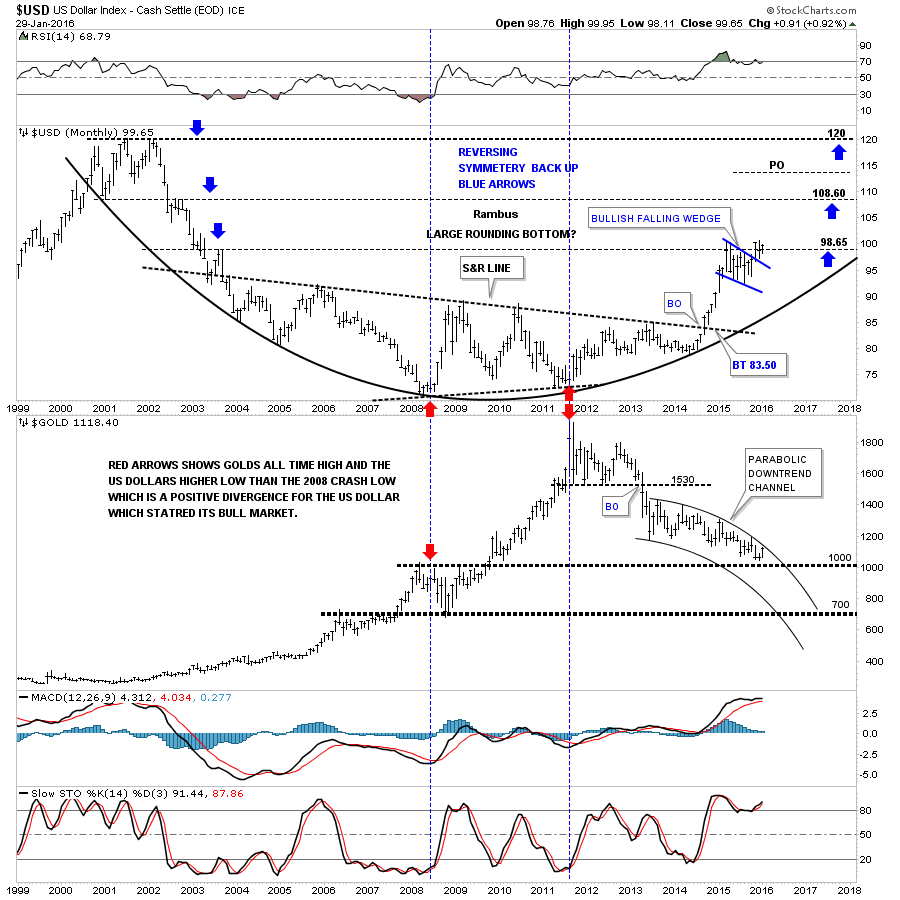 Below is a weekly chart for the UUP which shows the possible H&S consolidation pattern with alot less noise than a daily chart can make. 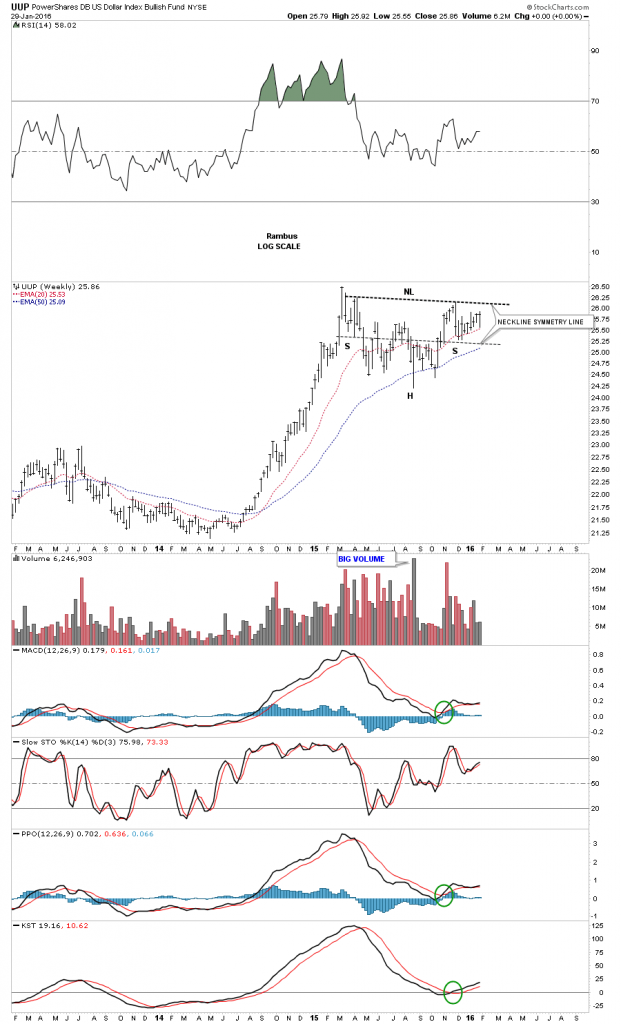 This next chart is the USDU which is the newer version for the US dollar which is more equally weighted. Several weeks ago it broke out topside from the black bullish rising wedge. This past week it backtested the top rail and is getting a bounce. This is a critically important area right here. 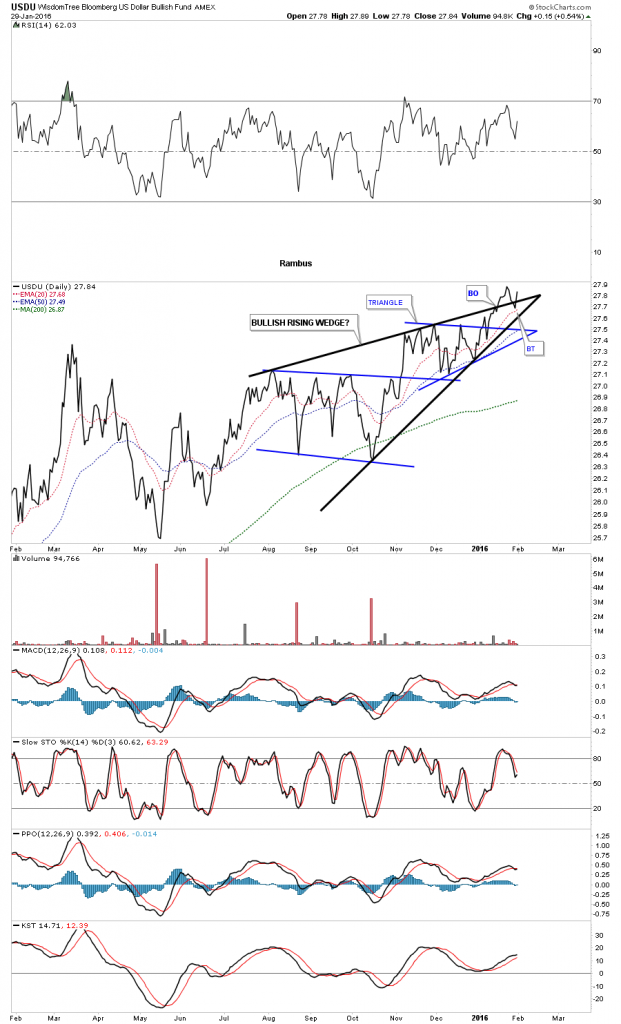 The weekly bar chart for the USDU shows it’s ahead of the traditional US dollar index as it has made an new high for its bull market complete with the breakout and backtest. 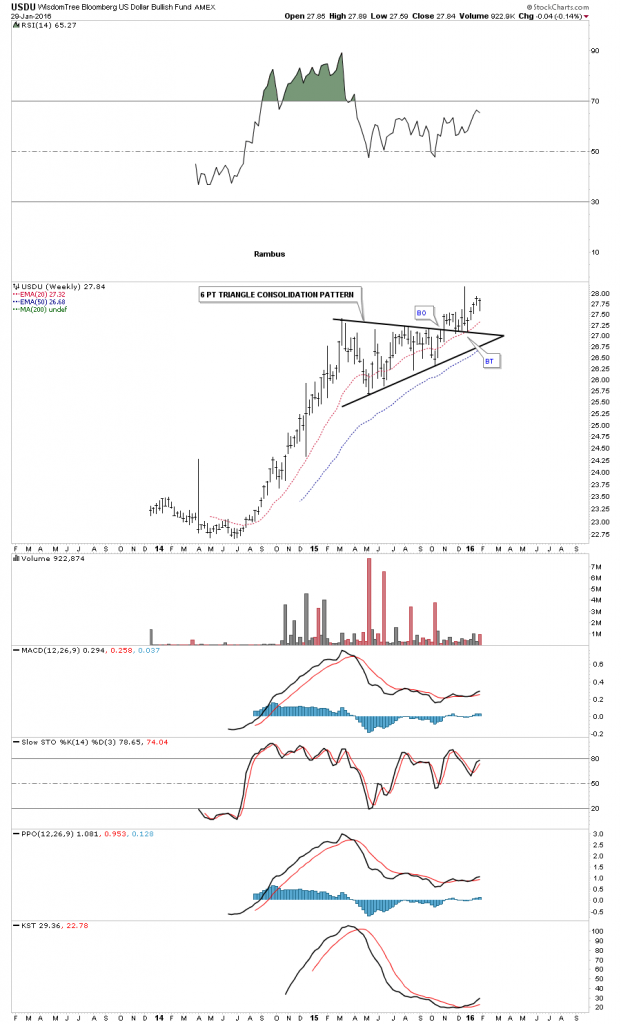 The weekly line chart for the USDU shows it actually broke out of its blue triangle consolidation pattern last fall with the 30 week ema giving strong support. 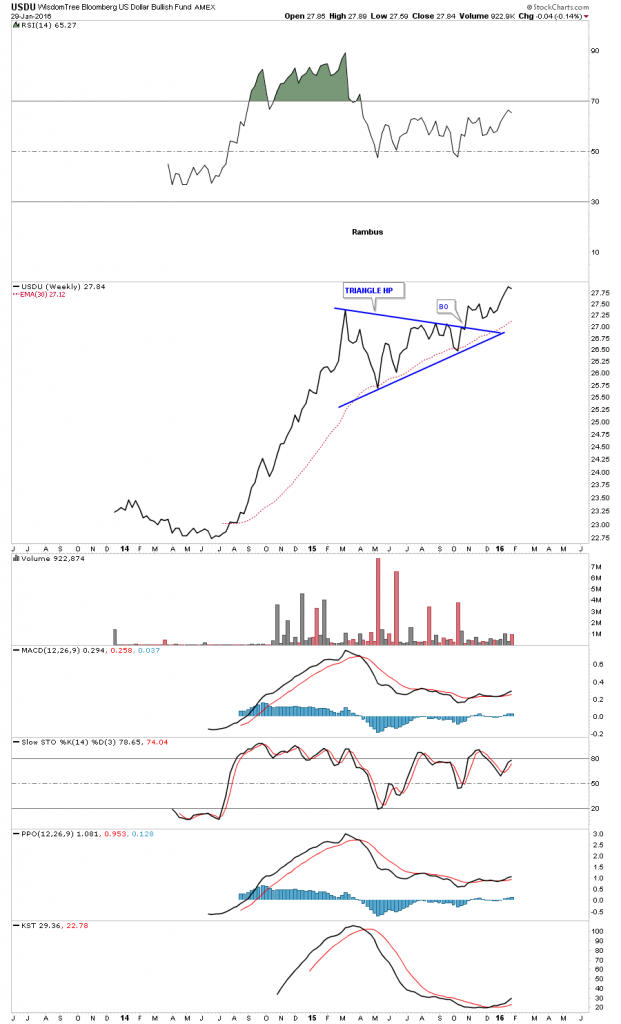 Next I want to focus in on the TLT, 20 year treasury bond fund, which is playing a big role in how I’m looking at commodities, the precious metals complex and the deflationary spiral we find ourselves in. The first thing we need to know is if the TLT is in a bullish or bearish mode right now. This first chart is a daily line chart which shows the TLT breaking out of a pretty nice base at the beginning of 2016. The 20 and 50 day ema’s have a bullish crossover while all the indicator are positive. I’m going to show you this daily line chart first so you can see the difference between a bar chart, which can produce more noise sometimes, vs a line chart. Both charts will be identical except one will be a line and one a bar. 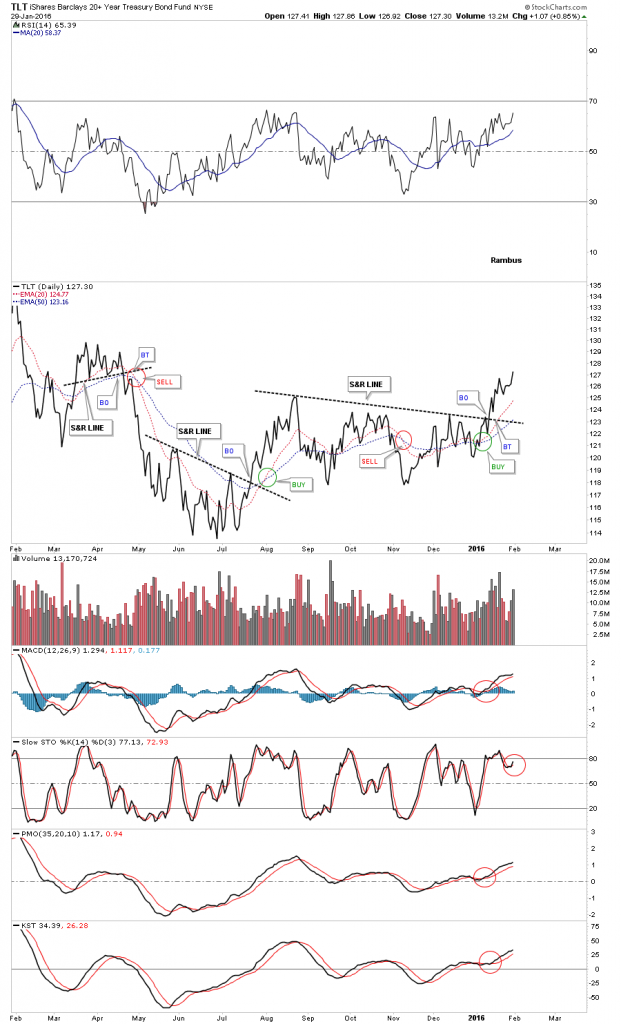 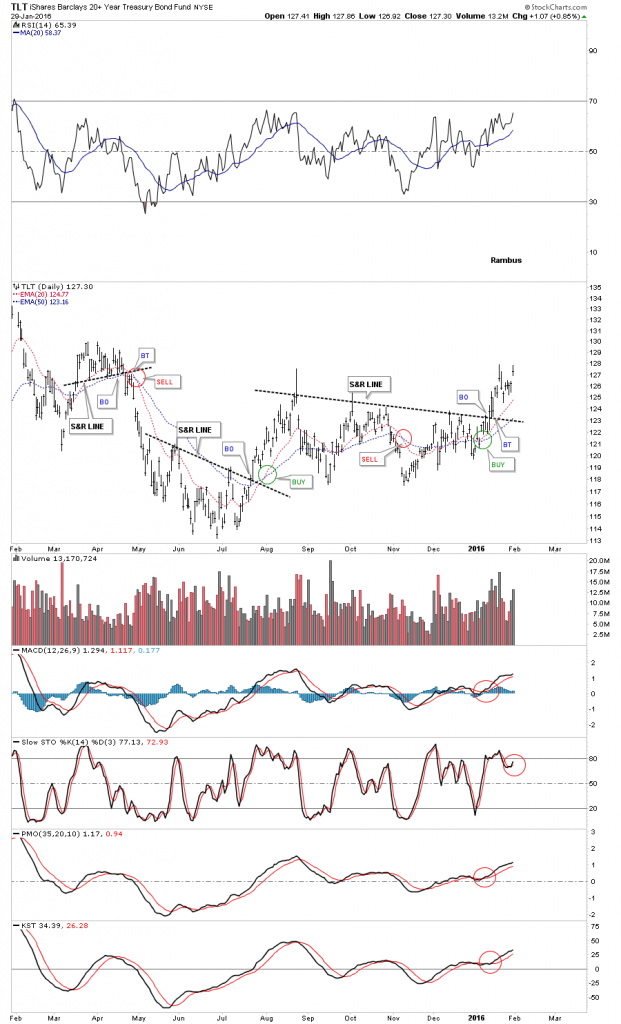 Next lets look at the weekly line chart for the TLT which shows its bull market consolidation patterns. Note the strongly slanted H&S consolidation pattern which has just completed the breakout and and backtest. Note how the backtest to the neckline found support right on the 30 week ema. All the indicators are positive. 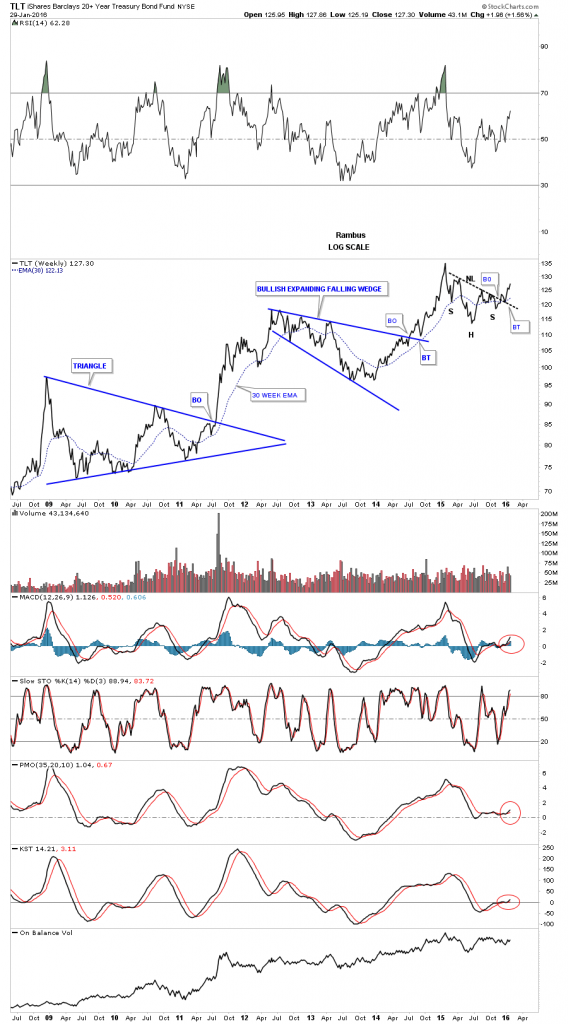 Below is the exact same chart using a bar chart. 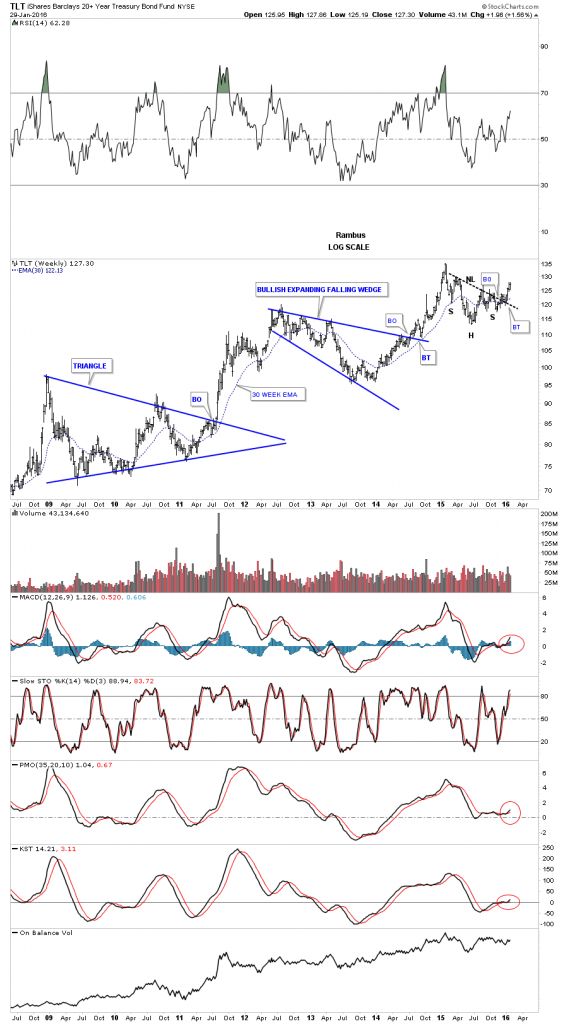 The long term monthly chart for the TLT shows its complete history which is a double trendline uptrend channel. Note how our current H&S consolidation pattern formed right on top of the brown shaded support and resistance zone. So far so good. 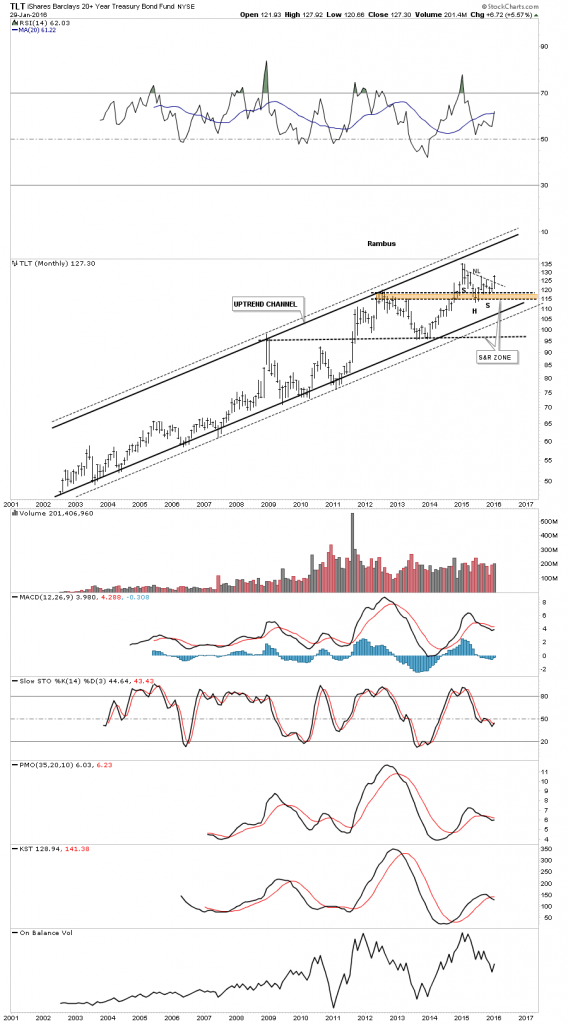 Now I would like to show you why it’s so important to have a bullish looking TLT in regards to being short the commodities and the PM complex. This next chart is a ratio chart which compares the TIP:TLT on top with the $CRB and GDX below it. This is where the TLT charts we just looked at above come into play. I’ve overlaid the TLT in red over the ratio chart TIP:TLT in black. When the ratio chart on top in black is rising, it’s showing general inflation and when it’s falling deflation. Note the H&S consolidation pattern on the TLT, which we looked at earlier in red, and the inverse look which shows the ratio chart in black with a H&S consolidation pattern. As long as these keep moving in their current direction we should see deflation picking up. Note how the  $CRB and the GDX have behaved during this deflationary cycle. Also note how the ratio chart in black topped out in 2011 along with the $ CRB index and the GDX. It’s not a perfect correlation but close enough to get the sense of the inverse movement. 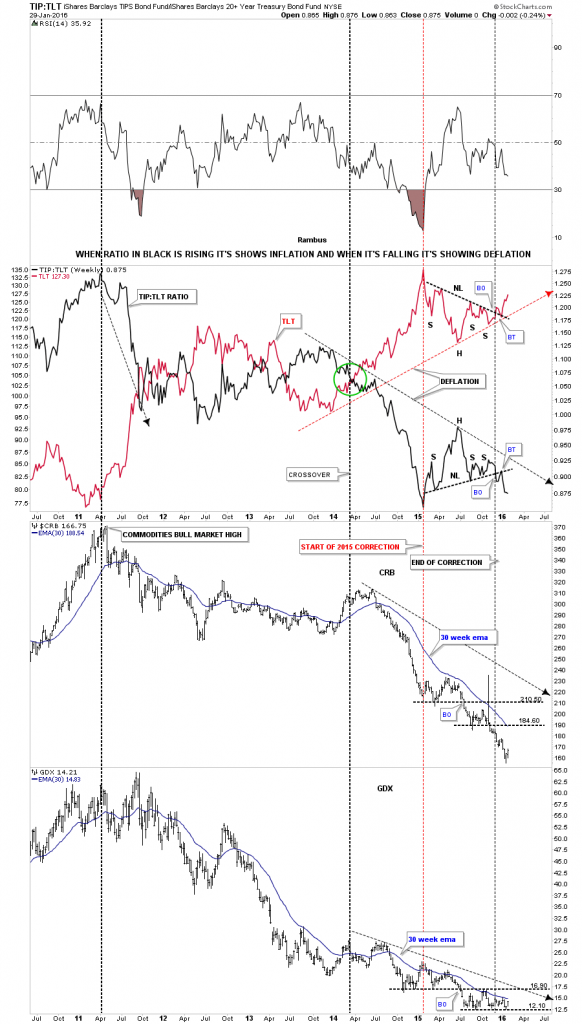 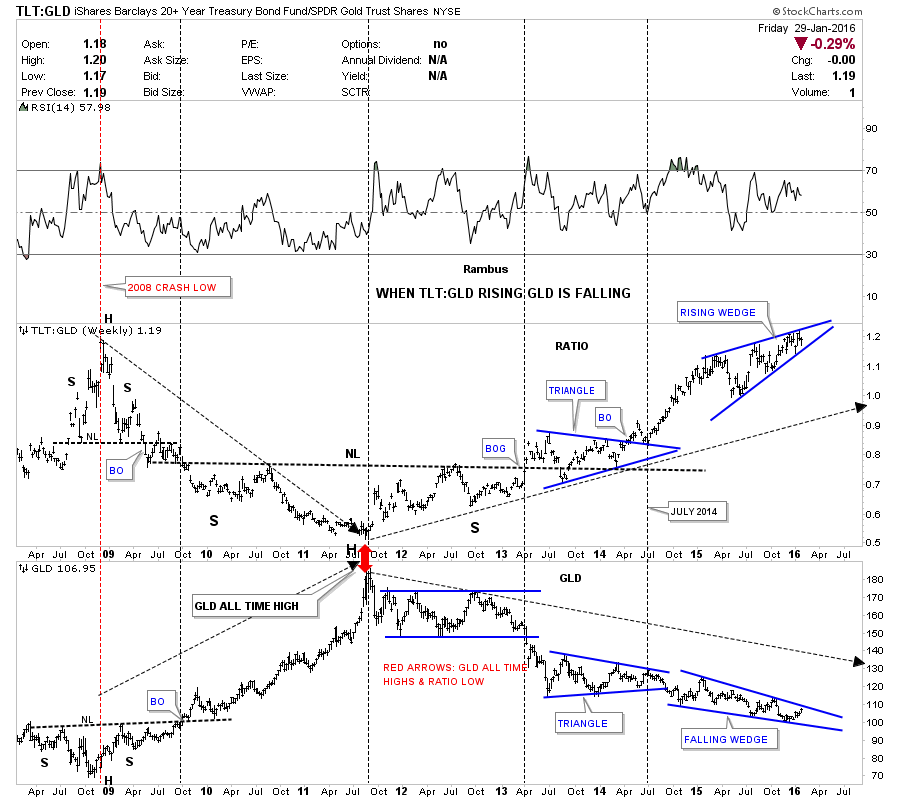