In this Weekend Report I’m going to show you some updated charts on the US dollar which has been in a bull market since the low in 2011. It’s hard for a lot of investors to admit, but until the charts change the bull market continues. A bull market is characterized by a series of consolidation patterns forming one top of the next, until the last pattern is a reversal pattern which reverses the bull trend. The old expression, the trend is your friend, also applies to the US dollar as well. Until the US dollar negates the series of higher highs and higher lows on an intermediate term basis, we have to assume the bull market is in tact.

Lets start by looking at a daily line chart for the US dollar which shows the horizontal trading range beginning back in March of 2015. The breakout topside of the horizontal trading range took place a little over 2 months ago in November of last year. After the initial breakout there was the initial backtest which could have been the beginning of the next impulse move up, but the US dollar stalled out a month later and is currently backtesting the top rail around the 100 area again.

This is getting a lot of investors bearish on the US dollar, but nothing is broken yet. So far the top rail of the rectangle consolidation pattern is still holding support and until it’s broken this is still just a backtest before the next impulse move up begins in earnest. It’s all about playing the odds. 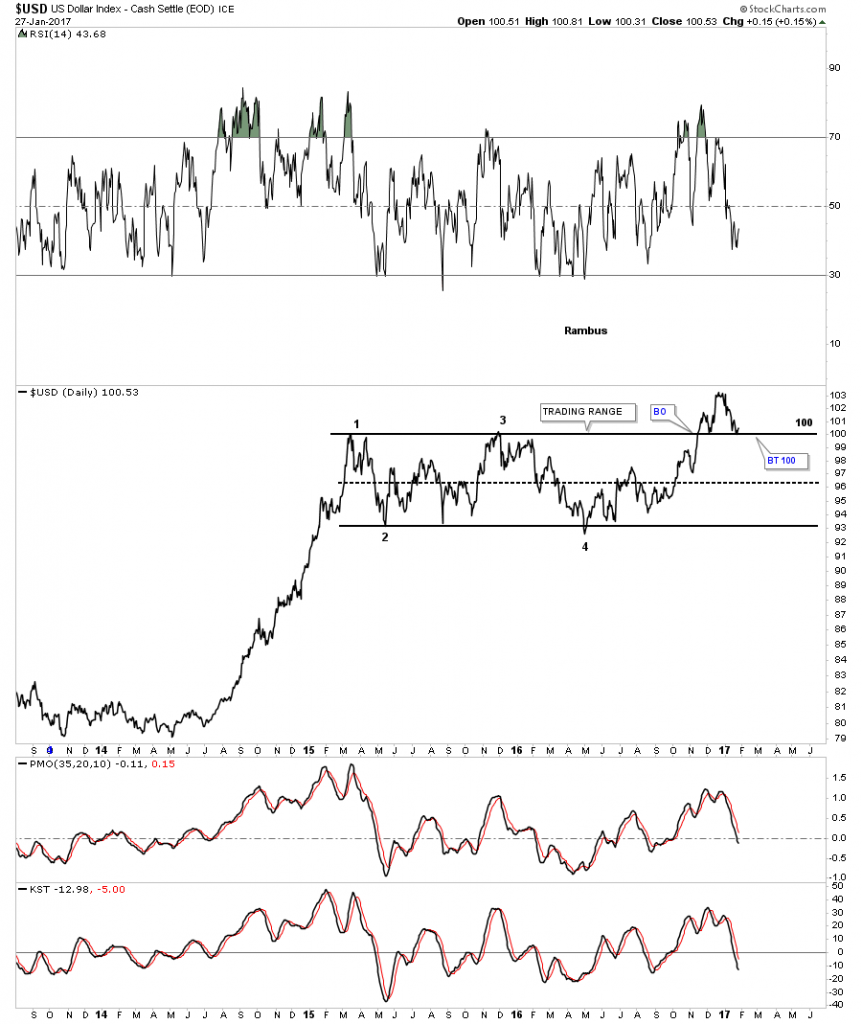 Below is a daily bar chart for the US dollar which shows the price action backtesting the top rail of the sideways trading range. Last Friday the US dollar closed right on the top rail. A worst case bullish scenario for the US dollar would be if the price action declined down to the center dashed mid line, that can happen in sideways trading ranges before the move you were looking for finally takes place. A close below the center dashed mid line would negate the bullish breakout that is currently underway. 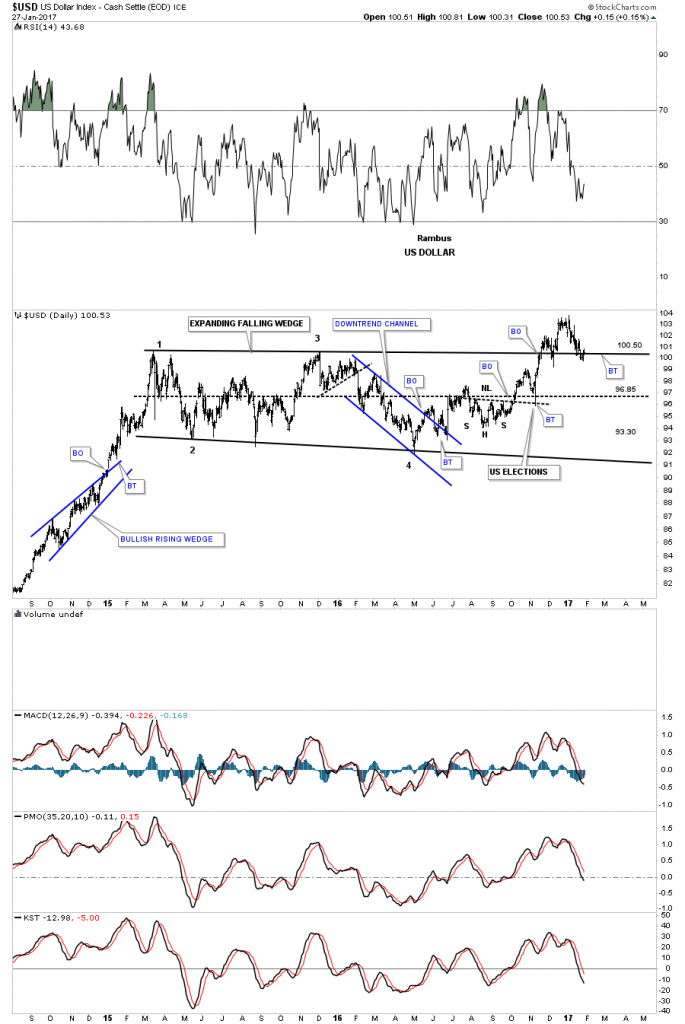 There is another consolidation pattern that has formed during the last year of trading inside the horizontal trading range which is a double H&S bottom. Neckline  #1 was broken to the upside in October of last year with the backtest to the neckline being the US election spike. From that backtest the US dollar rallied strongly and broke out above neckline #2, which was also backtested from above with the 50 day ema giving support at the neckline. Neckline #2 support now comes in at the 98.85 area. 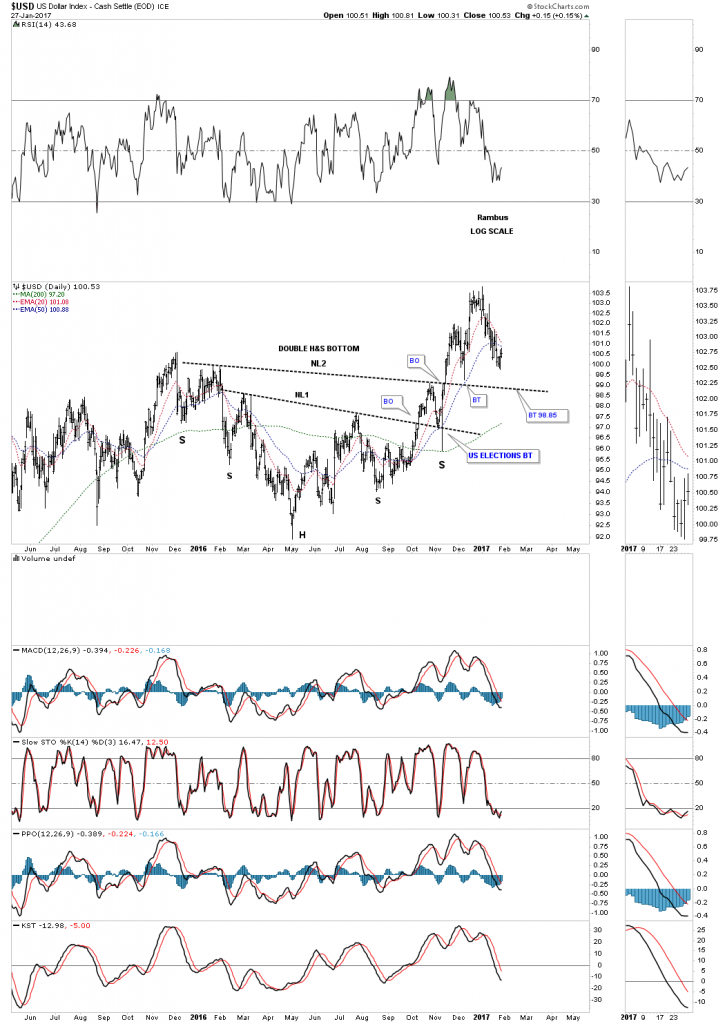 This next chart is a weekly look which puts our year and a half horizontal trading range in perspective. In a bull market there is an impulse leg up followed by a consolidation pattern that leads to the next impulse leg up, so on and so fourth, until the bull market exhausts itself and a reversal pattern builds out. 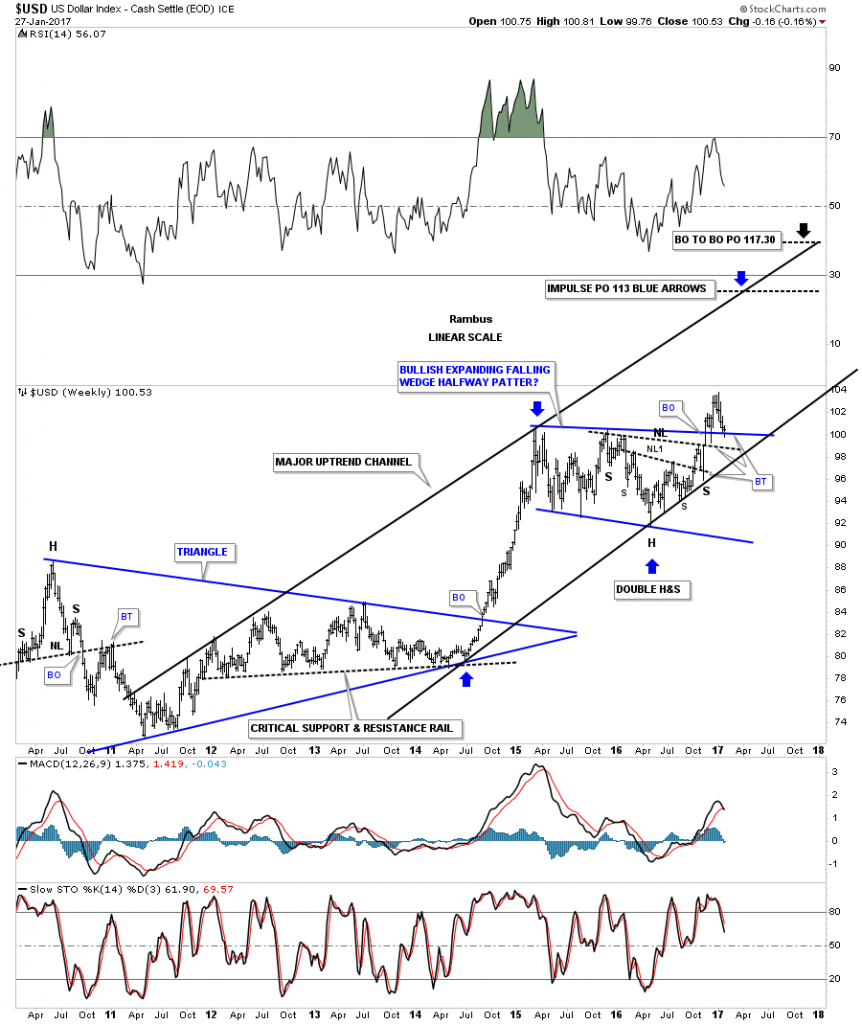 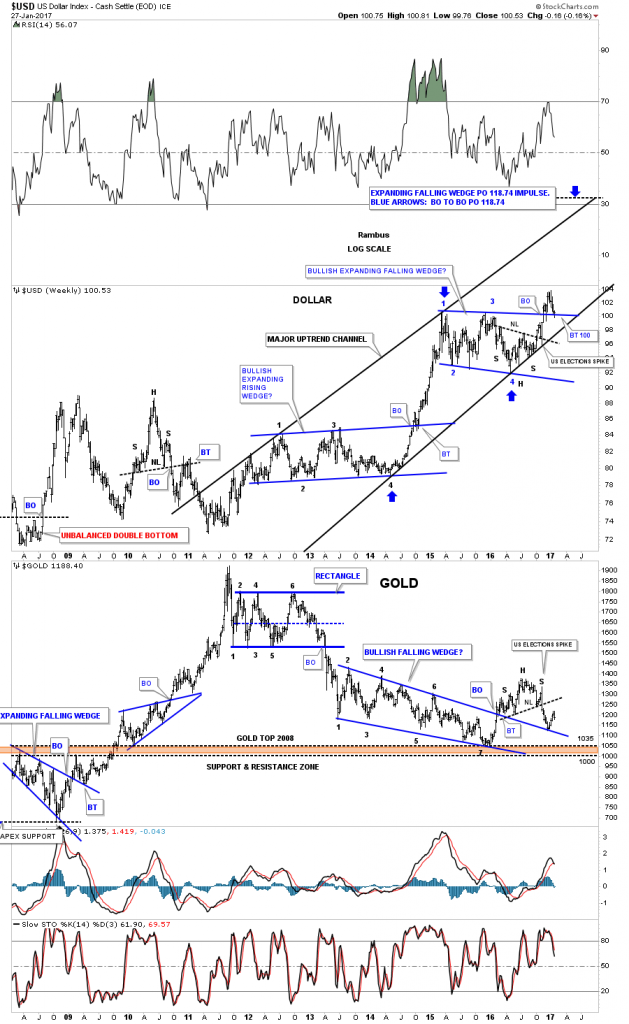 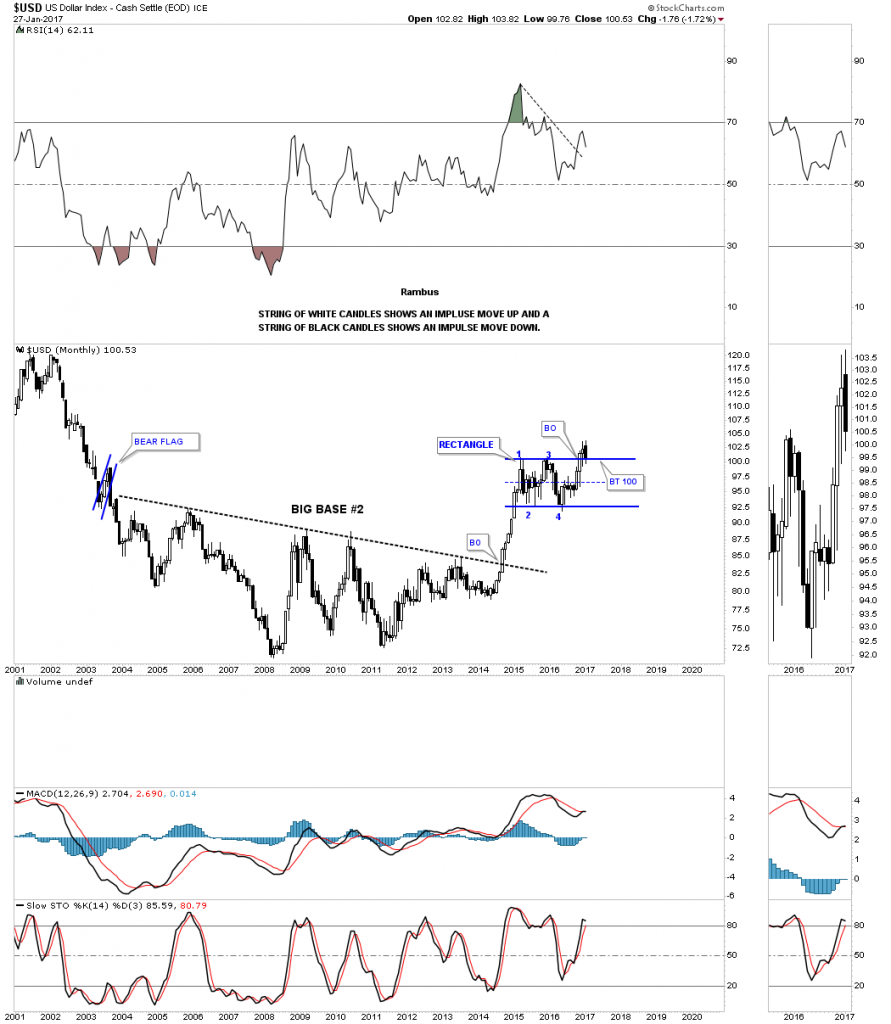 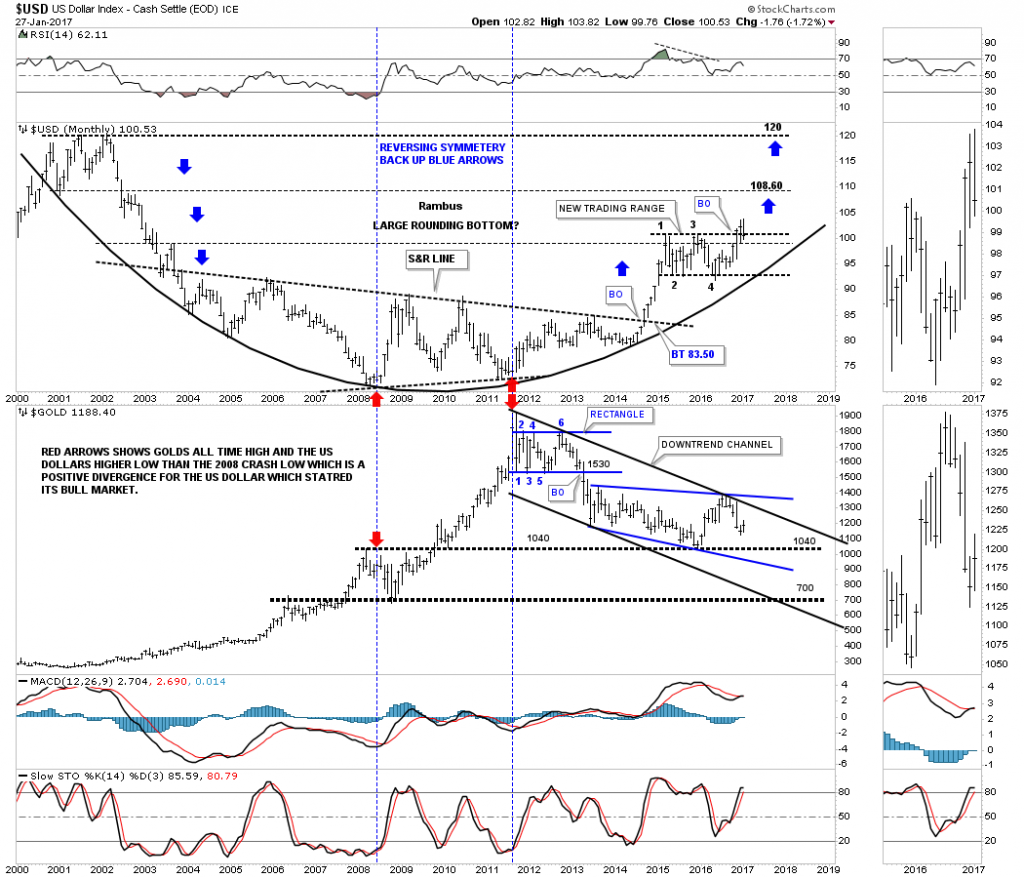 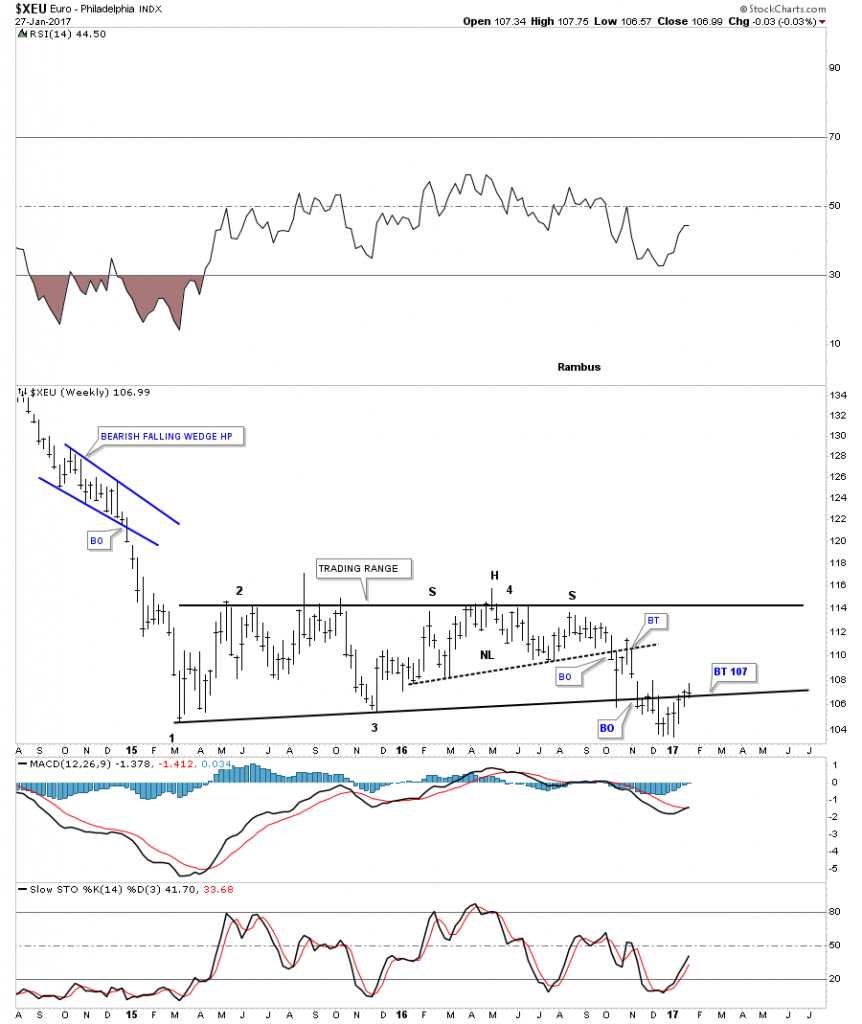 This long term monthly chart for the XEU shows a massive H&S top in place. The impulse move down out of the blue bearish rising wedge is the same impulse move up in the US dollar, which started in 2014. After slicing through the brown shaded support and resistance zone the euro began to consolidate that big move down by building out the red triangle consolidation pattern just below the S&R zone. If the next impulse move down takes hold, there is a good chance that we will see a move similar to the one when the price action broke below the blue bearish rising wedge, right shoulder. 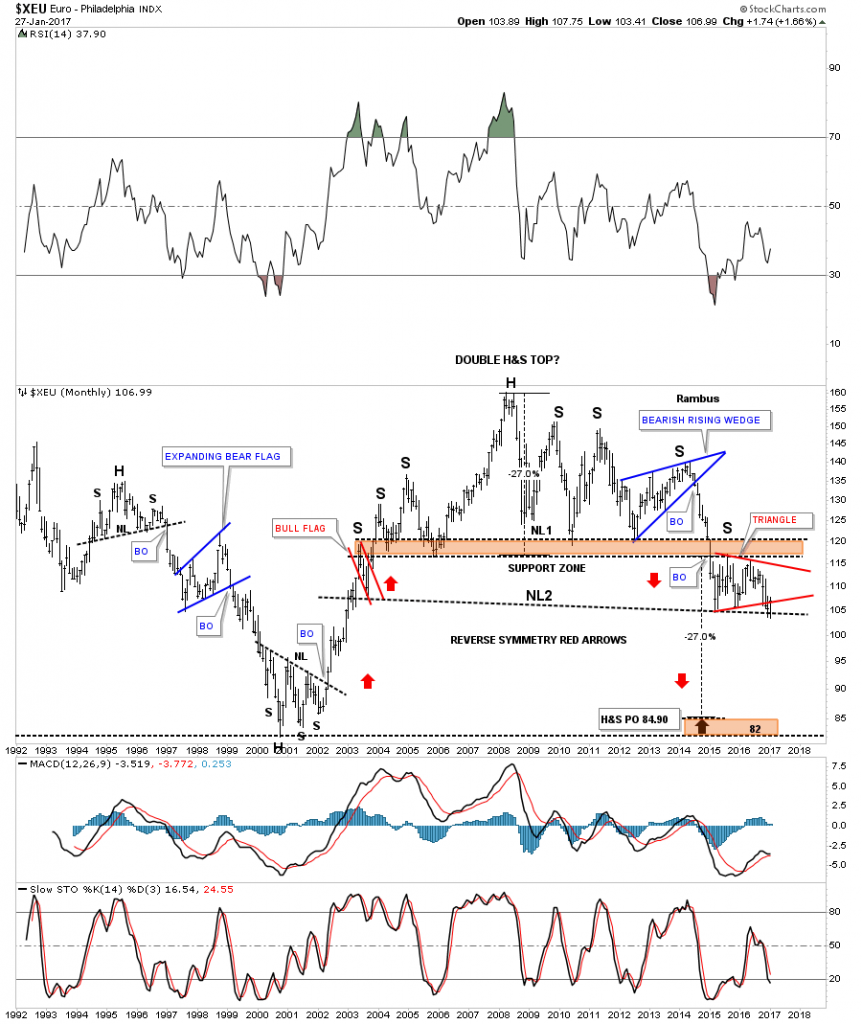 The weekly chart for the XEU shows a close up view of the 2014 impulse move down and the current blue triangle consolidation pattern building out. I have been looking for a backtest to the bottom rail to come in around the 107 area, which was hit this past week. 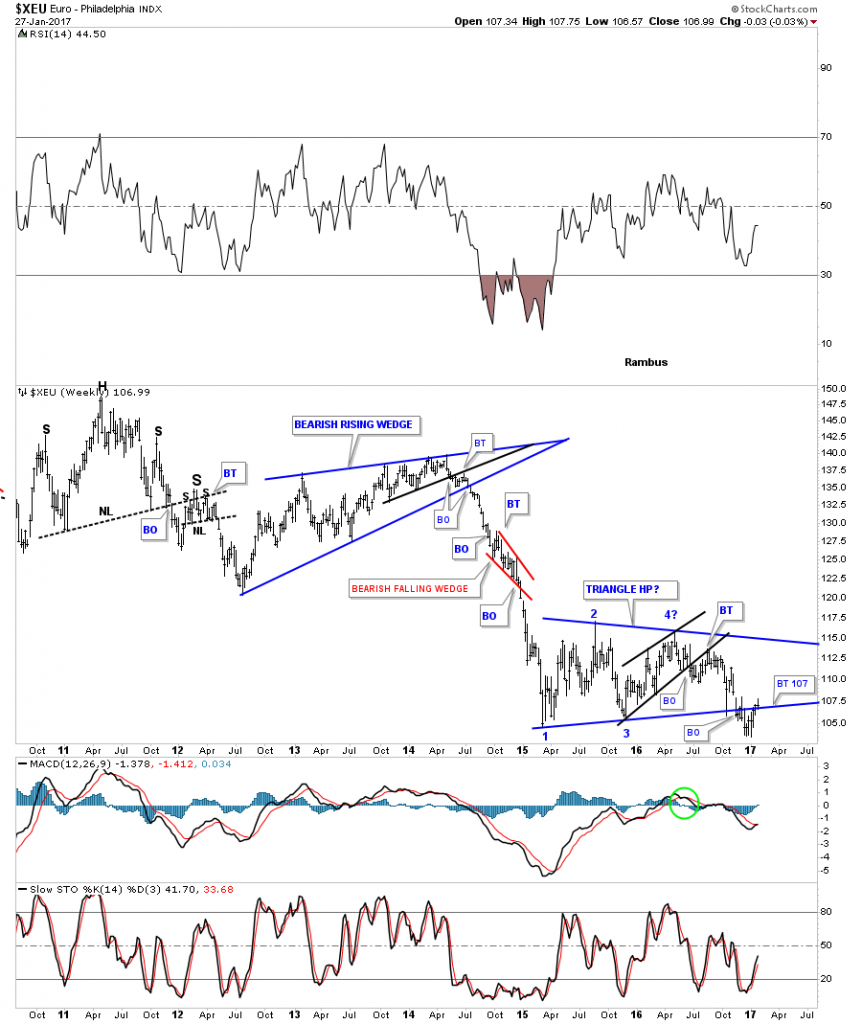 The last chart for the XEU shows why we need to pay attention to what this currency does as gold tends to trade in tandem. It’s not a perfect correlation but close enough. 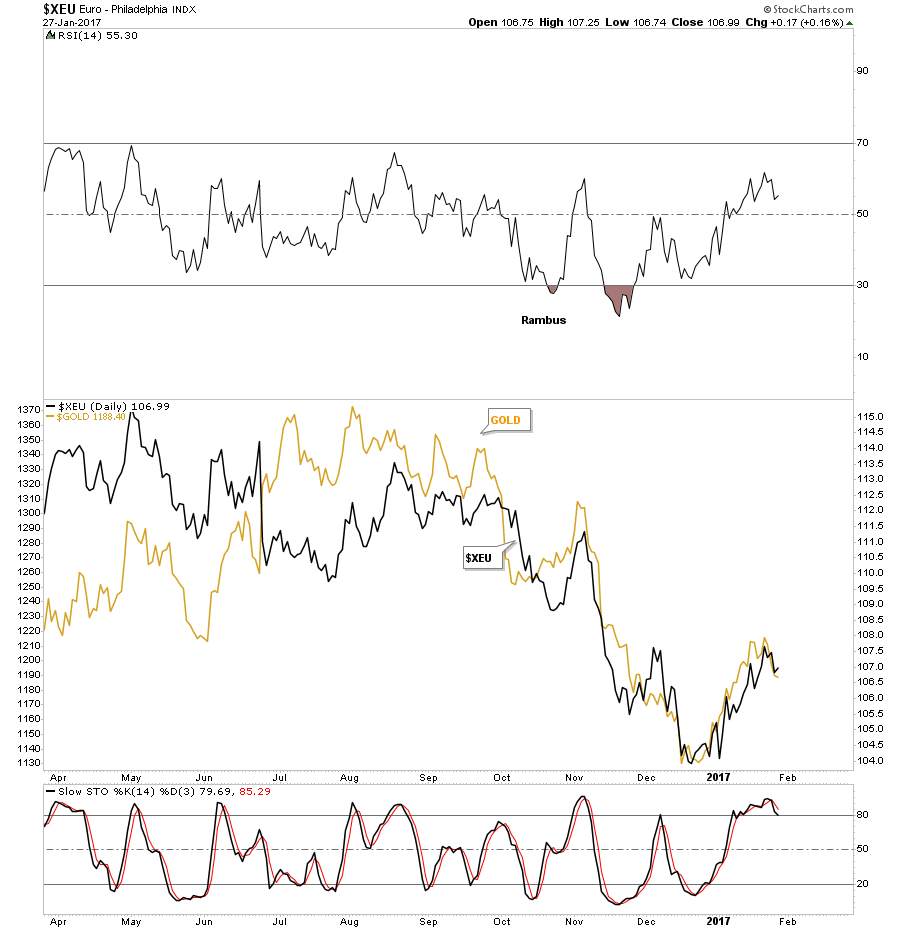 The XJY, Japanese yen, is another important currency to follow if you want to know what the PM complex is up to. In 2011 the yen built out a H&S top about the same time gold topped out. Just like gold, the yen has also been in a bear market, forming a small base in 2015, which gave the yen its first counter trend rally. This counter trend rally took the price action back up to the top rail of the black 5 point triangle pattern which now became the apex. The apex of a triangle is where all the energy is located between the bulls and the bears. Normally they will hold support or resistance depending on the direction of the move. If the apex of a triangle fails to hold support or resistance then you have an end around move, which can be bullish if the move is up, or bearish if the move is down. This chart shows the apex holding resistance. 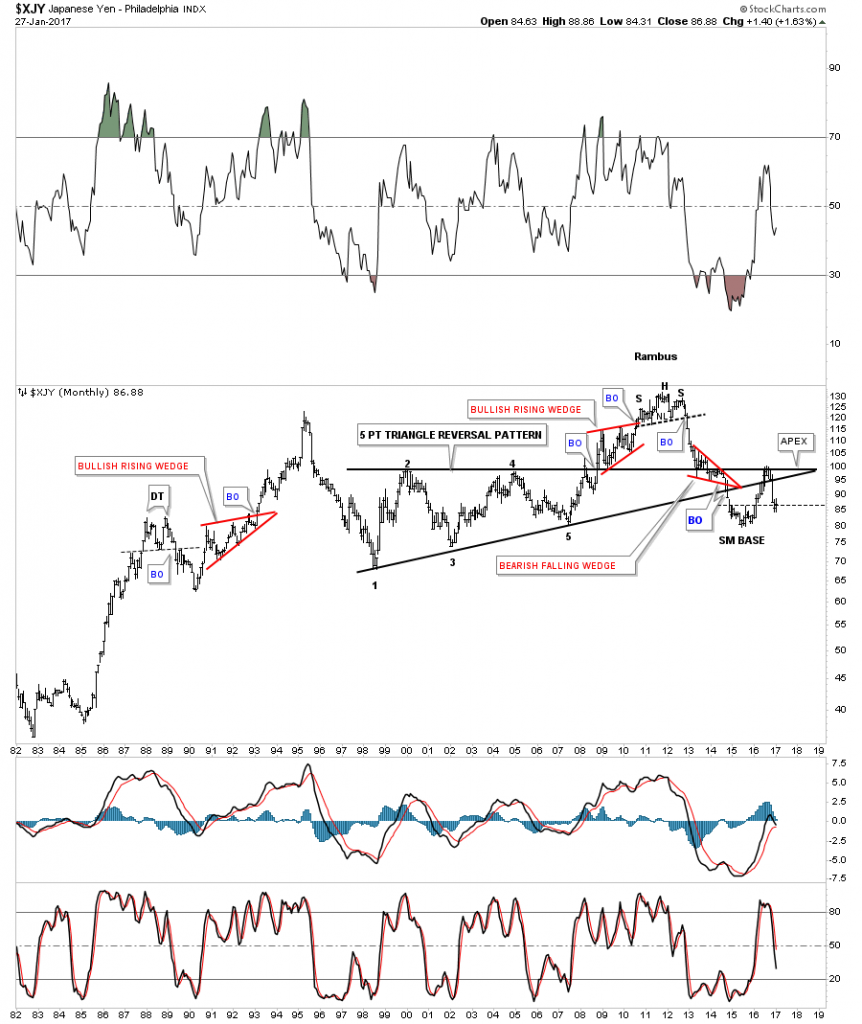 This next chart I overlaid GLD on top of the XJY which shows it has an even closer correlation than gold and the XEU. So how the yen moves, so will GLD. 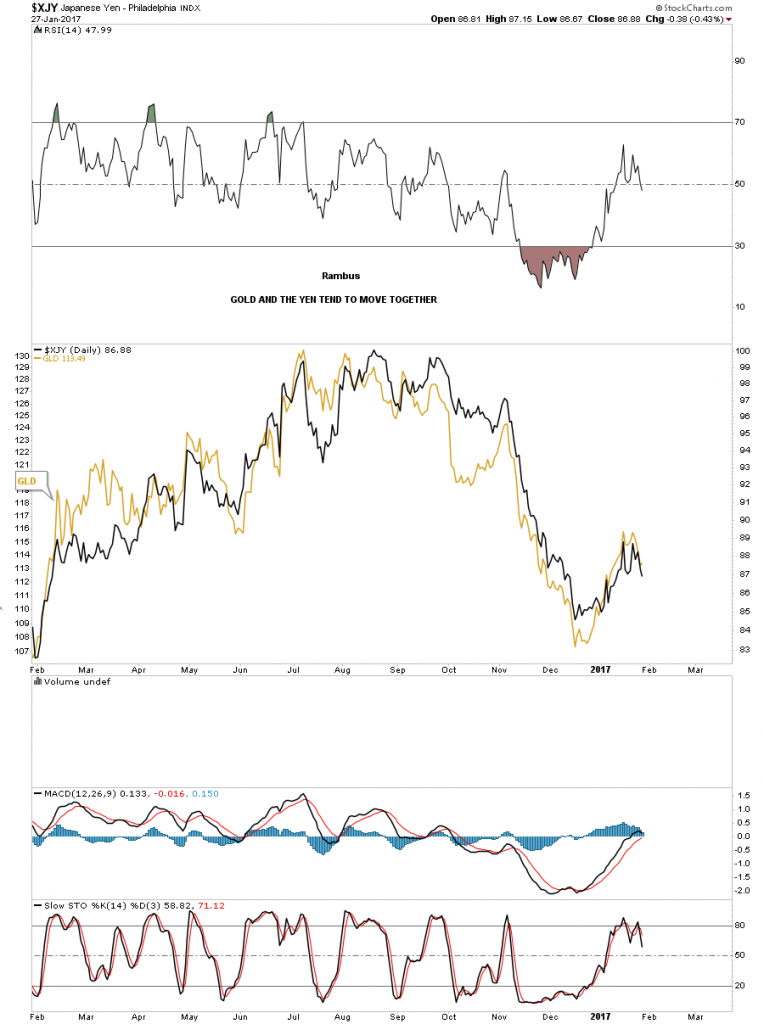 This last chart for the yen I overlaid the HUI on top so you can see the correlation which is pretty strong. You can see there is some interesting price action on the right hand side of the chart as shown by the thin black dashed trendlines. If the yen bounces then the HUI should bounce too. If the yen puts in a double top then there is a good chance the HUI will breakdown below its dashed trendline. It looks like this week is going to be very interesting in regards to these two. 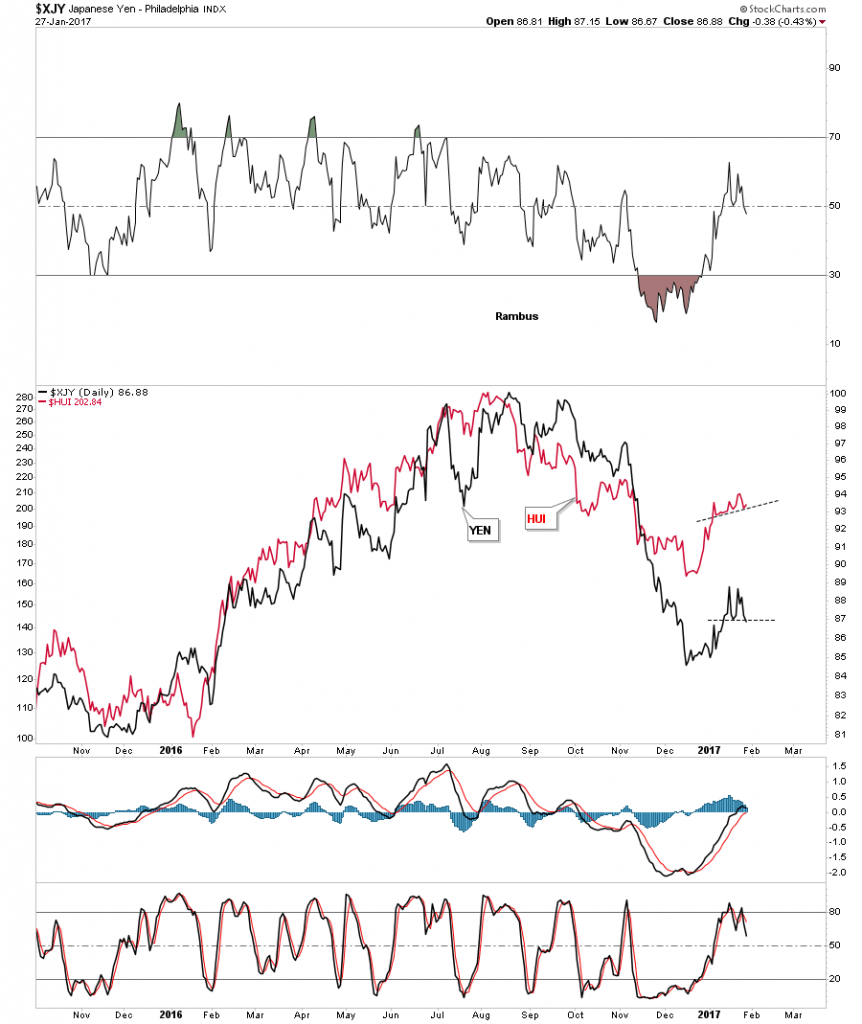 The UUP is a proxy for the US dollar which shows its trading range was a black bull flag. A backtest to the top rail would come in around the 25.50 area where the 34 week ema would also come into play. 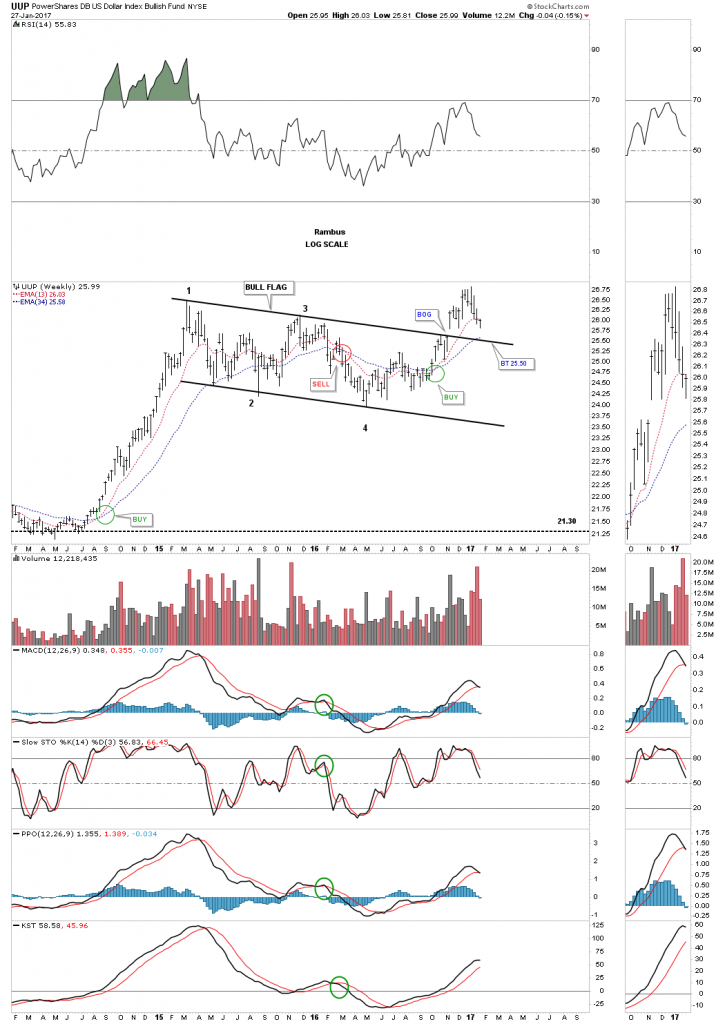 The 10 year weekly chart for the UUP shows its entire history. Note the year and a half blue bullish falling flag that formed at the end of the major downtrend channel which gave the UUP the energy it needed to finally take out that top rail of the downtrend channel. After breaking out of that major downtrend channel the UUP has been consolidating in another blue flag which broke out late last year, and is deciding if it wants to do a complete backtest to the top rail and the 30 week ema. 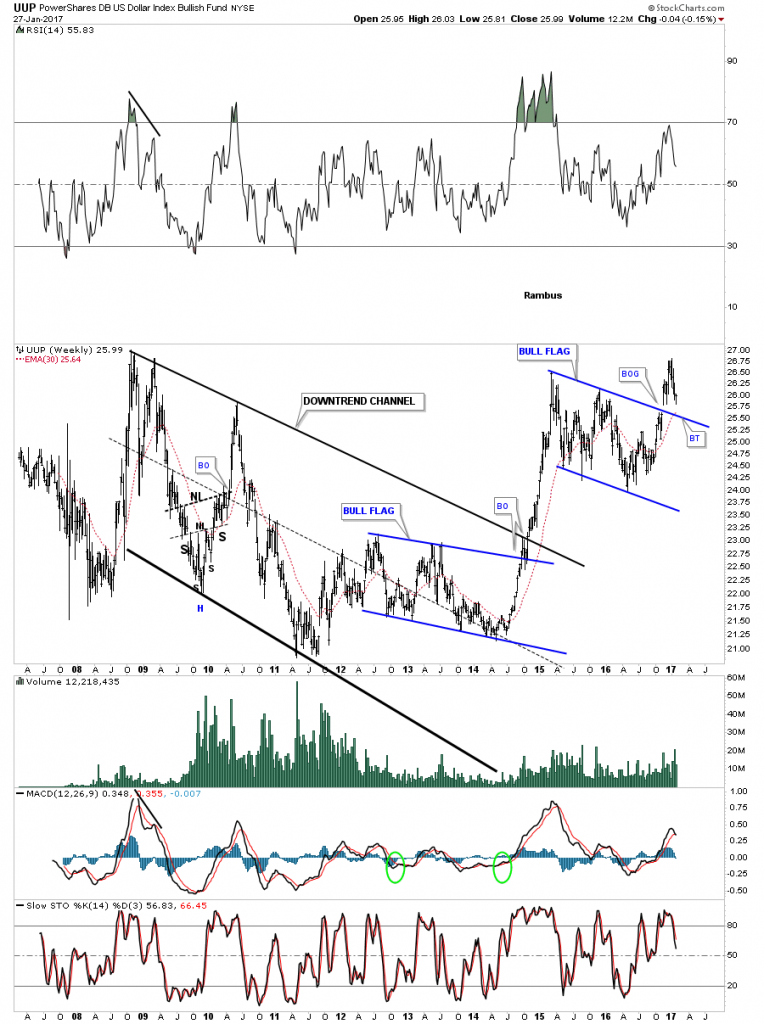 This last chart for tonight is a weekly look at the USDU which has a more equal weighting for the US dollar. We’ve been following the breakout from the blue diamond for three months or longer which is still in play. The 30 week ema does a good job of showing you where support and resistance lies.

The bottom line is, how the US dollar trades will have a direct impact on currencies and the PM complex. They can move together for short periods of time, but in the long run they tend to move inversely to each other. The US dollar is doing a critical backtest that is going to give us some important clues by how it interacts with the top rail of its nearly 2 year trading range. If the US dollar fails to follow through to the upside then the PM complex will enjoy another very strong bull market. Right now the US dollar is at an inflection point in regards to the big picture, which will come to an end at some point. All the best…Rambus 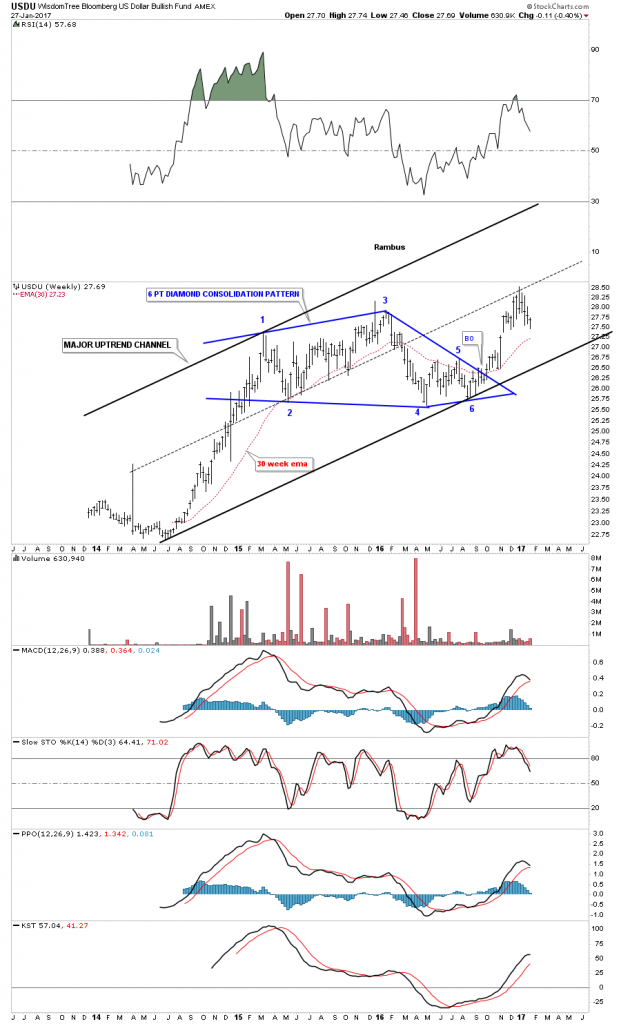