There is no doubt that the US dollar looks bad right now after breaking below the bottom rail of its 5 point falling wedge last week. Before I give up totally on the US dollar there is one thing I’m going to look for first. When all else fails I like to go back to the initial pattern which was a sideways trading range or a rectangle pattern. I’ve seen in the past that when you have a nice tight rectangle with a breakout above the top rail, there can be one very big shakeout move where the price action will decline back to the center mid dashed line, where final support may reside. If the dashed mid line fails to hold support then there are bigger problems. Below is a weekly chart for the US dollar which shows the price action testing the mid dashed center line. 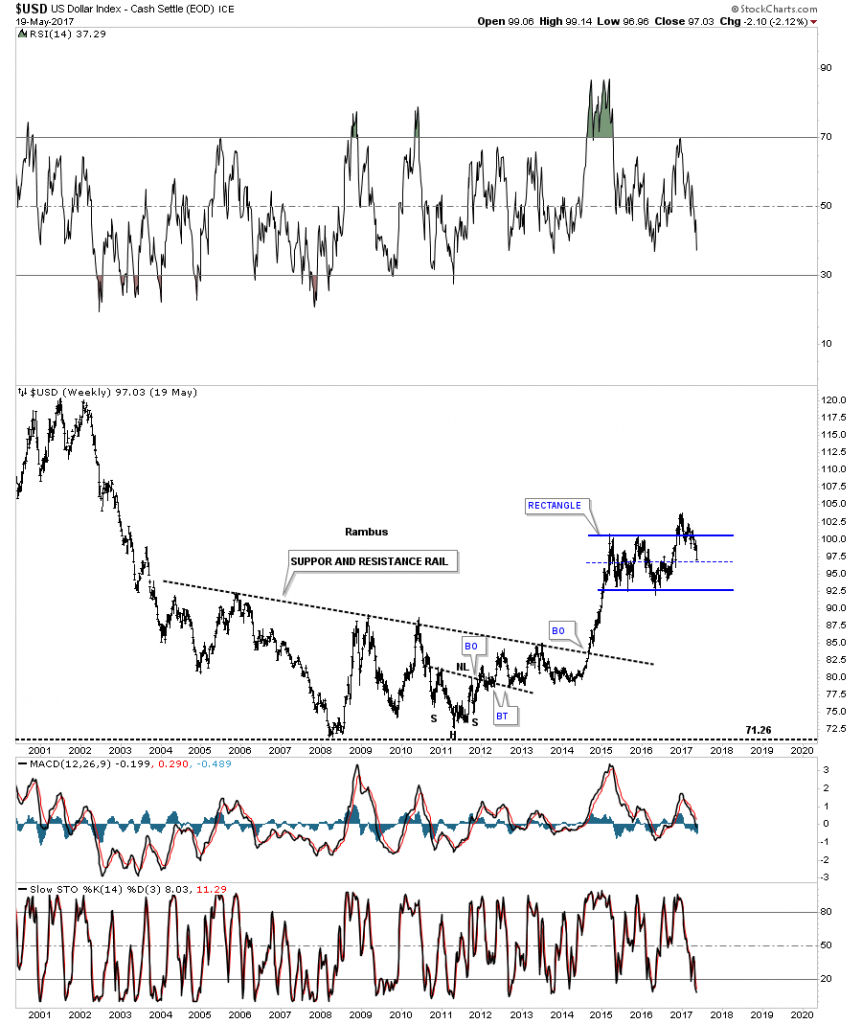 The $US dollar daily line chart. 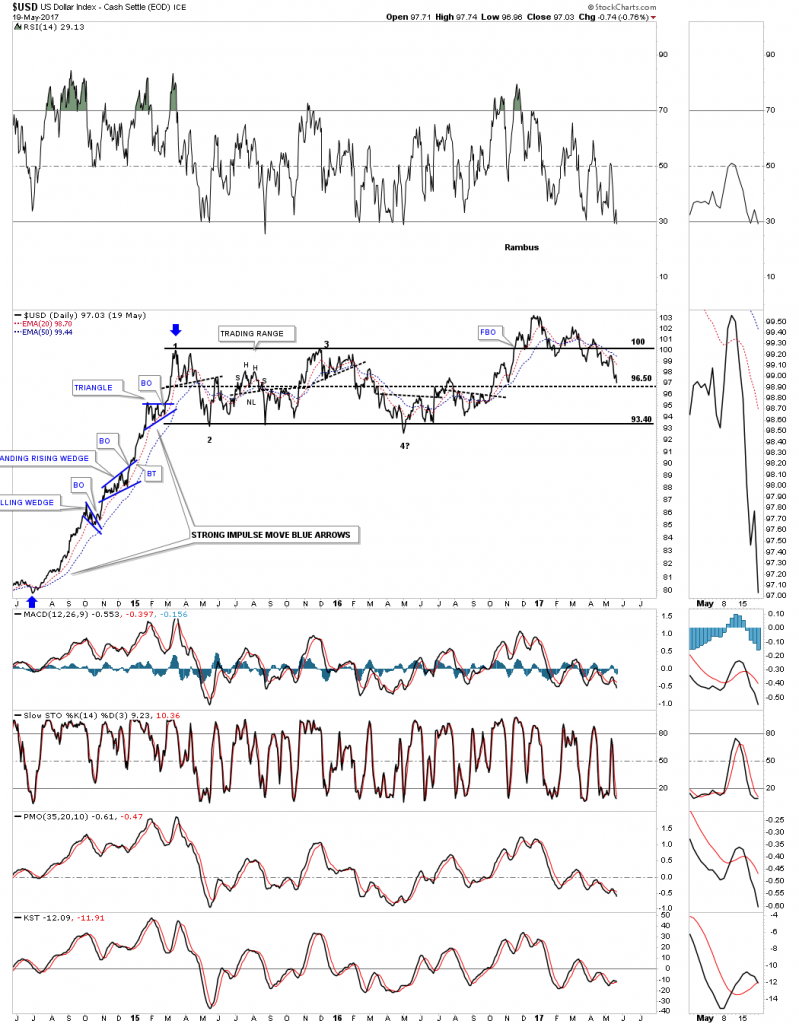 The daily chart below shows a potential downtrend channel with 2 blue consolidation patterns. If the blue bearish falling wedge is a halfway pattern to the downside the blue arrows shows a price objective down to the 96.20 area, which is labeled impulse move. The breakout to breakout price objective is a littler lower at 95.45. Those 2 price objectives come in pretty close to the mid dashed center line on the rectangle pattern above. 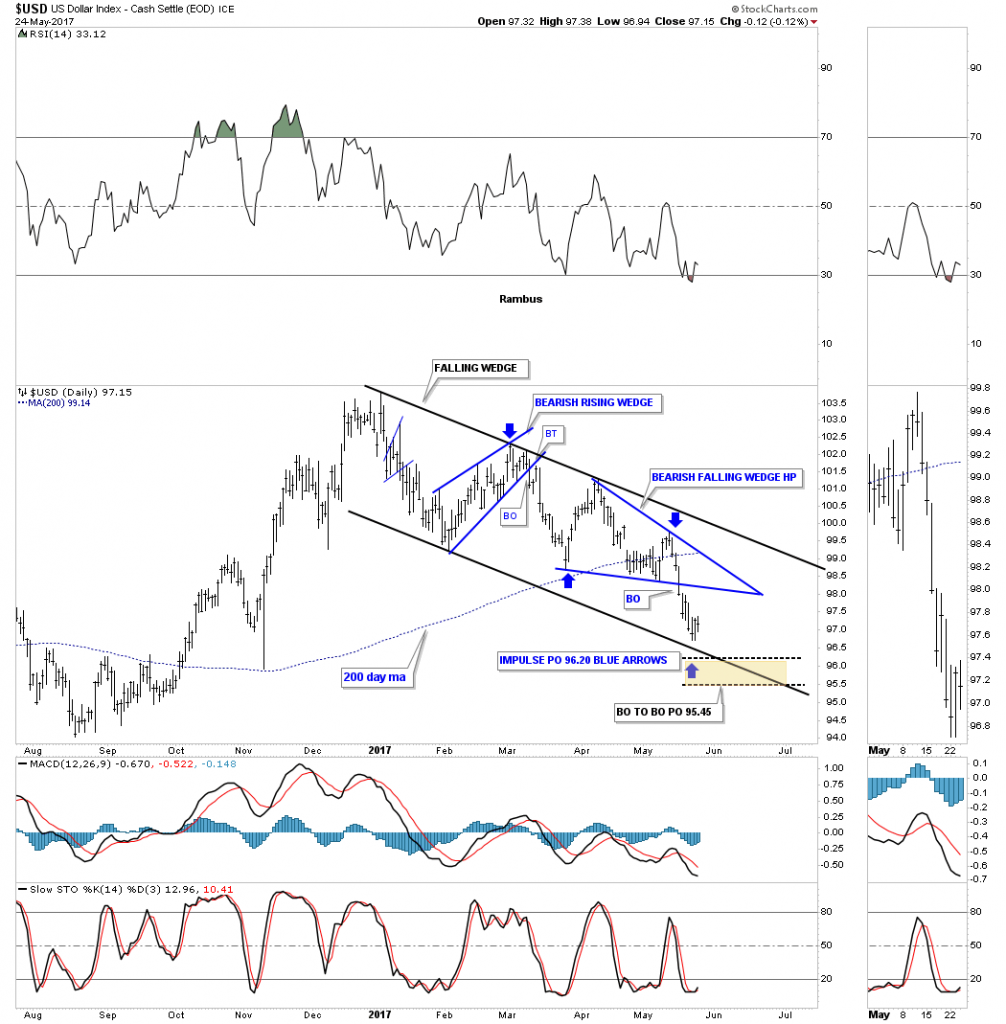 This weekly chart shows how the downtrend channel fits into the bigger horizontal trading range, which is now testing the dashed mid line. A break below the dashed mid line will most likely lead to a move down to the bottom of the rectangle. 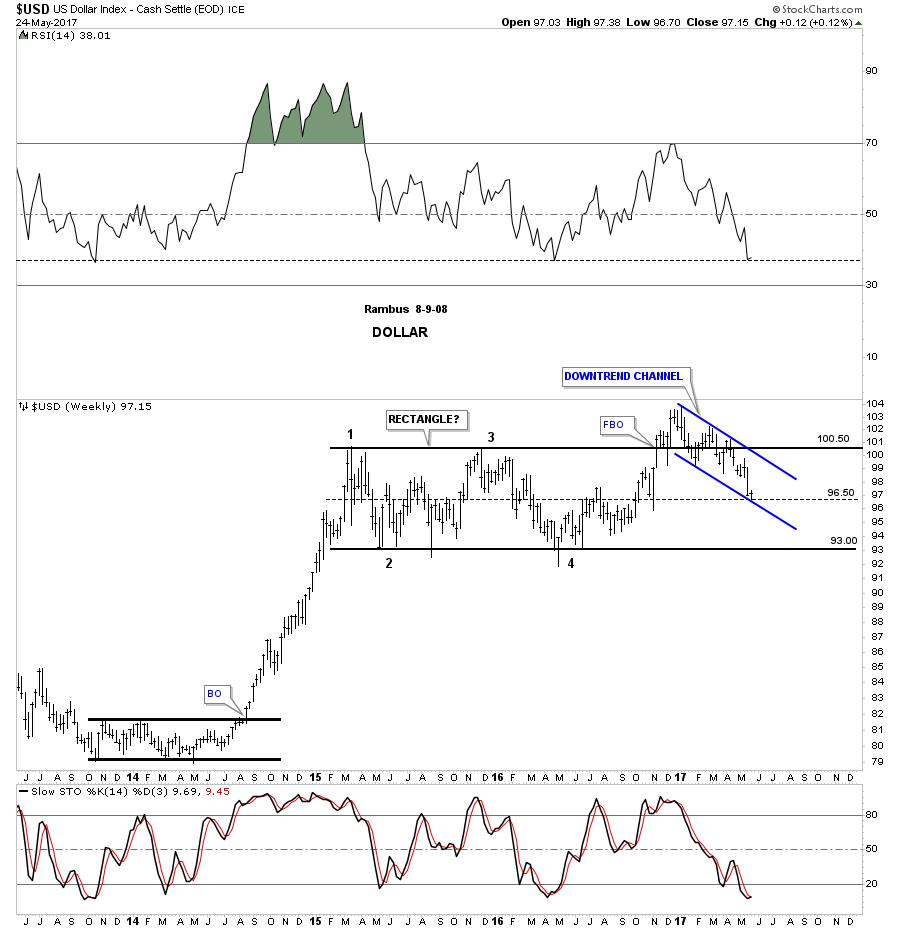 The million dollar question remains, is the 2 year trading range a top or a consolidation pattern to the upside? 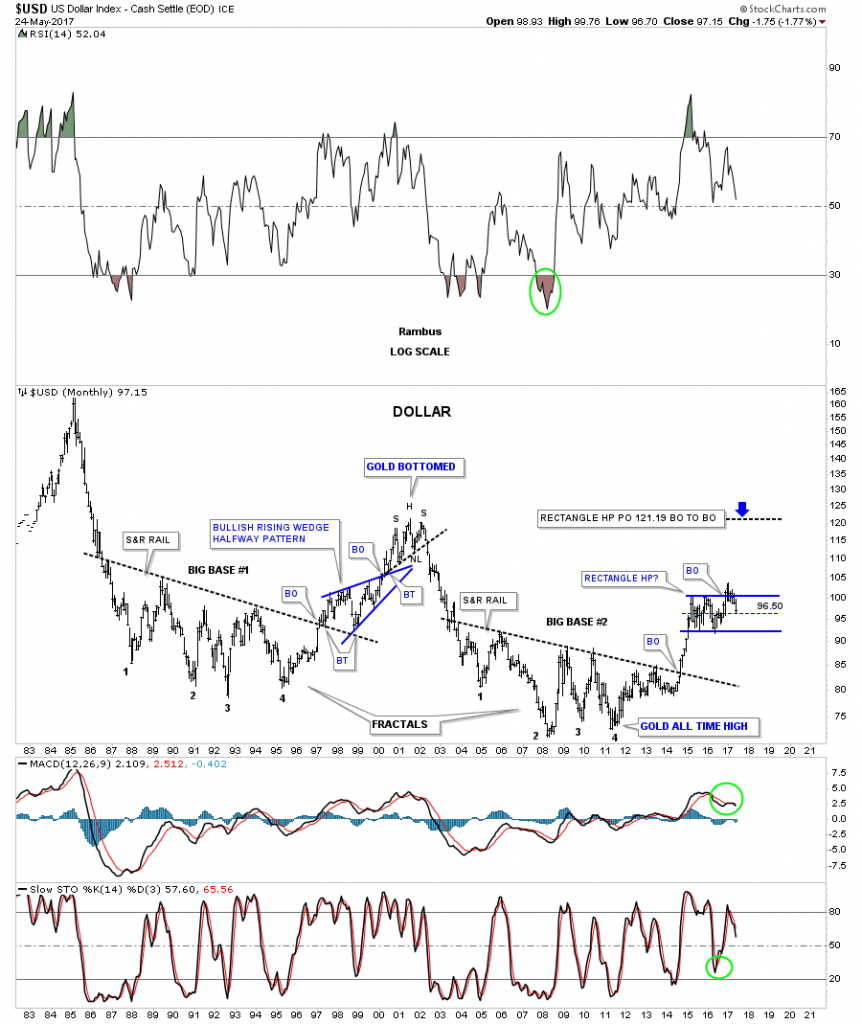 Below is a daily chart for the UUP which shows the original 5 point bearish falling wedge. I added a parallel bottom rail to the top rail which shows a possible bull flag if the bottom rail at the 24.85 area holds support. 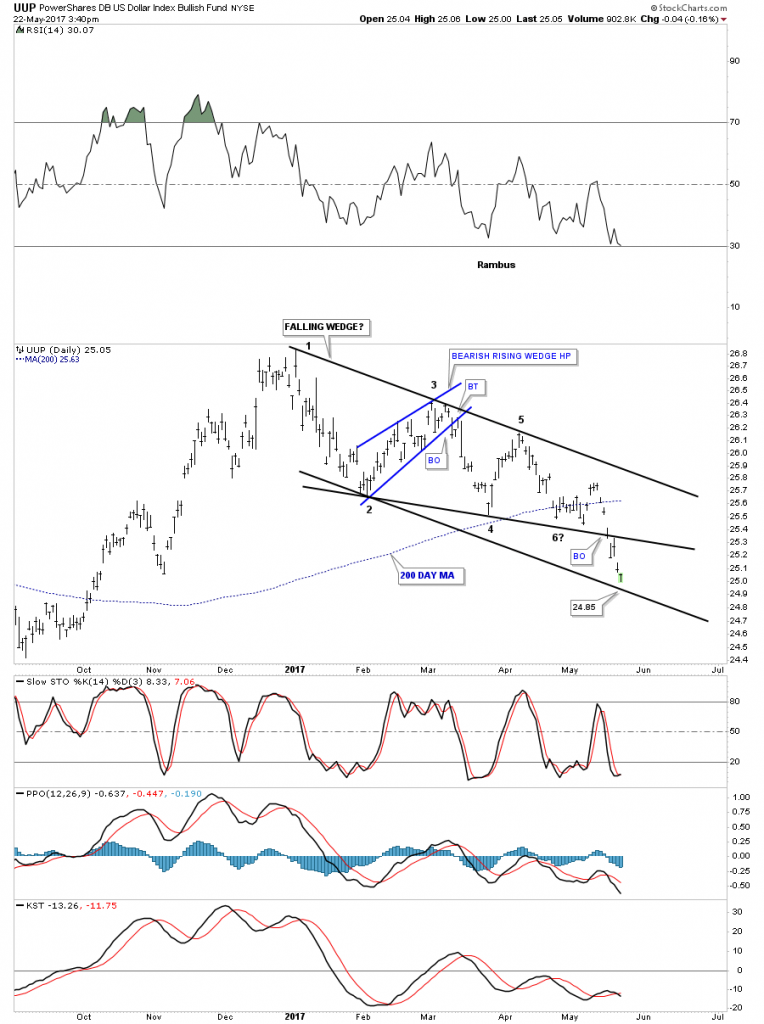 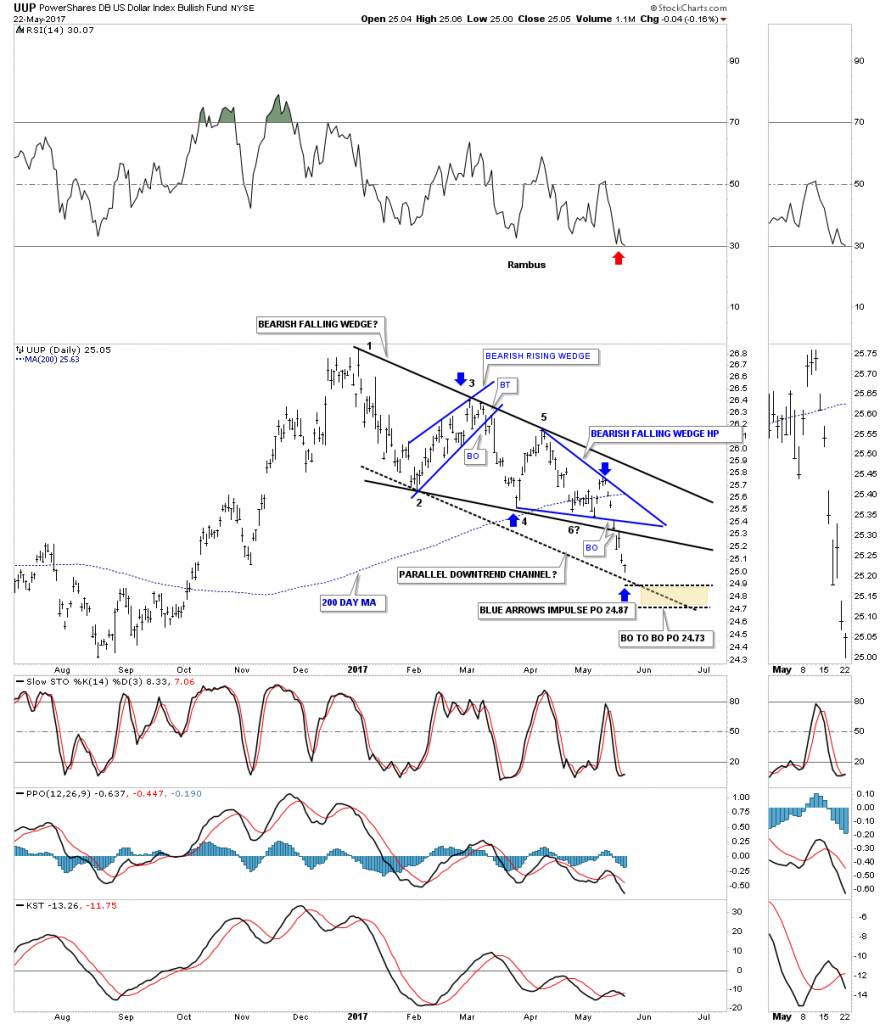 This next chart is a daily look at the USDU, Dollar Index, which has a more balanced makeup of currencies. Monday the price action hit the bottom rail of the falling wedge completing the 5th reversal point. If the falling wedge is going to be a bullish falling wedge, the USDU will have to start rallying and breakout above the top rail. Note the 4 point rectangle consolidation pattern that formed on the left side of the chart. From a Chartology perspective the top rail area should hold support when backtested from above, as shown by the top rail extension line which is now being strongly backtested. 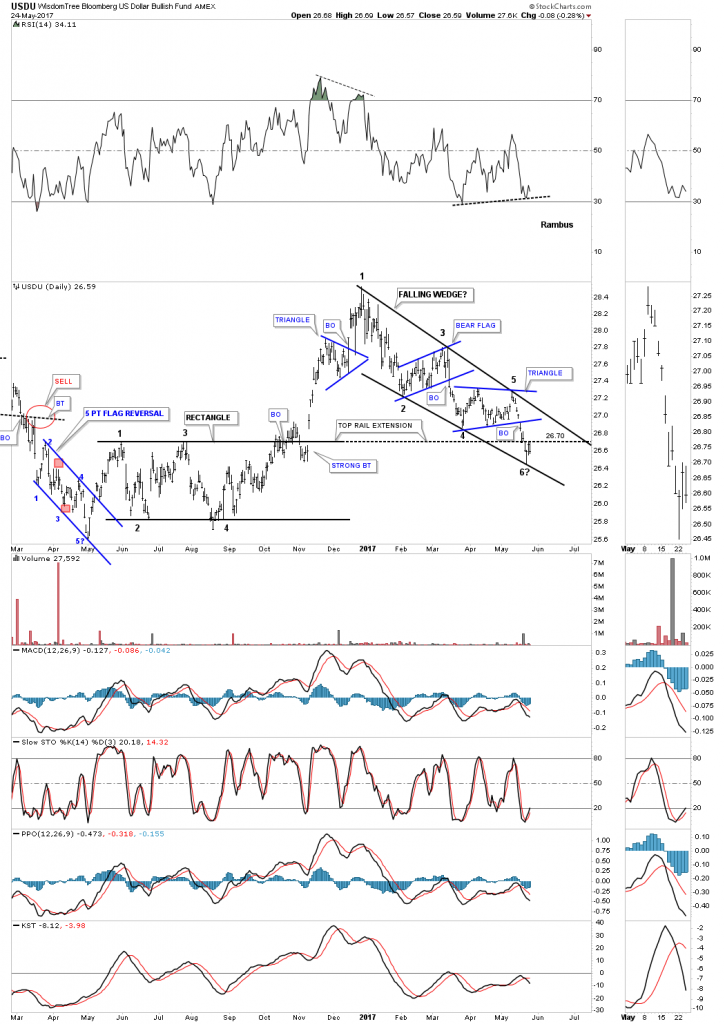 It’s been awhile since we last looked at this 40 year chart for the US dollar that shows a massive falling wedge with a breakout and 2 backtests to the top rail at 92 which is also the neckline extension line taken from the 2000 H&S top. From the 2011 low there still is a series of higher highs and higher lows in place. A break below 92 would change that. 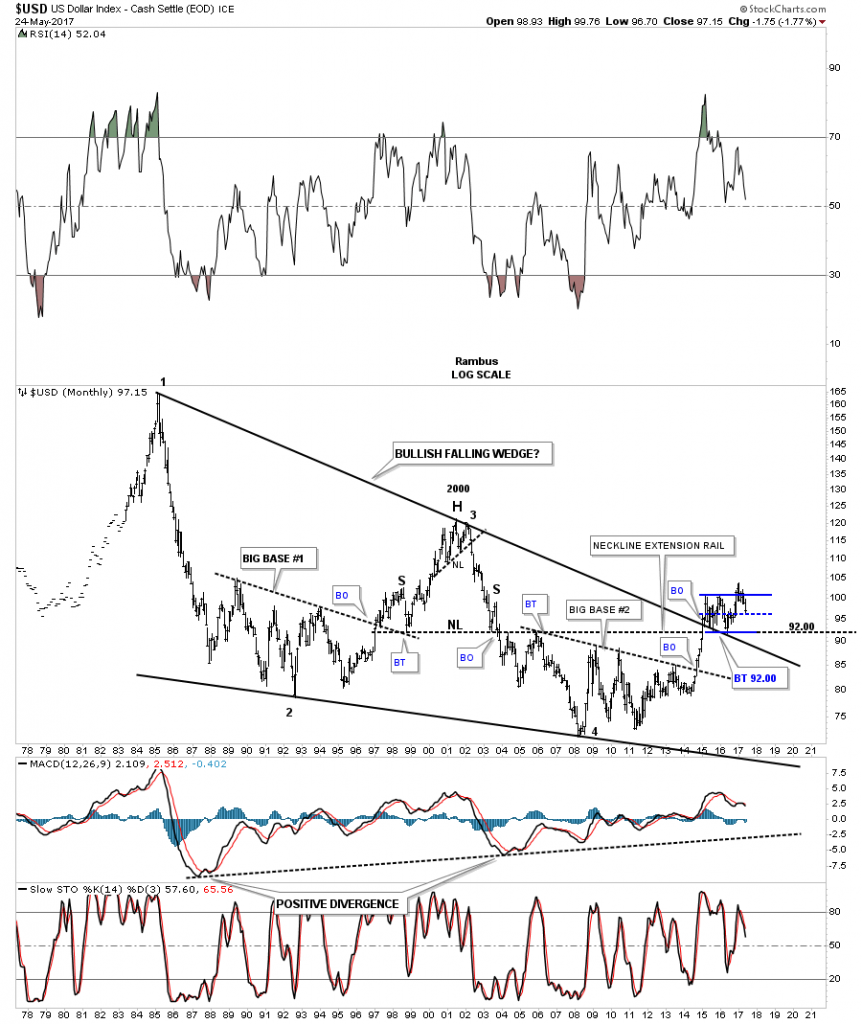 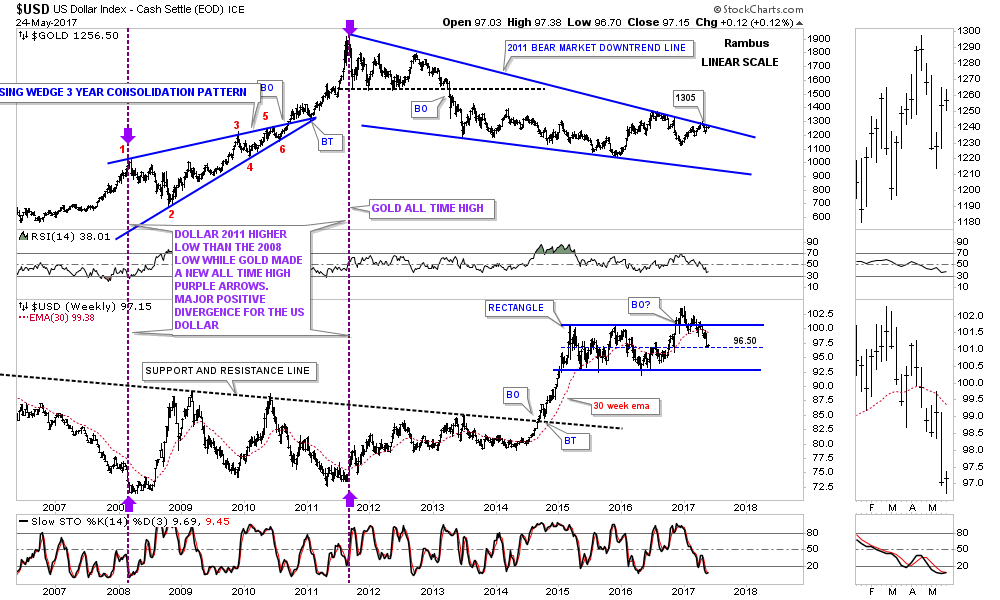 This next chart is another combo chart which has the US dollar on top and gold on the bottom which shows the inverse correlation these two generally have. The last time we looked at this chart the US dollar was still trading inside the red falling wedge and gold was still trading inside the red rising wedge. The only change I made was on the US dollar chart where I made the bottom rail of its uptrend channel parallel to the top rail. Gold was already in a parallel downtrend channel. 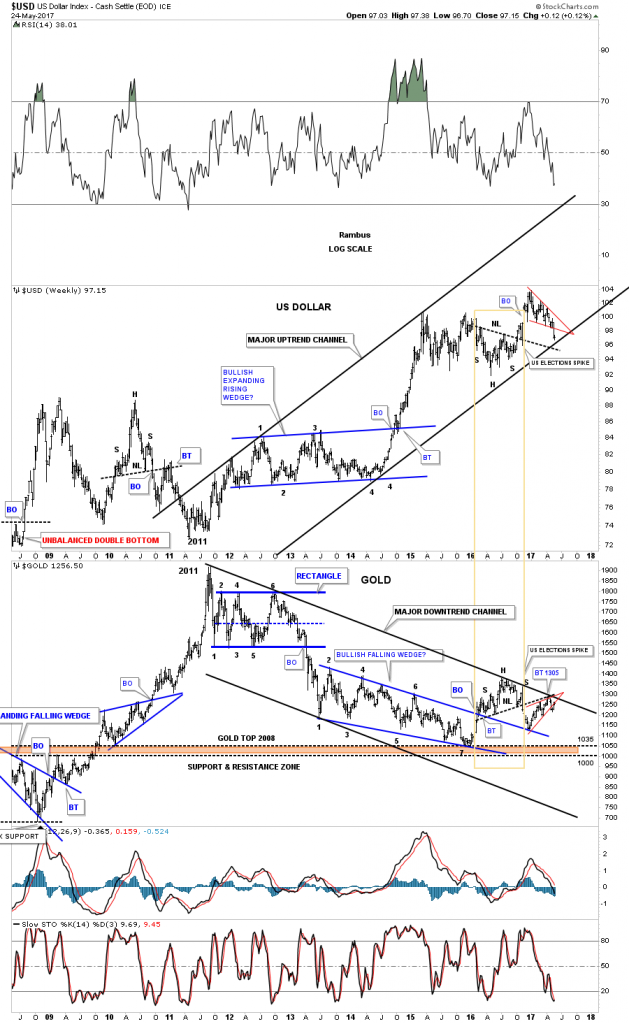 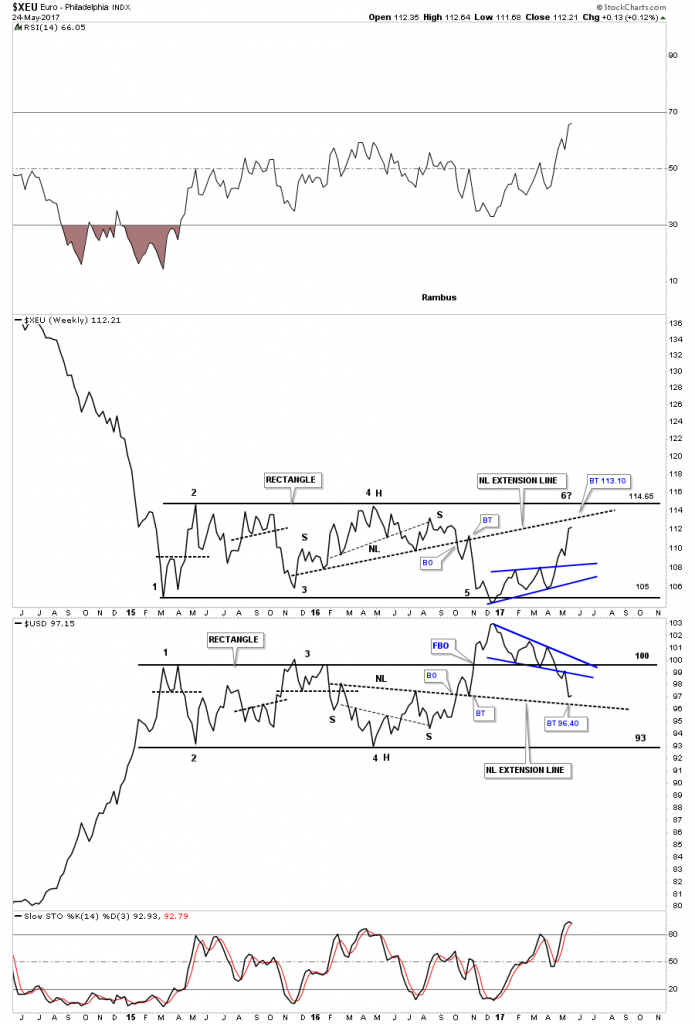 This last chart for tonight is a ratio combo chart which has the US dollar to the XJY on top, and gold on the bottom. Keep in mind we’ve been following these major trend channels since late last year before gold hit its top rail at 1305 and declined, so up to this point they have been following the script to a tee. The big question is, will they continue to follow the script to a tee? As you can see the ratio chart on top is building out a blue falling wedge while gold has built out a blue rising wedge.

It’s not everyday that you find charts like this at a very critical juncture which can change the major trend in a big way. Up to this point nothing is broken yet in regards to the big picture, but that could change in a heartbeat.

The Dollar is now at the currency equivalent of The Little Big Horn. Stay tuned. 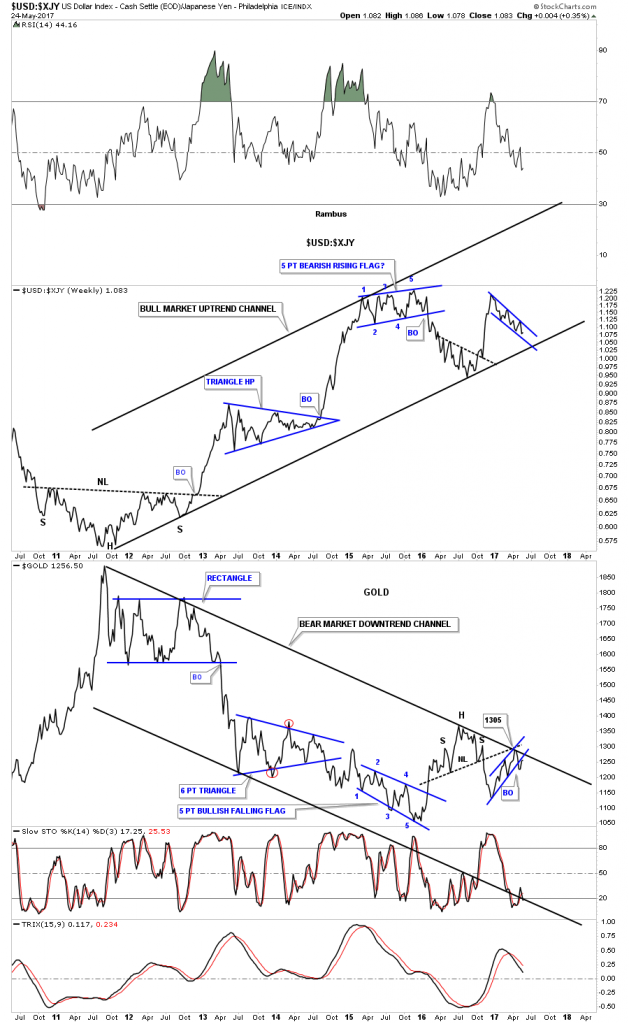