I’m going to use this long term weekly chart for the HUI as a proxy for the other PM stock indexes. This chart also shows you why I’ve remained very cautious on any PM stock rally.

What we know for sure is that the HUI rallied strongly out of its January 2016 low to the August 2016 high which was very impressive. At the time it looked like the initial impulse move in a brand new bull market which was a welcomed sight after 5 years of bear market price action. At the 2016 top is where we should have expected some type of consolidation pattern to start building out to consolidate that massive gain, but what we got is not what we wanted to see.

I remember taking some flack from several newsletter writers when I posted a possible H&S top in place. I was told that everyone and their brother could see that H&S top so it would fail, the new bull market was born and that was that. From my perspective that H&S top formed exactly where one would expect to see a reversal pattern form which is at the end of a big move. If the bull market was truly underway the HUI should have started to chop sideways creating a consolidation pattern instead of a reversal pattern.

After the neckline gave way there was a 5 week backtest to the underside of the neckline that confirmed for me the H&S top was valid and correct. After the backtest was complete the first impulse leg down took about 8 weeks to complete. That low is marked by reversal point #1 at the beginning of our current triangle trading range. Note how the neckline also held resistance on the second backtest at reversal point #2 again adding more confirmation the neckline was hot and to be respected.

Another thing we know for sure is that the HUI has been chopping sideways for over a year now consolidating that first impulse leg down. The markets usually don’t make it easy to see the real picture until well after the fact. As you can see our current one year triangle had a false breakout below the bottom rail and then a rally back into the triangle which at the time negated the breakout to the downside. Discipline dictates that you have to respect the fact that when the price action closed back inside the triangle that we had a false breakout and to start looking at the top rail for resistance.

We have looked at many triangle patterns in the past that morphed into a bigger triangle. The red circles show how our current triangle has morphed into a slightly larger triangle. Sometimes we see a symmetry false breakout of the top and bottom rails which are about the same amount. On the HUI we have a symmetry false breakout below the bottom rail with the counter trend rally failing to make it all the way up to the top rail of the triangle trading range. If you take the false symmetry red circle below the bottom rail and added it to the failed rally high you will see a complete reversal which we could be label as a 5th and 6th reversal point.

After the failed rally attempt back inside the triangle the HUI declined once again closing below the bottom rail which puts the triangle back into the consolidation pattern to the downside category. The first thing I’ll be looking for is for the HUI to make a lower low for confirmation the impulse move down is in progress.

I know this isn’t what most of you want to hear, but this is what the charts are strongly suggesting. If I’ve said this once I’ve said it a million times, “the only rule in the stock market is that there are no rules.” 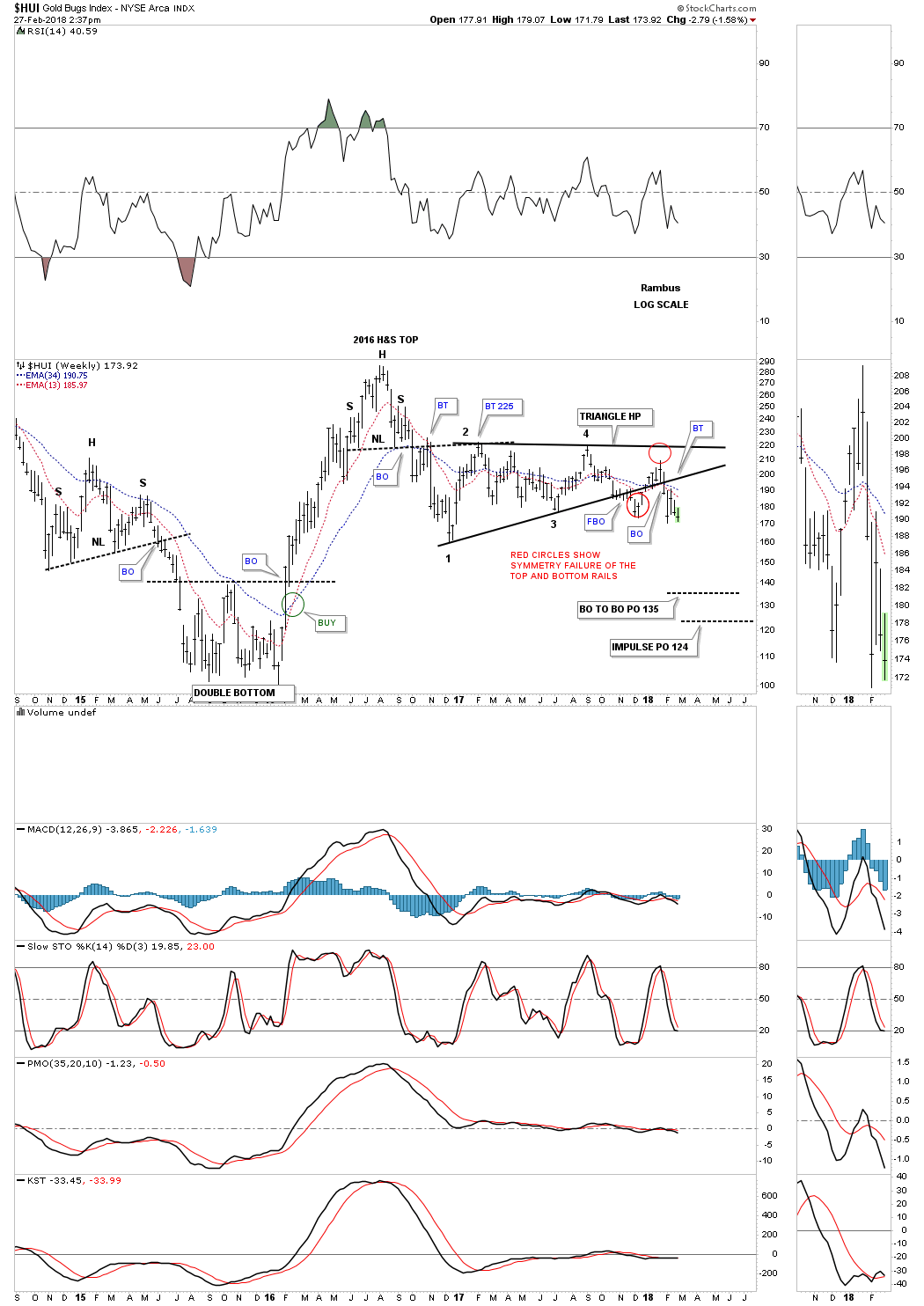 In a perfect Chartology world a decline down to the bottom rail of the major uptrend channel, around the 120 area, would be just what the doctor ordered. That type of move would shake out all the weak hands and lay the groundwork for the resumption of the secular bull market that began in 2000. After nearly seven years of bear market price action we may now be witnessing the light at the end of the tunnel. 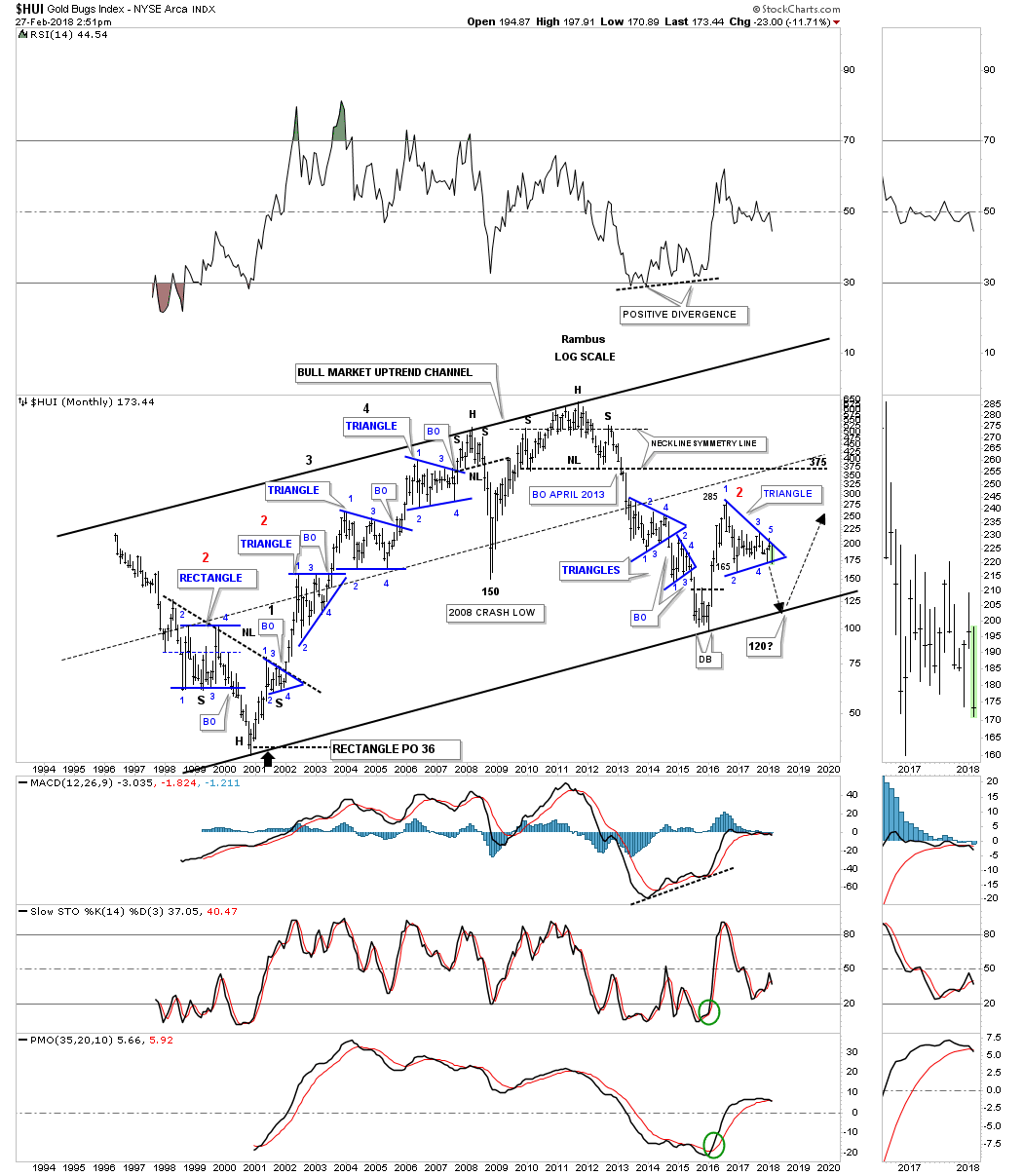