I am making a market strategy adjustment and I thought I would pass it along.  It’s actually consistent with the charts that Rambus has been presenting so I thought best I post it on the main page. Why the change?  Well frankly, my most respected Macro strategist turned a light on in my head and I realize I am most likely wrong footed towards the gold market and you know the old market adage “It’s ok to be wrong, but not ok to stay wrong”.

As you know last weekend I presented a possible bullish interpretation of the GDX based on market internals of that index.  After this week’s action it appears this pattern has failed as it violated its support.  Unless this is some sort of head fake (as occurred in the Jan 2016 bottom) gold and gold stocks are signaling lower lows ahead.  I will explain why later. 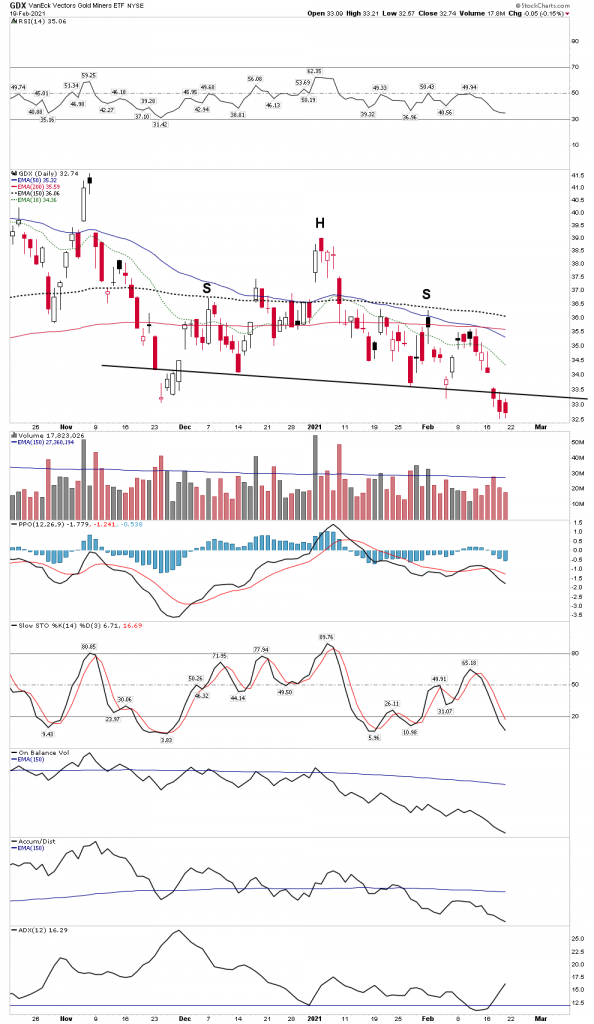 Above: Some may still hold out for the fleeting argument that the violation of the NL was done on lower washed out volume and could be a head fake before an advance (as occurred in Jan 2016), but I believe the macro argument supports a continued decline in the gold market, details to come.

So who is the Macro strategist sparking such a change in my thinking?  He is Felix Zulauf the venerable Swiss money manager and former Barrons roundtable veteran.  My first exposure to Felix was back in 1992 when he was new to the Barrons roundtable.  Most of the roundtable contributors are pretty worthless to me.  People such as Abby Cohen, simply spout Goldman propaganda….worthless.  But Felix, I recognized right away was a different beast as he seemed fiercely independent and deep thinking.  I recall the main takeaway from that issue in 1992 was his table pounding idea of Potash of Saskatchewan (POT in those days).  If you will indulge me I will tell you the story as it was one of those great lessons for me that drove home the old Jesse Livermore principle of Be Right-Sit Tight.

Felix, built the case that this was a China play.  Back then I would not say that China was an unknown investment theme, but it certainly was cutting edge. There were a few China funds  to invest in, but they were sucker plays.  Felix explained that investing directly in China was for fools.  He compared this to English and French investors piling huge sums into the great emerging market of the USA back in the late 1800’s.  It was an incredible real growth story, but few if any ever made any money out of it.  They got scammed and ripped off by ruthless  local insiders and the same thing was going to happen today in modern  China.  Well Felix turned out to be right.    So his idea was to invest in a fertilizer company trading on the NYSE.  Huh?

His investment thesis was that POT had the youngest highest grade potash mines in the world with the shortest delivery route to China.  At the time Germany and Morocco were principle suppliers.  As the Chinese raised their standard of living they would move up the protein latter from rice to more meat.  This requires 7X the agricultural input to achieve.  Each year the world’s available agricultural base actually declines so the only way to achieve increased production was through higher yields.  Of course the way to higher yields is through fertilizer.  Incidentally, POT was merged into Nutrian (NTR) and the royalties to those  mines in Saskatchewan were bought by Brian Dalton’s Altius Minerals (ALS.to).  How he bought them is a great story for another essay, but they are considered the highest quality royalties in the world.

So Felix’s idea made a lot of sense to me, but the stock was trading just above $1 on the NYSE.  Honestly it looked somewhat flaky, so instead of buying I decided to watch it.  Well I watched it alright, as it climbed to $2.50 with me on the sidelines watching!  I couldn’t stand it anymore so I bought my full position of 5,000 shares.  A good chunk of money for me at the time.  It kept powering upside.  Finally in about a year it reached $12 and I decided to take my profits. This was a big score for me and shamefully I thought I was a genius.  But mind you nothing had changed in the investment thesis .  Only the price of the stock had changed.

So now here we get to the punch line.  Or should I say my object lesson.  This stock was purchased right at the beginning of the great China buildout and commodity bull market.  If I  had seen this as a coffee can investment, as I should have and just sat tight until the commodity bull market blew its top off in 2008 can you guess how much I could have made?  I will tell you: Potash eventually peaked around $240/share…gulp.

So instead of a $48k profit it was possible to have bagged a profit of $1.2m.  I know this is all hypothetical, but you get the point.  This was my introduction to Felix.  Since then I have consumed every little scrap of rare public information that he puts out.  His macro insights are invaluable and over the past 30 years I have learned to listen to this man. Over the past few days I have reviewed in detail his recent interview with Raoul Pal where he laid out his macro view over the next year and I believe it fits what Rambus’ charts are showing.  Here are his main points:

Gold Market– Peaked in August 2020 after doubling. Now entered cyclical bear market within context of secular bull market.  This decline likely to last 1 year.  When bull market resumes it will likely run for 2-3 years into 2023-2024. He is buying quality gold stocks now on the dips.

Stock Market- Stocks typically rise in 7 year cycles.  There is also a 4 year cycle.  He sees this market topping late summer 2021 to possibly early spring 2022. The cyclical bear market would then last until the 4 year cycle low of late 2023 to 2024.

Commodities- These are in a long term bull market, but are also set for a correction.  Once the general decline comes they will likely decline as well

US Dollar-A decline leg in the USD typically lasts 7 years, therefore the USD likely has at least 4 more years of decline ahead.  A decline to 70 is to be expected, however a rally is now due likely to begin this summer and to continue through a hard decline in stocks.  (Plunger’s comment: I could see this putting in the final blow to gold stocks once the USD rally commences)

US Market Crash-He sees 2021 as analogous to 1987 where a cocktail of toxic elements led to a full on market crash.  Chiefly if UST 10 yr yield approaches 2% and the USD continues down it sets up the environment for a crash.

So we see opportunities for traders.  Try to catch a correction down in the general stock market soon then a several month rally back up, to be followed by an end of cycle decline in the second half of the year with a chance of a crash kicking off the cycle.

Taking Another Look at the Gold Stocks

With this analysis in mind let’s take a fresh look at the gold stocks with new eyes.  This week the GDX violated its NL, thus showing it’s hand.  Looking at the weekly chart it would be fairly logical to conclude that the obvious place to find support and even possibly end the correction would be the top of the rail drawn from the 2016 highs.  Rambus has highlighted this numerous times over the past few weeks: 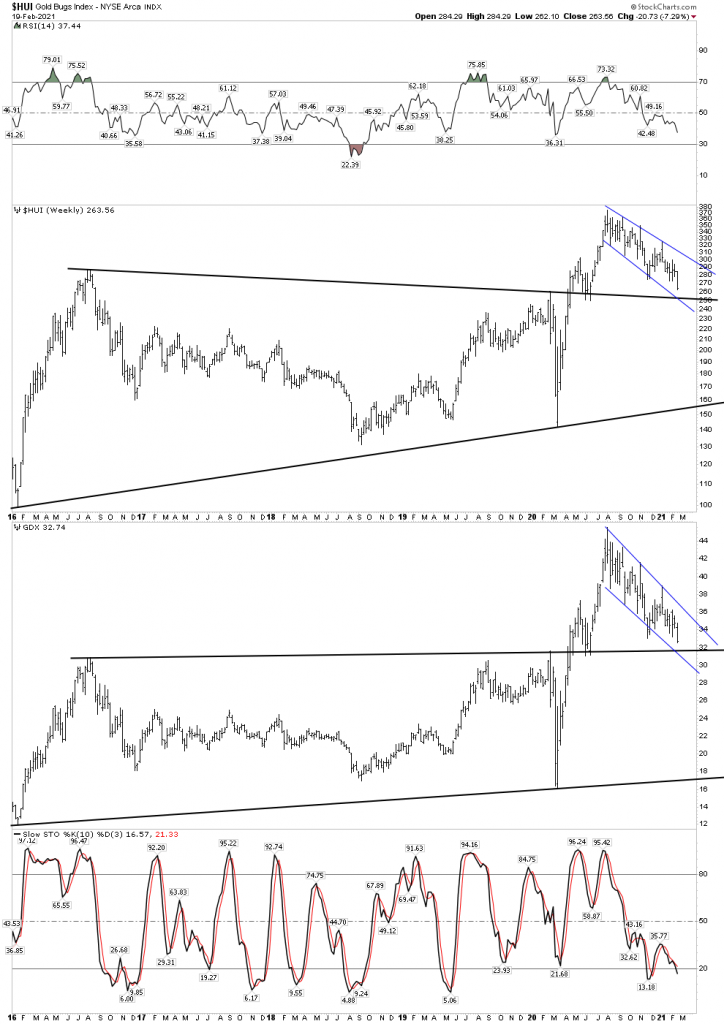 But of course in the words of Joe Granville : what is obvious is obviously wrong”

Rambus has shown that there is a H&S inside these “bull flags” and could actually provide the energy to break down through the resistance line.

This is all starting to fit now.  We can now see a measured move decline filling those pesky unfilled gaps down around 200 in the HUI.  It’s painful to contemplate, but this is about facing reality. Felix’s macro perspective also gives us the fundamental reasons for this to happen. 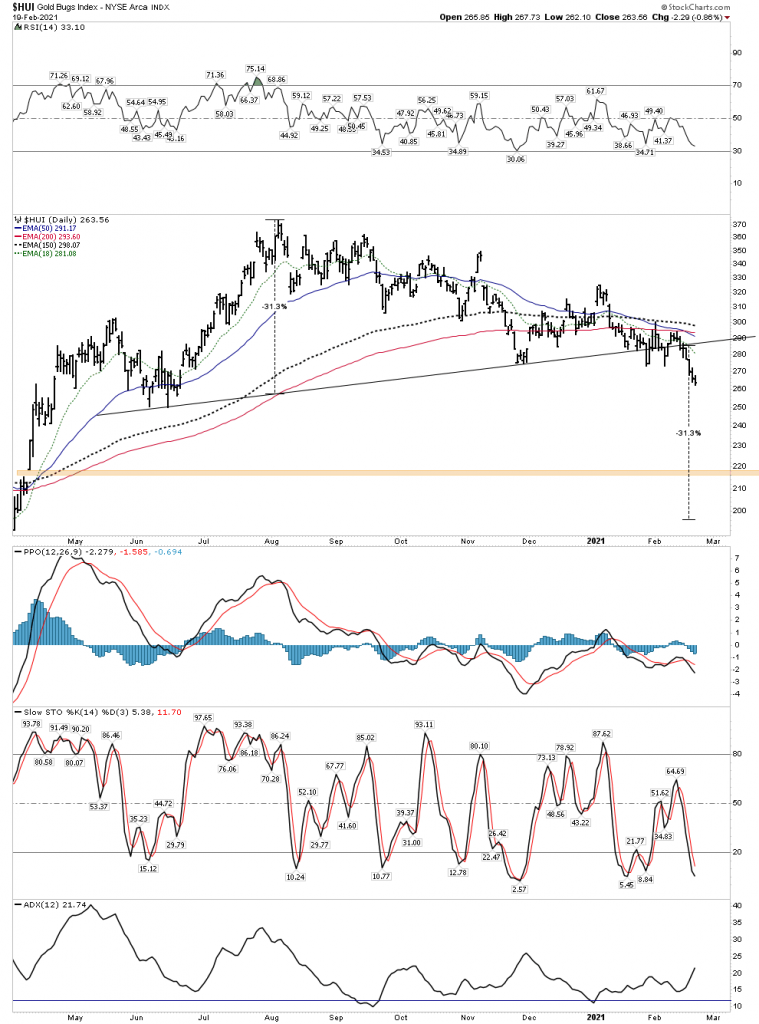 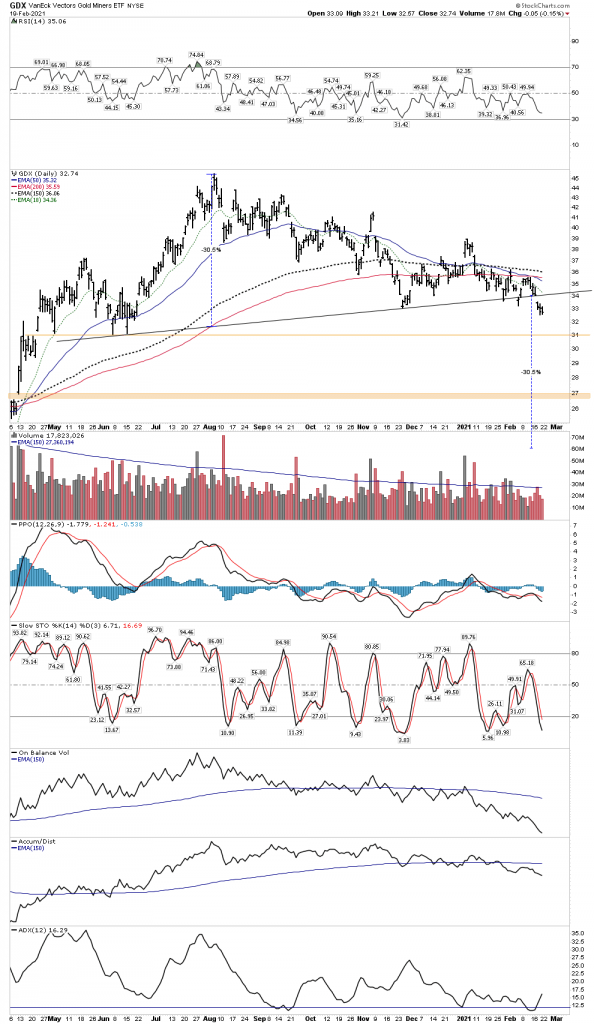 This past week was pretty brutal for the major gold miners.  Selling was relentless.  Some major issues ended the week outside their bottom bollinger bands.  This typically sets the market up for a rebound and you can see on the chart this may be in the form of a backtest rally possibly up to the NL it just broke through.  IMO this would be the place to lighten up if one accepts this investing thesis and wants to build cash.

Putting This Into a Historical Context

So how reasonable is it to suggest that the gold stocks could continue their correction for another 6 months and probe levels down to HUI 200 or so?  From a historical view I think it is very reasonable.  Below is a chart of the last bull market and its first big move off of the bottom: 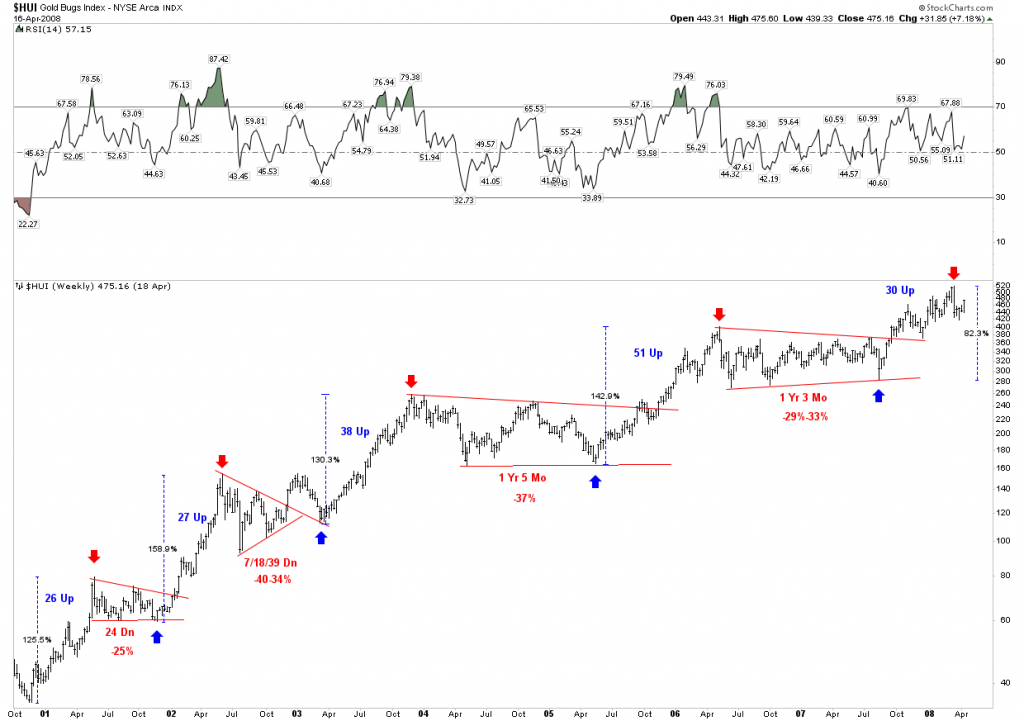 I suggest taking a look at this chart and study the number of weeks the consolidations lasted and the degree of the drawdowns.   From the beginning of this rise in late 2000 to the major peak at the end of 2003 the HUI rose 7X.  During this period gold itself went from $254 to $427, a 68% rise.

In today’s market the HUI rose almost 3X from Sept 2018 to Aug 2020.  During that time gold rose from $1118 to $2091, a 79% rise. So in this recent rally gold rose more but the HUI less.  The correction that followed the 2003 top lasted 1Yr and 5 Mo and declined 37%.  Today if the correction ended in say August at HUI 200 that would be one year and a 46% decline.  Point being it’s in the ballpark of previous consolidations (cyclical bear markets)

Silver- And Now For Something Totally Different!

To me silver is giving us a totally different story.  Most of my understanding of today’s silver market comes from my reading of Ted Butler.  For me he is the go to authority on what’s happening in the silver market.  He deals with publicly disclosed facts and forms his conclusions.  No, he is not a crazy Bix Weir silver nut.  (not saying all Bix has to say is crazy, but some…yes)

Silver is sending us totally different messages than gold.  Why is this? It is because the concentrated short position (fact) by the bullion bank cartel has over time led the industry into a shortage physical condition. As industrial consumption has risen it cannot accommodate an increase in investor demand at today’s prices.  It’s just that simple.

Ted has shown that the short interest in silver, in terms of available bullion, relative to gold is 72X.  That’s right 72X more silver short than gold.  Silver supply is drying up and one needs to only read this weeks change in the SLV prospectus to understand that this is a fact, silver is sitting on a powder keg extremely vulnerable to a massive Gamestop like short squeeze.

The reality of course is that this is so much larger than Gamestop.  So even though the gold market is a bearish case for now, the silver market could erupt upside any day… it has this potential.  Try to resolve these two polar opposite outcomes in your head.  Good luck, I am trying with little success.

Silver’s cinched-in bollinger bands are signaling a rapid movement in price dead ahead, which direction…who knows: 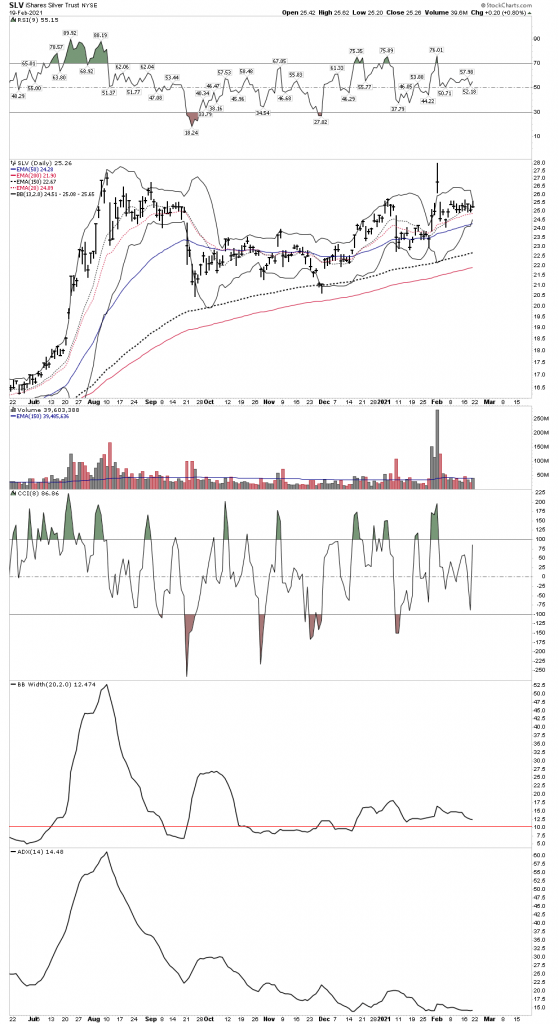 Myself, I am staying long Silver stocks but going to rein in my gold stock exposure after an expected bounce while I prepare to short a top in the general stock market.