After a great run during the tech bull market that ended in 2000 I was able to basically retire and built our dream home. After that bull market ended I was left looking for another area in which to invest. It wasn’t until early 2002 that I saw a chart for gold which was showing a very large base that caught my attention. Whenever I see a big base I have to study it more to see what is behind the price action. The more I looked, it became apparent to me, that a new bull market may be starting to form in the PM complex.

Keep in mind I knew very little about the PM complex back then as I only traded the big cap tech stocks. I only knew a few of the really big cap PM stocks like Newmont, Barrick, ASA and just a couple of others. I didn’t even know there was a sector called the juniors. It didn’t take long after I immersed myself in studying all I could about this new area to invest that I became hooked. I still remember my first trades in the PM sector which were Newmont, Barrick and ASA.

I kept studying this new and exciting area for me and found out about the juniors and the possibility they could offer. I read several articles about how many of the juniors went through the roof in 1997 I believe, when BRE-X supposedly found the Mother Lode. Juniors were going up 100’s of percent and many going up 1000’s of percent. There are few areas in the markets that a sector can go up that much so I had to study more. The more I studied this little sector the more convinced I became, that for me, this is where I wanted to trade. The rest they say is history.

I already had the foundation for identifying chart patterns so it was just a matter of finding as many juniors as I could and look at their chart patterns. Since the first leg up in the new bull market had ended there were many juniors with some decent consolidation patterns already in place. I was lucky that I was able to catch most of the 2nd leg up in the new bull market before it ran out of gas and needed to consolidate its gains. When I put my first PM portfolio together I bought 10 juniors all under a dollar and hoped for the best. By the time the correction began that portfolio was up 273% in just under 8 months which was more than I had hoped for.

During the next impulse move up that began in 2005 I had bought 20 juniors all under a $1.00 and when that impulse move ended that portfolio was up 328% in less than a year. Needless to say I had found a new home in which to trade.

What I learned trading back then was that the tide would lift all boats to a certain degree with the juniors that had good looking chart patterns 100’s of percent. What I also learned back then was that when the impulse move ended it was time to get out of those juniors as they could give back a large chunk of the profits during the next consolation phase.

So that brings us up to my current portfolio. One thing about the PM stocks is that it is a small universe and following it through the years you begin to learn about their individual characteristics and how they may behave during an impulse move. Some would call my current portfolio very speculative because I don’t have any really large PM stocks, but I do have a decent mix of some mid caps and juniors.

Sir Plunger’s 4 horsemen are going to do very well and make a lot of money for those that invest in those 4 stocks. For me personally and what I learned in the first half of this secular bull market that ended in 2011 was that the juniors is where I want to mostly trade. If I don’t make at least 250% to 300% on this trade, which I finished up the buying today, then I will be disappointed. I hope it will be more but I’ll be satisfied with the 250% to 300% profits.

Another important lesson I would like to make is that once you are in a confirmed impulse move the last thing you want to do is try trading it. That was a lesson I learned the hard way though the years. For whatever reasons once you get out of a trade in an impulse move the idea that you are going to buy back at a cheaper price very seldom works out. My experience has been you usually pay up if you want to get that position back.

I posted this history chart for the HUI several weeks ago which shows all the consolidation patterns that formed during the first half of the secular bull market that ended in 2011. The red arrows show you where the impulse move actually began. As you can see most of the impulse moves between each consolidation pattern lasted for many months before they became exhausted. If you recall the last time I posted this chart I put the red arrow under the 5th reversal point on the 2016 triangle reversal pattern. I said I wasn’t going to wait for the breakout before I got positioned which so far has worked out well. The price objective for the 2016 triangle is above the 2011 all time high over 700 but I’ll be satisfied to reach  the all time high before the next consolidation period begins. 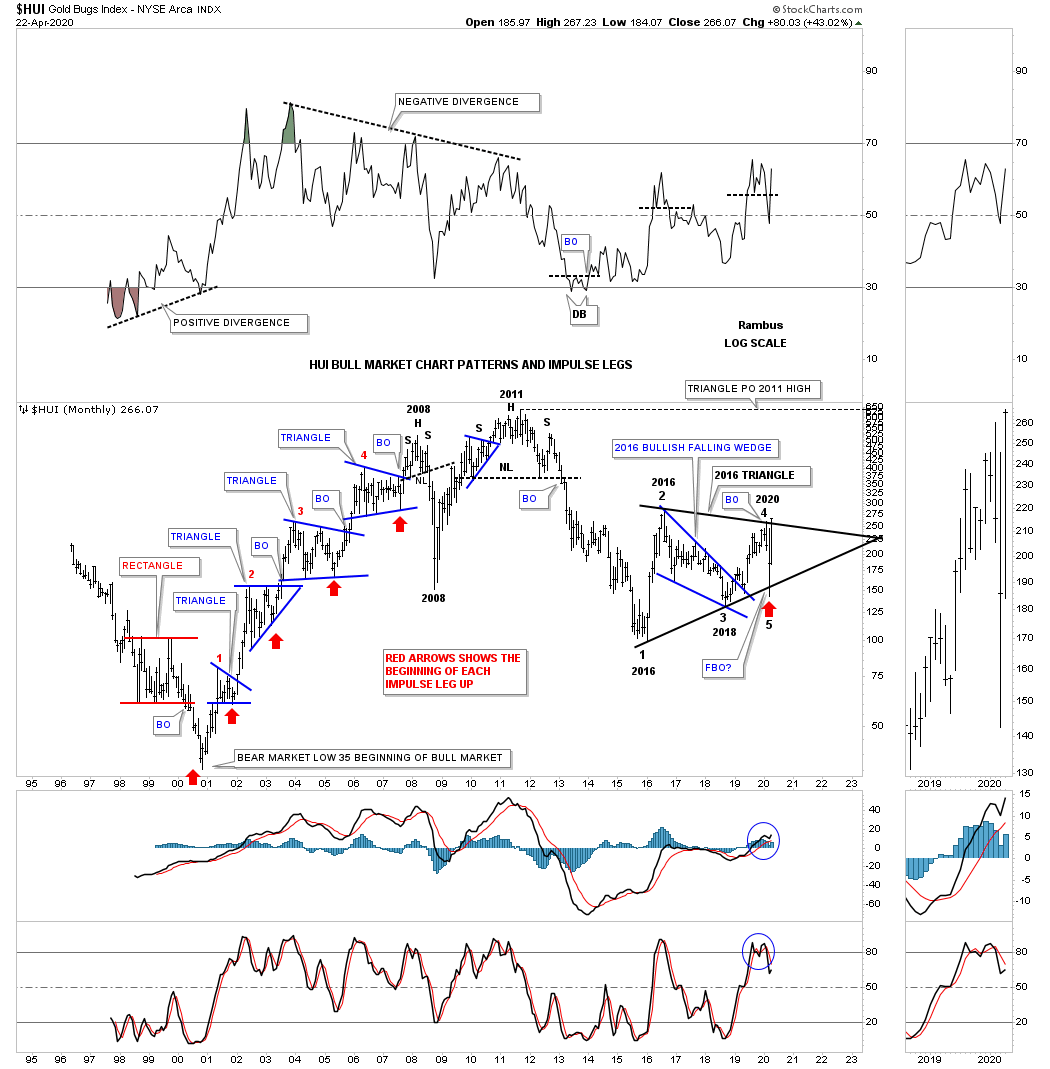 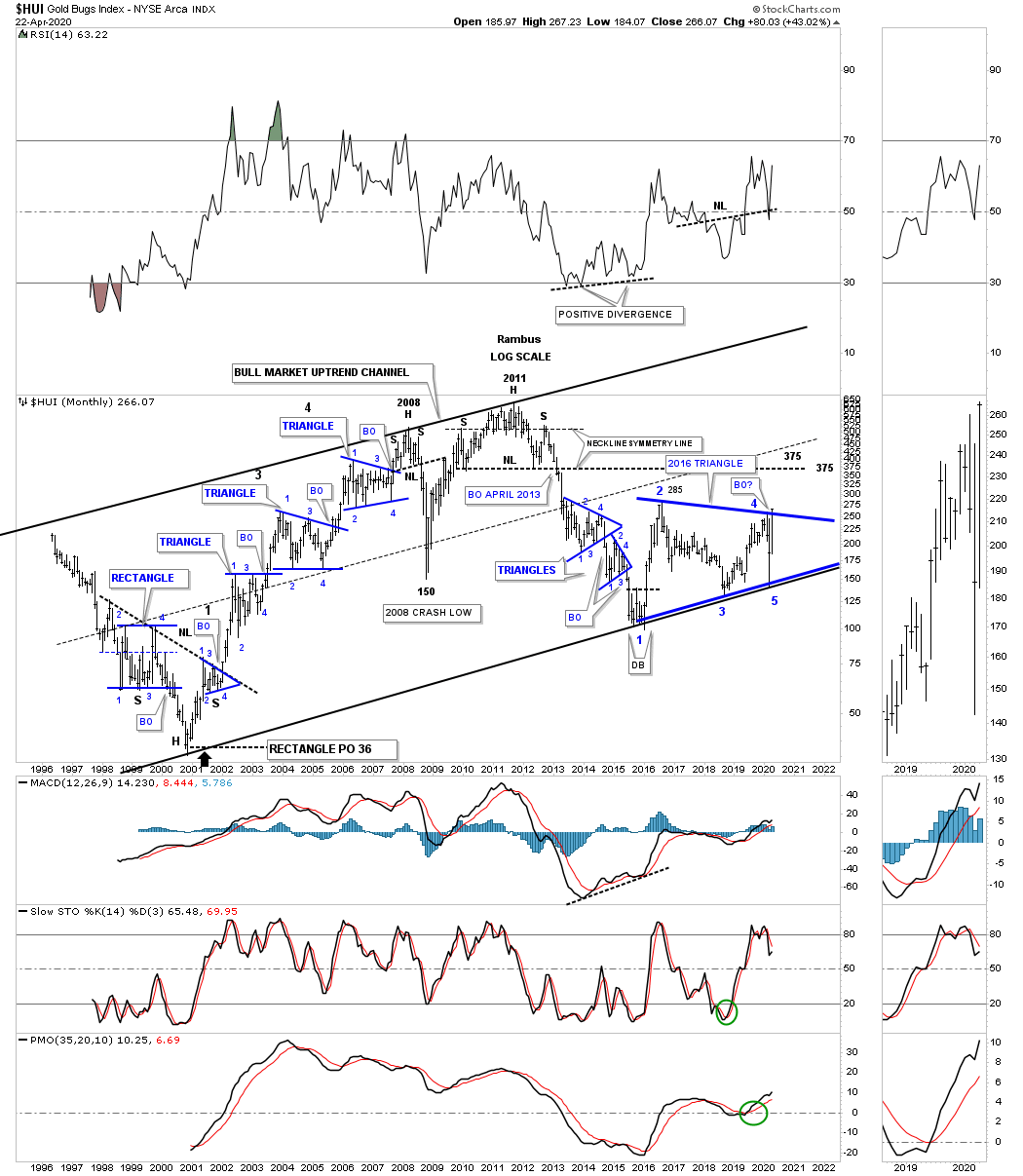 Below are 3 separate tables that compile a list of all the PM stock trades we made starting on April 2nd 2020 until I closed out the account. I didn’t make my 250% that I was originally was hoping but we did make a little less than 100% and I was able to take a  profit of $97,315 out of the market. As I stated earlier totally out of the market. Think of those 67 trades as one big trade. I know have starting capital of $100,000 when I begin to invest in the PM complex again whenever that time comes.

I mentioned earlier that this past year has been a bonus for us as we had two great intermediate term trends to trade. As you know I began building out the Leveraged Trade Portfolio back in the fall of 2020 and just recently closed it out for a decent profit of $95,504.34 with a total of 25 trades. Again, this profit has come out of the market and you can think of those 25 trades as one big trade. I’ve already started to use the new starting capital of $100,000 to begin building out my next Leveraged Trade Portfolio which is about 10 trades so far or about $50,000.

Back on June 22nd of last year I wrote this little piece as the start of the “Market Update” I do each day to get this out in the open in case what I was seeing as a huge potential would actually come to pass.

Before we look at today’s charts I would like to give you a short answer on why I’m taking on so many positions in the stock markets. The short answer for now is that I recently had an epiphany moment similar to the one I had on the US dollar back in 2014 when I discovered that massive 11 year base that was a fractal to the one that formed previously that most of you have seen many times.

Currently I’m seeing some patterns setting up in the stock markets that could lead to a very powerful rally the likes of what we’ve never seen before. I realize that many think I’m living in fantasyland by being bullish on the stock markets which is fine because I don’t want to run with the herd. I want to go where no man has gone before. That sounds like a movie title.

The bottom line is that I need to see a little more price action which could happen fairly quickly over the next couple of weeks to come forward with what I think could happen. The kicker is that the PM stocks will go along for the ride. I’m posting this today so I’ll be on record if indeed what I’m seeing plays out. It will mean nothing after the fact.

This is a weekly chart for the SPX where the red arrow points to the week of June 22nd 2020 when I made that little post above. Note how many times that top rail of the 2018 bullish expanding triangle has been hit from above. Even with a tough couple of weeks the SPX closed at a new all time high last week. 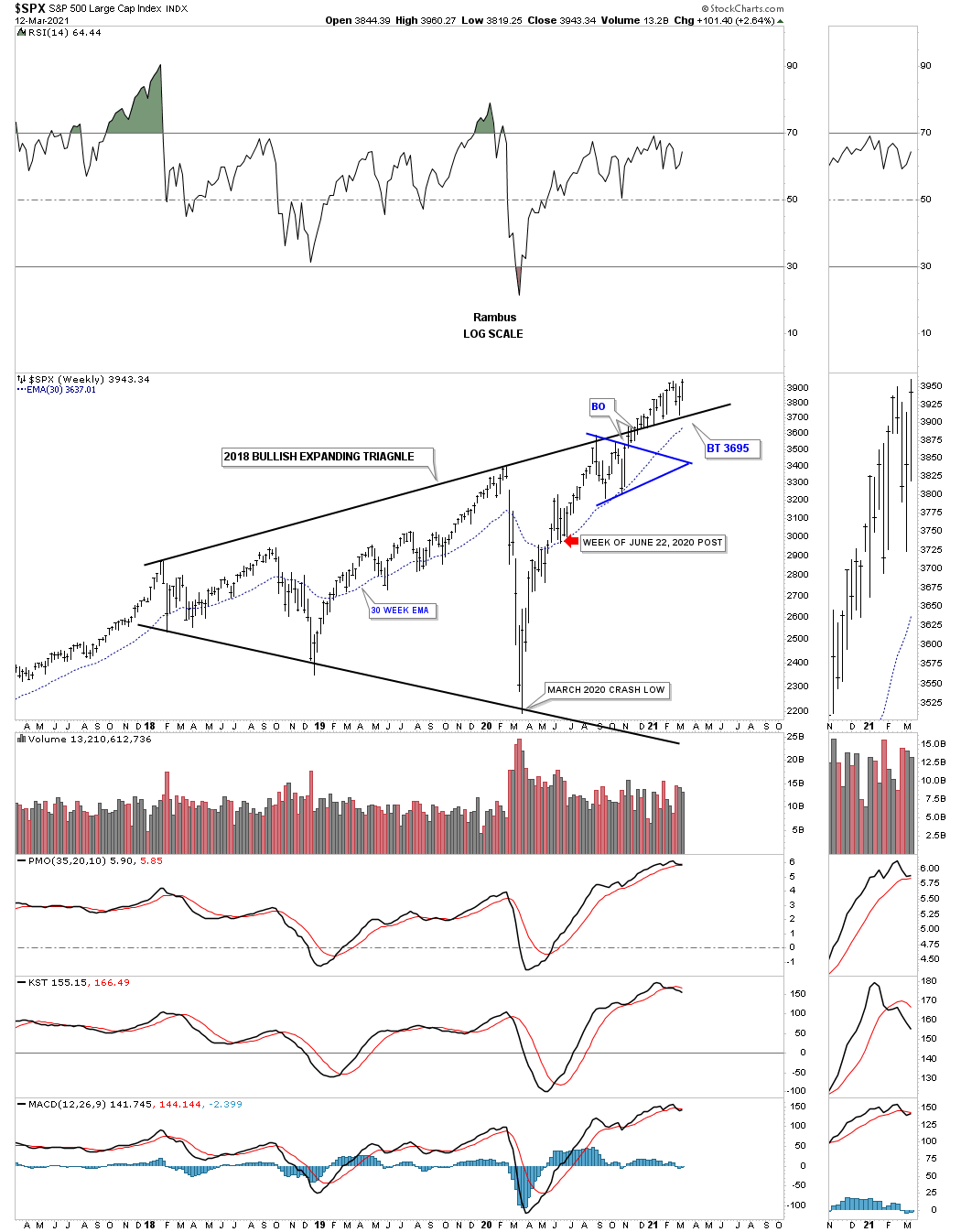 I’ve finally got all the trades in the, Leveraged Trade Portfolio updated so you can see how they did. We had a total of 25 trades with a net profit of $95,504.34 not quite a double.

While the PM complex began their correction in August of last year the Leveraged Trade Portfolio kicked in to pick up the slack and gave us many more months of positive trading by keeping an open mind and not being tied down to just one sector. I’ve always said that I don’t care what sector I trade as long as there is a decent impulse move to be traded either up or down. For me this begins a new year of trading the markets. I will be satisfied if what I trade this year matches last year results but as always I hope I can do better. This is one of the toughest games on the planet to be successful which is why I love the challenge. Hoping for a better year. All the best…Rambus