In this weekend report I want to show you the chartology of gold focusing in on the last year of trading that takes in the all time high made last year about this time at 1920. After the all time high was made it only took alittle over a month for gold to correct almost 400 points down to the 1535 area. That correction was about as violent as they come. Alot of times when you see a panic decline like that it can mark the low for the consolidation area that tends to form if the bull market is still intact. On the chart below you can see that is exactly what happened. That panic low has held for close to a year now with two more touches, one in December of 2011 and one last touch in May of this year points three and five. 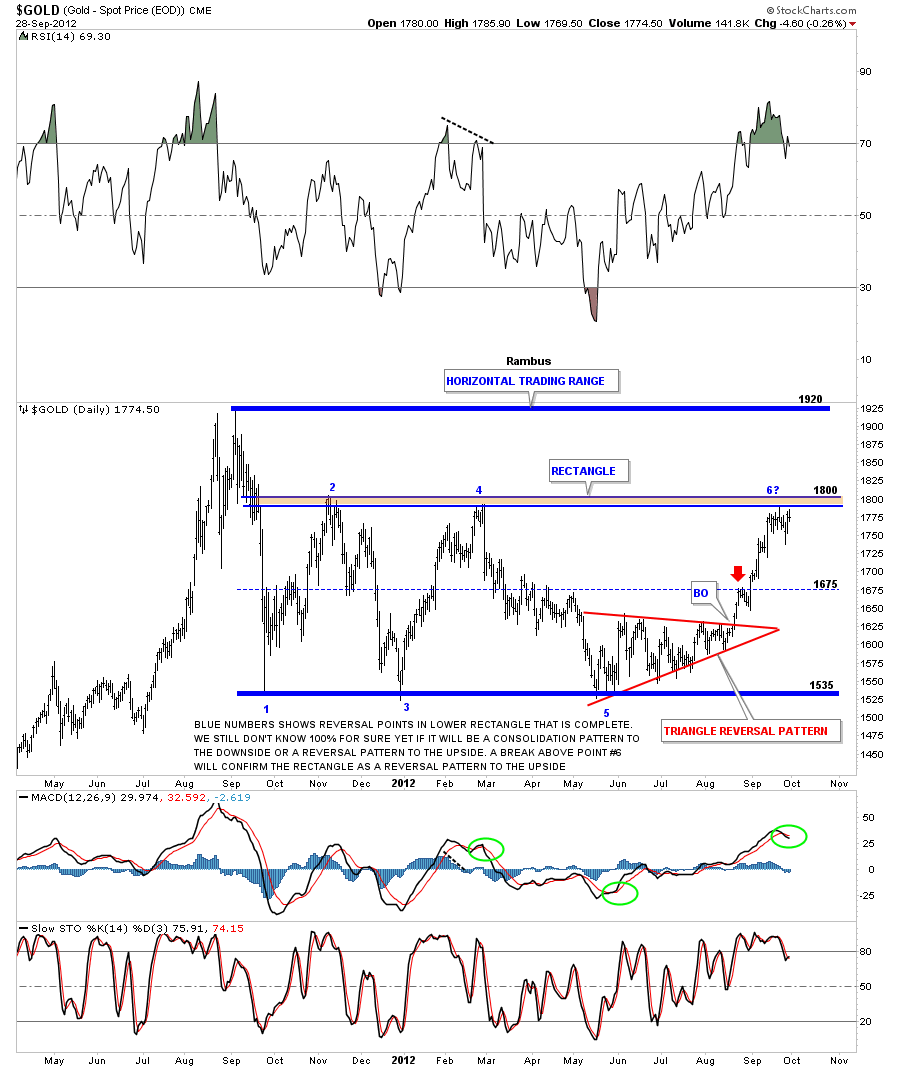 On the chart above you can see the big horizontal trading range that gold has produce since it’s bull market high at 1920. There are several  possible chart patterns that could play out as this one year consolidation area matures. On the lower 2/3’s of the chart I have marked the number of reversal points on the rectangle from one to 6?. That rectangle is a completed pattern and gold is now trading at the top rail at roughly 1800, point 6? This is the most important area for gold right now as it has completed the 5th reversal point that puts this consolidation area in the reversal pattern category. Because the rectangle has formed below the all time high we have to see some type of reversal pattern to reverse the trend from down to up. The odd numbered 5 point rectangle fits the bill. Gold has to take out the 1800 top rail to confirm the rectangle as a reversal pattern. Until that happens gold is still working within the confines of the big rectangle. 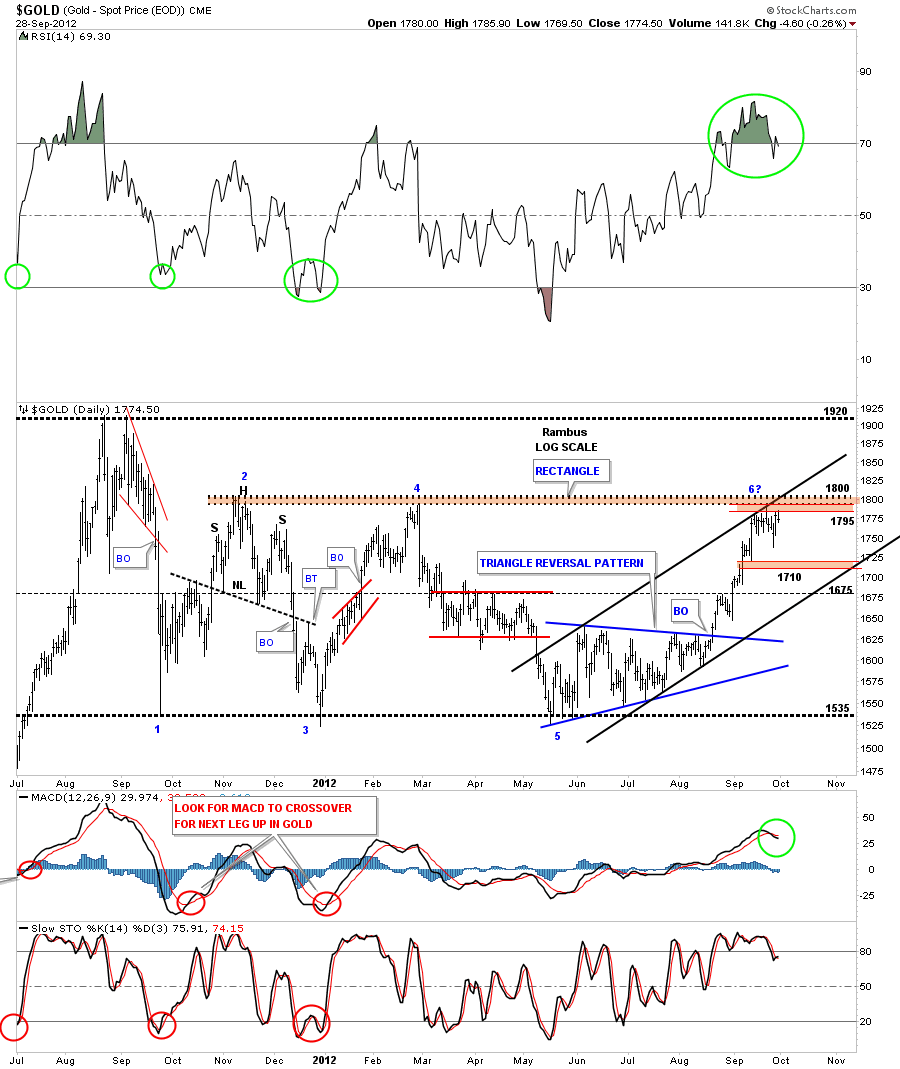 Lets now look at the last nine months of price action within the big rectangle that shows the previous leg down and our current leg up. The last decline took on the formation of a bullish falling wedge with a red rectangle that formed as a halfway pattern to the downside. From that low at 1535 gold then went on to form that all important 5 point blue triangle reversal pattern to the upside. As you can see on the chart below the last rally was very strong when it reached the top of the rectangle at 1800 or so. That put the RSI indicator, at the top of the chart, in overbought territory. What I would like to see and would be good for gold is to work off some of the overbought condition by trading sideways just below the the all important 1800 area. Its still way too early to know if this is what will happen but I’ve marked a possible trading range, red horizontal trendlines, that could allow gold to chop around for another month and work off some of the overbought condition that would be very healthy and not hurt the overall bullish look of the chart. 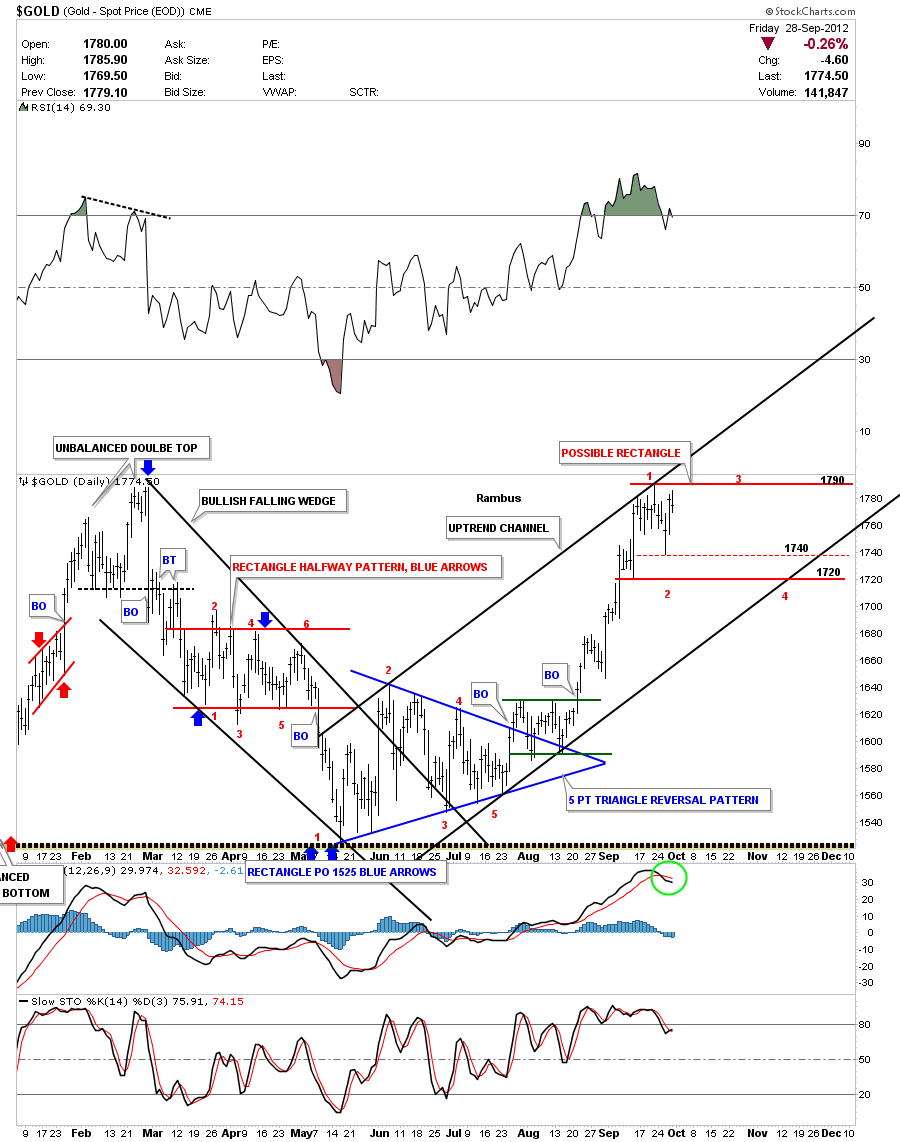 What I’ve shown you so far had been the horizontal trading range gold has been in since the 1920 high made last year. There is another possible important chart pattern that is in play also and that is the big black triangle consolidation pattern on the chart below. The red circle shows the breakout and backtest to the top rail of the triangle and the 300 dma which was most important. As you can see the most recent price action is now trading just below the all important 1800 area that is the top rail of the rectangle that I showed you on the charts above. So, anyway you look at it 1800 is still the most important number to keep your eyes on. 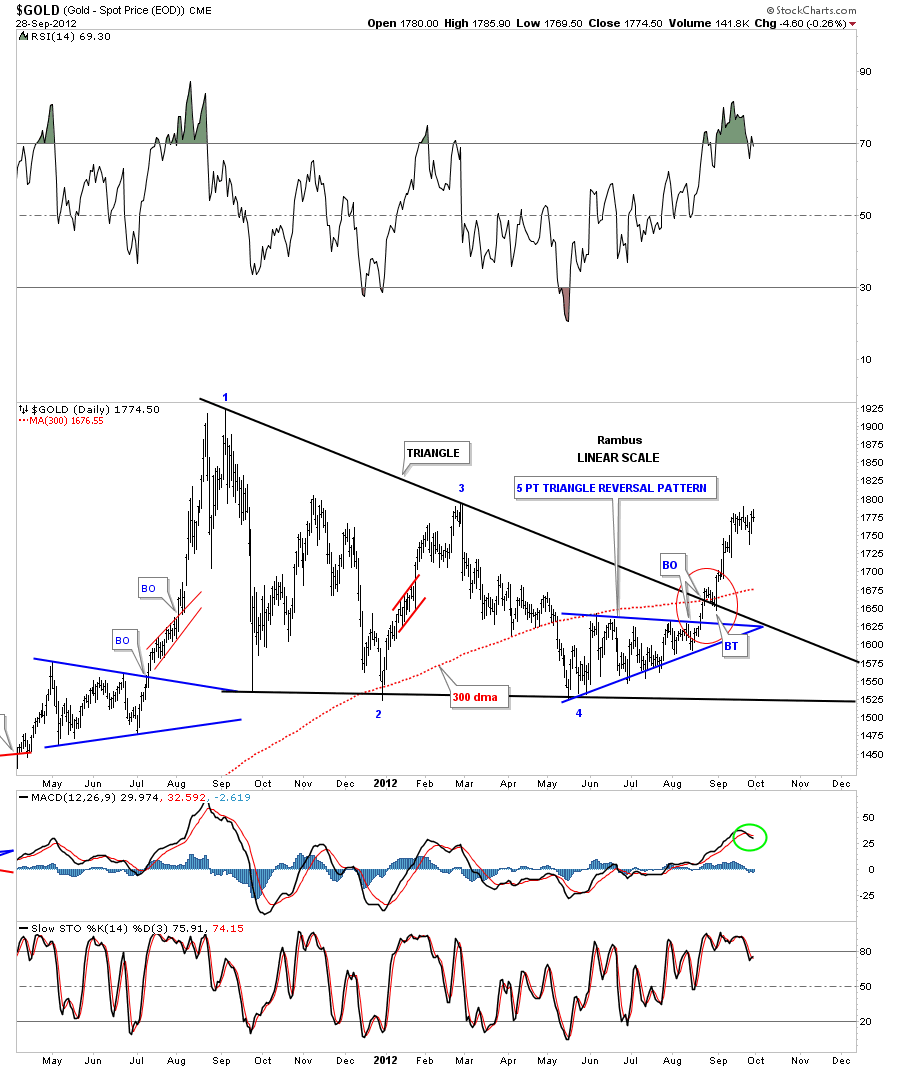 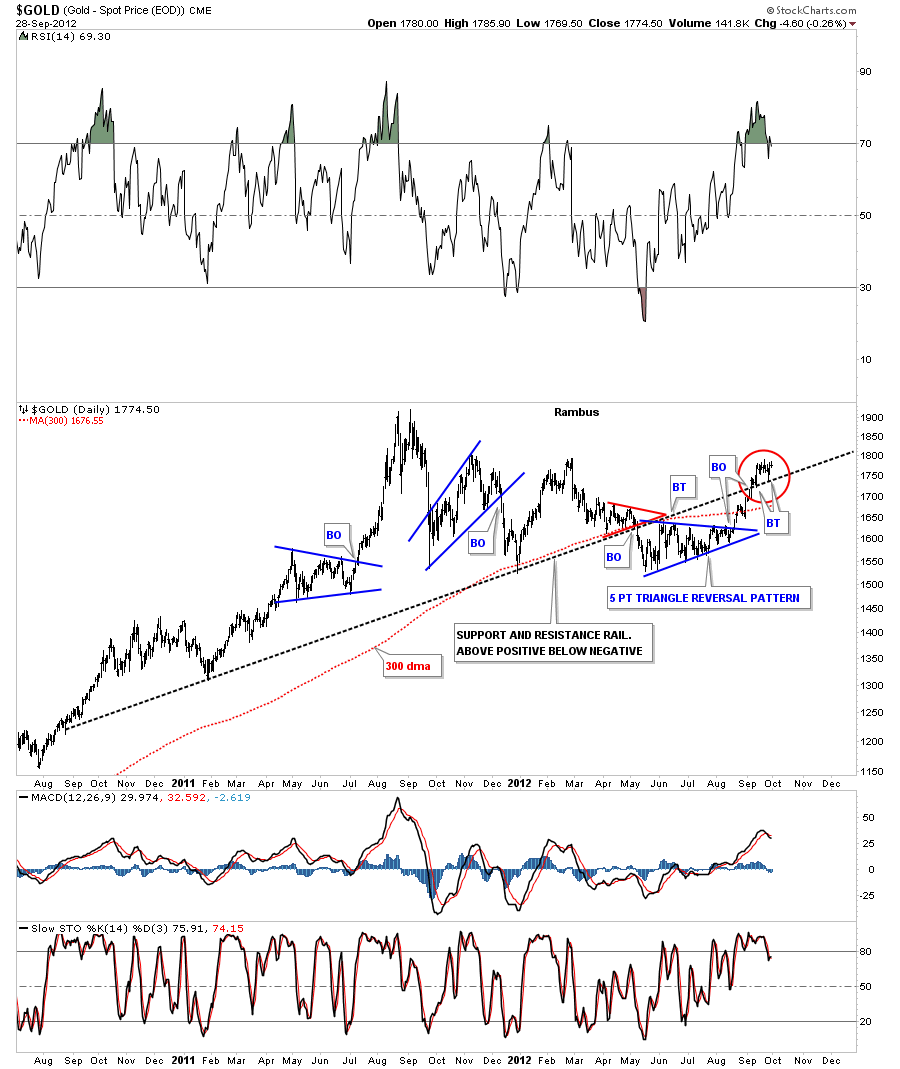 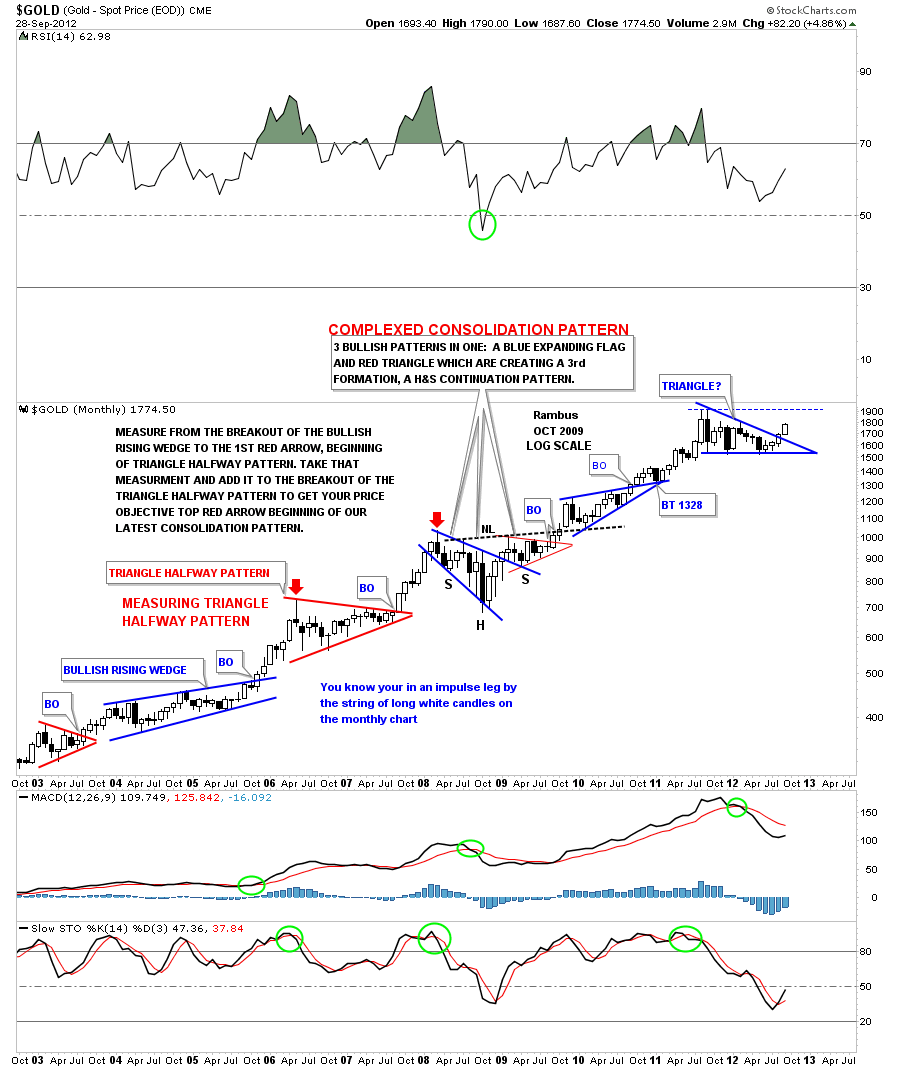 Gold has had a strong rally after breaking out from the 5 point triangle reversal pattern back in late August. The price has now risen to the top of the horizontal resistance rail, of the rectangle, at 1800. When you see 1800 taken out to the upside you will know gold is strong and the next point of resistance will be the all time high at 1920. Gold could very easily chop around for several weeks to a month before the actual breakout occurs to relive some of the overbought condition. That would not hurt the overall bullish situation gold is now in. All the best…Rambus

………………..
EDITOR’S NOTE :
Rambus Chartology is Primarily a Goldbug TA Site where you can watch Rambus follow the markets on a daily basis and learn a great deal of Hands on Chartology from Rambus Tutorials and Question and Answeres .
Most Members are Staunch Goldbugs who have seen Rambus in action from the 2007 to 2008 period at www.goldtent.org and now Here at Rambus Chartology since early 2012 .
To review his Work and incredible calls from the 2007-2008 period click on the top right sidebar in the “Wizard of Rambus” ….”What If !!” Post
To Follow Rambus Unique Unbiased Chart Work and participate in a Chartology Form with questions and answeres and learn the Art and Science and Mindset of a Pro Trader please Join us by subscribing monthly for $29.99 at
www.rambus1.com
We have many subscribers from all over the world who are glad they did as they enjoy the many daily updates and commentaries provided at this exciting new site
As you will see Rambus (Dave) has prepared us for this difficult period by being one of the only ones to see and warn about this incredibly debilitating PM smackdown as early as Jan 2 2012 …click on the” HUI Diamond in the Rough” Post in the “Wizard of Rambus” top right
More Recently Rambus called a Bottom in HUI in this post…and has subscribers on board for a Powerful Run to the Upside
http://rambus1.com/?p=5651
What is he seeing Now ?
You will find Rambus to be a calm humble down home country tutor with an incredible repitoir of all the TA based protocols tempered with his own one of a kind style…simply put…He wants to keep his subscribers on the right side of these crazy volitile and downright dangerous markets
See you at the Rambus Chartology
…………………….