The first thing I would like to discuss tonight is getting stopped out of our DSLV trade today. I believe it was by about .13 cents. There comes a point when one has to draw a line in the sand no matter how right we may think we are. Its all about preserving capital for the next trade that is most important.

Today was like a double edged sword where we got stopped out of our DSLV trade and on the other hand we got alittle more clarity on the precious metals stocks. How one deals with a trade like DSLV, being so close to working but failing at the last moment, can emotionally get in the way of sound reasoning going forward.

A big mistake alot of investors make is they know they are  right and the market is wrong so they hold on to their losing positions waiting for the market to come around to their point of view. Many times the market never comes around to what one was originally thinking. Think tech bubble in 2000 or the gold price in 1980. Things change all the time and if you don’t change when the markets change you get left holding the bag with nothing in it. Believe me, the markets don’t care one bit about your point of view. The markets are always right no matter what you may think.

When you look at the ratio charts below keep in mind they are relative. For instance when the bull market started in the precious metals complex back in 2001 the HUI was trading at 35 and gold was at 255 that gave a reading of .13 or so. There can be a higher price for the HUI and gold where you can still get a ratio of .13 which is where I think we are headed in the future. The ratio chart does do a good job of telling you which item is outperforming the other one.

Next, the precious metals stocks march to their own drummer and seem to do whatever the hell they like. The first ratio chart below shows you that the HUI to gold ratio is beginning to breakdown again after consolidating for eight months or so. If this expanding red bear flag plays out it will put this ratio all the way down to the very beginnings of the bull market that started all the way back in 2001. It will have made a complete round trip to 13 which is the price objective of the red expanding red bear flag. Please note the purple vertical dashed line that shows you where the precious metals stocks stopped outperforming gold in the overall big picture. As you can see it was at the very end of 2003. Yes the PM stocks did outperform gold right after the 2008 crash but as you can see they soon topped out with the formation of the 7 point red diamond reversal pattern. Note the price of gold when the ratio topped out in 2003. Its hard to believe but gold was trading around the 400 mark. This combo chart shows you why the precious metals stocks investors are so wore out. Always hoping but never getting what they want. I do think if this ratio chart does hit 13 sometime in the future that would represent a very good investment if one has the cash to buy the bargains. 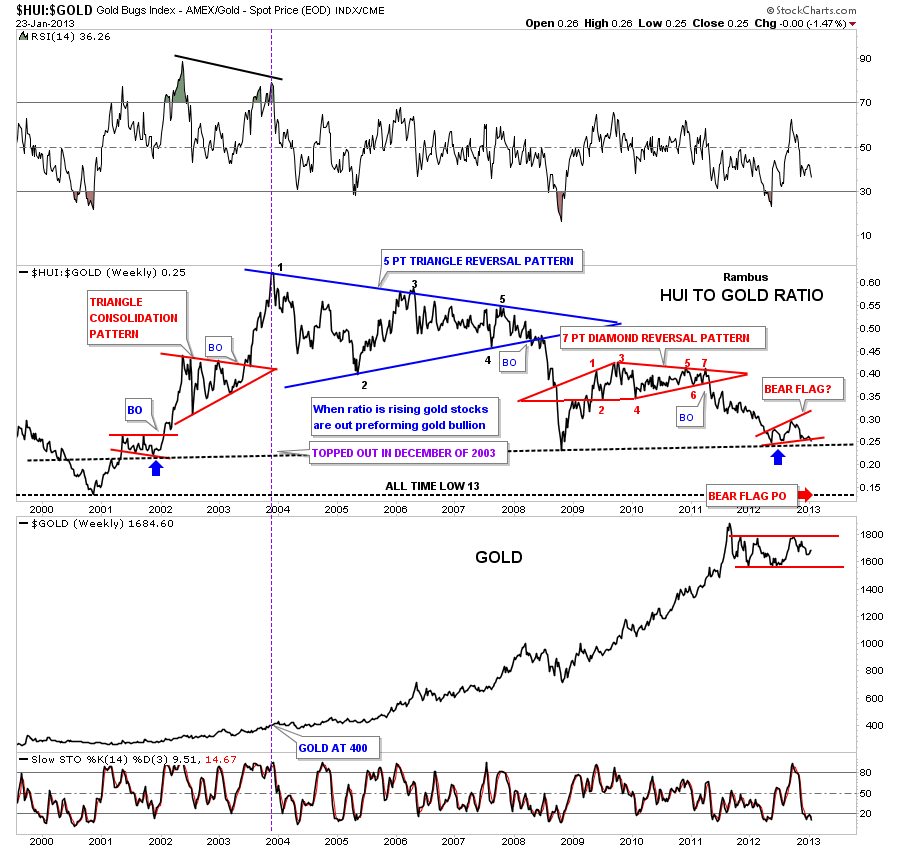 When we compare the HUI to silver we see a similar setup. This ratio also topped out at the end of 2003 with silver trading at $6.00, purple dashed vertical line. How obscene is that? Now I want to focus your attention to the right side of the chart to the HUI to Silver ratio where you can see a H&S consolidation pattern that has formed. The black dashed support and resistance rail, once it was broken to the downside, reversed its role and held resistance that created the head portion of the H&S pattern. If you look close you can see it has been backtesting the neckline and is now ready to start the move lower IMHO. 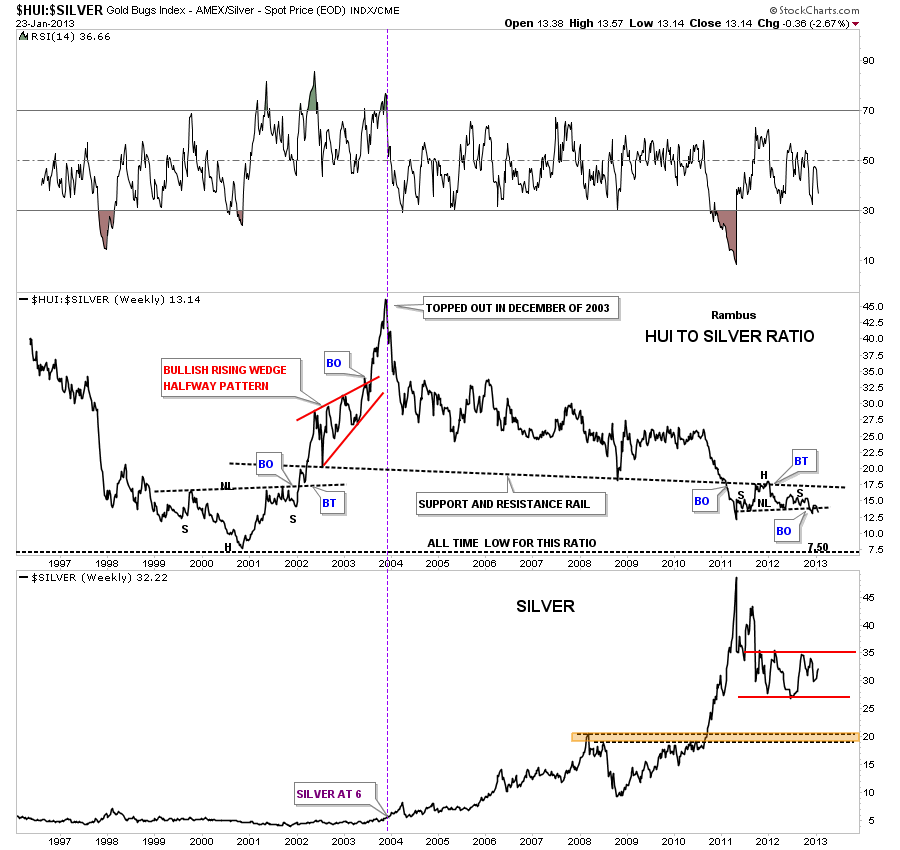 In the Weekend Report I showed you how this potential rectangle, in gold, may form in here. Gold that has been beating it’s head up against the top red rail of the possible red rectangle consolidation pattern for 5 days now. I think there is a good chance that we may see several more reversal points as shown by the black arrows within the downtrend channel. From a symmetry perspective it seems to fit. Keep in mind as these horizontal trading ranges mature it usually takes longer for the price action to go from the top rail to bottom rail and vise versa. The rectangle won’t be complete until the price action touches the bottom red rail. At that point gold will have it’s fourth reversal point completed. 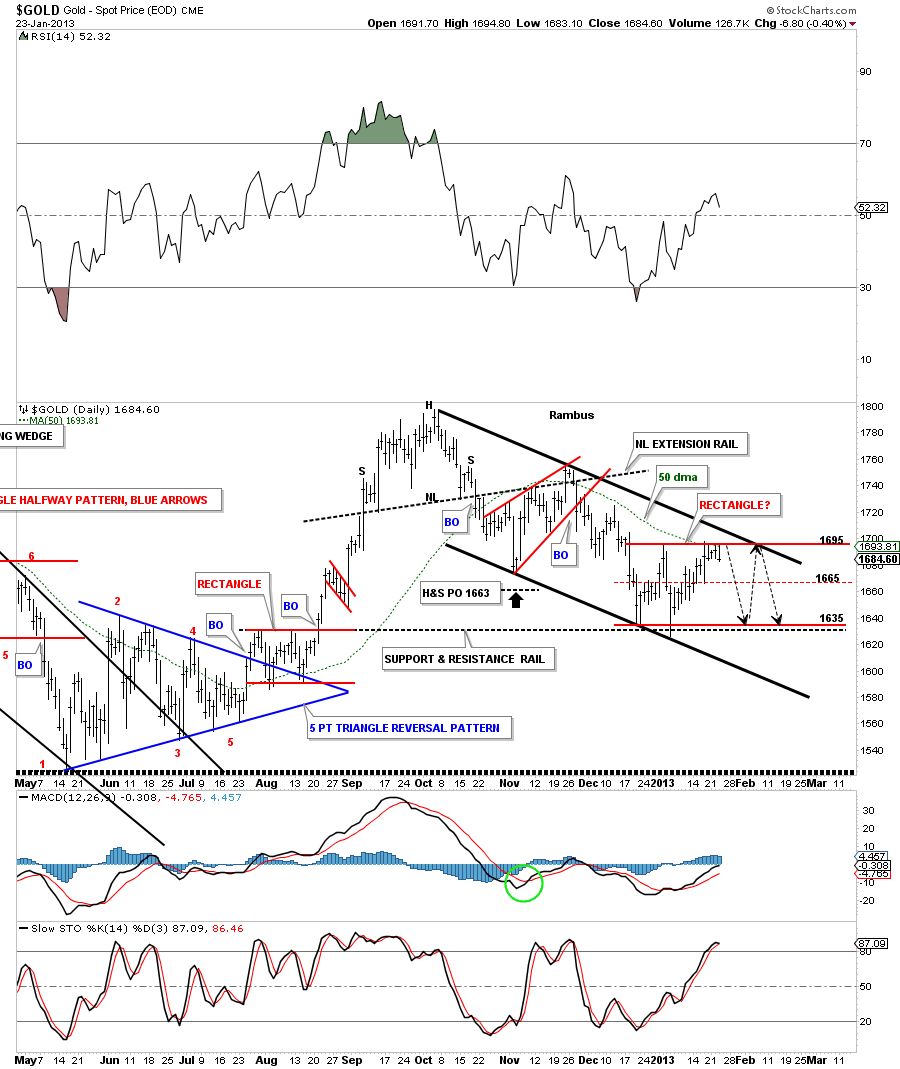 One last chart that I use to compare the HUI to the SPX. Its a combo chart with the HUI on top and the SPX on the bottom. It shows that sometimes they trade together and sometimes they are inverse to each other. Lets focus on the right side of the chart starting with the green shaded area that shows both the HUI and the SPX falling together. Then in November of last year they decoupled and the SPX has been in rally mode while the HUI has been declining, blue shaded area. How long this inverse relationship will last is anyone’s guess but until it changes this is the reality of the situation. 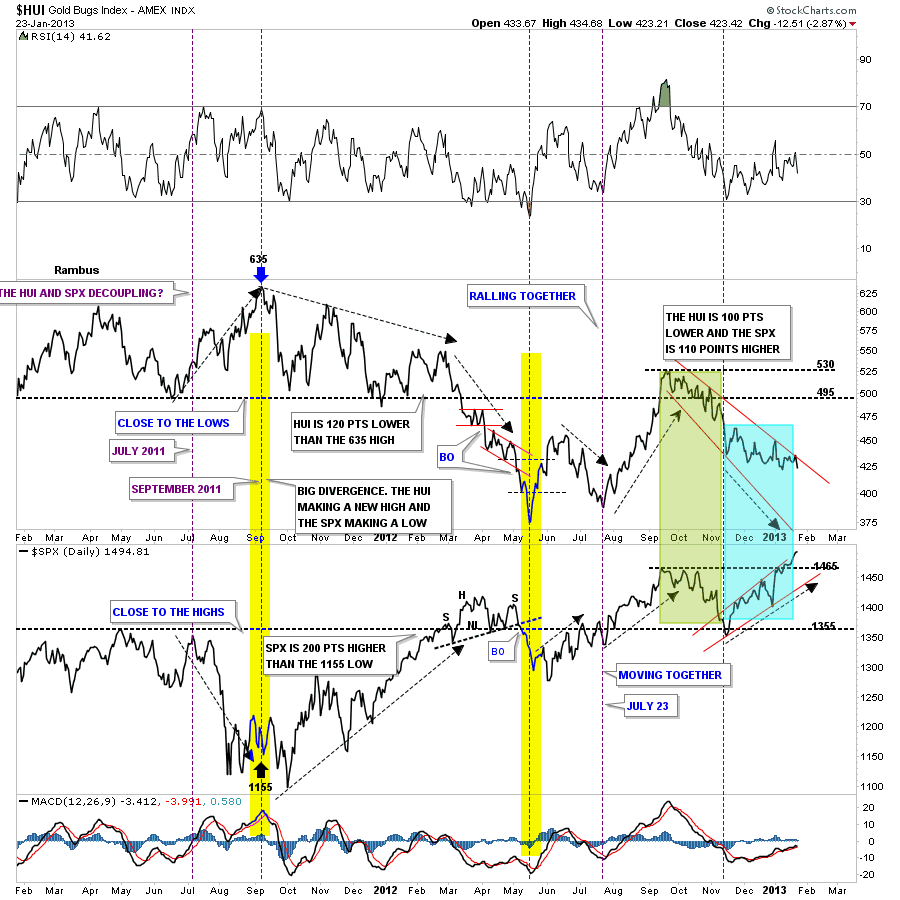 I hope this Wednesday Report helps put into perspective for you what is really happening right now. I know how over sold everything is related to the precious metals stock. All the indicators, you name it there all oversold, but they are just indicators, its the price action that you have to follow above and beyond everything else. Keep an open mind. All the best…Rambus