My job is to give you the best unbiased opinion of the markets to the best of my ability. That means my opinion is my opinion and not someone else’s. Opinions are a dime a dozen when it comes to the markets including mine. There are some good analysts and some not so good market analyst which can become very confusing when one tries to read every stock market timer on the planet.

Most investor will gravitate to someone that says what they want to hear to reenforce what they think the markets should be doing. Keeping an open mind can be very hard when so much information is bombarding us each and everyday of our life especially in this day and age. Information overload can cause mental paralysis which can lead to unwanted mistakes.

The most important thing to have when trading the markets, which is the toughest game on the planet to win, is to have a game plan and the discipline to execute it. It all sounds so easy on paper, but in reality it is much harder to do because we are human beings who have survived by following the herd.

The markets are like a casino in Las Vegas, sometimes you win and sometimes you lose, but in the end they will end up with most of your money. In the markets you may get some good trades off, but eventually you will give your profits back and then some until you realize this game we choose to play is much harder than we thought. I’ve said this many times in the past, “we are going up against the greatest traders and trading systems in the world that want every penny you have and won’t feel bad if it is your “LAST PENNY.”

I’m going to focus exclusively on the PM complex tonight and lay out the groundwork for what is possible if one can keep an open mind. There are never any 100% guarantees when it comes to the markets, but if we can get the odds in our favor we have a fighting chance to be successful. When looking at the charts below please keep an open mind.

Many of the charts you will see were down loaded last Thursday which was the end of the month and end of the quarter with a few downloaded this weekend. Lets start with the long term monthly chart for Gold which shows the possible double H&S bottom with the right shoulder still under construction. If you look at the thumbnail on the right sidebar you will see that Gold closed the month of June just below the 20 month ema for the first time since neckline1 gave way. It was only by a small margin which doesn’t look that significant, but it was the first time in a couple of years. 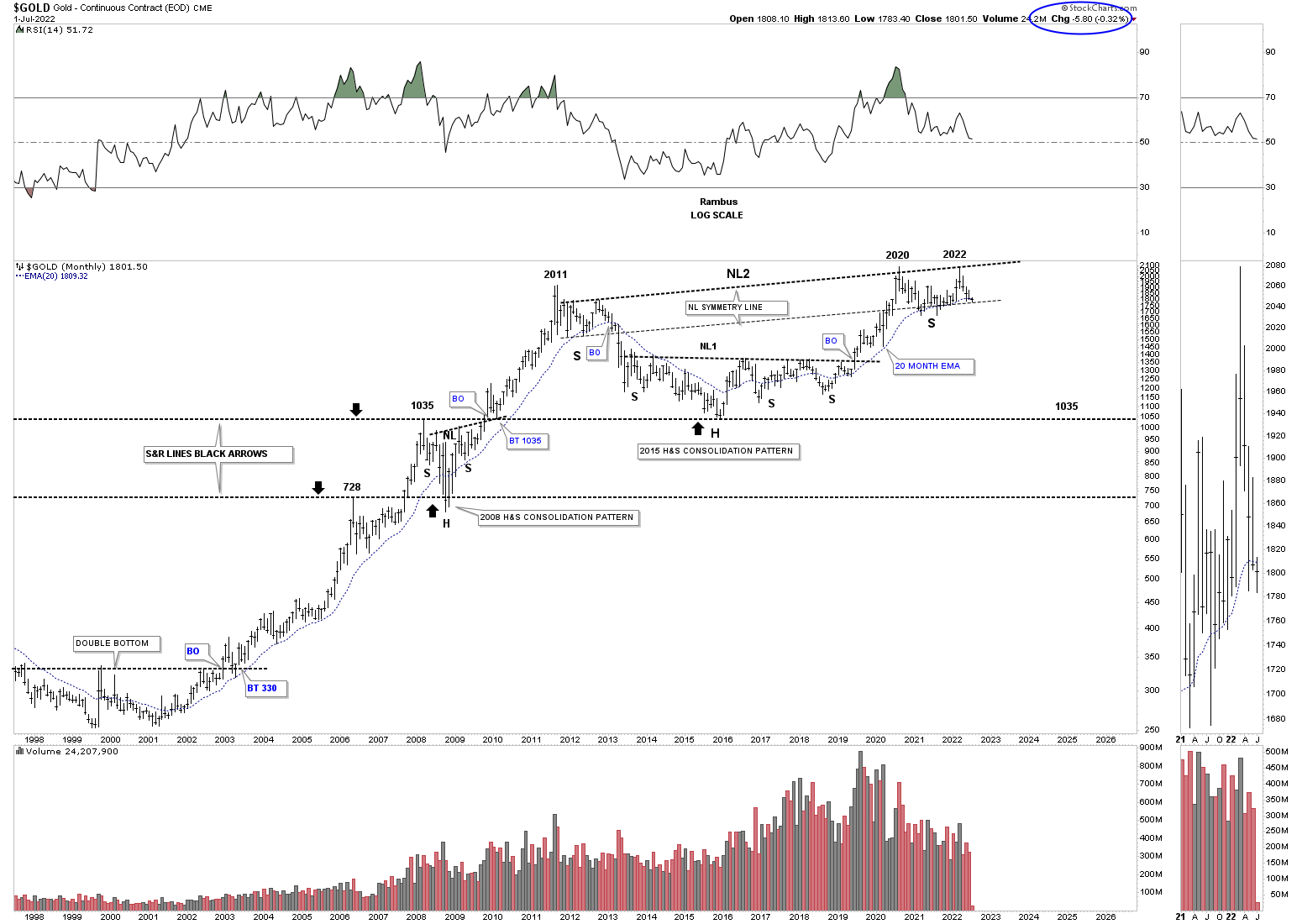 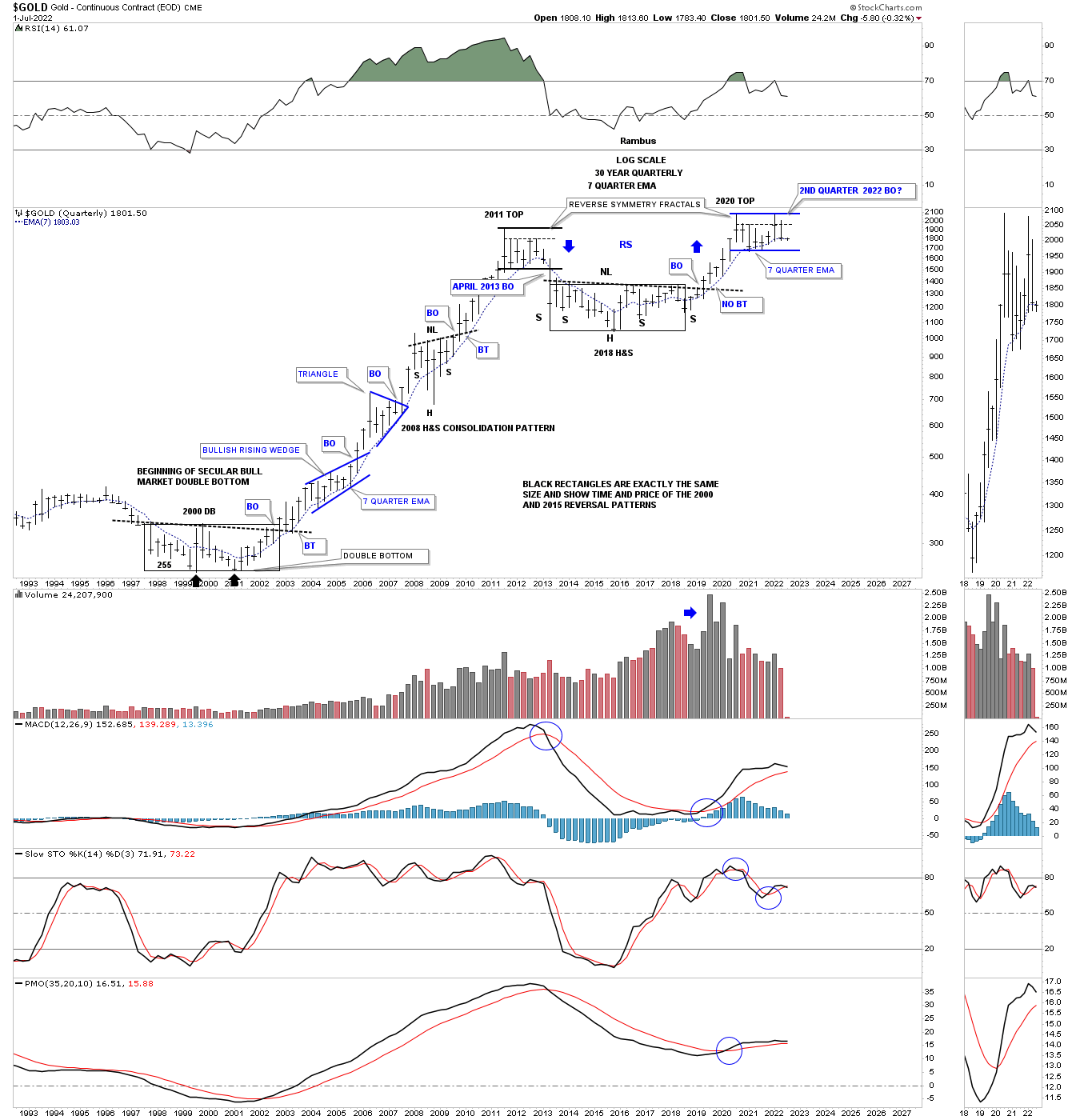 Keeping an open mind this weekly chart shows how Gold could still be in a bull market, but could have one more leg down to the bottom rail of a very large rising wedge formation that began forming at the 2011 high. Currently Gold is in no mans land offering no low risk entry point from this long term perspective. 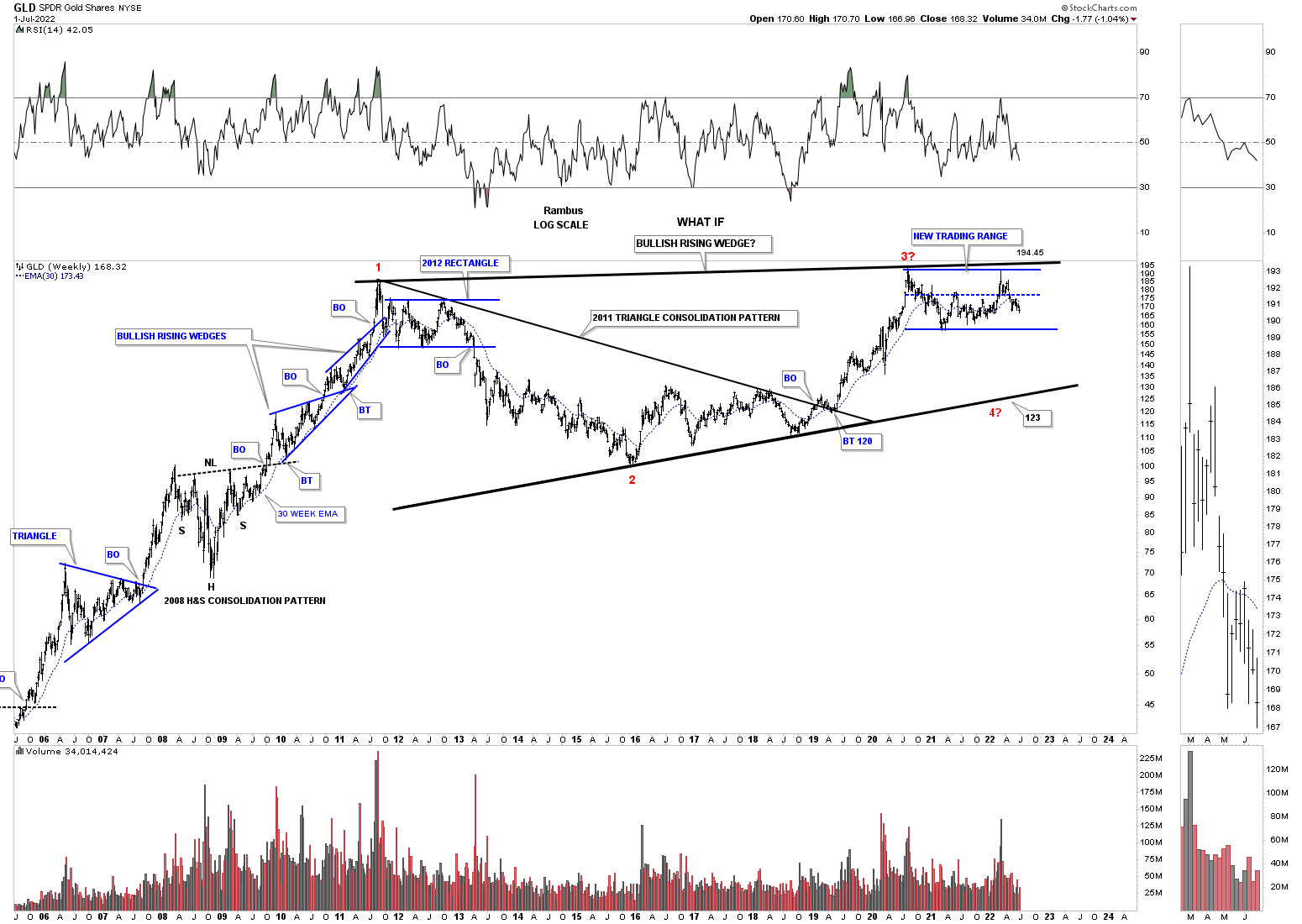 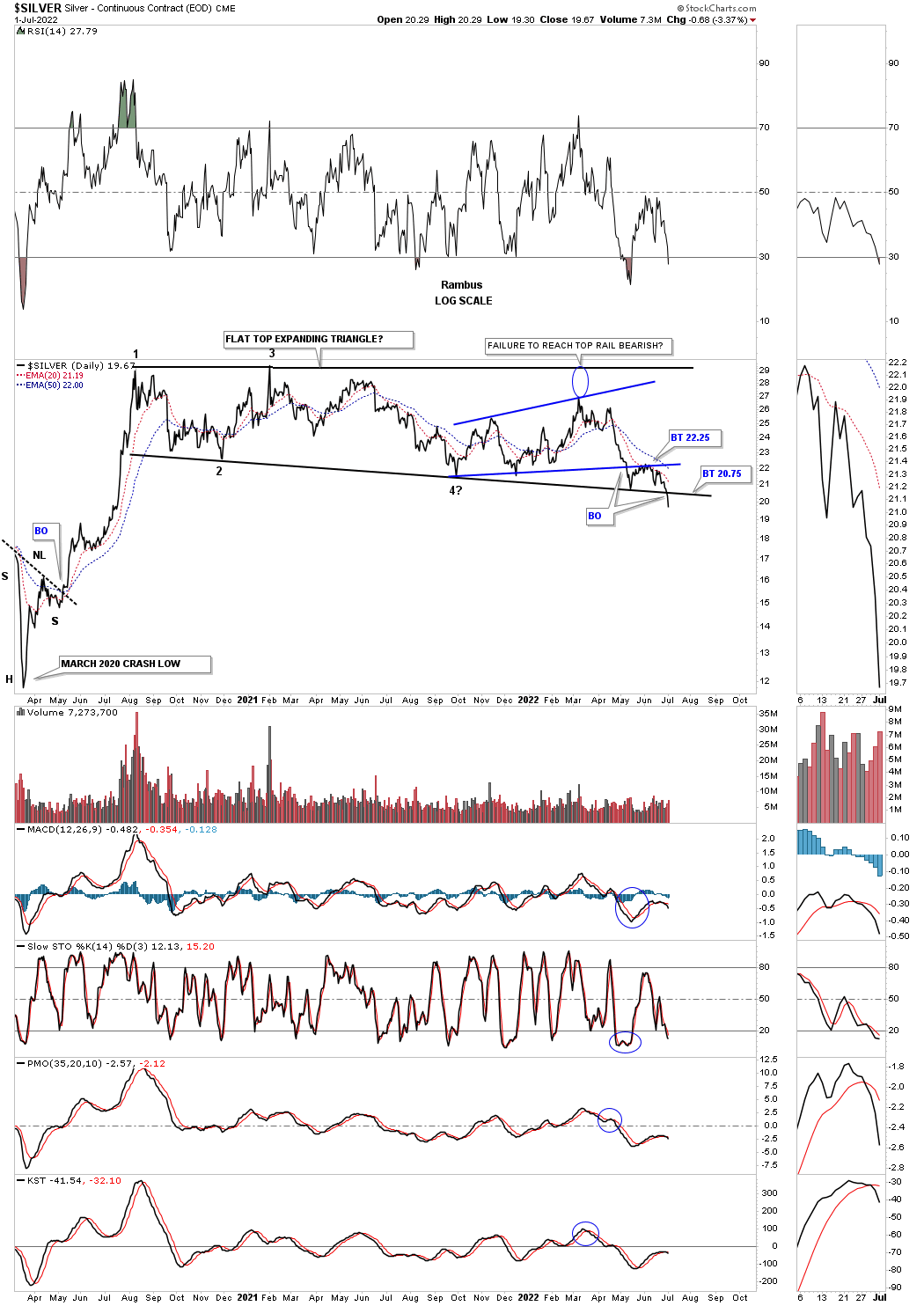 This next chart is an old chart I used during the bull market years charting the bull market in Silver. It is hard to see now but during each impulse move the price action would form a small red bullish rising wedge between each consolidation pattern.

Now look at the top rail of the 2011 falling wedge and how nicely the 2020 trading range, on the daily chart above, interacts with it. As you can see there is no gap at the 5th reversal point as the angle of the top rail takes care of it now. You can see last weeks bar traded the entire week below the bottom rail. Again, we should expect to see a backtest. 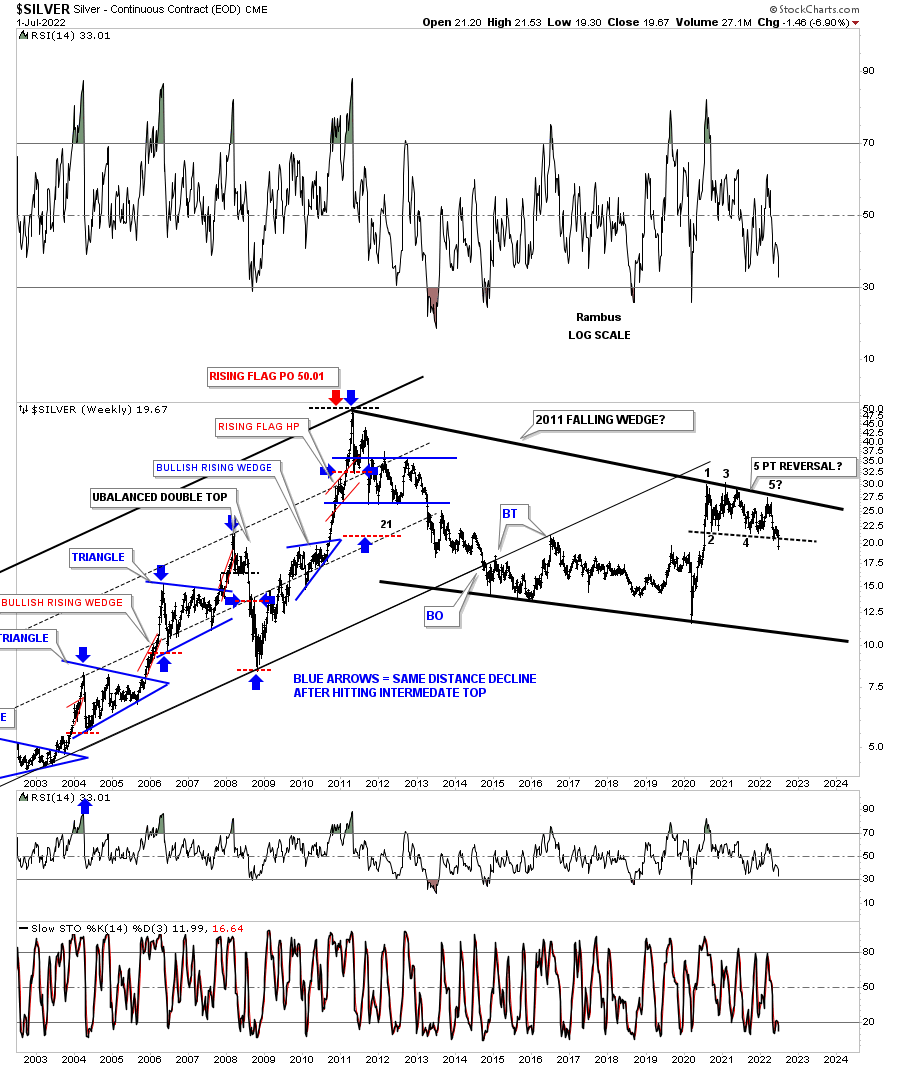 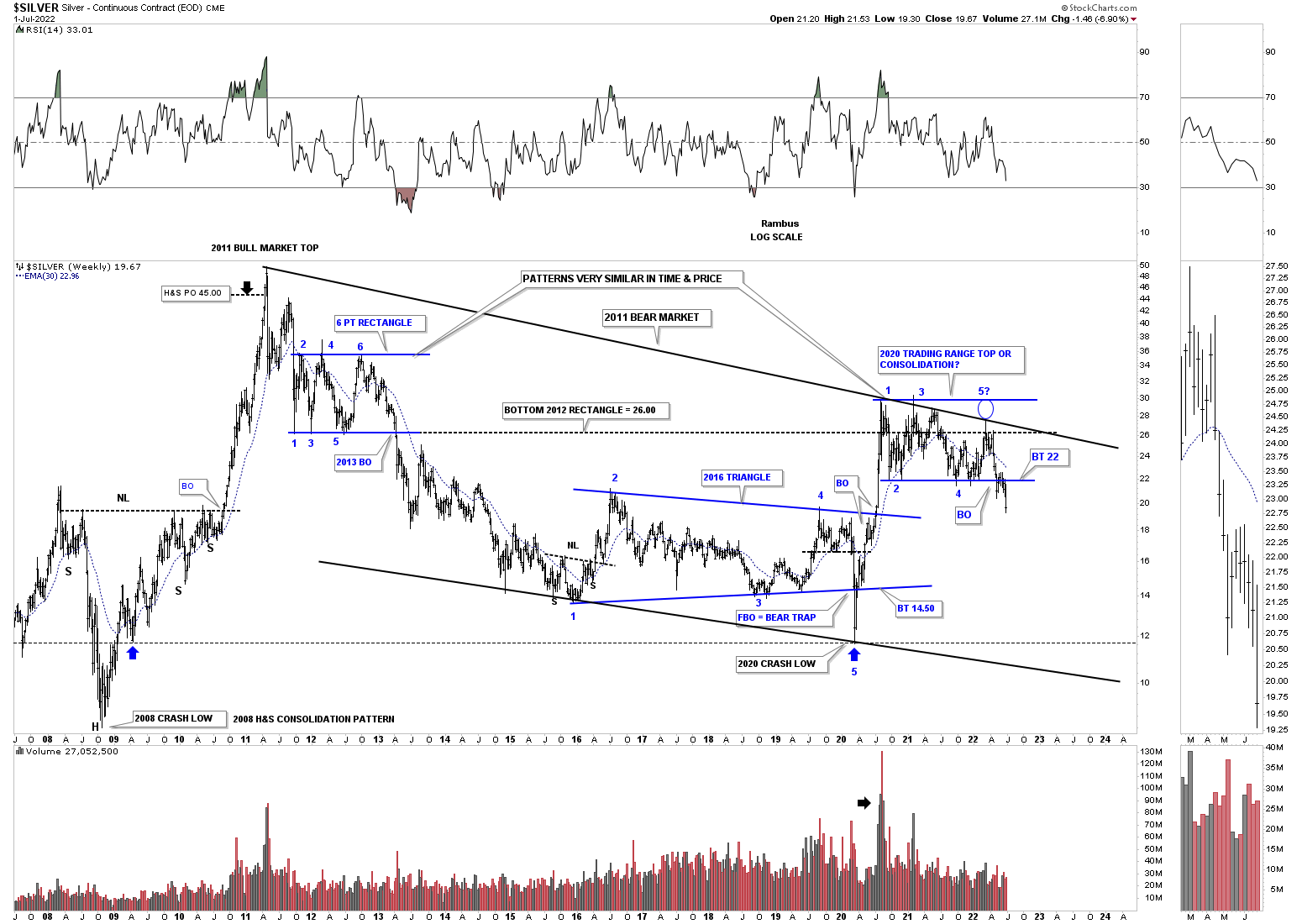 I realize that few can grasp what this big picture of Silver is strongly suggesting, but when the bottom rail of the 2020 trading range gave way the odds went way up that the top rail of the 2011 bear market downtrend channel is still hot and to be respected. The bulls had every chance in the world to hold support at the bottom blue rail, but they told us they are weaker than many think is possible. 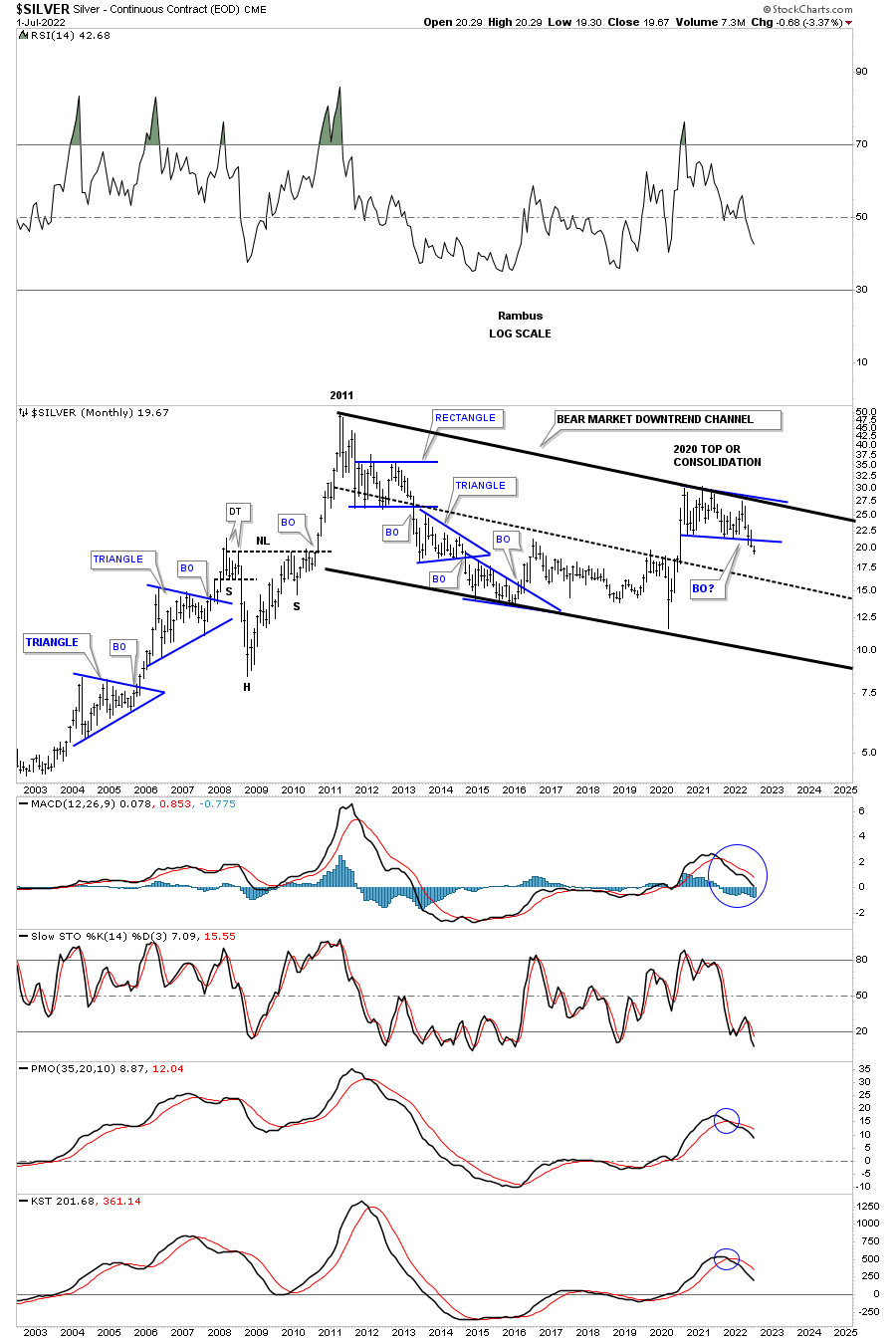 This 50 year monthly chart for Silver puts the 2011 downtrend channel in perspective. I know it seems impossible at this time, but the bulls are doing nothing to change this possible scenario. Until they do, it is what it is until it isn’t. 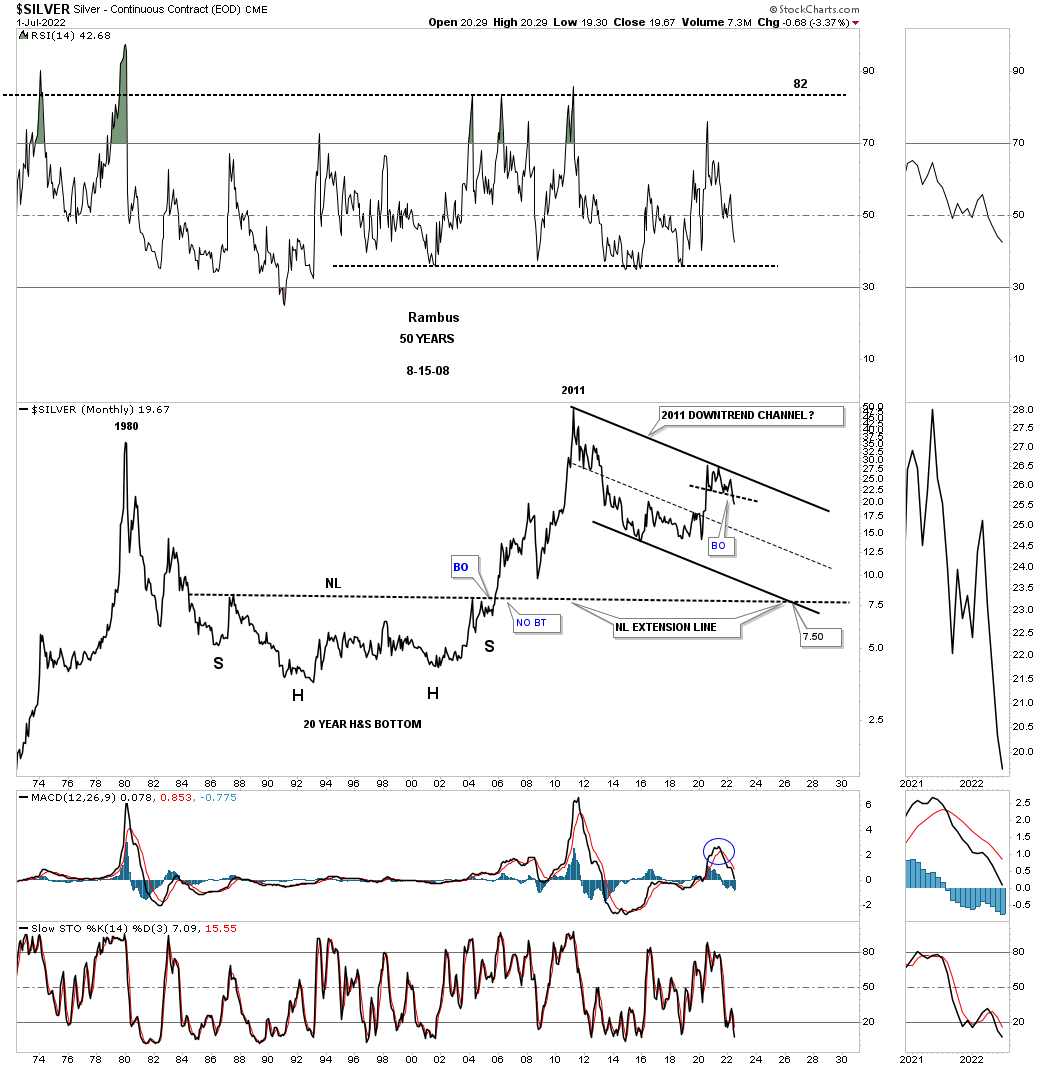 About ten months or so ago I showed this chart for Silver and the rest of the PM complex which were forming a possible massive H&S base with the neckline symmetry line holding support for the low of the right shoulder. As you can see that possible H&S bottom is fading fast as the price action is now trading below the neckline symmetry line which isn’t the end of the world of the possible H&S bottom, but it now puts it in question. It is not  pretty and symmetrical anymore. 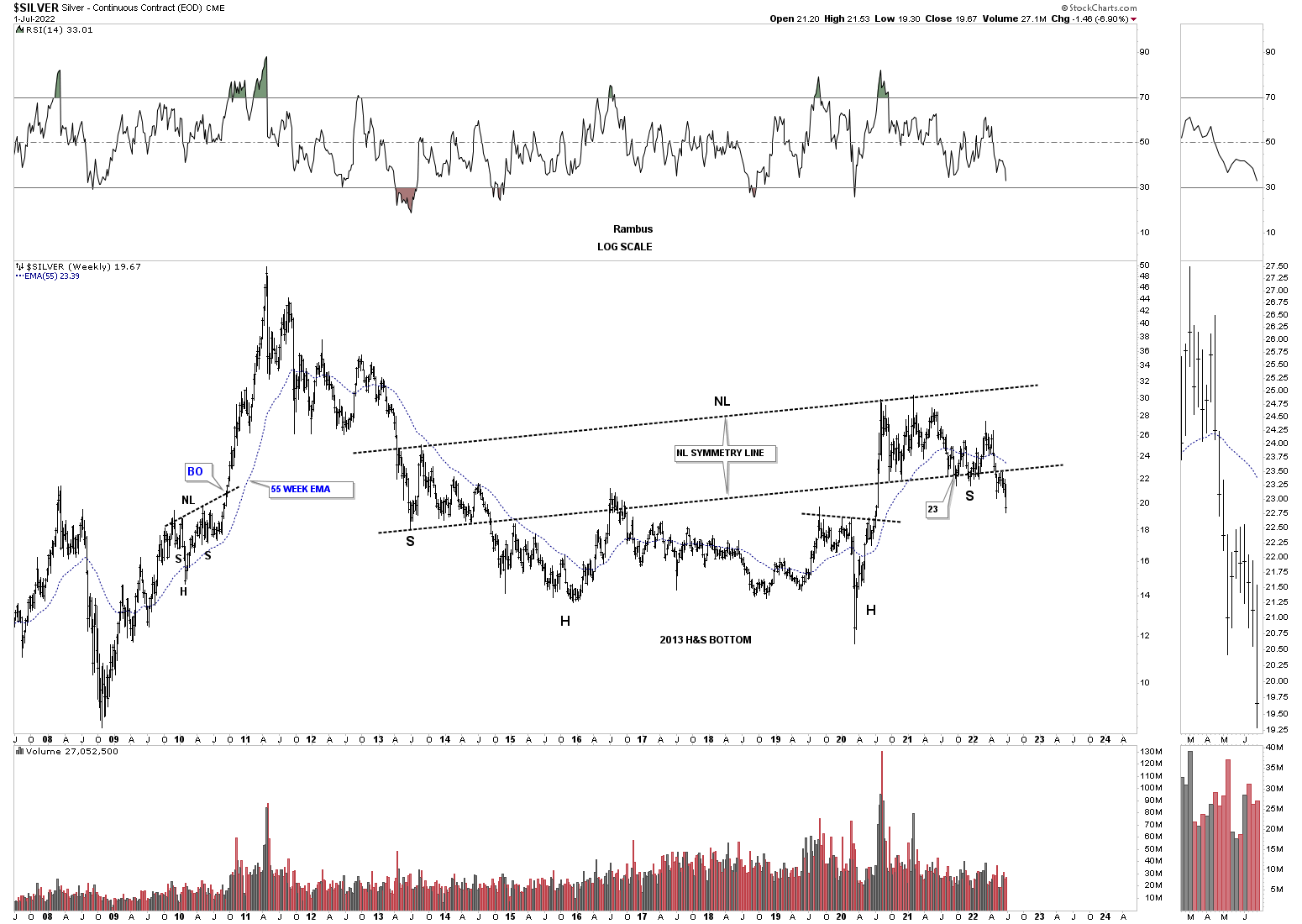 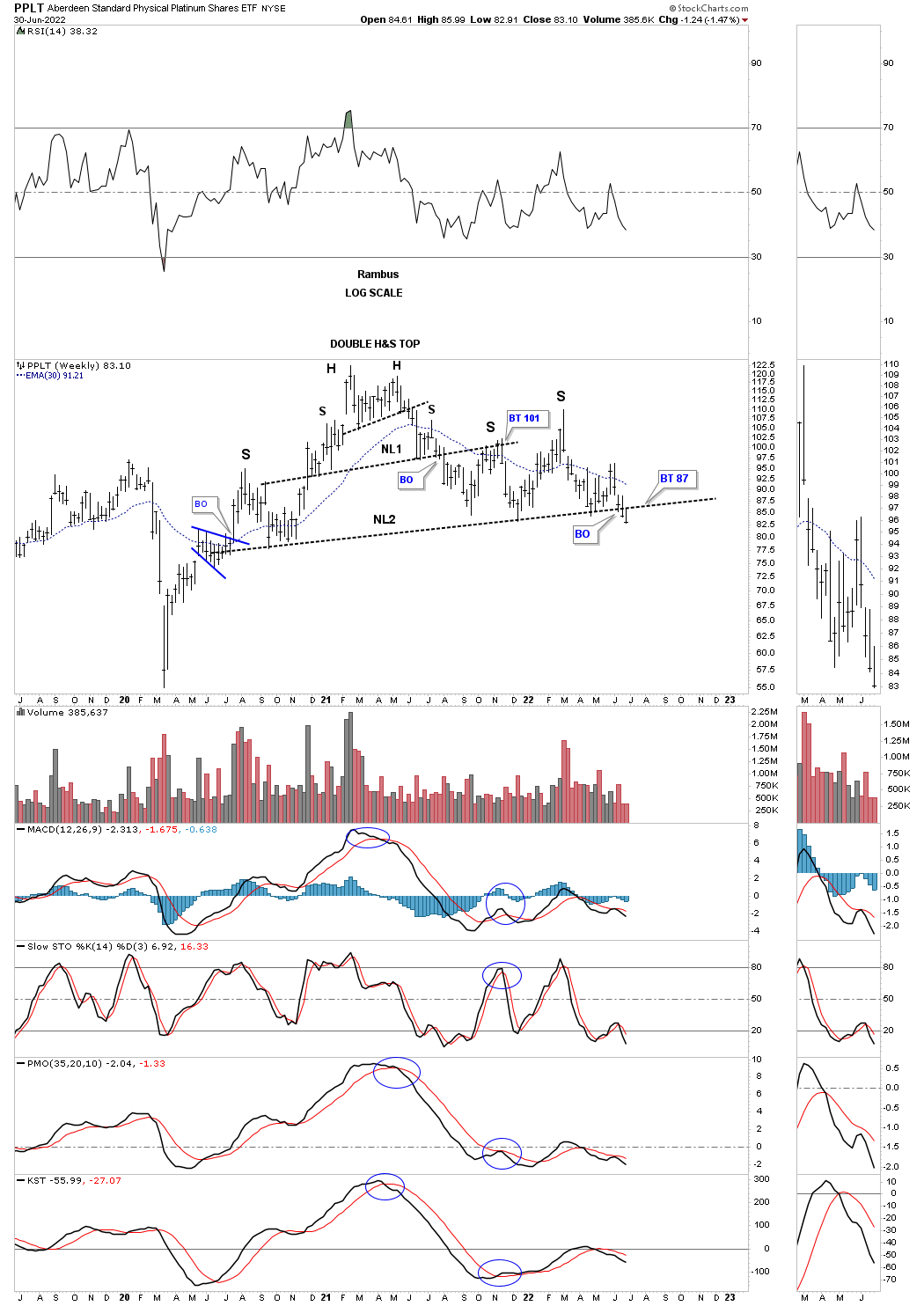 Now lets look at a couple of ratio charts to see if they can help us in determining the next important move in the PM complex. This first ratio chart compares Gold to the US dollar which shows the ratio built out a very large H&S bottom, meaning Gold was outperforming the US dollar into the 2020 high. As you can see the price action fell just shy of reaching the minimum price objective for the H&S bottom.

Since the high made in 2020 the ratio formed the five point blue triangle reversal pattern that shows a breakout and backtest that may be complete. I don’t want to sound like a broken record, but if the Gold bulls were in charge the triangle should have broken to the upside and not the downside. 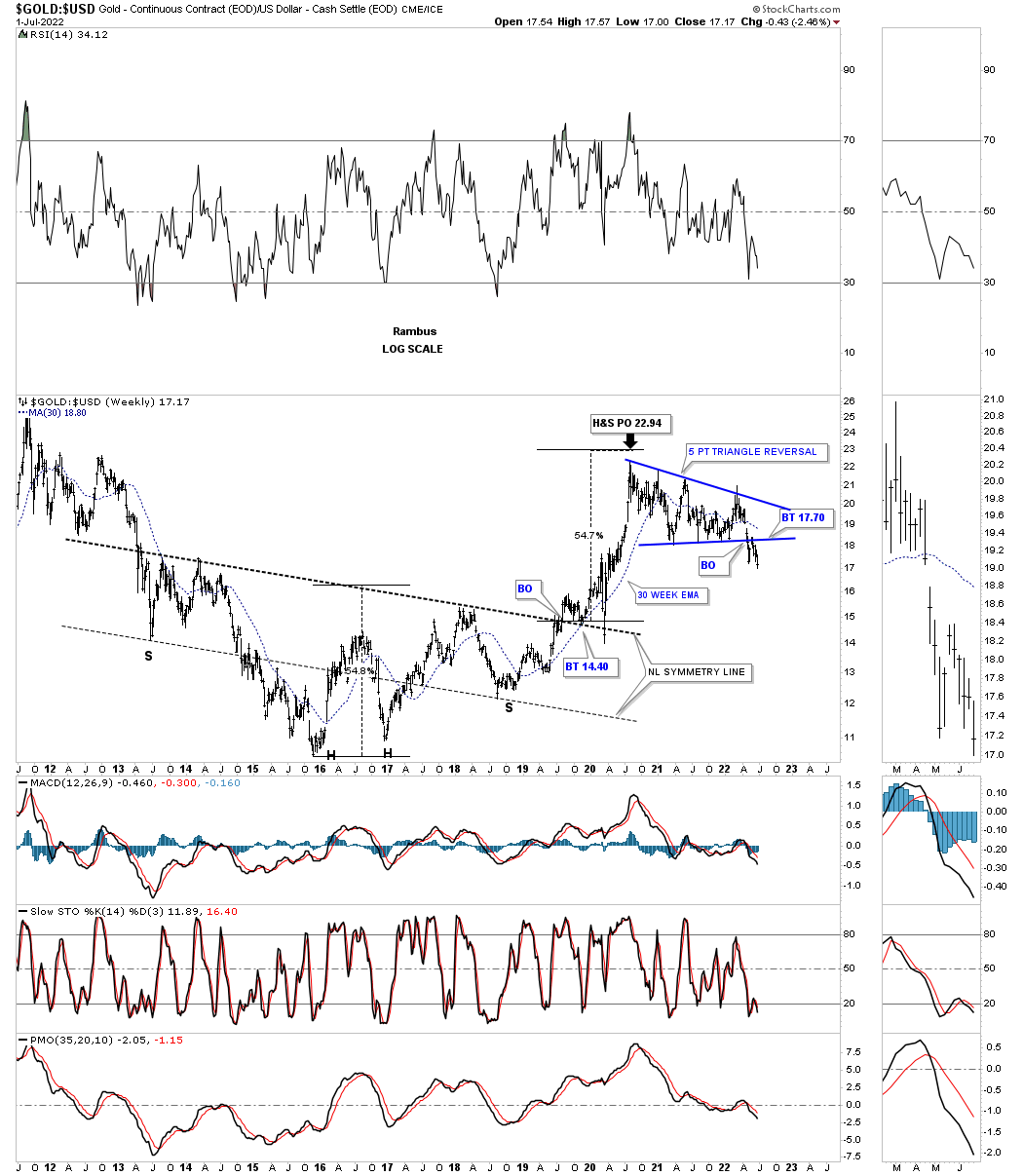 Everyone who follows the Gold:Silver ratio has their own interpretation of what it means. For me when the ratio is rising that is generally, but not always, not a good time to be in PM stocks. Since the 2020 low in the ratio and the high in the PM complex the ratio has broken back above 80 which is not a bullish sign if one is long the PM complex. Again, it is not the end of the world, but a huge warning sign to stay vigilant if one is thinking about entering the PM complex. 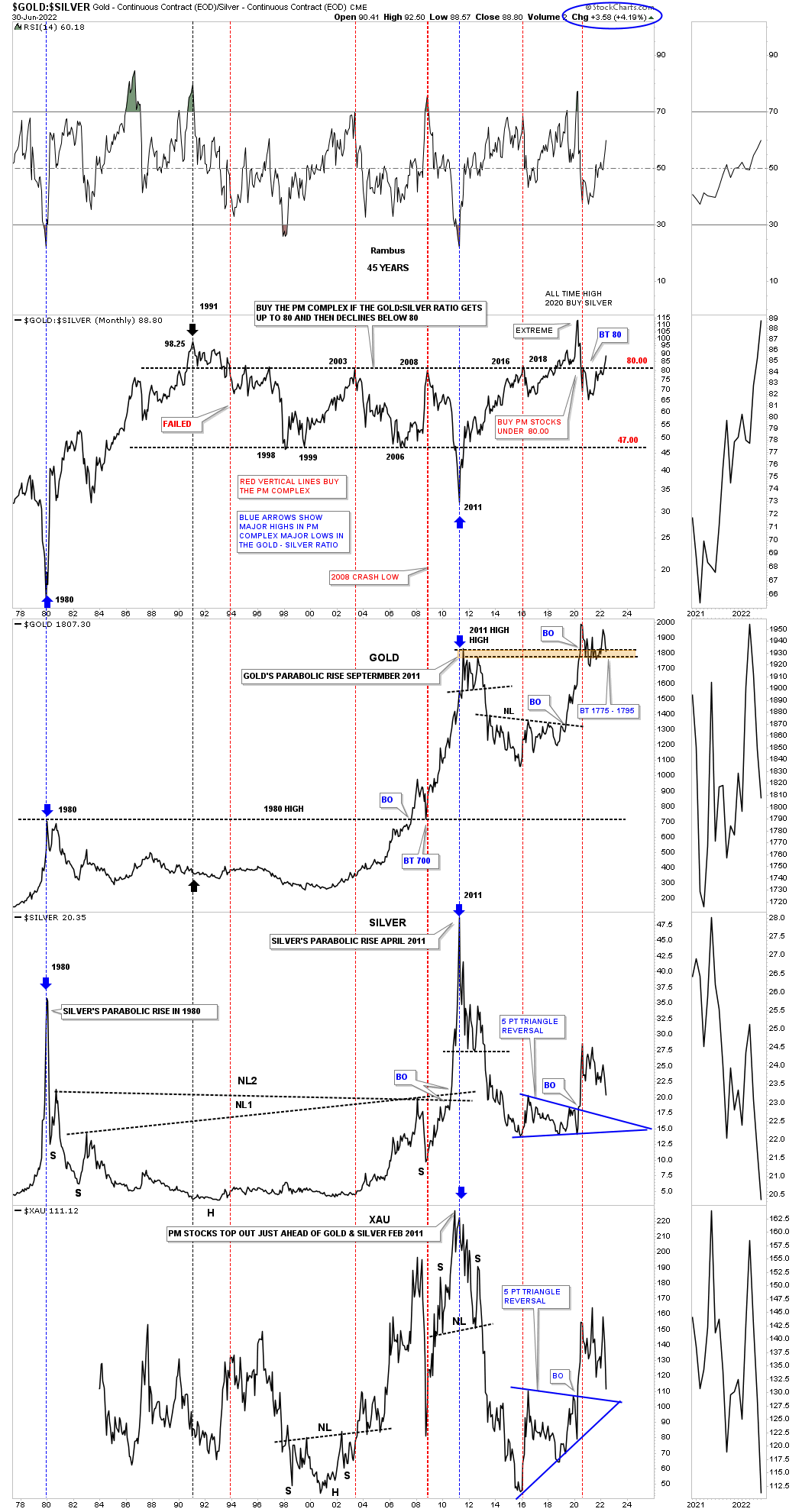 Lets look at a few PM stock indexes to see if they can give us any good clues on the next important direction for the PM stocks. Lets start with the long term monthly chart for the HUI which shows its 2000 bull market uptrend channel. The two black rectangles measure each half of the uptrend channel. The HUI could decline down to the bottom rail and the bull market would still be intact with no damage done, frustrating the bulls. 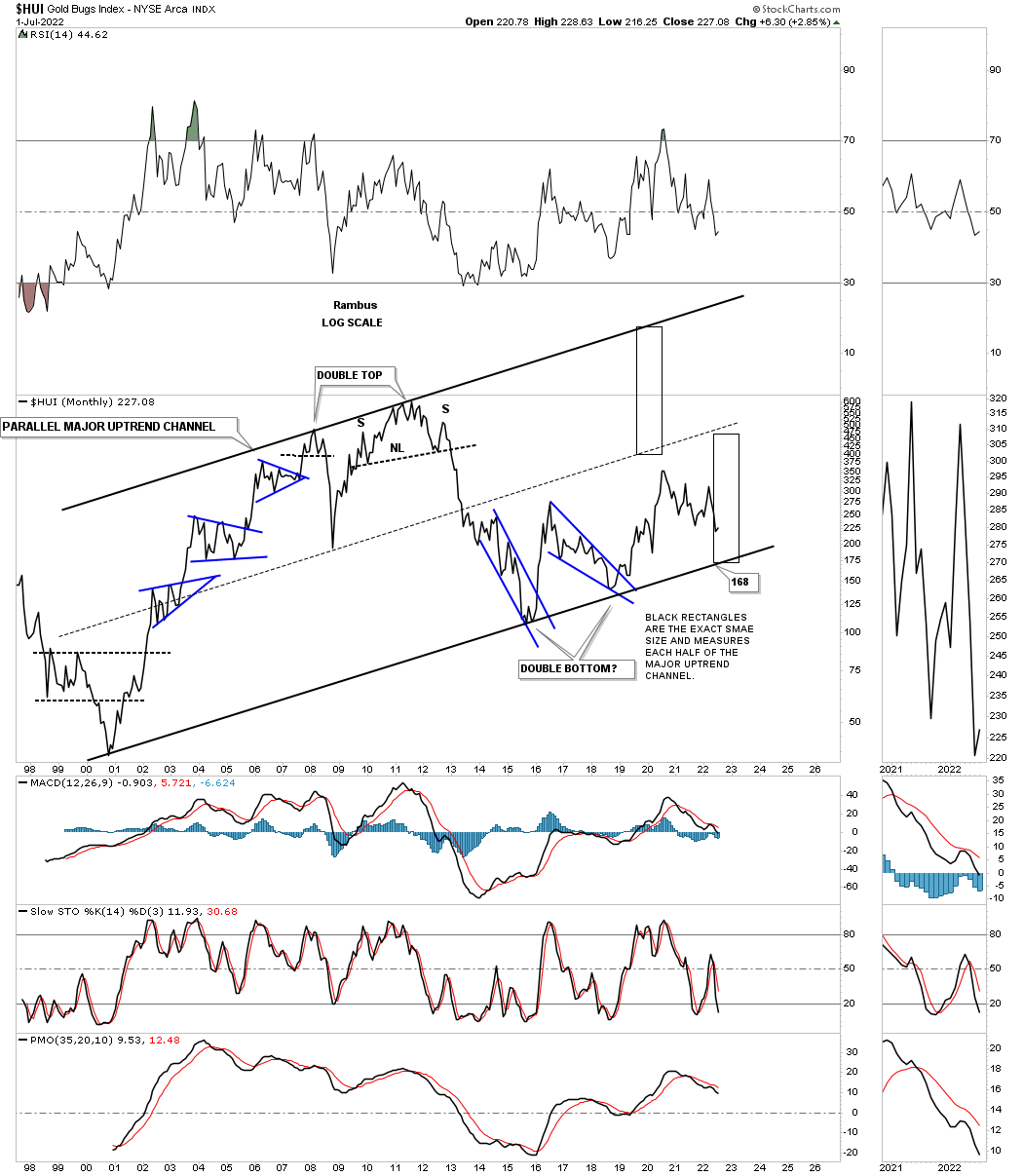 And then there is another possibility that few are even aware of which is the possible 2016 rising wedge formation. As you can see each important reversal point comes at an important top or bottom in the past five years or so. A touch of the bottom rail will complete the all important 4th reversal point in the rising wedge and is where the bulls need to step up and hold support. If they fail to do so the rising wedge will then be a consolidation pattern to the downside. 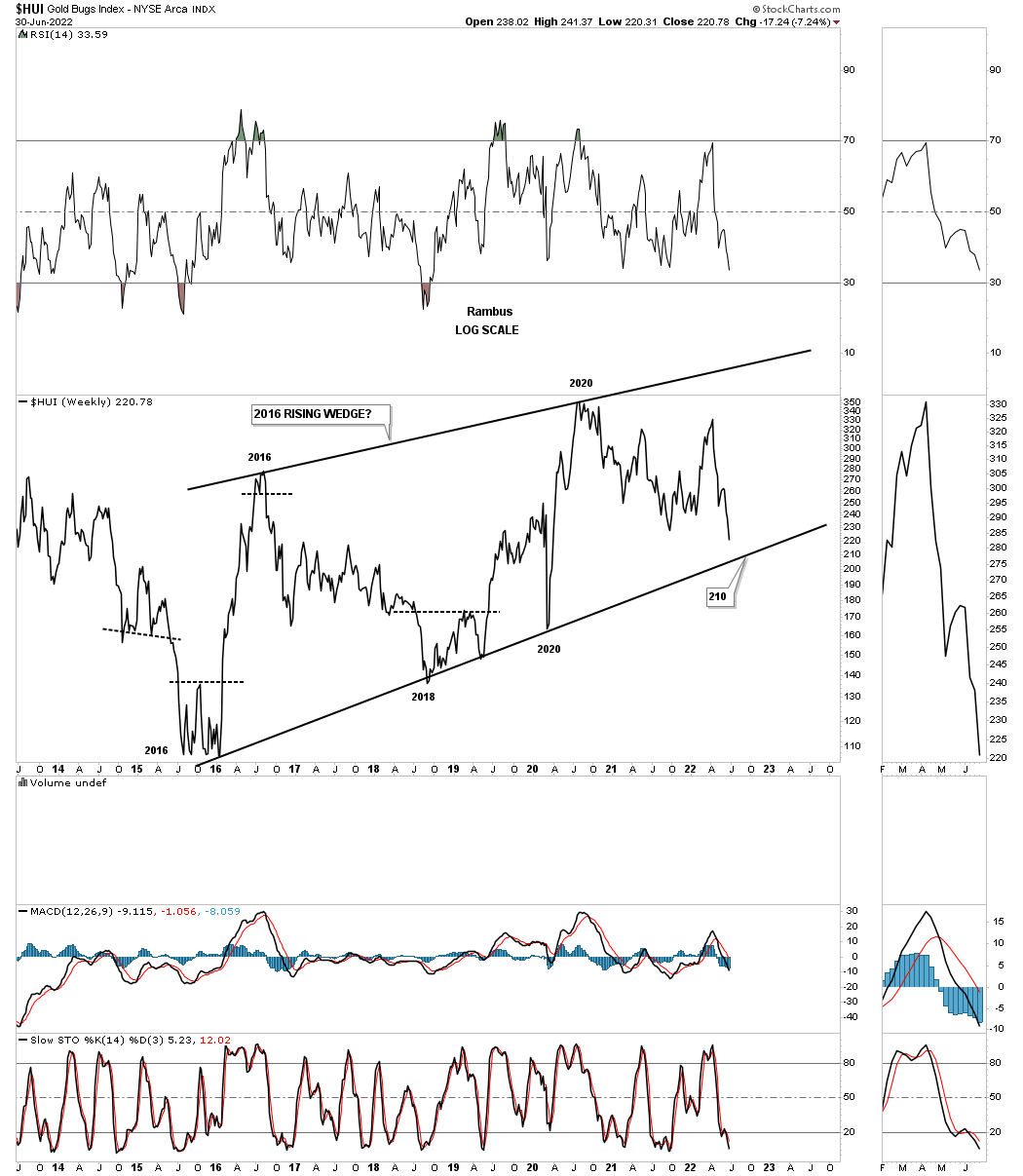 This longer term bar chart for the HUI shows how the 2016 rising wedge would look as a halfway pattern if the bottom blue trendline is broken to the downside. 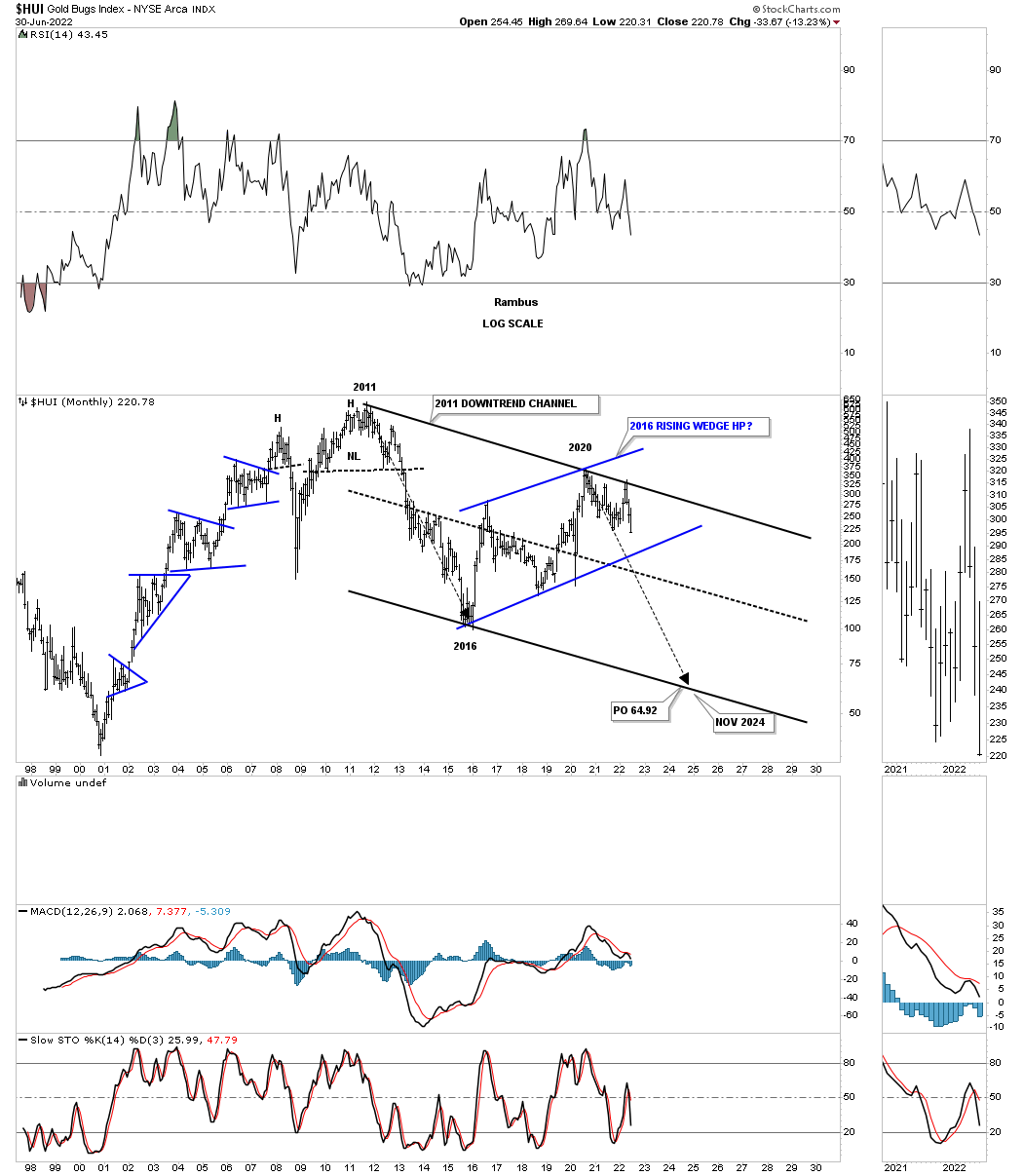 This monthly chart for the GDX shows the 2013 brown shaded S&R zone, which has been holding support since the 2020 high, with the price action closing last week below it. During a strong impulse move down you will generally see a string of black candlesticks all in a row, with the end of June showing the third. Just the opposite in a strong impulse move up where you will see a string of white candlesticks. 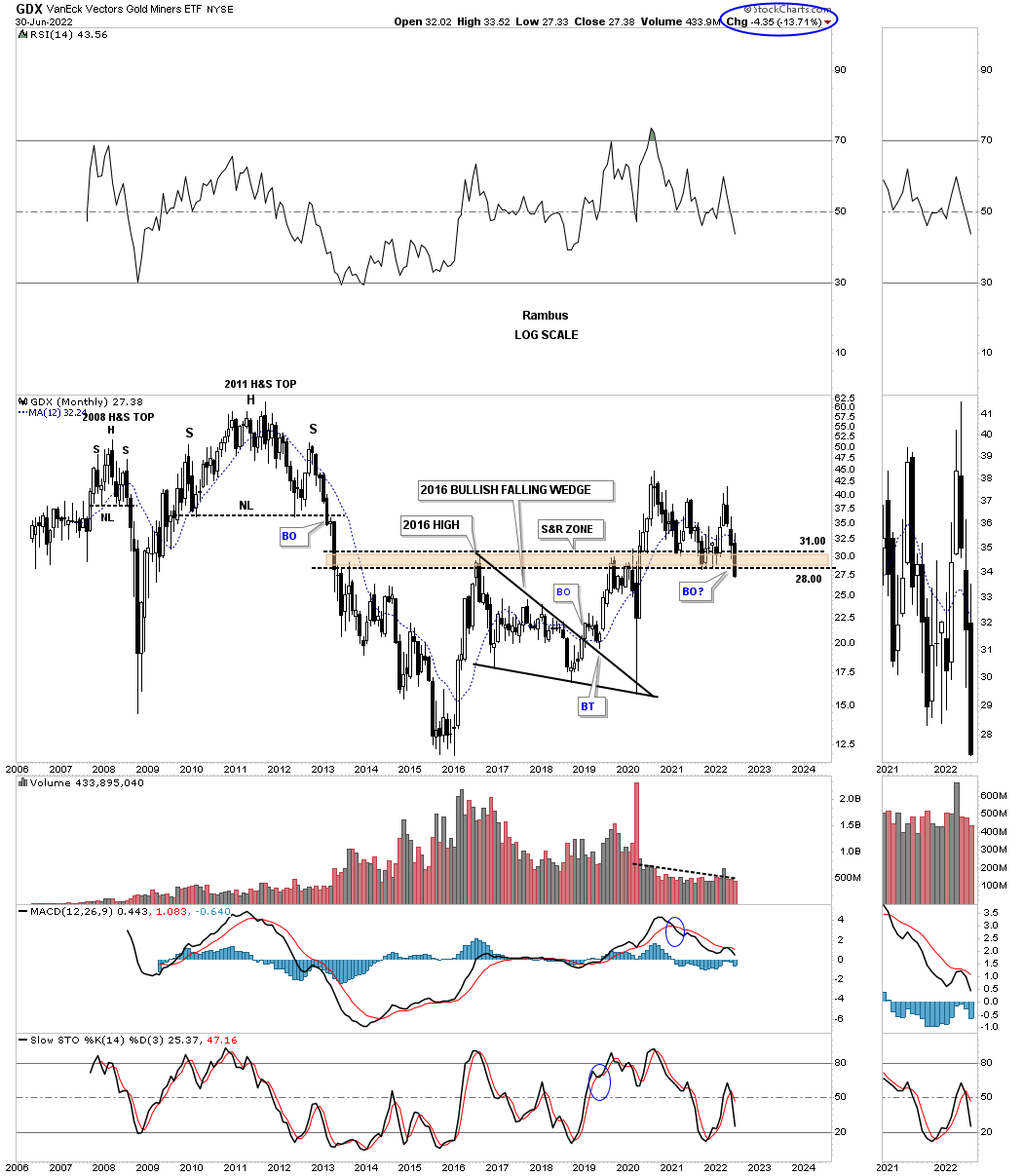 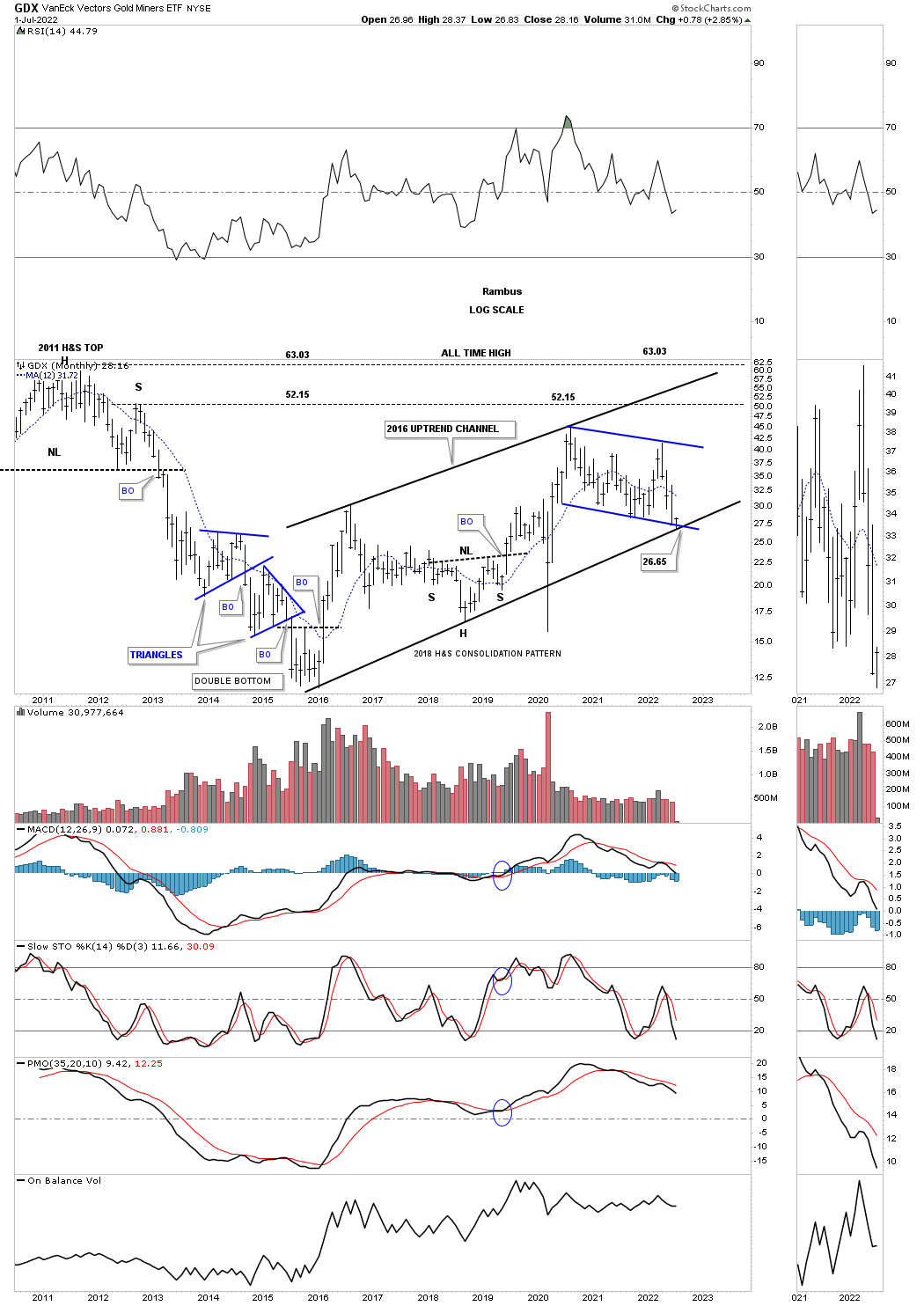 This monthly line chart shows how the blue rising channel would look in the 2011 downtrend channel as a possible halfway pattern to the downside. 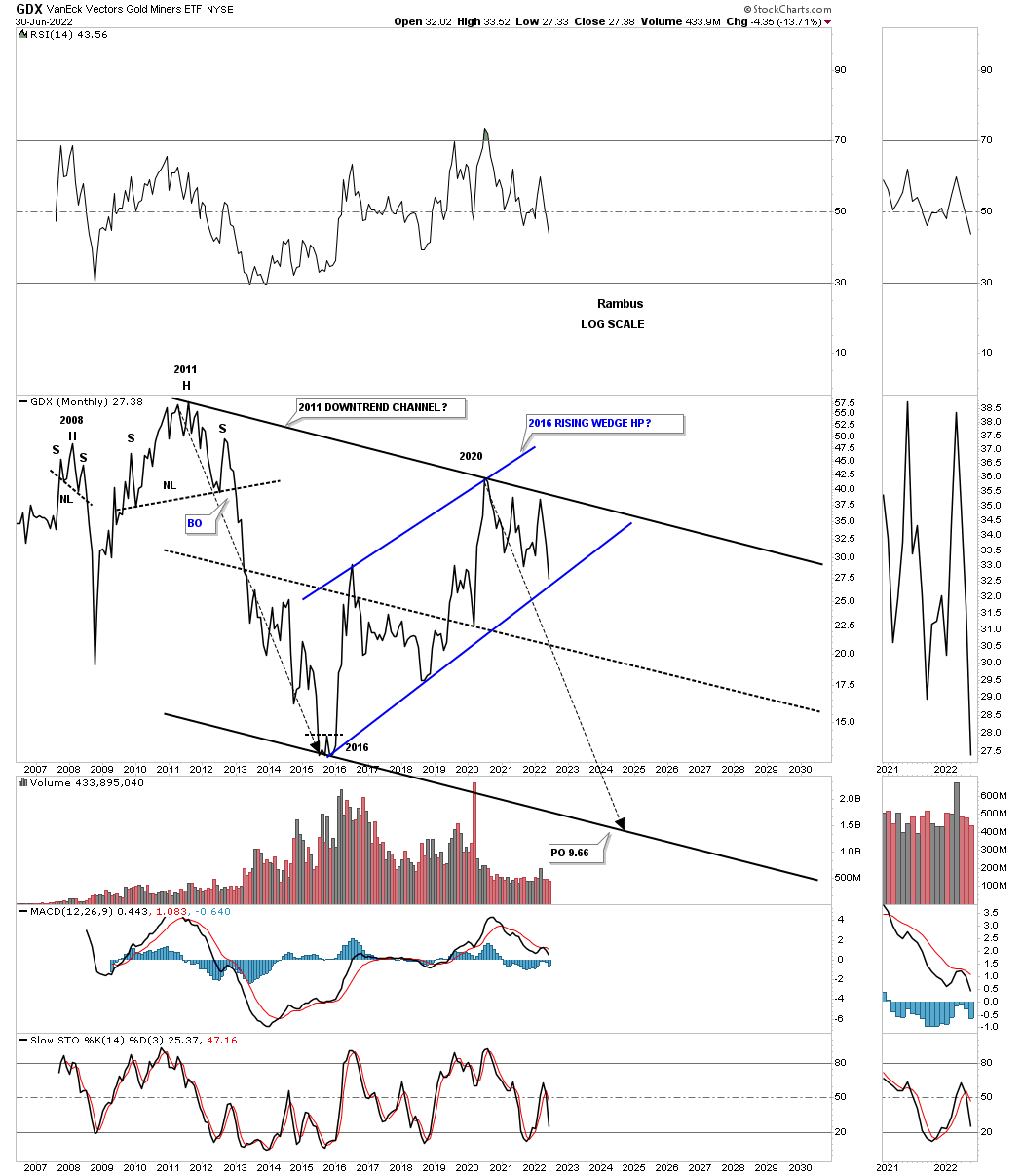 The monthly bar chart for the GDX. 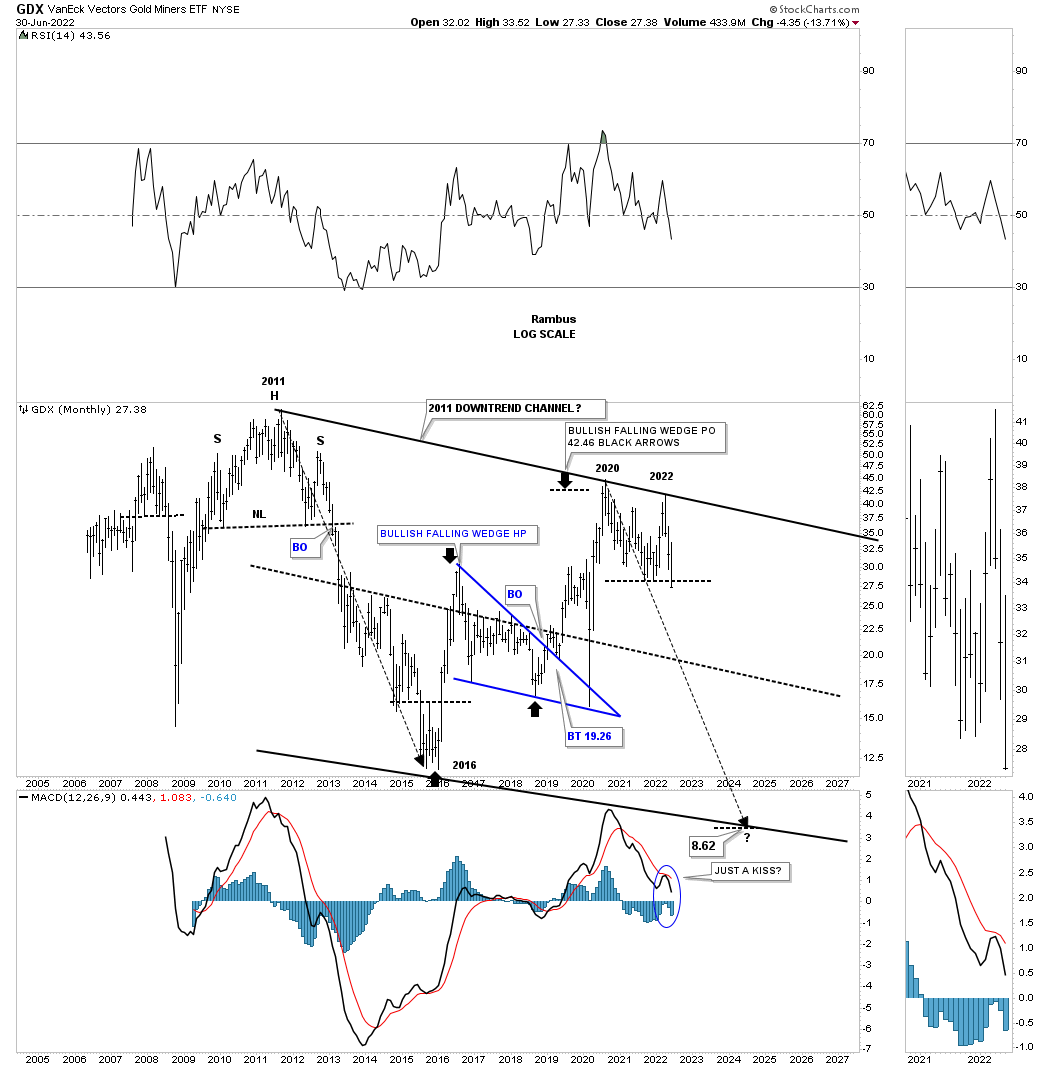 Something happened this quarter that I wasn’t excepting when the 2nd quarter began. This quarterly line chart for the GDX shows the price action closing the quarter below the S&R line going all the way back to 2013. I’ve been following that S&R line for many years  and to see it give way like that was very interesting. As you can see I’ve labeled the price action above it as a double top reversal pattern which I have to admit I wasn’t expecting when the quarter began three months ago. 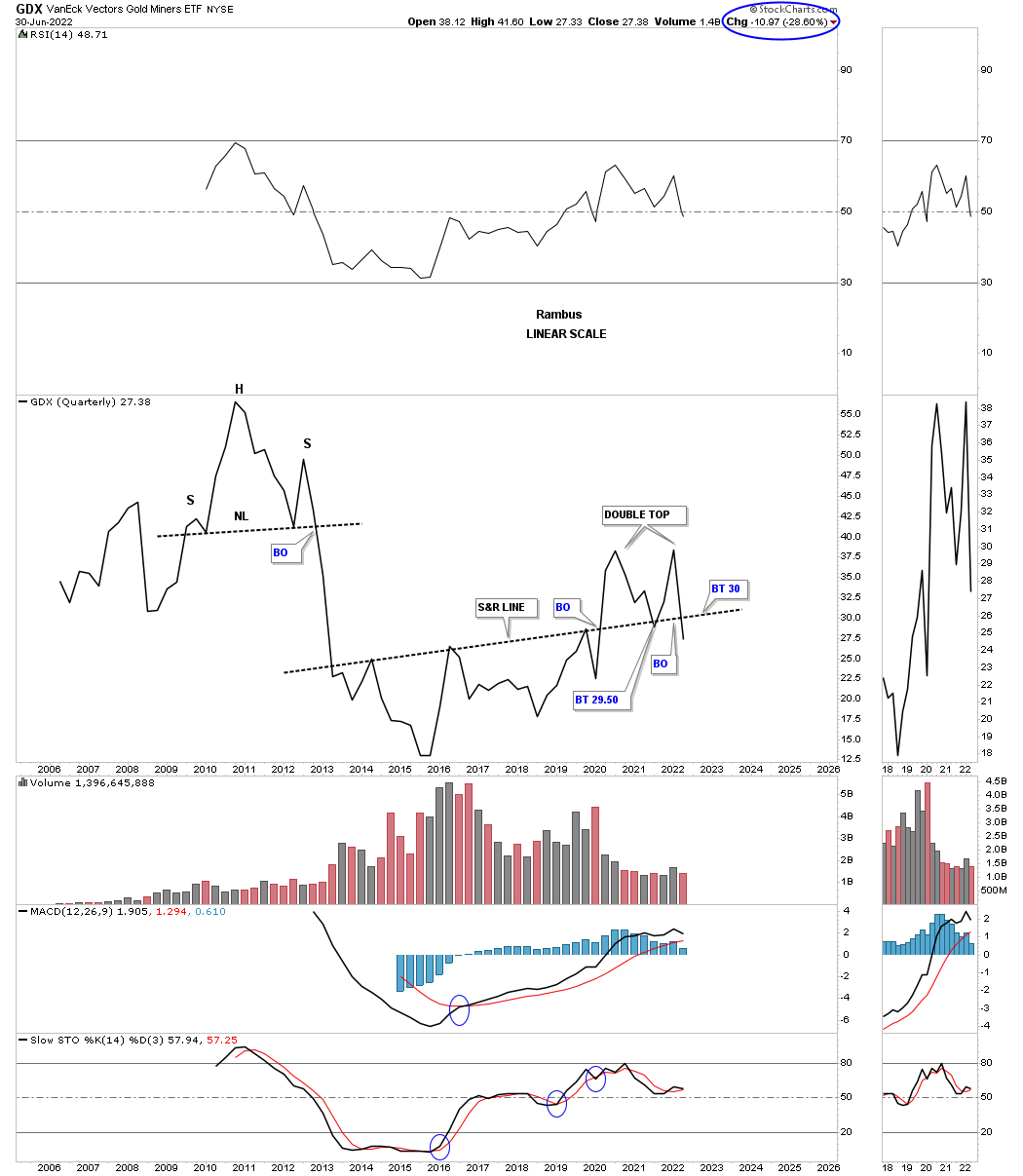 I’ve been mentioning for quite sometime that Silver and the GDXJ have been the weakest areas in the PM complex. This monthly line chart for the GDXJ, junior miners, closed the month of June below the bottom rail of its 2016 rising wedge formation. Now we’ll see if the bottom rail can hold resistance on the backtest. 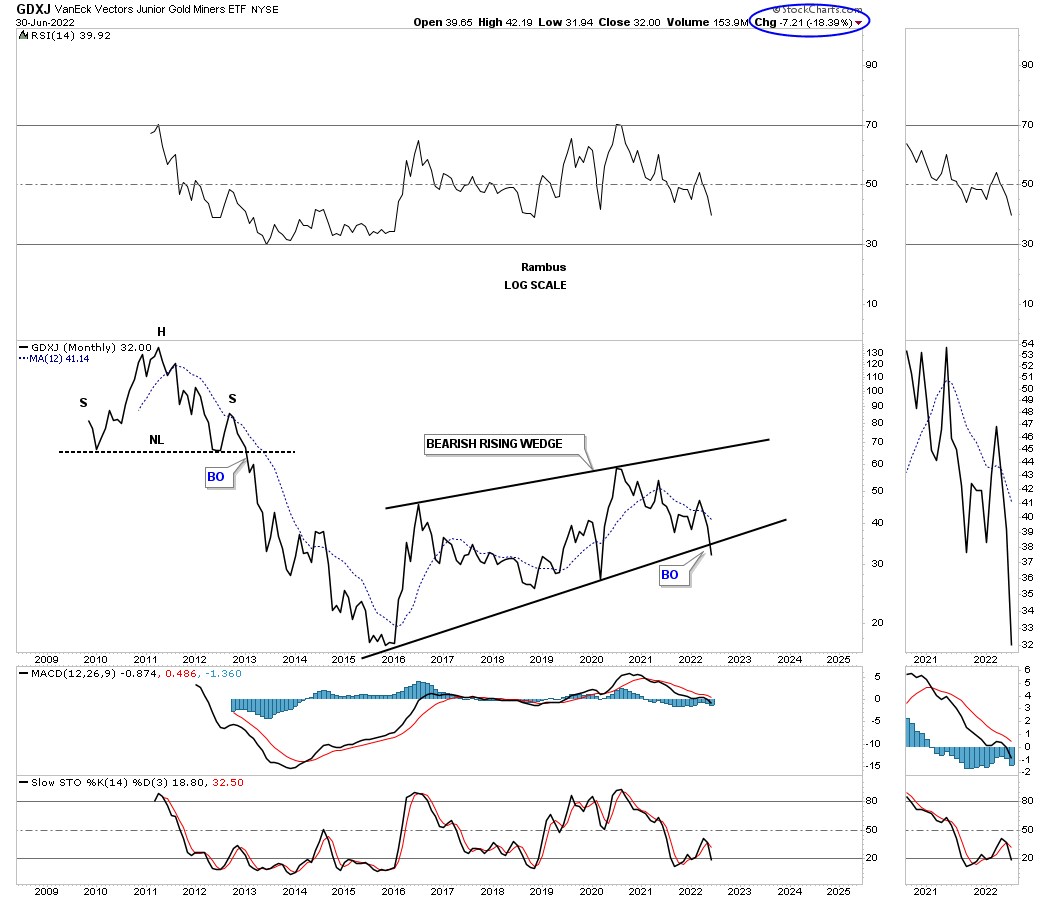 This history chart for the GDXJ shows how the 2016 rising wedge fits into the very big picture. Again, now we’ll see if the backtest can hold resistance. 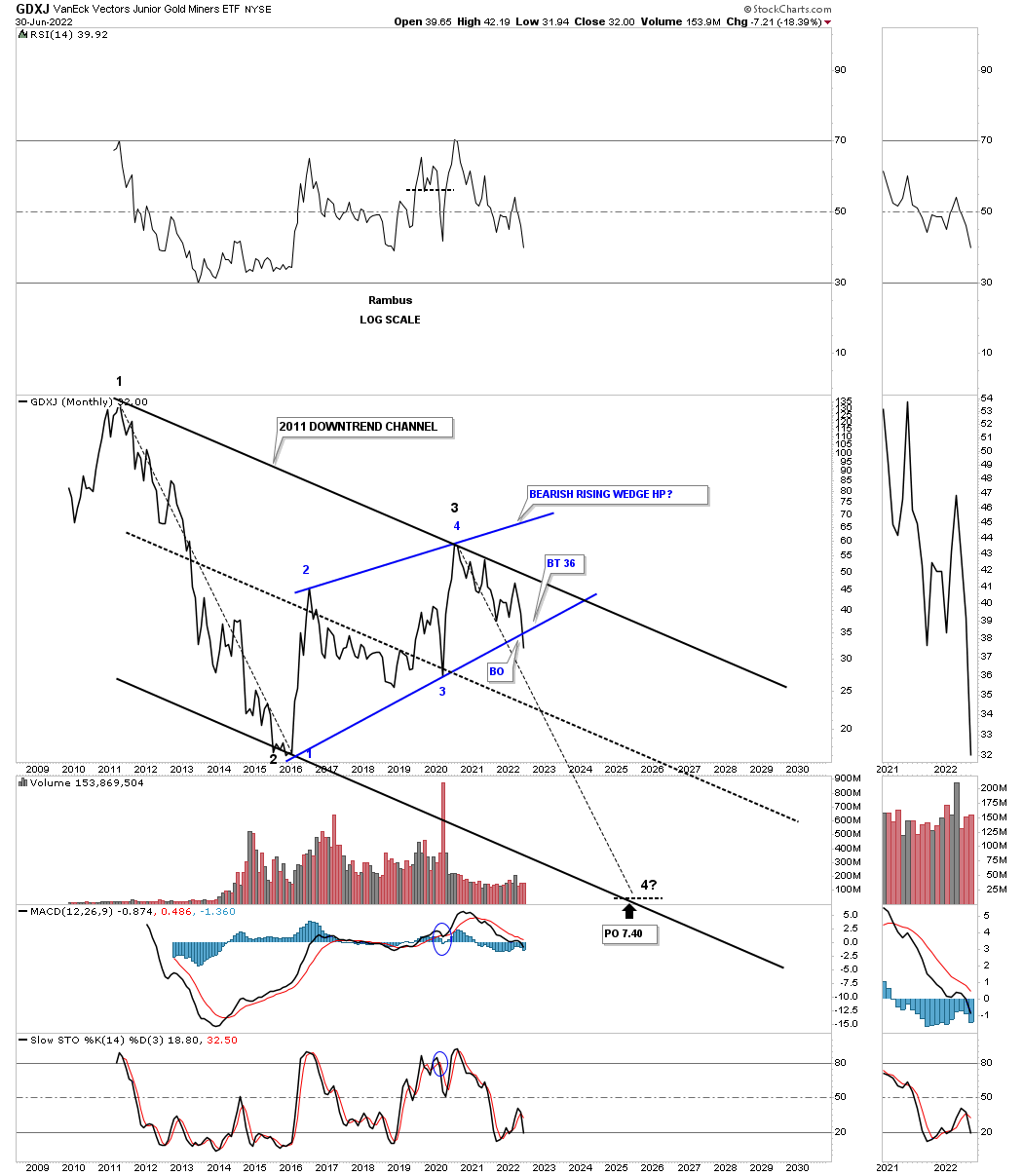 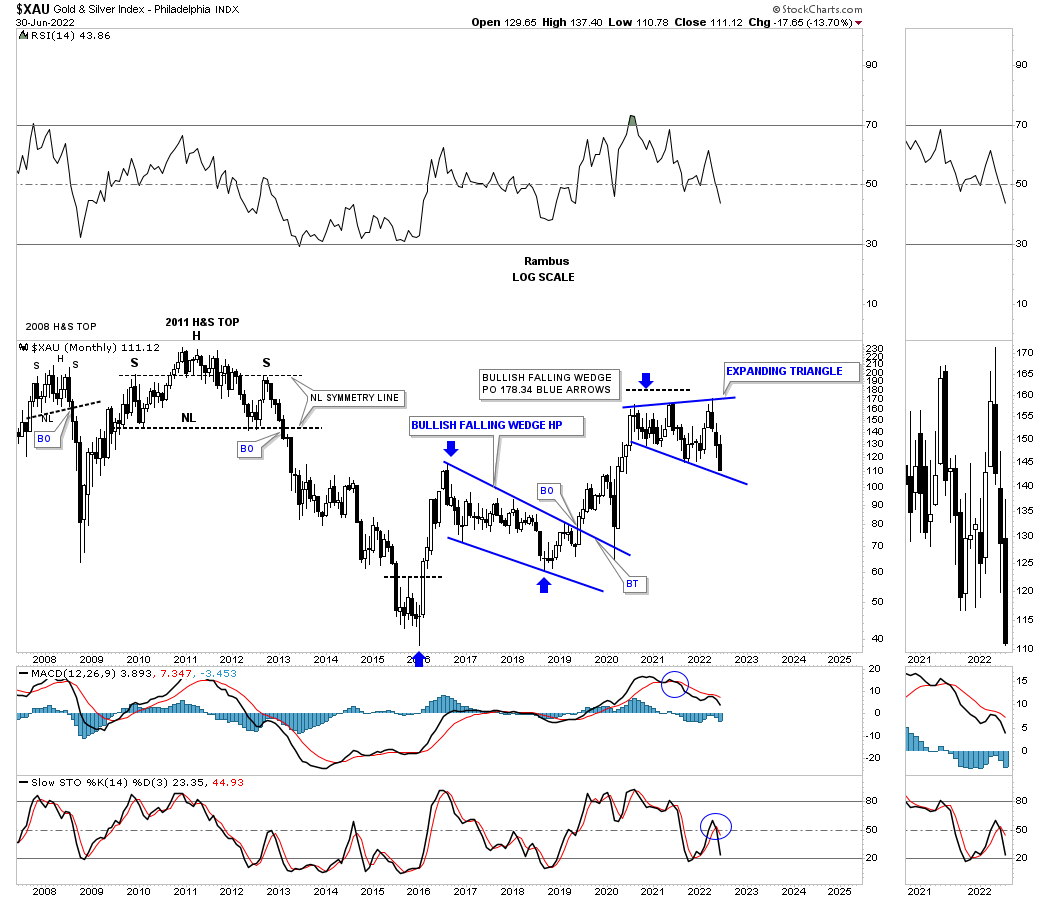 This next chart I believe is the most important chart for letting us know if a big move down is a possibility. This triple combo chart has GLD on top with SLV in the middle and the GDX on the bottom. What this combo chart is showing us is the potential for a massive double top with the 2011 high on the left side of the chart and the 2020 high on the right side.

The last time we looked at this triple combo chart GLD was trading well above its 2020 S&R line, but is now touching it. SLV on the other hand had already broken below its S&R line and completed the backtest before making a lower low last week. Will SLV be leading the breakout to the downside this time like the GDX did back in 2013? We should find out in the not too distant future.

There are a lot of analysts that are looking at the 2011 and 2020 highs as a big cup and handle formation that is going to send the PM stocks into the stratosphere. What this triple combo chart is strongly suggesting is that the PM complex could very well be putting in a major top like in 2011. You can see how fast the price action fell when the 2011 S&R line gave way which didn’t let anyone out to save their portfolio until it was too late.

Another thing that could make the possible impulse move to the downside so intense is the vertical rally out of the 2020 crash low. If there was ever a place to see some reverse symmetry to the downside this would be it especially on the initial thrust which will catch most investors off guard. I pointed out that possibility back in 2013 when the tops gave way to the downside as shown by the blue arrows. 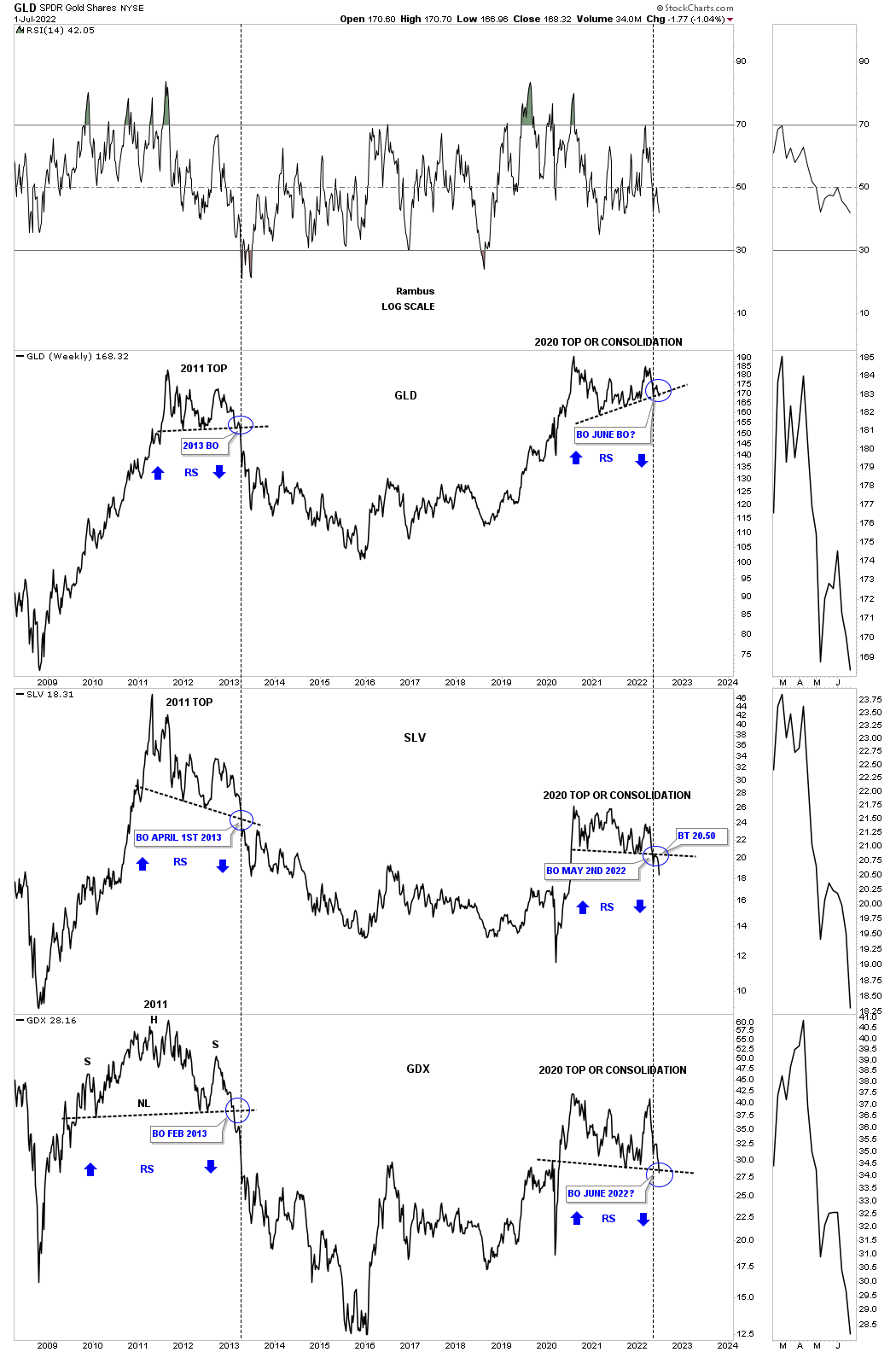 To really put what the charts above are strongly suggesting, below are many individual PM stocks showing what they think could happen. I have no reason from the fundamental point of view of why the PM stocks would move lower at this point in time, but it will become crystal clear when we look back in time.

All the charts below are pretty self explanatory and should make it pretty clear of what is about to happen in regards to many of the PM stocks. Until something important changes my game plan is to follow these charts with a clear and open mind.

Enjoy the 4th of July tomorrow. All the best…Rambus 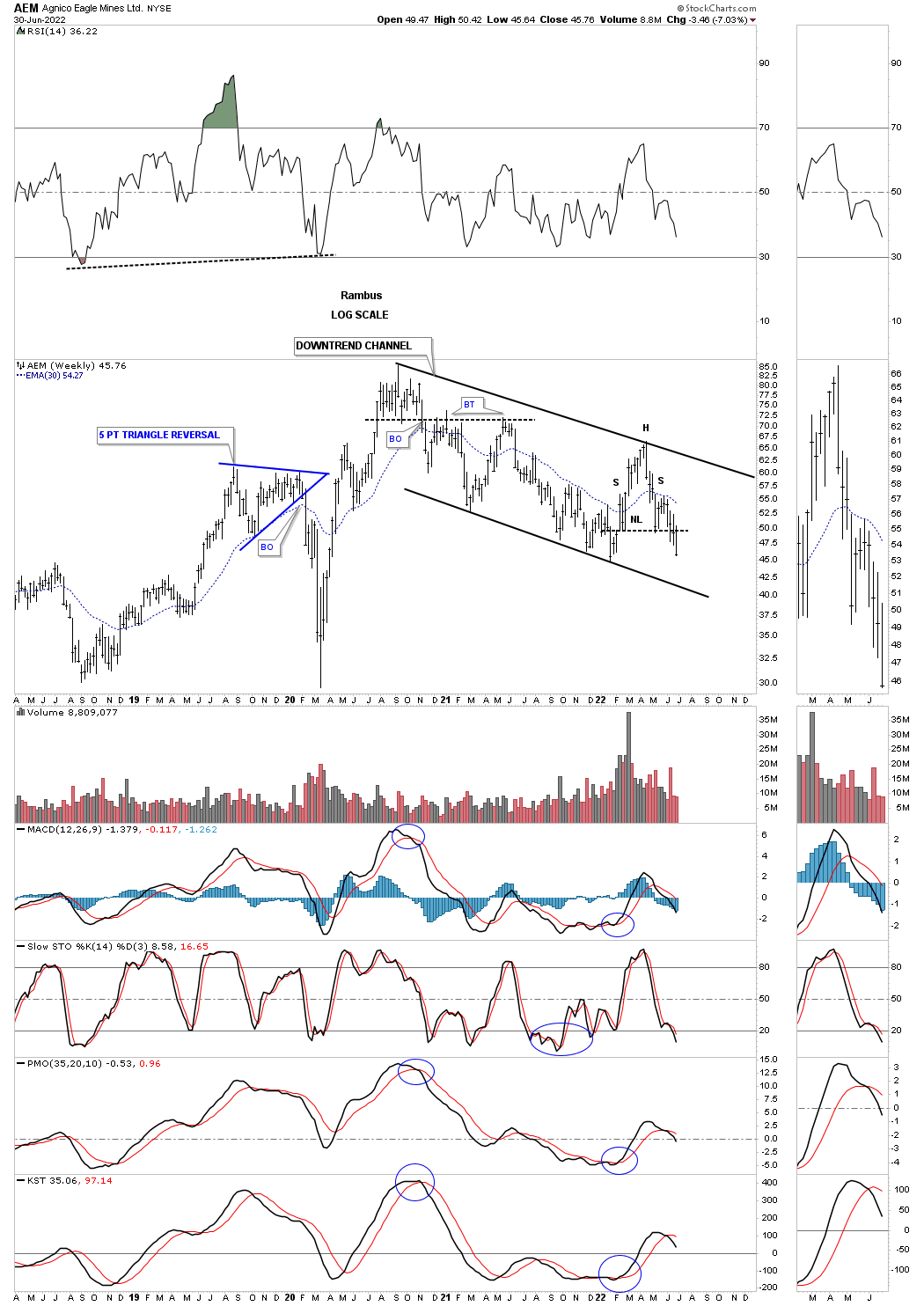 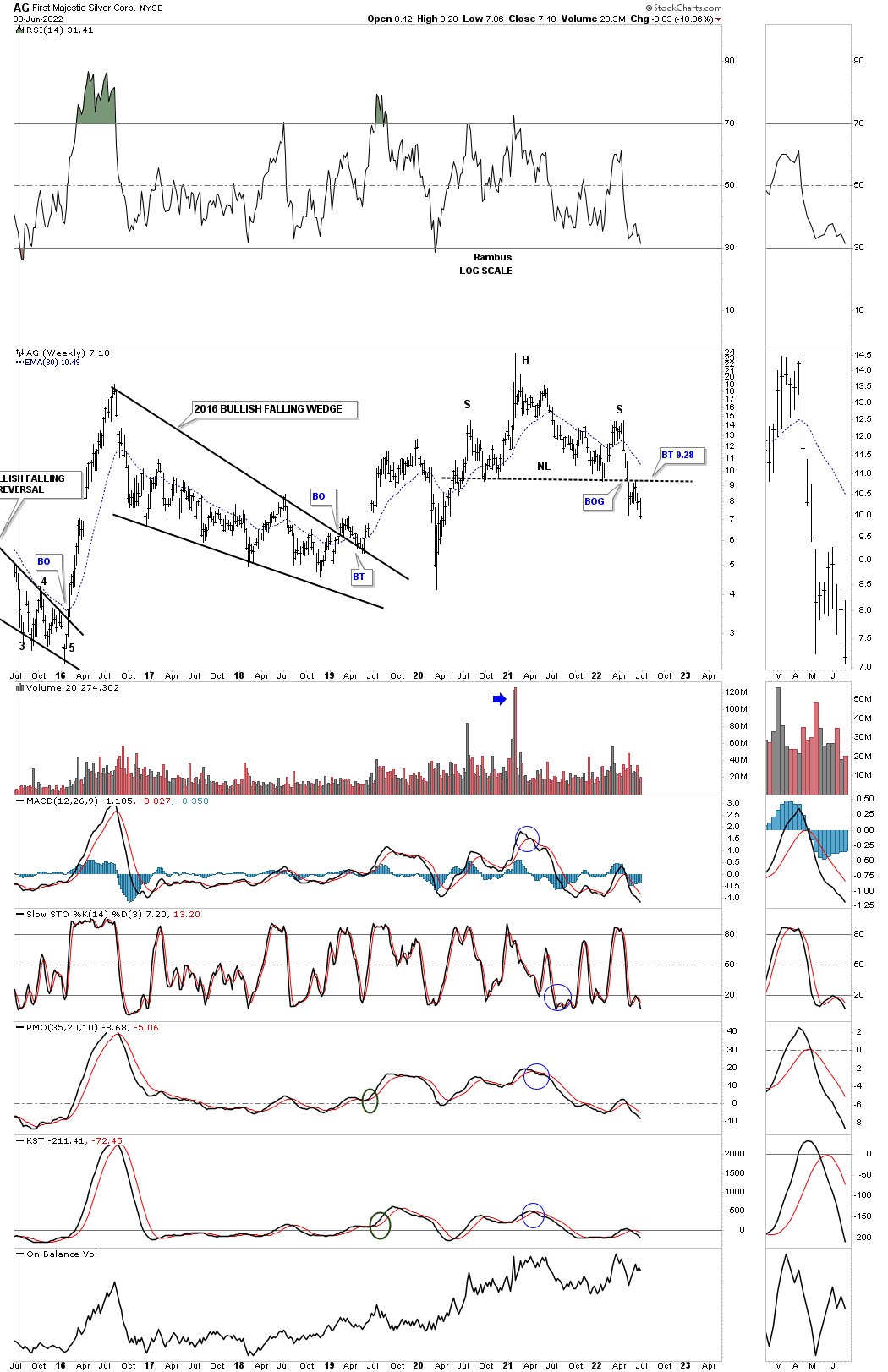 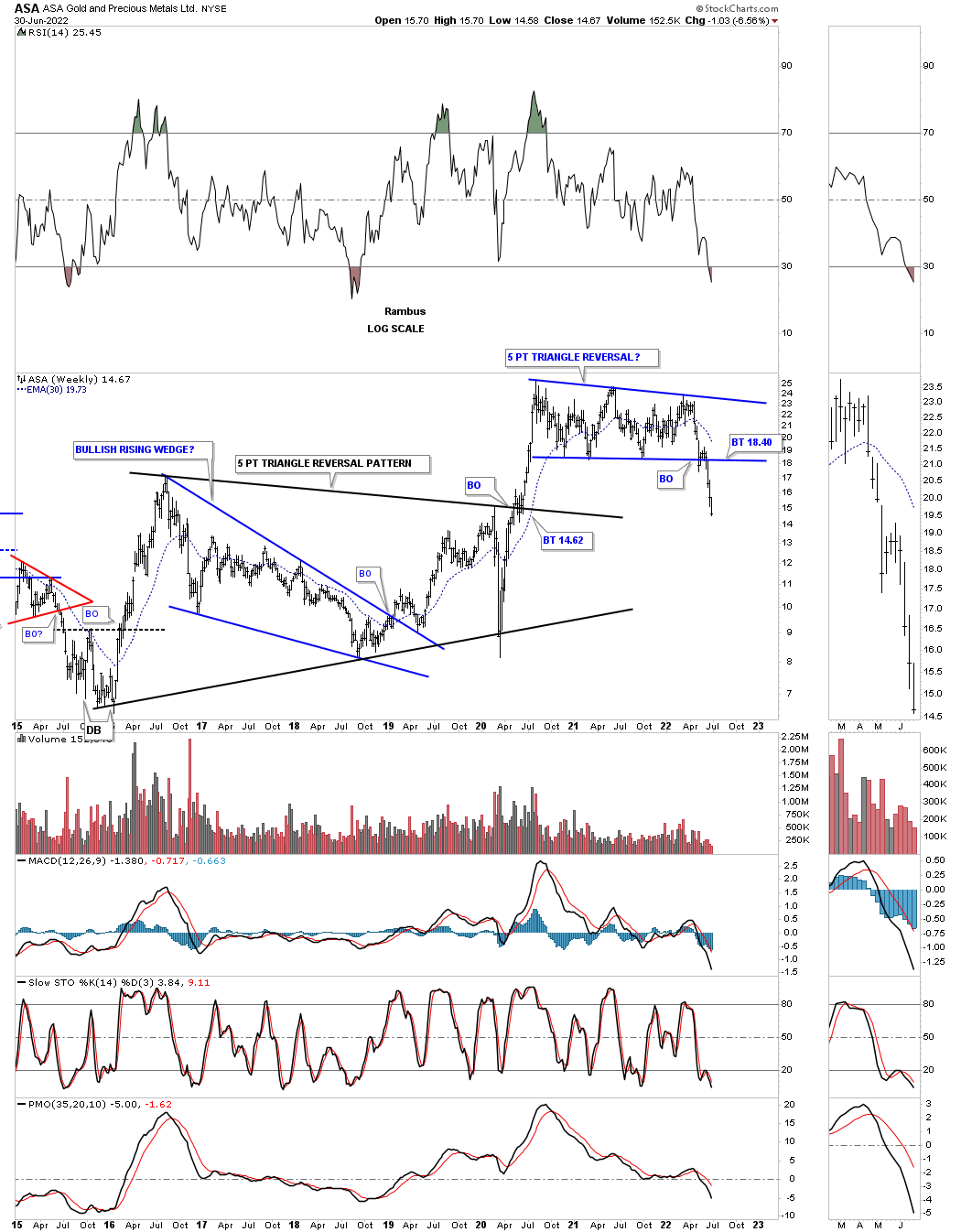 Editors Note : Many More Charts ( for members only)