Tonight I would like to update a few oil charts I posted several weeks ago when oil was breaking out of that multi year five point triangle reversal pattern.

Editor’s Note :See the links below to follow the evolution of this move in the Friday Night Energy Series .

Before we look at the bigger picture I want to show you a short term daily chart that had an interesting day. There are several things I like to look at when I see a stock that looks like it’s breaking out. First, it’s nice to see an increase in volume but sometimes it happens a day or to later. Secondly, it’s always nice to see a gap where you were expecting a breakout. That gives you a little more confidence when your anticipating a breakout and it happens right where it should. The third thing I like to look for is a long bar that covers a lot of ground. It tells us that, in oils case, there were no more bulls left to defend the support zone, so they retreat en mass looking for the next support zone to try and defend. In a bear market all the bulls can do is put up some minor support as the big trend is down and they’ll be overrun again in due time by the bears. You can clearly see this on the short term daily chart for oil below. 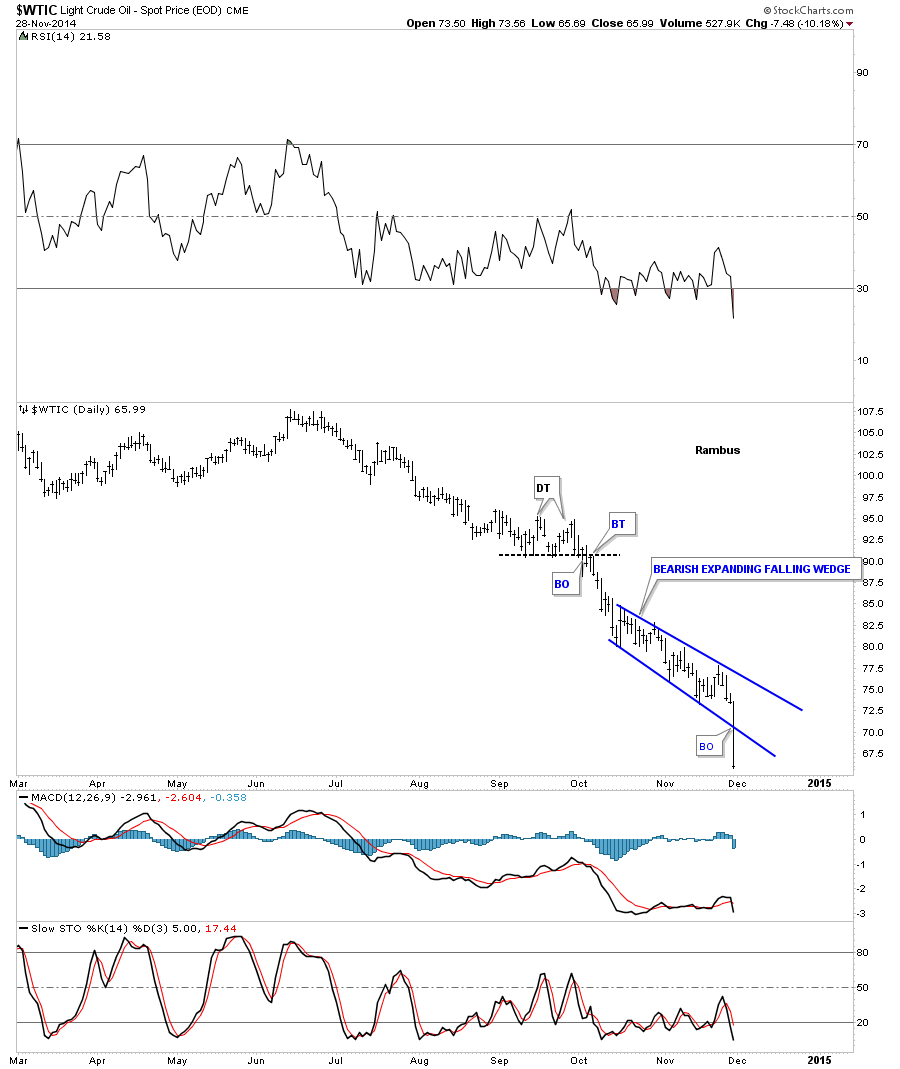 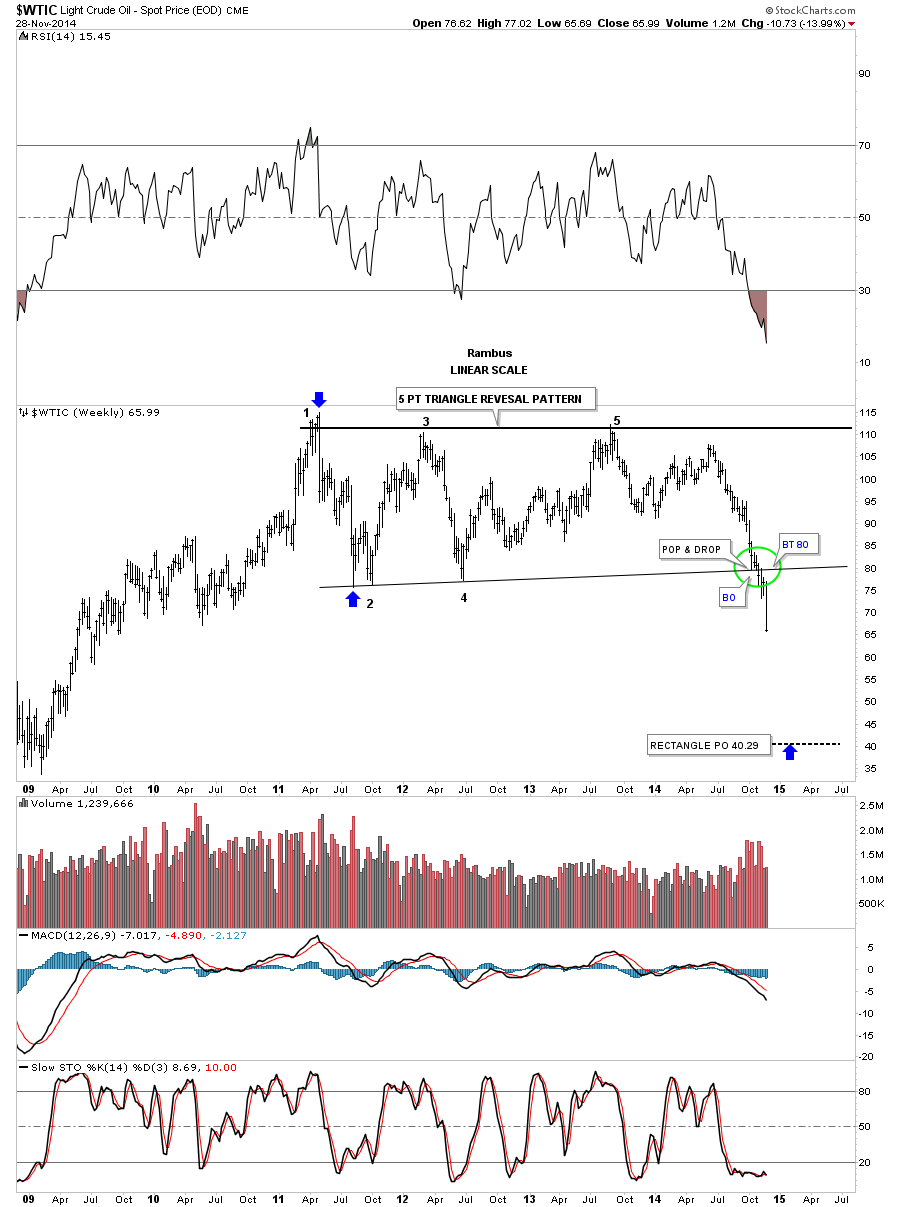 The next chart for oil is a long term daily look that shows all the different chart patterns going all the way back to 2006. It shows the beautiful parabolic rise  back in 2007 & 2008, that as a chartists, I live for. To experience and follow every wiggle that a parabolic move makes, both up and down, is as exciting as it gets. After bottom in late 2008 and 2009 oil put on a decent rally forming the red Diamond as a halfway pattern to the high in 2011 where almost all commodities topped out including gold and silver. I would expect we’ll see some reverse symmetry now going down vs how oil went up into the 2011 high. 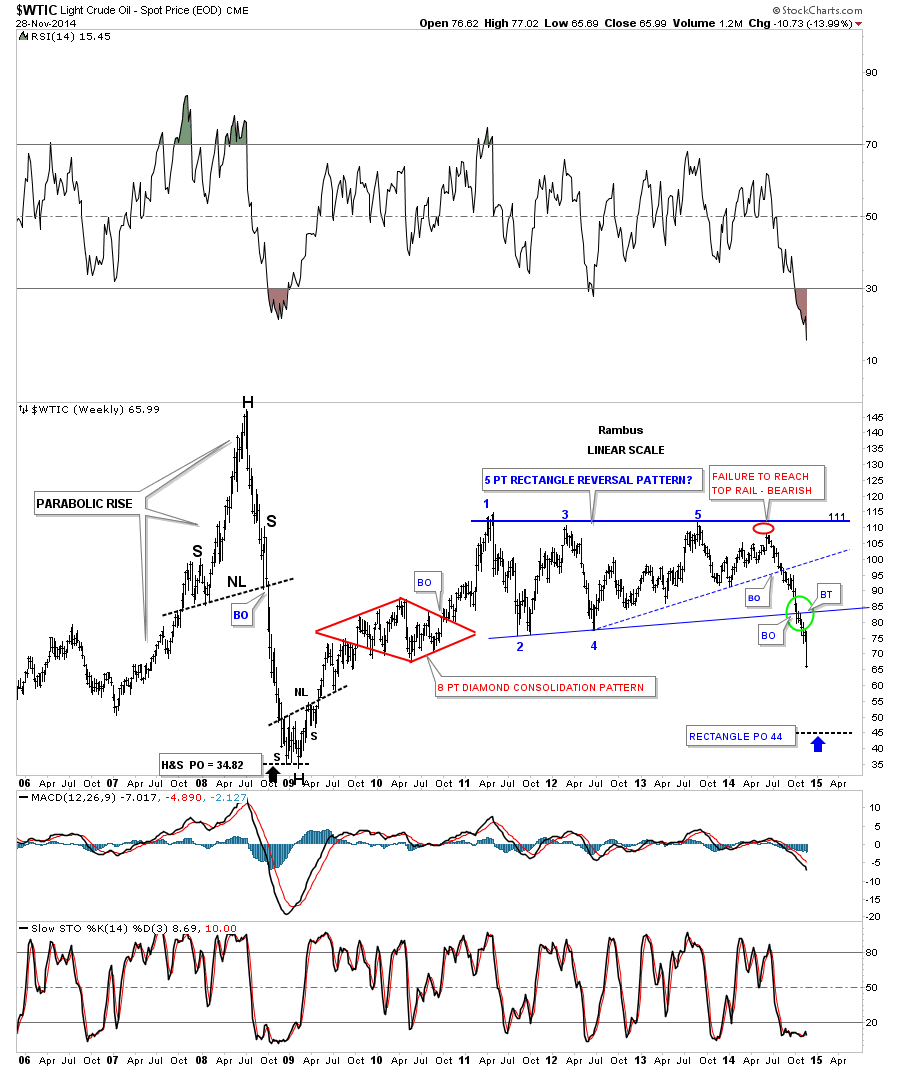 Below is a completely different view for oil that I had been following for years when the neckline became apparent. Note how many touches that neckline has. You can also see the breakout and backtest of the neckline that has led to our most recent impulse move lower. If you look to the left side of the chart, and the rally off of the 2008 low, you can see there really isn’t very much in the way of support as this decline unfolds. It’s possible at some point during this impulse move lower we might see some type of consolidation pattern form that will probably show we’re at the halfway point in this major decline. 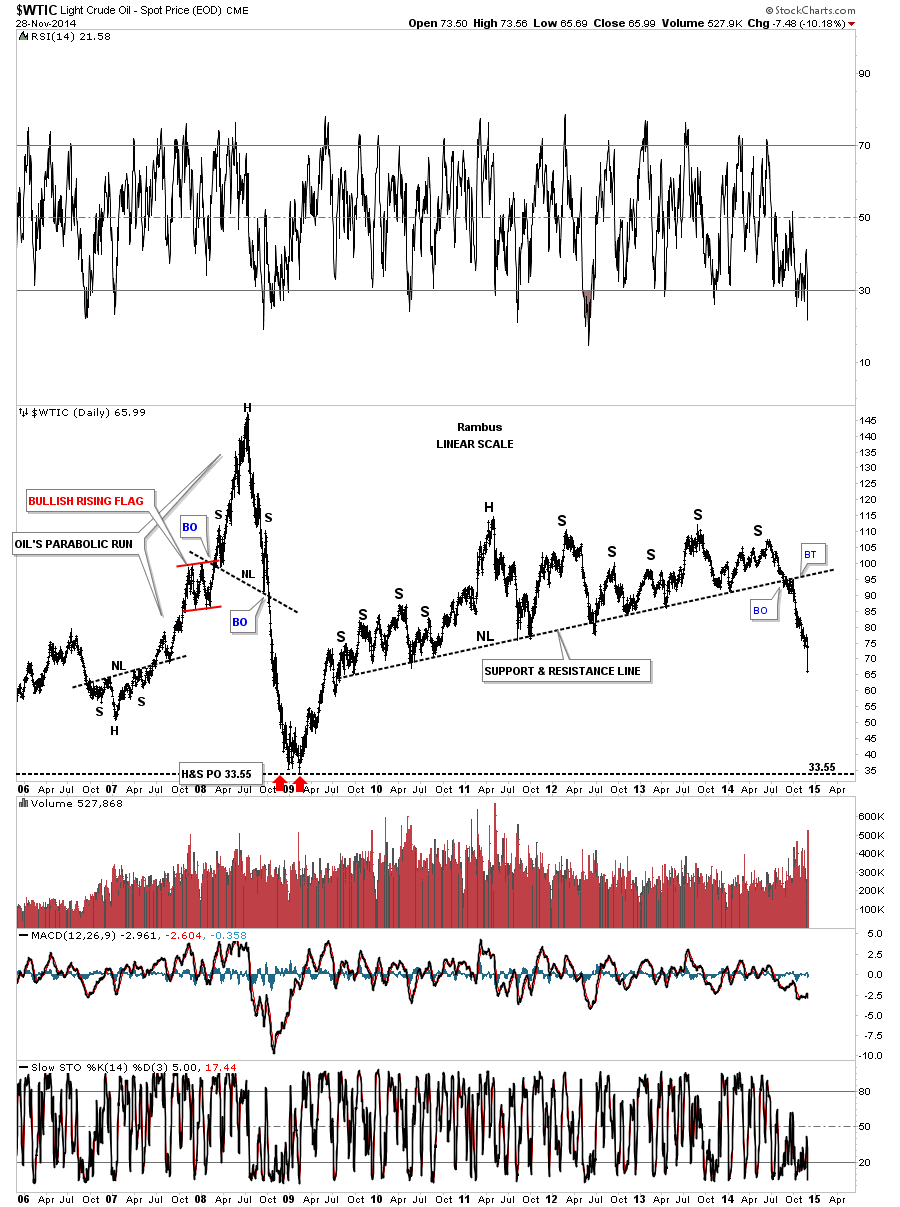 I’ll let this chart speak for itself. 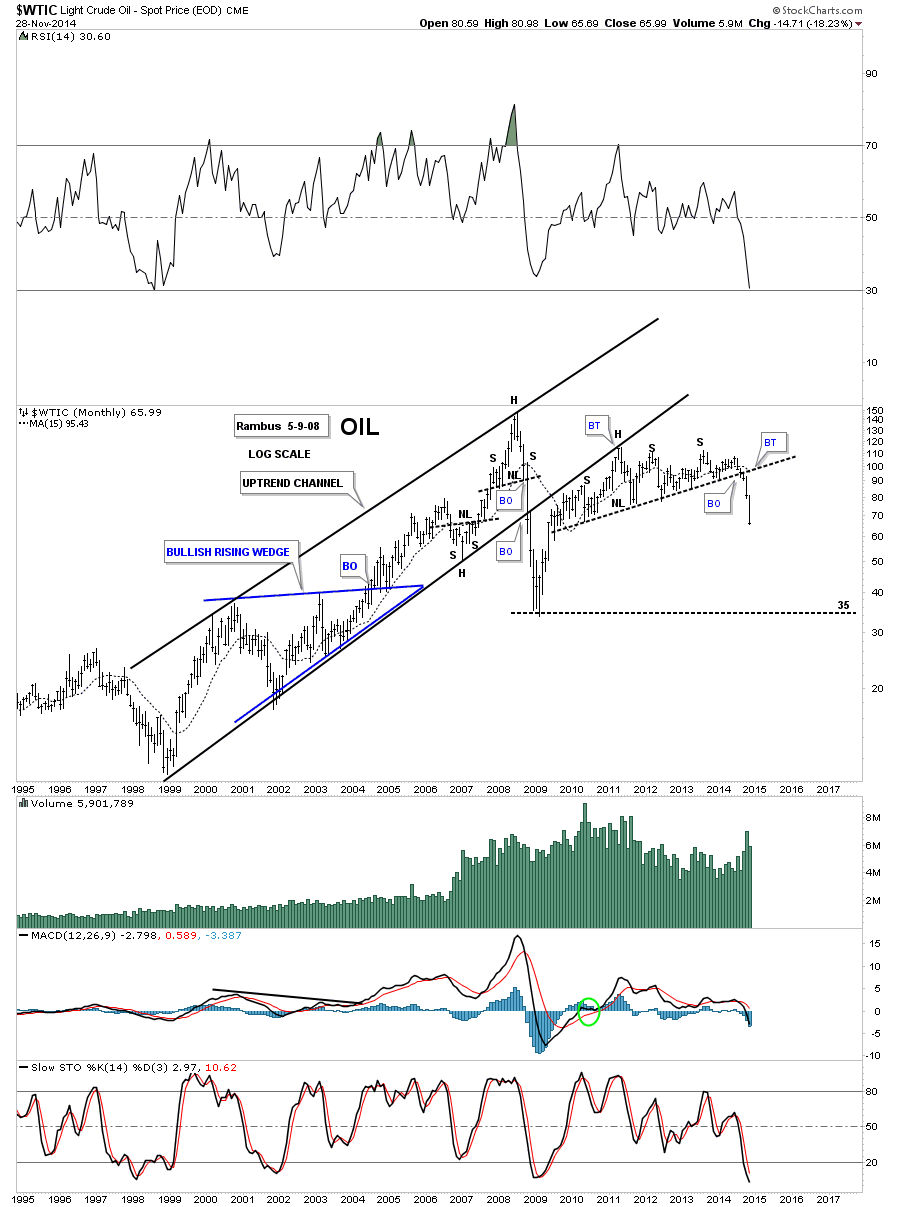 It’s been awhile since we looked at the GASO chart that is following in oil’s footsteps. Nice breakout today of an eight point bearish falling flag. 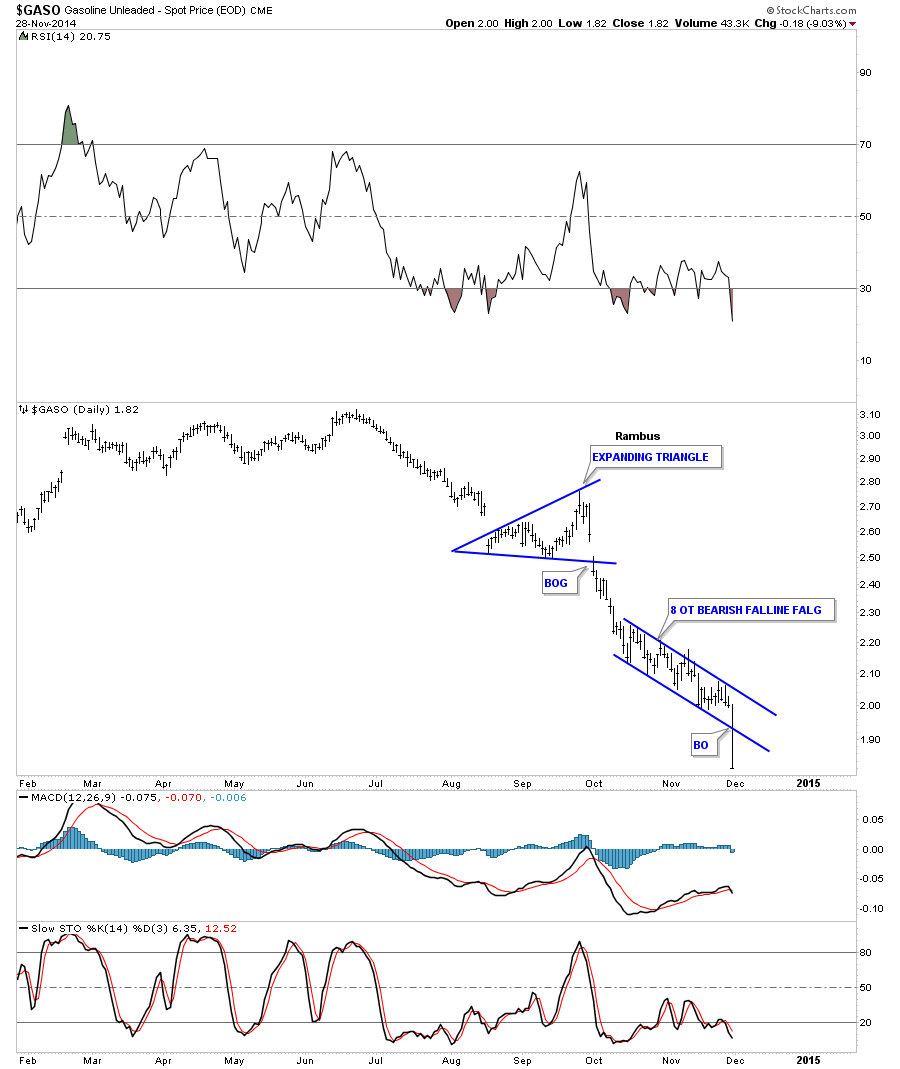 When Gaso broke out from the big five point rectangle reversal pattern I got a price objective by measuring the height of the big rectangle and added it to the breakout point that gave me a price objective down to 181 where the price action is closing in on the bottom rail. Normally this would be a place to look for a bounce of some kind maybe setting up a POP and DROP scenario. Oil will probably be our guide. If the price action gaps the bottom rail that will tell us Gaso wants to go down faster than what most expect. We’ll just have to watch the price action down at this 180 area and see how Gaso interacts with the bottom rail. Note the reverse symmetry that took place as Gaso was coming down vs how it went up in the 2010 – 2011 rally, red arrows. 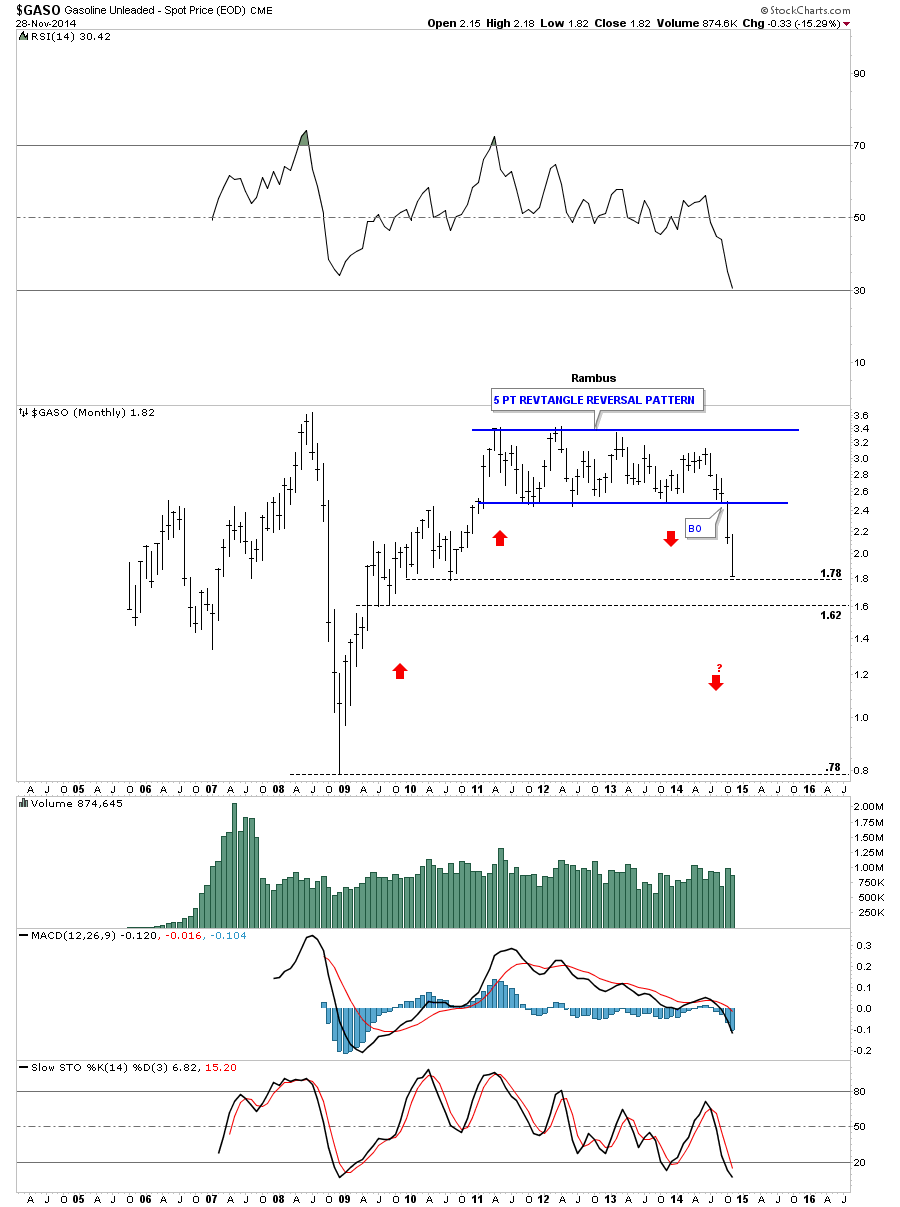 Editors Note : I note that there is gnashing of teeth all over the net regarding this Energy Move …WHO could ever have seen this coming ?

One Last Chart  Notice the Date Dec 6 2012  and Especially Notice the Price Objective (PO) …NOW this is playing out  2 Years later . Patience is not for Sissies .. 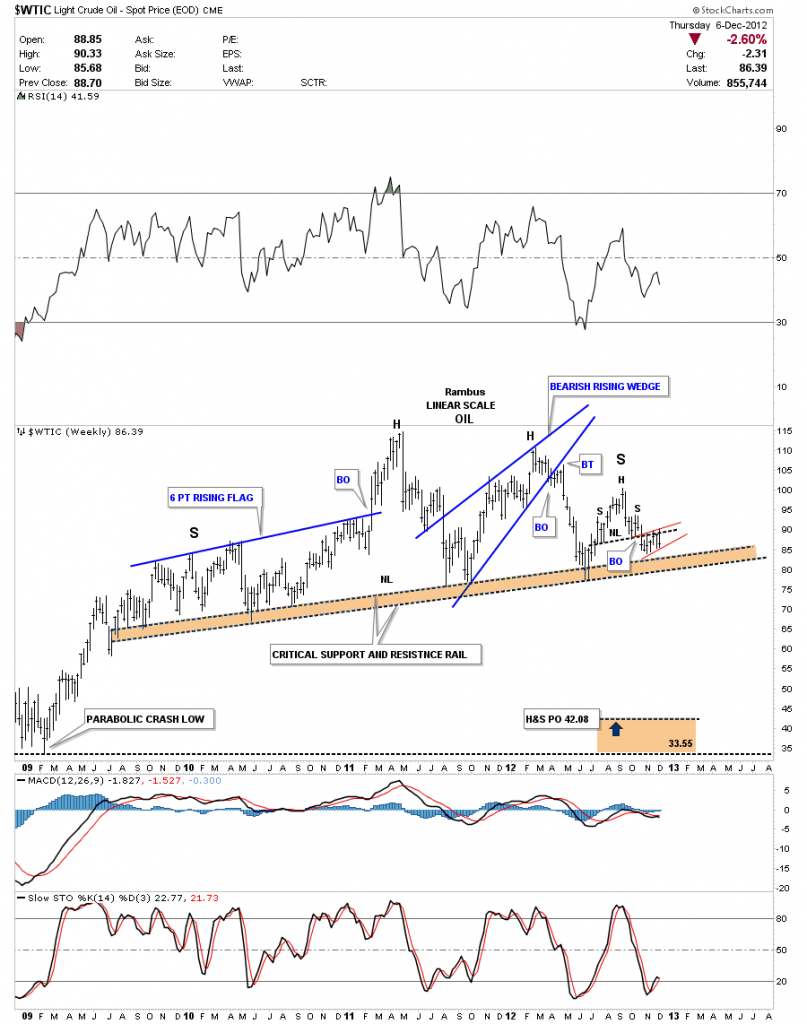 I wonder if the Leaders at OPEC or Vladimir Putin read Rambus Friday Nite Charts and hedged .